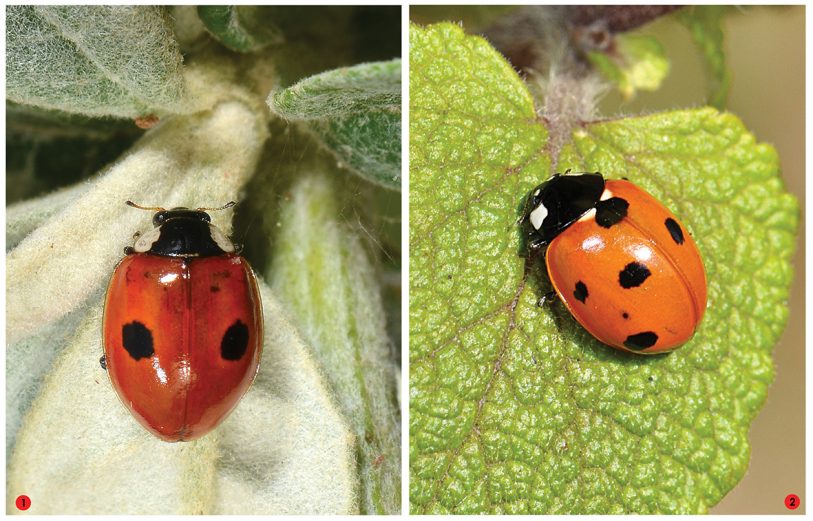 This month, ladybirds are out and about again after having spent almost six months in hibernation hidden under bark, among leaf litter, or sometimes even in houses. Ladybirds are named after the Virgin Mary (‘Our Lady’), and are also known as ‘Ladybugs’. In British English, ‘bug’ was replaced by ‘bird’ in the 1700s, most likely due to negative connotations of the word ‘bug’ at the time. Neither name is particularly accurate, because these charismatic little insects are, in fact, beetles (with the typical chewing mouthparts, hardened forewings as well as larval and pupal stages), not bugs (which have piercing-sucking mouthparts, soft or part-leathery forewings and do not undergo complete metamorphosis).

There are 47 species of ladybird in Britain, but many of these are quite drab and difficult to recognize as such. Only 27 species sport the bright, spotty colours commonly associated with their name. Among these colourful species there is much variety, with some being yellow or orange and some having white spots, not black. A few have even reversed the colour of their background and spots, being mostly black with red spots instead of the other way around. 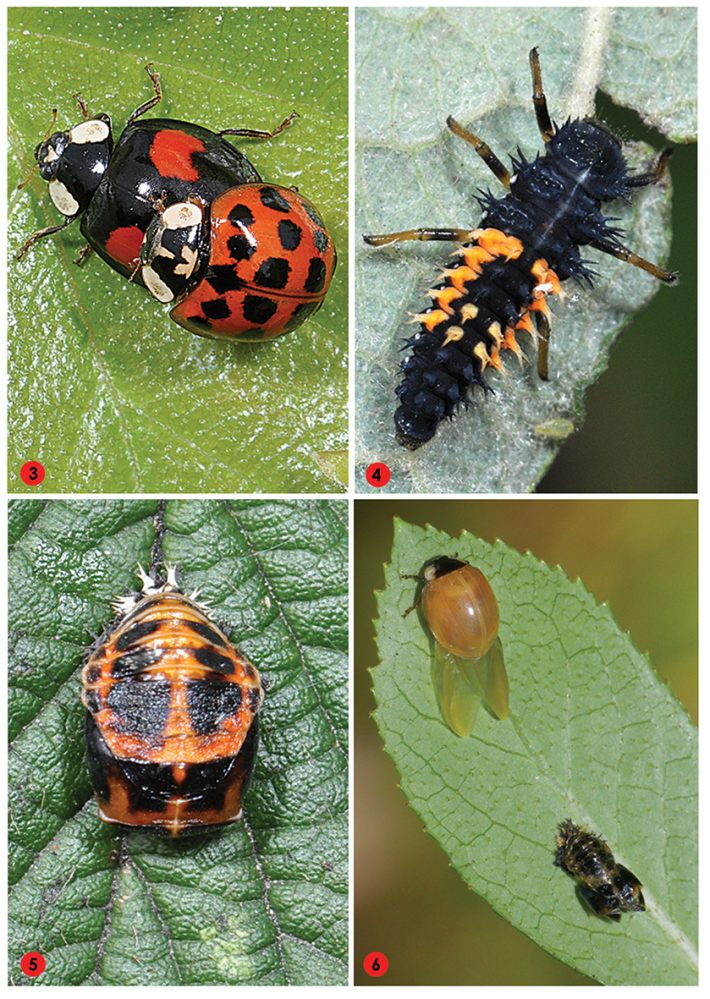 The purpose of these bright colours is to protect the beetles by informing potential predators that ladybird blood contains distasteful and toxic chemicals and that they are therefore better left alone. When threatened, a ladybird’s first re-action is to tuck its legs and head in tightly and let itself drop to the ground. If this fails, it will then release droplets of its pungent yellowish blood from its leg joints, hoping that this ‘taster’ will convince the attacker that it does not make a good prey item. Releasing a small amount of blood like this does not harm the ladybird, and the strategy gives it a good chance of survival. Even though some of the chemicals in ladybird blood are toxic, they are not dangerous to people if a little bit of blood happens to get on the skin, as can happen when one inadvertently startles a ladybird when picking it up for a closer look. There have been very occasional reports of mild allergic reactions as a result of repeated exposure to large quantities of defensive secretions though, so a quick rinse or wipe may be a good idea just to be on the safe side.

The two most frequently en-countered ladybird species in Britain are the 2-spot and the 7-spot Ladybird. Both species are easily recognizable in their typical forms illustrated in photos above 1 and 2, being red with the relevant number of black spots, with the 2-spot being much smaller than the 7-spot. The 2-spot Ladybird occasionally occurs in some less common colour forms with larger amounts of black. Contrary to popular belief, the tiny 2-spots are not young 7-spots with more growing to do, they are fully formed adults in their own right. Both 2-spots and 7-spots feed primarily on aphids and are comfortable in habitat managed by humans. With their tremendous appetite for their little green, black, brown or pink sapsucker prey of which they eat several thou-sand in their year long lifespan, they undoubtedly deserve their reputation as gardeners’ friends.

Not all ladybird species feed on aphids, though. Some prefer different kinds of small insects and a few are vegetarians, feeding on mildews or plant leaves. Most ladybirds are partial to nectar, especially when their primary food source is running low. In this situation particularly, both adults and larvae of many species are also quite prepared to feed on the eggs, larvae and pupae of other lady-birds, of different species as well as their own. Some species are known for quite regularly starting off their lives with an act of fratricide, eating an as yet un-hatched sibling as their first meal as soon as they themselves have emerged from their egg.

The ladybird probably best known for its bloodthirsty habits is the non-native Harlequin Ladybird, which has received a lot of media attention in the last few years because it has been spreading rapidly across Britain over the past decade. It is an exceptionally successful species because it is not picky in its choice of habitat or food source, which gives it an advantage over the more specialised native ladybirds. In many places it is already becoming more common than the natives, and there are concerns that some of the less common species may be replaced entirely by the newcomer. It has been becoming increasingly common in and around Swansea as well.

The Harlequin Ladybird is a very variable species with a number of colour forms. The three most common ones in Britain are an orange/red form with numerous (most often 15-21) black spots and two slightly different black forms with two or four large red spots. Photo 3 shows a mating pair with a male of the red form (var. succinea) and a female of one of the black forms (var. spectabilis). A large (6-8 mm) ladybird with either of these patterns, when found in a garden or urban area, is most likely a Harlequin. In the autumn, Harlequins are particularly drawn to houses for overwintering and can turn up indoors in some numbers, using scent to attract more of their kind to where they are congregating.

But before hibernation is on the cards again, all ladybirds have a busy year ahead. Over the next six weeks or so they will feed as much as possible to regain their strength after their long winter fast. The females in particular need to eat well, because they are getting ready to produce their eggs. They lay their tiny, oval, yellow eggs in clusters of up to 50 on a plant not far from where aphids are feeding. A female can go on laying eggs every day for a couple of weeks. A few days after the eggs have been laid, the larvae emerge. They look very different from adult ladybirds, with obvious legs and a long, pointed body. They also differ from adults in colour, with the larvae of many species being mostly black or grey with only a few coloured markings. The larvae of the Harlequin Ladybird stand out by having rows of particularly sturdy spines on their backs, which are already clearly visible on the young larva in photo 4. Ladybird larvae feed voraciously throughout the summer, growing rapidly and moulting a total of three times in the process (the body covering of ladybirds, like that of all other insects, does not stretch as they grow, but instead needs to be shed and replaced by a larger version at regular intervals). 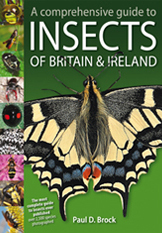 By late summer they are ready to pupate and transform into adult beetles. This is a vulnerable period because as a pupa they are unable to move. Therefore, pupae are often brightly coloured to deter predators during this critical time. The Harlequin pupa in photo 5 shows these bright colours, and the rolled-up spiky final larval skin is still visible at its rear end. If all goes to plan, an adult beetle will emerge after about a week. Initially, until its wing cases have fully hardened, a newly emerged ladybird is pale yellow, no matter what colour it is ultimately going to be, which can cause some confusion when one is trying to determine the species. The newly emerged individual in photo 6 is in the process of extending and hardening its hind wings as well as hardening its wing cases. Within a day or so its colours will have developed and it will be ready for action. It will spend the rest of the summer and early autumn feeding as much as it can to build up its reserves ready for the long winter ahead. If it manages to survive until spring, it will become the proud parent of another generation of these magnificently multi-faceted little beetles.

His latest bestseller A comprehensive guide to Insects of Britain & Ireland (Pisces, 2014) covers more than 2100 species and has been reprinted in 2015: www.naturebureau.co.uk /bookshop/a-comprehensive-guide-to-insects-of-britain-and-ireland-detail, or call 01635 550380.