All photographs by Liz

Last month LIZ visited Machu Picchu in Peru. This month  she continues her travels to Lake Titicaca and discovers its floating islands. Lake Titicaca is world renowned as the area where Thor Heyerdahl first noted the archaeological and anthropological evidence that inspired his legendary Kon Tiki expedition 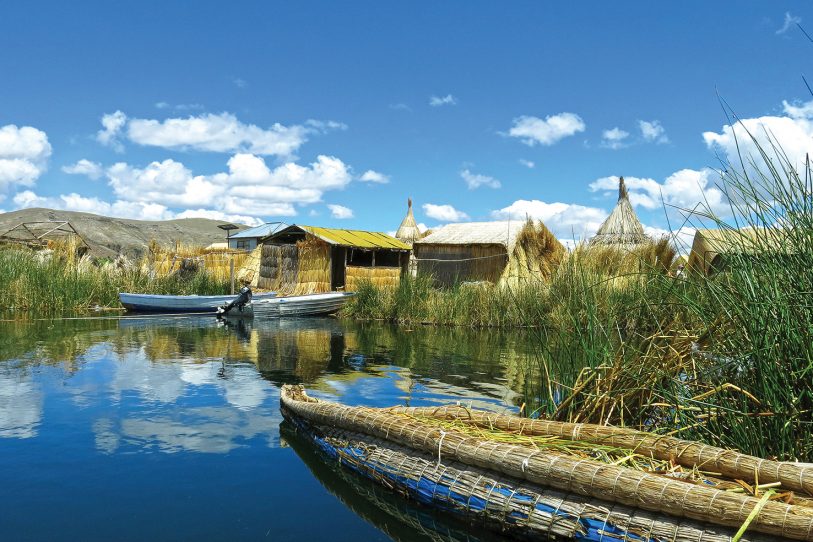 Lake Titicaca is situated on the border of Peru and Bolivia in South America. The town of Puno sits on its shores, and it was from here that I boarded the small boat that would take me out, through the tall reed beds to the floating islands of the Uros people. The Uros are a small tribe who chose to live this somewhat unusual way of life hundreds of years ago – probably to isolate and protect themselves from aggressors.

Beneath the imposing mountains of the Andes, on the world’s highest navigable body of water (3,811 m (12,500 ft. above sea level) and the largest freshwater lake in South America several hundred families still live amongst nearly forty islands.

Anchored to the lake bed, which is only 4m below at this point, the islands are made from the buoyant totora reeds. These range from four to eight feet thick, and as the reeds disintegrate from the bottom, the inhabitants add more to the surface, hence the springy feel under foot. Reeds are used in the construction of their dwellings, for boats and to make craft ware which they sell to visitors. They are also a food source as the tip is edible, tasting like hearts of palm. 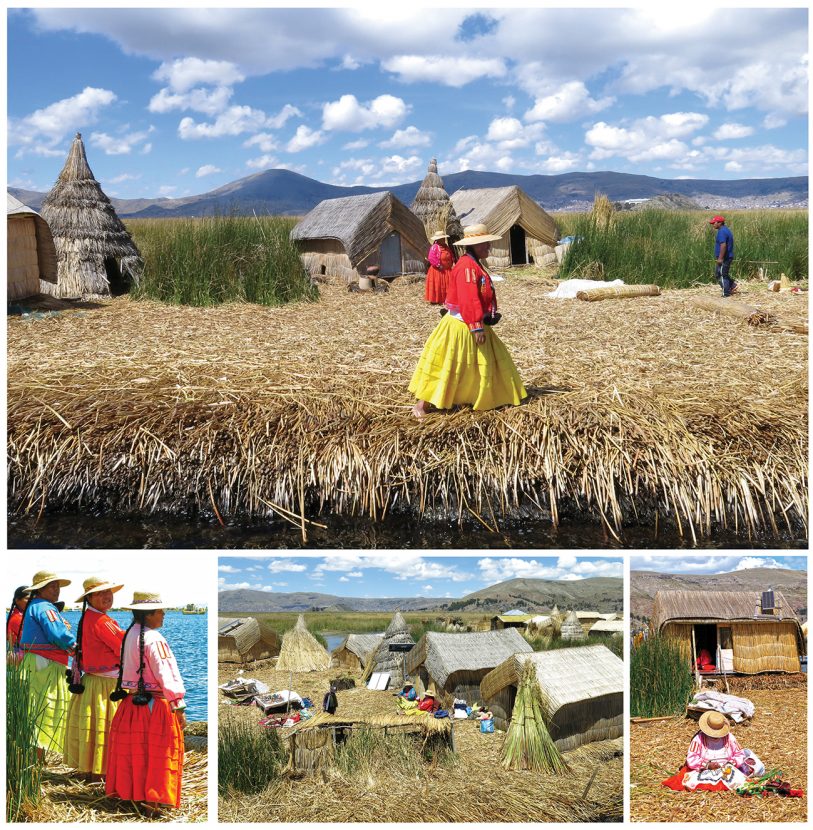 Honey coloured dwellings, some square some conical, sit on top of the malleable surface. Stepping on to an island was quite precarious; I felt slightly unbalanced as water edged through the reeds under my feet, though towards the middle it was a lot firmer and I was reassured I wasn’t going to sink.

I was greeted by women wearing vibrant shades of red, orange and yellow boleros skimming the tops of flowing skirts, their dark plaited hair hanging over their shoulders beneath straw hats which shielded their faces from the dazzling sun.

Four generations of the same family live together on one island. In a doorway a grandmother sat ab-sorbed in her task of weaving, on top of the carpet of reeds a group of ladies were sitting sewing. A young mother carried her nine month old baby boy wrapped in folds of cloth on her back.

Inside the huts that served as their living quarters I could see a mattress and blankets, while outside earthenware cooking pots were balanced on top of stones. However, there were signs of modern day living, as attached to the roof was a solar panel and tethered behind the island, motor boats that were used to gather fresh reeds and for trips to the mainland. 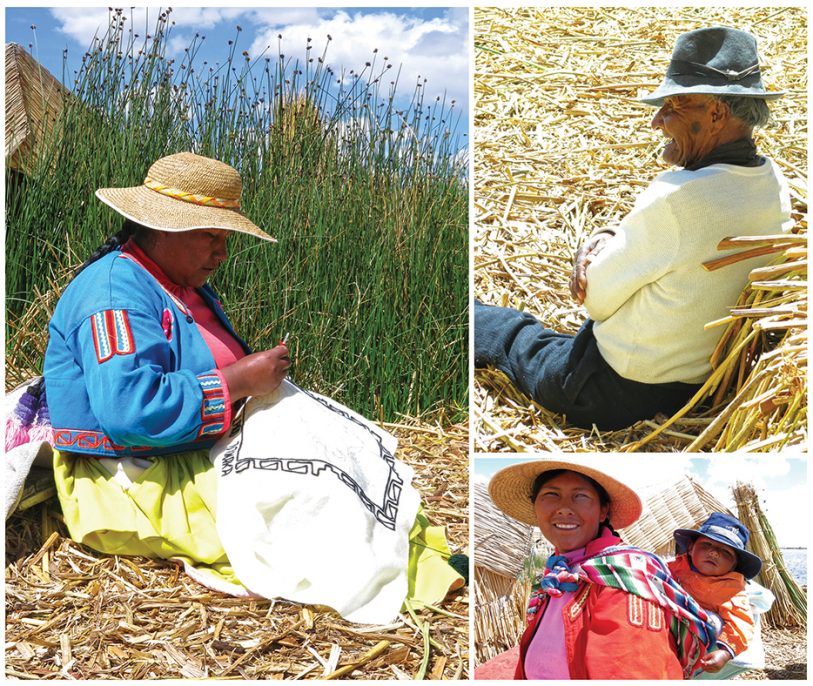 The men fish and sell their catch in the markets in Puno; they also catch shore birds and ducks for eggs and food. Tourism is another source of in-come; you can ride in two tiered traditional totora reed boats, which were once used by the locals for fishing. On the larger islands there is a school and also a shop where you can get a Lake Titicaca stamp in your passport for one Sol (about 20 pence).

As we motored onto our next destination, the Island of Amantani (population 3,500), approximately three hours away the vastness of Lake Titicaca became apparent.

As the boat docked, we were greeted by a group of the villagers wearing traditional dress. The raven headed ladies were clothed in black shawls and skirts, which had intricately embroidered patterns on their edgings. Their white blouses were delicately stitched with pink and blue flowers. In contrast, the men folk were more sombrely dressed in black trousers and waistcoats over a cream woven shirt – all topped off with a Trilby hat.

I waited with the rest of my group for my name to be called – I was to join one of the families for an overnight stay on the island. Alexandro, head of the community and his wife Grisella were my hosts. Her weathered face and shy smile radiated warmth and I knew I would be a welcome visitor in their home. On her back she carried a hefty cloth bundle containing a bale of straw. I followed in her footsteps along the stone paths leading uphill from the harbour – fortunately she stopped on several occasions to adjust her load which gave me a chance to catch my breath as I was certainly feeling the effect of low oxygen levels at this altitude.

Grisella and Alexandro’s home was two storeys high. My room was on the upper balcony; a window looked out onto the deep blue waters of the lake. It was simply furnished with a table, chair and a wooden bed topped with plenty of blankets as the night would be cold.

Downstairs, a fire crackled in the stone grate. Lunch was bubbling away in blackened cooking pots. The room was sparsely furnished with a cabinet to store dry goods, two benches with woven cushions and a table covered with a cream and brown cloth. Grisella served me tea made with freshly picked mint from their garden. Lunch was a locally grown grain called quinoa (now a very chic urban ingredient in many fashionable restaurants and homes) served with a vegetable soup, followed by a plate of potatoes – some sweet tasting – oca – a root vegetable similar to carrots, topped off with a chunk of a fried halloumi-type cheese. I had to mime how delicious the meal was as she didn’t speak Spanish, only Quechua, an indigenous language of Peru.

Following such a hearty meal, I decided a walk was in order and I followed the ancient trails that traversed the island. Built into the mountainside were terraces of potatoes, broad beans and lush early corn. Two young boys passed by returning home after working in the fields; wooden tools strung across their backs. I passed ladies sitting against dry stone walls, knitting the afternoon away, whilst their handful of sheep freely grazed the stubby green pastures; there are no dogs here to worry them. I felt very far removed from my normal daily existence and was captivated by the peace of the rural landscape. Amantani did feel like an island lost in time. 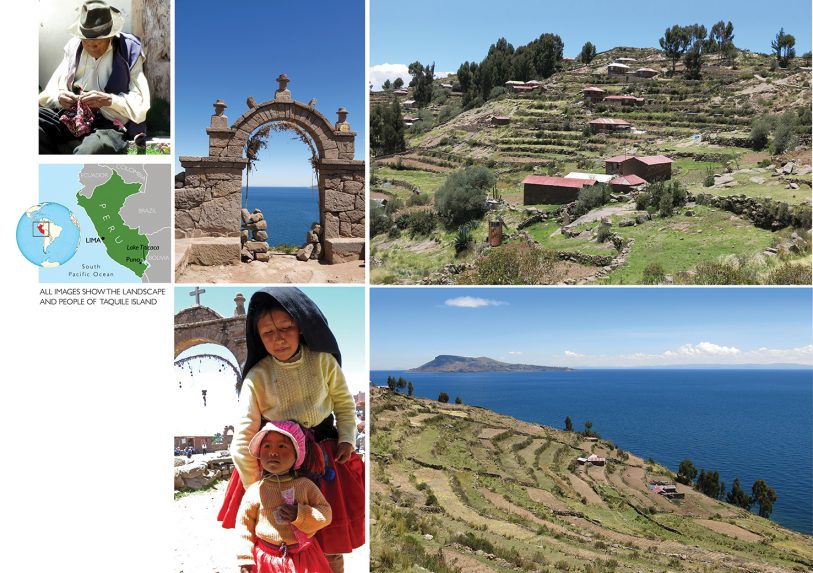 That evening the villagers had organised a dance at their com-munity centre for the visitors, with a helping hand from Grisella I swapped my jacket and fleece for traditional dress – all be it with trousers and hiking boots beneath. Alexandro proudly introduce-ed me to his grandson who played the pan pipes with a band of local musicians. It was a fun evening, though I had trouble keep-ing up with the dancing as the music gathered momentum and we linked hands and zigzagged across the room.

The next morning I awoke to a cloudless blue sky and after a breakfast of pancakes, and big hugs from tiny Grisella, Alexandro accompanied me back to the boat, for yet more farewells and hugs. My visit to Amantani was a unique experience although it may have been brief, the gentleness and kindness of the people will stay with me forever.

My last stop before returning to Puno was a visit to the remote neighbouring island of Taquile (population of around 2,200). At 4050m above sea level at the highest point it was a slow steady trek to the top through a series of stone archways.  It was very similar to the island of Amantani with traditional terraces and adobe clay homes.

The island has a strong tradition of weaving, which dates back to the Inca and Colla civilisations. Brightly coloured textiles are hand woven by the women; they weave calendar waistbands which depict the history of the community and annual cycles of agricultural activities. On Taquile it is the men who are the knitters, their status in the community and whether they are married or single is instantly known by the colour of the knitted hat they wear, red for married men, predominantly white with a band of red if single.

The artisan traditions, legends and myths of the indigenous villagers of Lake Titicaca have survived for thousands of years, deep-rooted family ties, living off the land and the remoteness of location have meant thriving communities maintain their ancient ways of life whilst embracing modernity.