Just ring the lovely people there on 01792 516820 to check availability. Killay Library receives an advance list of the titles to be reviewed in each issue of TheBay magazine and do their best to pro-cure the books for you, no matter how ‘obscure’ my selection is. 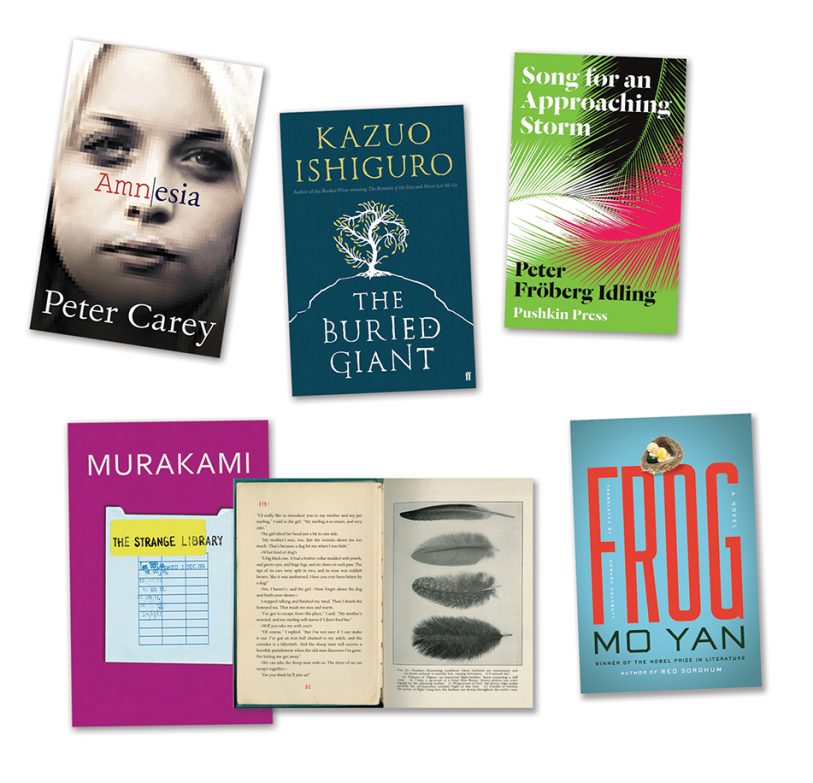 Song for an Approaching Storm

The Buried Giant by Kazuo Ishiguro

The international literary world was saddened by the death of Nobel Literature Laureate Guenter Grass whose memoir ‘The Box – Tales from the Darkroom’ was reviewed in this column two years ago. Grass was famous for his sophisticated satirical novels criticising Nazi Germany – he shocked the world when he revealed in an interview in 2006 with the German newspaper Frankfurter Allgemeine that he had been an SS officer in the Nazi army.

Grass was a prolific essayist, poet, playwright and novelist. His most famous works include The Tin Drum, The Flounder, The Rat ….I particularly recommend Too Far Afield (Faber & Faber £12.99) a deeply analytical and erudite exploration of what Germany’s political reunification means in social terms today.

Lovers of contemporary literary fiction in the English-speaking world have enjoyed the benefits of a huge selection of novels by acclaimed international writers translated into English. Regulars of this column, know that works translated from European and other languages are of very high literary quality and therefore feature frequently in any review section, from the Times Literary Supplement to the lowliest local tabloids.Regardless, I am always on the lookout for the best of British fiction written in English and depend on solidly domestic publishers like Faber & Faber to bring forth the finest from our best-known authors writing in English.

Every novel written by Australian Peter Carey jostles for position in literary award short-lists and with good reason. Booker winner Carey delivers unfailingly strong plots, unusual settings and vigorous original storylines. His last novel The Chemistry of Tears (reviewed in TheBay 2012) was set in London and Germany telling the story of the legendary clockwork automaton The Swan.

Carey’s latest novel Amnesia makes a dramatic shift to high technology cybercrime and is set entirely in Australia. Amnesia brings togeth-er the topical and frightening world of hackers and radicals when the young Australian protagonist declares cyber war on the USA activating her Angel worm that unlocks thousands of prison doors in both countries. The fear of this new type of aggression is universal, and we read on agog to find out how such malware could affect all of our lives.

In complete contrast, in his new novel The Buried Giant, Kazuo Ishiguro, celebrated author of The Remains of the Day and Never Let Me Go takes us back into the age of ancient Britons, a narrative of haunted villages, hoary secrets, Arthurian knights and hapless villagers.

The protagonists, an elderly couple Axl and Beatrice, tiring of life in their restricted communal quarters, set off on a journey to visit their son.

Their memories of his whereabouts are vague; they suffer from the effects of a memory swallowing dragon who lives in a far off cave. Ishiguro captures your attention with his strange and other worldly narrative and the mystique of his poetic style. The Buried Giant has the timeless flavour of Jim Crace’s Harvest, the finest contender for the Booker prize 2014, an equally troubling and evocative tale of forgotten times, forgotten climes.

Song for an Approaching Storm

Swedish journalist and novelist Peter Idling’s engrossing and very informative novel of the stirring events taking place during the horrors of the Pol Pot regime in Cambodia was reviewed in this column last year, and has now been reissued in paperback by Pushkin Press to commemorate the 40th anniversary of the brutal Khmer Rouge  revolution. Peter Idling’s Song for an Approaching Storm is set over thirty days in Cambodia, and is a stirring saga of the tensions and betrayals of three powerful individuals at the forefront of a nation on the brink of disaster. Highly recommended.

Haruki Murakami is easily the finest contemporary Japanese writer, world famous author of the three book jeremiad IQ84, and most recently of the novel Colourless Tsukuru, all of which have been reviewed in this column. My own analysis of his work reads: “His novels are abstract, his themes mystical, his style lyrical. His work celebrates the supreme aesthetic that can be achieved with the written world.”  To this analysis we can add the words ‘whimsical, playful and charming’ which describe his latest novella, The Strange Library, to perfection

The Strange Library is a playfully designed book. The front cover bears a stamped library docket-card; the pages are multicoloured, ranging from saffron to sepia, some depicting simulated water-damage; the page numbers are quaintly rubber-stamped. The book is peppered with delicious illustrations, lithographs and old photographs and tells the story of a schoolboy who visits the library, asking, at a whim for a book about tax collection in the Ottoman Empire.

He is lured into an underground labyrinth, given his books and locked into a room, visited by the sheep-man and the beautiful girl who feed him fresh doughnuts. He is kept prisoner with the promise that in due course, his brain will be eaten.

The Strange Library could be described as a parable, a fairytale or a good trip. Whatever you might call it, it is a work of enormous charm moving from pure whimsy to a dark denouement.

Nobel Laureate (2012) Mo Yan is one of the best known contemporary Chinese novelists, and one of the most criticised. In this column I have reviewed his earlier novels POW! and Big Breasts, Wide Hips, noting how, despite several narrative opportunities, Mo Yan failed to introduce any judgemental comment while depicting every horror perpetrated by the leaders and the petty officers of rural Communist China. Such lacunae are glaringly obvious and not just the grumblings of learned critics. Mo Yan has been internationally condemned by distinguished critics and writers (including Salman Rushdie) for failing to speak out against censorship in China and for refusing to join the demand for the release of his compatriot and fellow Nobel Laureate Liu Xiaobo who has been incarcerated by the Chinese government for his dissident writing.

Nonetheless, like all his work, Mo Yan’s Frog is compulsive reading. He specialises in obsessive protagonists. In Big Breasts and Wide Hips, the protagonist is obsessive about women’s breasts: in POW!, set in modernday China, our young hero Luo Xiaotong loves meat, winning meat-eating contests and ending up as a meat god.

Frog tells the story of a venerated midwife Gugu in Mo Yan’s home province of Gaomi Township who brings modern medical techniques to dramatically reduce infant mortality. Gugu’s story is narrated by her nephew Wan Zu (Chinese for ‘tadpole’) in a letter to his literary mentor, his Sensei.

Alas, Mao’s government introduces the strict one-child family planning edict and Gugu is required by law to abort babies that exceed the prescribed quota and is under threat of imprisonment if she fails. Government punishment for parents who seek to cheat the law is swift and draconian. Gugu is, as a result, now demonised and vilified for her role as official abortionist.

Mo Yan’s portrayal of rural China and its colourful denizens never fails to hypnotically focus reader interest in this alien world where no amount of brutal official imposition of lunatic laws is able to crush the individuality and the vivid personalities of the people.

Wan Zu’s report ends with a six act play titled Frog that tells Gugu’s story using the folk story rendered by German playwright Bertolt Brecht in The Caucasian Chalk Circle —a legendary dispensation of justice, deciding the maternity of a child, which has its origins in China.

Clearly, we are hindered from grasping the real import of Frog by the translator’s limitations and by our own difficulties in understanding so alien a culture and a people. Regardless, Mo Yan tells a unique and utterly fascinating story that keeps you engaged as you turn every rivetting page. His inability to take a critical stance of his government’s frightful behaviour is perhaps part of his esoteric literary mystique.