Dr ISABELLA BREY’S INSECTS FOR THIS ISSUE ARE CHAFER BEETLES, OF WHICH THERE ARE A NUMBER OF DIFFERENT KINDS… 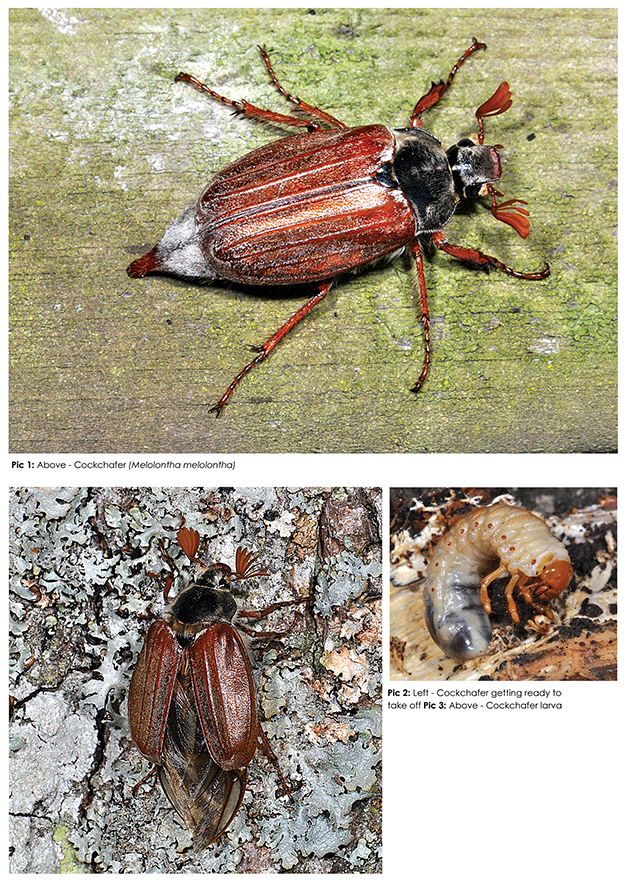 Also referred to as ‘Maybugs’ because they emerge from hibernation this month, Cockchafers will be happily bumbling into lit windows and buzzing around outdoor lights at night for the next eight weeks or so. During this time, these quintessential beetles will be joined out and about by a number of smaller relations, which – although perhaps less conspicuous – are certainly no less beautiful.

Cockchafers are unmistakeable – at a size of up to 30 mm they are one of the largest British beetles, and their chestnut brown, ridged wing cases along with rows of pretty, white triangles running along their sides are their most immediately noticeable features. They also have an unusually pointed – and somewhat menacing looking – tip to their abdomen, but this is entirely harmless and only serves to facilitate egglaying in the females. Closer examination reveals that Cockchafers have very unusual antennae in which the last few segments bear extensions (referred to as lamellae) which can be spread out and folded up at will, much like a fan. The beetle in photo 1 is holding its lamellae partly folded, in photo 2 they are fully unfolded. It is possible to determine a Cockchafer’s gender by means of these lamellae, because male Cockchafers have seven while females only have six.

It is likely that the males have their extra lamella to make it easier for them to detect female chemical attractants (pheromones) in order to locate a suitable mate. Cockchafers only live for around six weeks after they emerge, so time is certainly of the essence. To sustain themselves as adults they feed primarily on oak leaves. However, they will have done most of their eating while they were still larvae, having spent a minimum of three years underground as plump, white, soft-bodied youngsters, happily feeding on roots. By the time they are ready to pupate, Cockchafer larvae are even bigger than the adults, reaching almost 50 mm in length (photo 3). They pupate in late summer. After only six weeks, fully formed adult bee-tles emerge, which remain underground protected from frost and predators until the following spring. 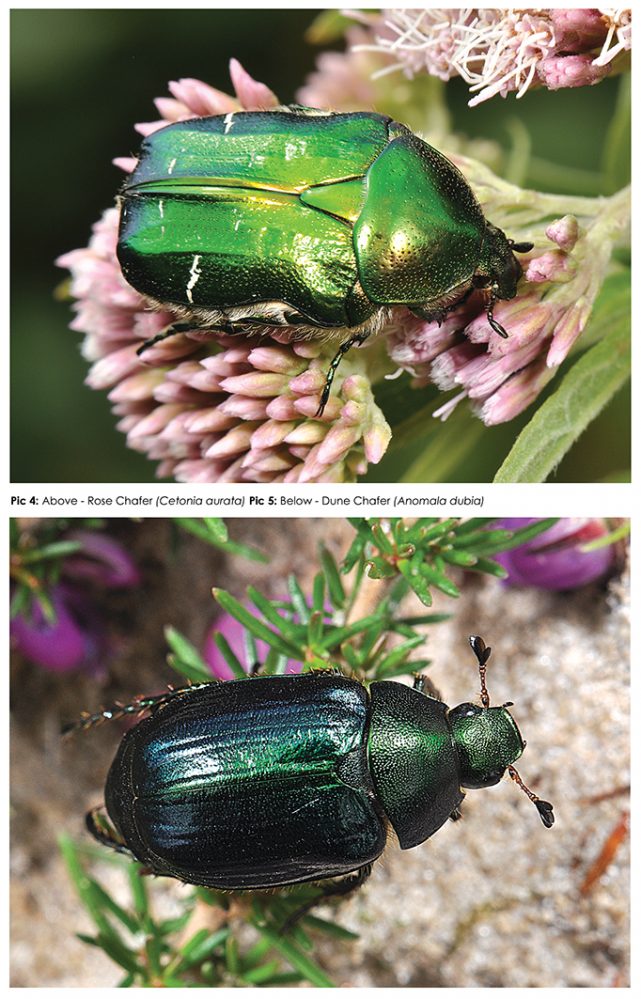 Cockchafer larvae, as well as those of a few other chafer species, sometimes become a nuisance to humans by causing damage, particularly to lawns. The damage can be done both by their own feeding activity as well as by them – inadvertently – causing other animals (for example jackdaws and badgers) to pull up the turf trying to get at their tasty little bodies.

Before the advent of modern pesticides, Cockchafers occurred in very large numbers and were serious economic pests, occasionally causing severe hardship in years of mass flight.

In attempts to control their numbers, they were caught and destroyed in their millions, and both adults and larvae were sometimes even cooked and eaten.

Nowadays they are much rarer and only occasionally cause serious damage, though numbers have been slowly increasing again over recent decades.

There are 15 further species of chafer beetle in the UK, all of which possess the typical fan-like antennae described earlier. The majority are rare and very local in their distribution, but several may well be spotted across South-West Wales over the next few months.

The most striking of these is probably the Rose Chafer (photo 4) which, like the Cockchafer, is large (up to 20 mm) and quite unmistakeable, being a bright, metallic green. It is most active in sunny weather when it visits flowers to feed on pollen and nectar and the occasional petal. It can regularly be spotted along the coast path near St. David’s, feeding on the flowers of bramble, hogweed and rose. Its larvae are very similar to those of the Cockchafer, but they feed on rotting plant matter, never on live roots. As a result of this, they are sometimes found in compost heaps, in which case they should not be destroyed, as they help to break down the com-post, as well as eventually turning into beautiful beetles. 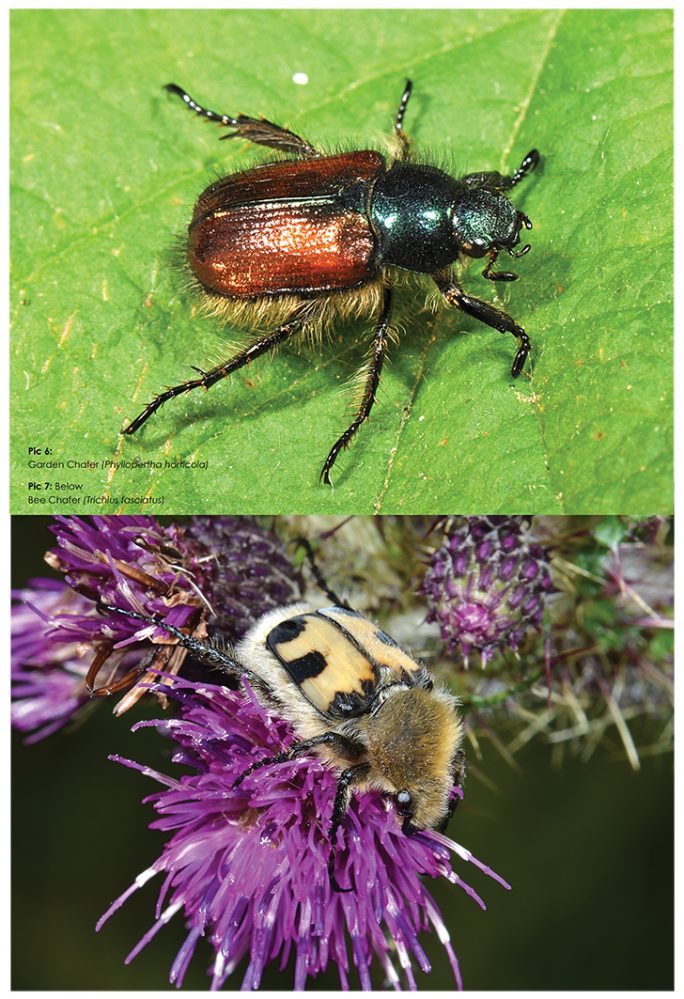 Another bright golden green chafer is the Dune Chafer (photo 5). At a maximum size of 12 mm it is noticeably smaller than the Rose Chafer. This pretty little beetle is quite rare and confined to sandy habitat, but can be found locally at Kenfig Burrows between May and July.

While spotting the Rose and Dune Chafers will most likely require taking a trip, with a bit of luck the Garden Chafer (photo 6) could turn up right on our doorsteps (or rather, on a nice flowerhead in the garden) anytime between late May and July. It looks a little like a miniature Cockchafer but without the pointed tip to its abdomen. Unlike Cockchafers, Garden Chafers only take one year to develop.

A real rarity that can occasionally be seen in the area is the large and striking Bee Chafer (photo 7). It can reach 26 mm and is a bright yellow and black bumblebee mimic. The Bee Chafer’s colours and pattern lead potential predators to believe that it is able to sting, while in reality it is totally harmless. It can be found between May and August on flowers near woodlands where its larvae develop in rotting birch wood. It has a particular fondness for thistle and bramble flowers, so keeping a particu-larly close eye on these when out and about could quite possibly yield an exciting discovery.

So over the next few months, best of luck spotting one or more members of Cock-chafers & Co.!

Ed. I’ve seen Dune Chafers when walking from Southgate to Three Cliffs. Please get in touch if you’ve seen any chafers locally.

His latest bestseller A comprehensive guide to Insects of Britain & Ireland (Pisces 2014) covers more than 2100 species and has been reprinted in 2015: www.naturebureau.co.uk/bookshop/a-comprehensive-guide-to-insects-of-britain-and-ireland-detail, or call 01635 550380