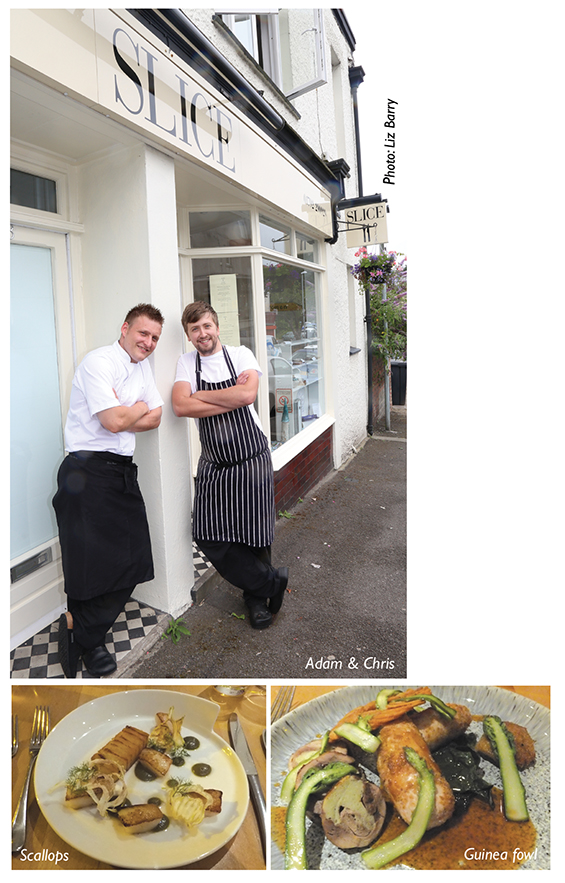 I mentioned last month that there are certain restaurants that I like to reserve for special occasions only. So it was with great excitement that I had the opportunity to visit Slice in Eversley Road again – the last time was over a year ago.

Adam Bannister and Chris Harris took up the mantle of running this quirky little restaurant just over twelve months ago and have continued to develop on the standard set by their friends, the original owners Phil and Helen. Adam and Chris met at catering college in Swansea and started their careers in the Welcome to Town in Llanrhidian. In 2009 Chris joined Stephen Terry and the team at The Hardwick in Abergavenny, closely followed by Adam in 2010.

Since their days at The Hardwick Adam and Chris have worked at AA two rosette and Michelin starred restaurants around the country, so the food at Slice is as special as you would expect of chefs with such pedigrees.

The menu is small, which for indecisive people like me is an absolute delight; just three choices on each of the starters, mains and desserts. An amuse bouche of purple sprouting broccoli soup arrived in a very retro glass coffee cup reminiscent of those used in the Espresso Cafe in the High Street in the 60s.

Steak Tartare doesn’t appear on the menu of many restaurants in Swansea – probably because of over-zealous health and safety issues. I have always been of the opinion that if a chef is happy with the provenance of his beef, he will have no problem in serving it rare or raw. Here we had Veal Tartare – it was an absolute revelation. A freshly minced veal patty served with deep fried sweetbread on a shallot puree with a dainty little onion ring. This was the very first time that

I have ever eaten sweetbreads – not for any other reason than that I had never encountered them on a menu before. Sweetbreads are the thymus or pancreas gland of the calf or lamb – I suspect that this was probably the former. Now that I have tasted them I will be going out of my way to find more. They are creamy and have a very delicate savoury flavour which was perfectly balanced by the crispy outer crumb. We also had the pan roasted scallops with a potato and chorizo terrine and caper dressing – our plates went back to the kitchen all but licked clean.

The main courses again offered us something different, and how refreshing it was to not see the same old, same old. Guinea fowl, now how often have you seen that on a menu in Swansea? To me Guinea fowl tastes a bit like a gamey chicken. Here it was jointed into breast, wing and leg served with pommes Maxim. This was another first for me – made famous by the famous Parisian restaurant, Maxim’s de Paris. Thinly sliced potatoes are tossed in clarified butter and arranged in overlapping circles in a pan and baked until crisp. The lamb Wellington was meltingly tender and was served with a fragrant wild garlic mash – the ultimate in comfort food.

Slice has been number one restaurant out of 521 in Swansea of the on-line review site Trip Advisor for some time and, in my opinion deservedly so. It has a set price menu of £35 for three courses which represents terrific value for money if you consider the level of attention given to each dish and the quality of the produce.

As it only has sixteen covers, booking is essential and make sure that you do so far enough in advance to avoid disappointment.