Bird of the month: 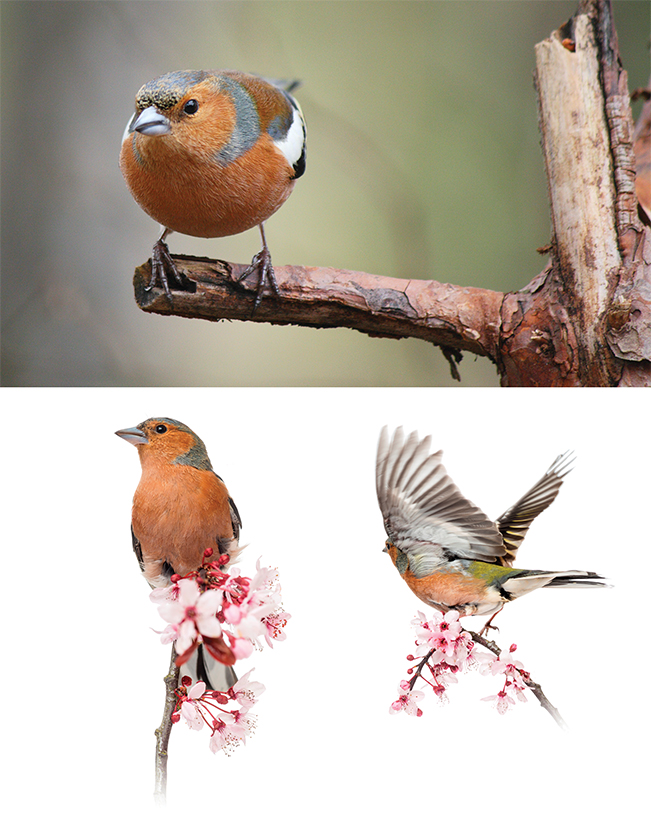 Welcome to this month’s Bird Watch. I’m one of two volunteer Ambassadors for the British Trust for Ornithology’s (BTO) Garden BirdWatch Scheme in South Wales. Each month I introduce you to a bird or other animal that you might see in your garden.

By now the breeding season is really getting going and the familiar song of the Chaffinch may be heard in gardens, farmland, woodland and other habitats. The song is delivered by a male seeking to define his breeding territory. Most of the Chaffinches breeding locally will be resident birds that have been present throughout the winter, with birds from elsewhere in Europe – which wintered here – now long departed. During the breeding season Chaffinches defend their territory and their main food source, namely invertebrates (in the winter Chaffinch mainly eat seeds and other plant material). You may see a Chaffinch giving a ‘forward threat’ display to other birds in your garden, whereby it crouches and flutters its wing with the neck extended and an open beak, visually stating.

“I’m strong, keep away!” The male’s plumage is colourful – it has a chestnut back and pinkish-orange underside, a blue crown and nape, and distinctive double white bars on the wings. The buff- brown female is darker above than below and has pale wing bars. The Chaffinch’s white outer tail feathers and wing bars are particularly obvious in flight in both sexes. Recently fledged Chaffinches will peck at anything which contrasts with the ground, gradually learning what is edible and developing a preference for the largest seeds that can comfortably be handled.

The Chaffinch is susceptible to the Fringilla papillomavirus disease which produces growths on the foot or bare part of the leg. These can vary in size from a small nodule to something that covers the whole leg and they may last several months. Instances of disease can be reported to Garden Wildlife Health (gardenwildlifehealth.org).

In the same way that we have different dialects, so does the Chaffinch!

After the Wren, the Chaffinch is the 2nd most numerous species of bird in Britain, with an estimated 5.4 million pairs.

The Welsh name is Ji-binc.

How to attract them to your garden: although largely insectivorous at this time of year, Chaffinches will eat seeds, such as sunflower hearts, but are more likely to eat from the ground than from a feeder.

Conservation status: Green (no cause for concern).

Garden BirdWatch data show that Chaffinches are spotted more often in Welsh gardens than in other parts of Britain, with a 10% difference.

Make Your Garden Count! If you enjoy watching the birds and wildlife in your garden why not take part in BTO Garden BirdWatch – the largest year-round survey of garden birds in the world?  Please contact me for a free enquiry pack or to book a talk (Swansea and surrounding areas). Happy Garden Bird Watching!