LEMON BALM IS AN UNASSUMING HERB WITH AN UPLIFTING LEMONY SCENT; PHYSICIANS AND BEEKEEPERS ALIKE HAVE LONG KNOWN MELISSA OFFICINALIS. 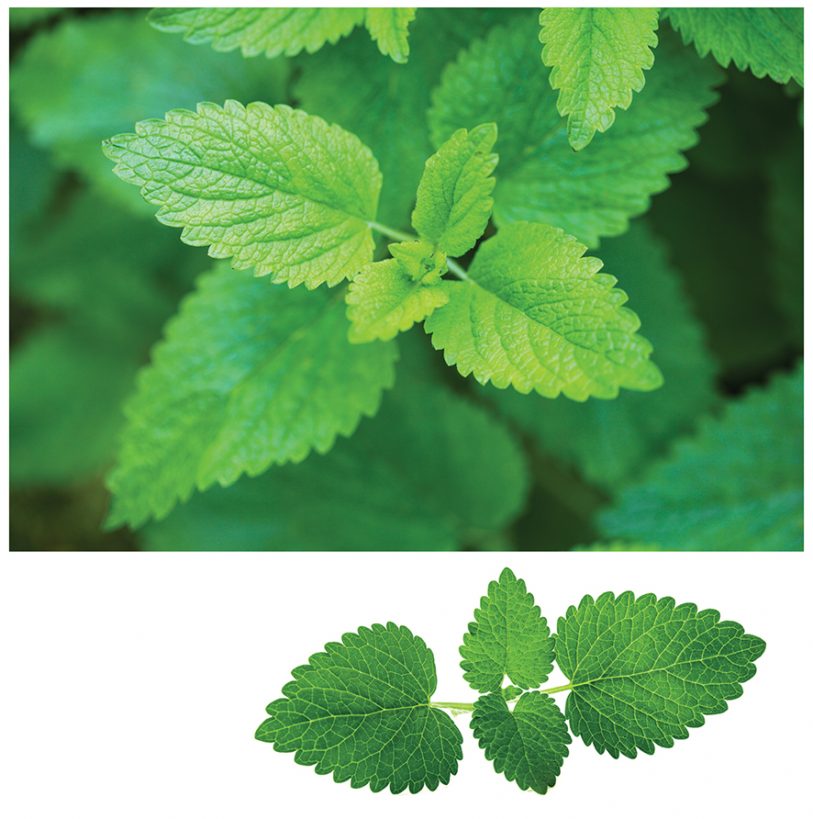 The name Melissa comes from the Greek word for ‘honey bee’ and has been used since an-cient times to keep bees content and attract wander-ing swarms. Research has shown that the plant contains several compounds that are found in the nasonov gland of the honey bee, which helps it communicate in-formation about sources of food and hive location. It is even said that rubbing the herb into the skin discourages stinging.

The benefits of Melissa can be enjoyed by humans as well as bees and the relaxing, mood elevating effects give it a valuable place in medicinal herbals.

Nervine, sedative and antidepressant. Melissa has an effect on the limbic system of the brain which governs mood and temperament. It is calming in conditions of anxiety and tension, promoting restful sleep, yet it is also uplifting to the spirits and improves memory and concentration.

Anti-viral and anti-bacterial, valuable in the treatment of colds, flu and viruses. Herpes simplex virus (cold sore virus) is successfully treated in the form of a topical ointment.

Digestive and carminative, beneficial for stress related digestive problems such as nervous indigestion, peptic ulcers and wind. The herb is gentle enough to be used for children. In one study, 918 children suffering from restlessness and nervous insomnia were given a preparation of Melissa combined with Valerian. Researchers recorded a ‘distinct and convincing reduction in the severity of symptoms’, which were reduced from ‘moderate/severe’ to ‘mild/absent’ in most of the patients.1

Positive results have been gained with Alzheimer’s patients using a Melissa lotion applied to the face and arms. Melissa was associated with highly significant reductions in agitation and social withdrawal, alongside an increase in constructive activities.2

The Heart of Depression

According to the World Health Organisation, depresssion and anxiety are the leading cause of disability worldwide. Although there are defining differences between the classifications of the two conditions they often occur together, with up to 85% of those with major depression also experiencing generalised anxiety disorder.

It was previously assumed that this all occurred as a result of the brain’s response to a stimulus; however, developments in neurocardiology have revealed that the heart has a sophisticated nervous system and communicates with the brain in ways that signifycantly affect how we perceive and react to the world. Coherent heart rhythms play a role in regulating the nervous system3 and therefore also influence depression and anxiety.

Mindfulness exercises that draw back the shoulders and open the heart can be beneficial in depression. Research has shown that the regular practice of controlled breathing, such as that used in the yoga technique of alternate nostril breathing, activates the parasympathetic nervous system, thereby calming the stress response, reducing heart rate and improveing the heart rate variability.4

Making a herbal water is one of the simplest preparations of herbs and is deliciously refreshing on a hot day. Melissa is easy to cultivate and requires little attention to flourish. In fact some caution must be taken when planting out in the garden as, like mint (a member of the same family), it has a tendency to take over.

1 litre of filtered or distilled water

Place the leaves and the water in a jug or jar (preferably glass.) Leave to stand for 2-6 hours in a sunny position, then enjoy!