Some useful medical advice from Dr Chris who has been a GP in Sketty and Killay Medical Centres for 25 years and is Clinical Lead for Swansea Acute GP Unit in Singleton Hospital. 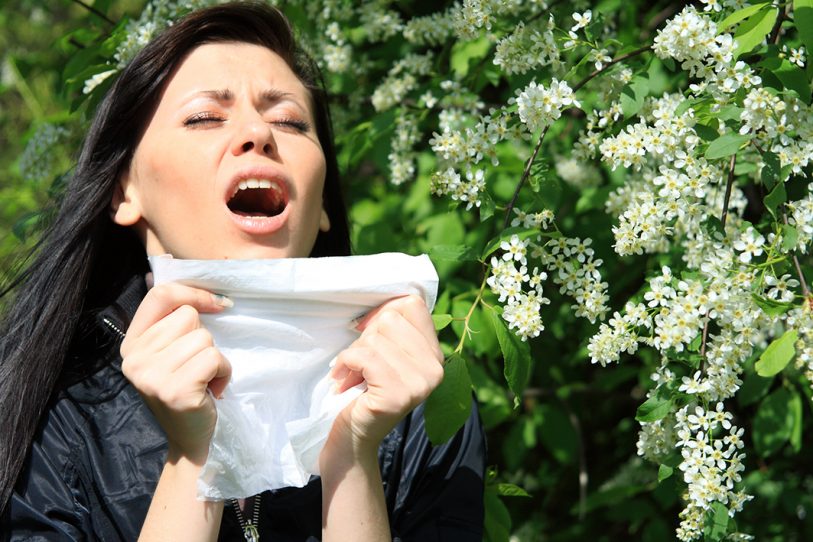 May is my favourite month of the year. For some however, early hay fever symptoms are not so pleasant – streaming itchy eyes and noses, sneezing, snuffles and poor sleep not a good combination. There is lots you can do, however, to help. I hope some if this information helps those who suffer. Visiting your local pharmacist is also a really good idea for advice and help.

Hay Fever has been known about for a long time. The physician John Bostock first identified the condition of hay fever in 1819, believing it to be a disease. The true agent cause of hay fever was finally identified as pollen in 1859 by Charles Blackley, who concluded that pollen contained toxins leading to the reaction.  It was not until 1906 that the mechan-isms of allergy were understood following the work of Clemens von Pirquet. Allergies are common. It is thought that 3 out of 4 people develop some form of allergy in their lives.

The symptoms of hay fever are caused when a person has an allergic reaction to pollen.

Pollen is a fine powder released by plants.  Pollen contains proteins that can cause the nose, eyes, throat and sinuses to become swollen, irritated and inflamed.

You can have an allergy reaction to:

Often asthma symptoms with shortness of breath and wheezing can occur.

It is impossible to avoid pollen totally. However, symptoms tend to be less severe if you reduce your exposure to pollen.  The pollen count is often given with TV, radio, internet, or newspaper weather.

The following may help when the pollen count is high:

Stay indoors as much as possible and keep windows and doors shut.

Shower and wash your hair after being outdoors, especially after going to the countryside.

Wear wrap-around sunglasses when you are out.

Keep car windows closed and consider buying a pollen filter for the air vents in your car. These should be changed at everyservice.

Visit your pharmacist as most treatments are available over the counter and do not require you to see your GP.

Antihistamines treat hay fever by blocking the action of the chemical histamine, which the body releases when it thinks it is under attack from an allergen. This prevents the symptoms of the allergic reaction from occurring.

Antihistamines are usually effective at treating itching, sneezing and watery eyes, but they may not help with clearing a blocked nose.

You can use antihistamines:

as a preventative treatment – for example, if you know there is going to be a high pollen count, you can take them before  leaving the house in the morning .

Try to avoid older antihistamines as they can cause drowsiness unless you are taking them at night.

Eye drops treat the hay fever symptoms that affect your eyes, such as redness, itchiness and watering (allergic conjunctivitis).

Eye drops containing the active ingredient sodium cromoglicate are the most widely used. Check the patient information leaflet for the correct way to use them. Some may cause side effects, such as a stinging or burning feeling in your eyes.

It works by reducing inflammation in the nose. It takes several days for a steroid spray to build up its full effect. Therefore, there is no immediate relief of symptoms when you first start it. In some people it can take up to three weeks or longer to be fully effective. So do persevere.

A steroid nasal spray tends to be the most effective treatment when symptoms are more severe. It can also be used in addition to anti-histamines if symptoms are not fully controlled by either alone.

There are other types of nasal sp-rays that may work in some people including antihistamine sprays. Other types of nasal sprays that can be used are decongestant sprays. They are only used very short term be-cause if you carry on for more that 5-7 days they can cause a rebound worsening of nasal congestion.

Leukotriene receptor antagonist – These medicines block the effect of chemicals that trigger hay fever symptoms. They work well when taken with antihistamine tablets, especially in people who also have asthma.

Nasal saline washouts – This is done by some people. The aim is to wash pollen out of the nostrils.

Immunotherapy – If you have severe persistent hay fever symptoms that are not relieved by the above treat-ments, your GP may refer you for immunotherapy treatment. This involves gradually introducing you to small amounts of the allergen (the substance you are allergic to), such as pollen, and monitoring your allergic reaction. However, this treatment is only carried out in specialist medical centres in case a serious allergic reaction (anaphylaxis) occurs.

I will be back with you soon in TheBAY!