All photos by Liz 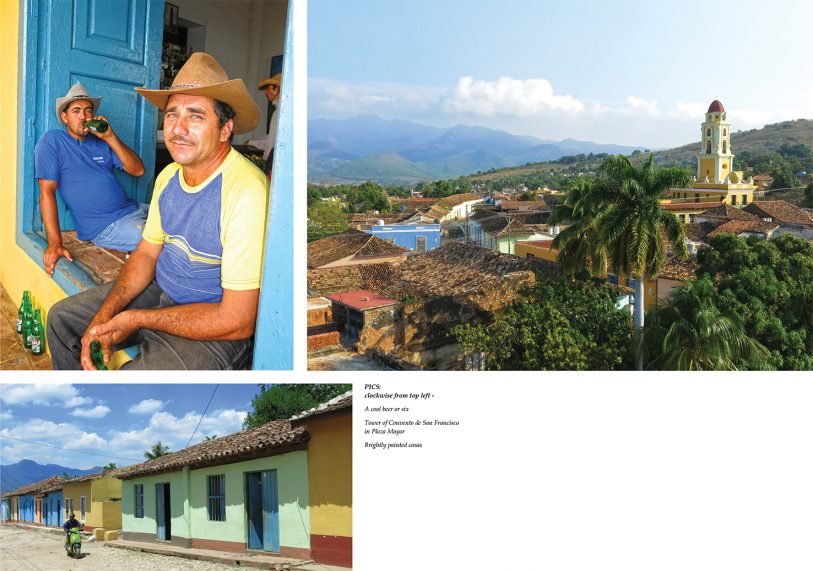 In 1988 UNESCO declared Trinidad a World Heritage Site as it is Cuba’s oldest and most enchanting ‘outdoor museum’. The town sits in a magnificent location nestled between the high mountains of the Escambray Range and the lovely white beaches and warm waters of the Caribbean Sea.

Trinidad is a picturesque Spanish colonial town which dates back to 1850, built on huge fortunes amassed by the sugar barons, from their plantations in the adjacent Valle de los Ingenios also known today as the Valley of the Sugar Mills. In 1827 there were 56 mills in the region, one of which harvested the world’s biggest cane haul, worked by the hands of thousands of slaves shipped from the west coast of Africa. 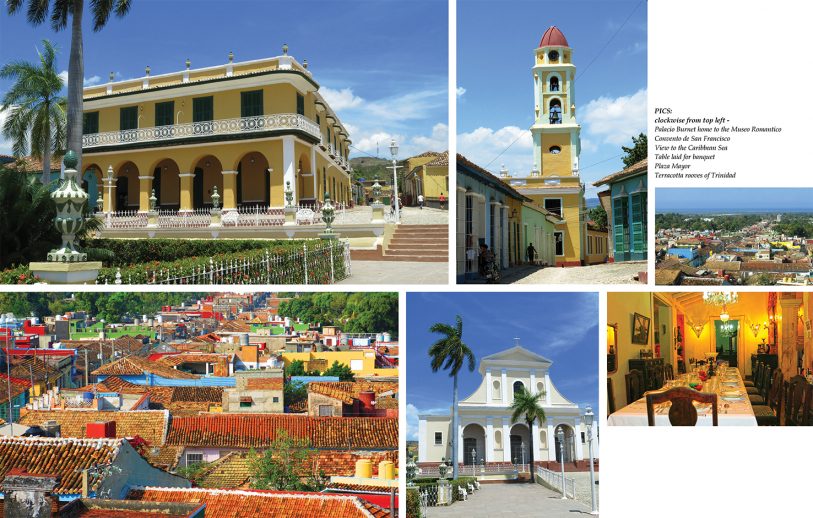 The riches of the town are still very much in evidence today, as I discovered on a walk around the old square Plaza Mayor where some of the ancient mansions have been restored and opened as museums. One of the rooms was set out to replicate a grand dining room ready for a banquet, with white linen table cloths draped over long dining tables laid with silver cutlery and sparkling wine glasses. French crystal chandeliers hung against a backdrop of delicate Italian frescoes that decorated the walls.

A striking yellow church bell-tower rises above the town; I climbed a well-trodden blue wooden staircase which spiralled upwards to a viewing platform. Far below, a patchwork of terracotta tiled roofs appeared to be balanced on top of the adobe walls of the brightly painted casas. 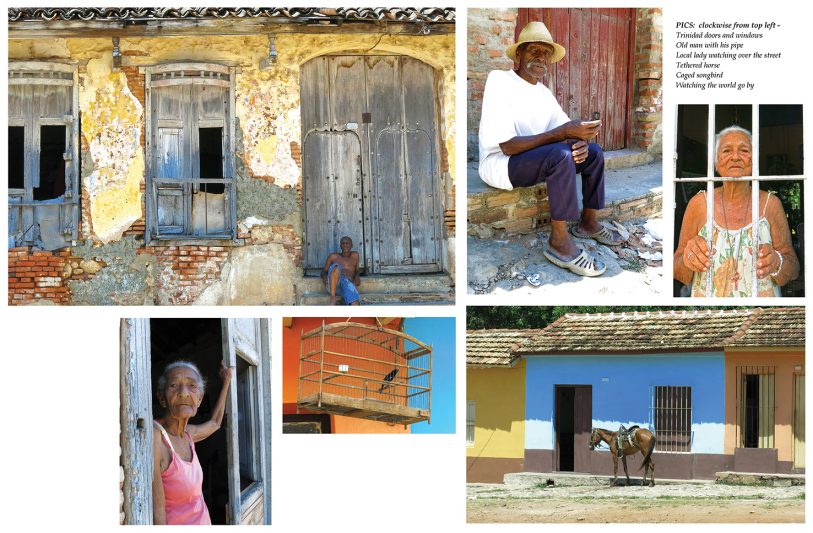 In the distance I could see the glistening blue waters of the Caribbean washing across the white sands of Ancon Beach. The silence was broken by the sound of hooves on the cobbled streets as a lone rider, his face shaded beneath the brim of his cowboy hat, trotted by.

Along the back streets, old ladies sat on their doorsteps to gossip, while others watched the day unfold through half shuttered doorways. Wicker cages containing songbirds hung along the walls. An old man, hand clenched around a homemade pipe, rested beside the road, spirals of purple smoke obscuring the lines on his weathered face as he gazed towards me, his eyes shaded from the sun, beneath a straw hat.  Not far away a lone horse was tethered, waiting for his owner to return. 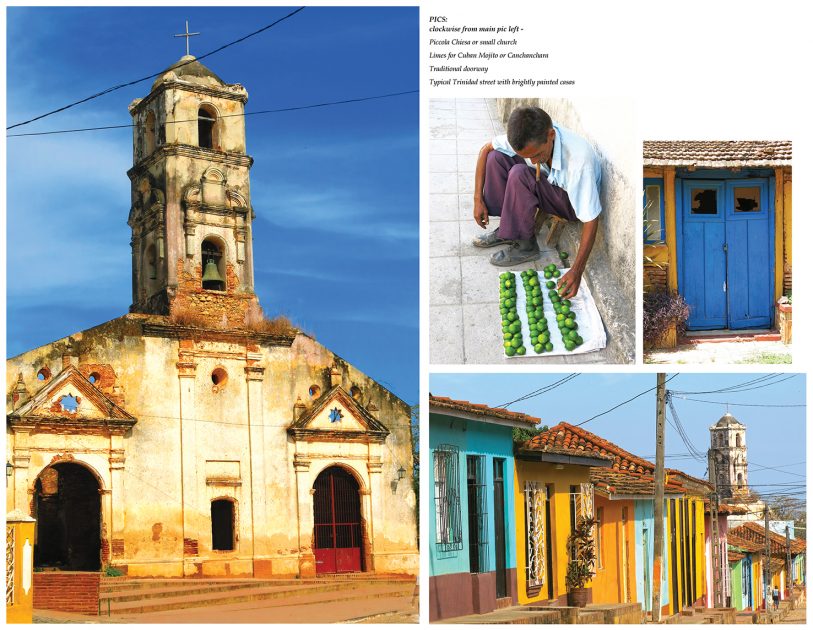 Trinidad is a lively town with a population of 60,000. When evening comes, the locals gather and sit on the steps outside the Casa de la Musica, to be entertained by bands of Trovadors and to dance to the salsa beat.

About 4 hours’ drive from Havana, Trinidad is certainly far less chaotic and has over 3 miles of white sandy palm fringed beaches that are quieter than the better known resorts of Varadero and Guardalavaca. As tourism increases in Cuba and American citizens take advantage of the relaxation of travel restrictions between the two countries, Trinidad offers a tranquil oasis in what is otherwise a spirited vibrant country. 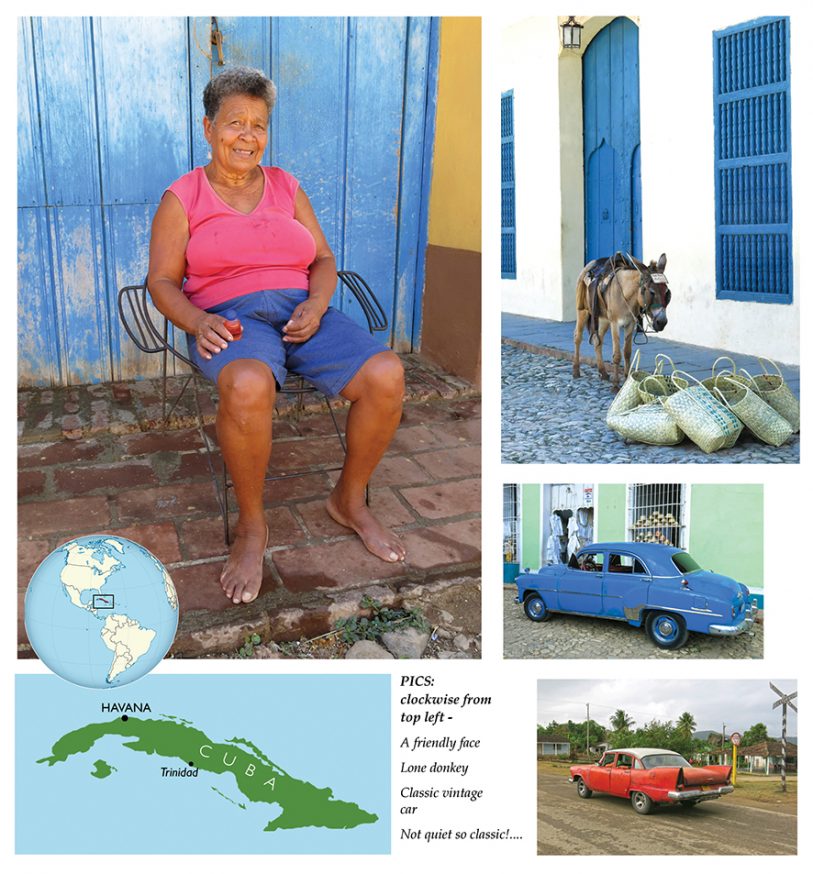 www.cubatravelplan.co.uk part of Rickshaw Travel  which can arrange independent travel to and within Cuba.