EARLIER THIS YEAR WE ANNOUNCED THE ARRIVAL OF A NEW MICROBREWERY IN SWANSEA… BOSS BREWING. TheBAY WAS DELIGHTED TO HEAR LAST MONTH THAT OWNERS SARAH AND ROY HAD WON A GOLD AWARD FOR THEIR BOSS BLACK STOUT 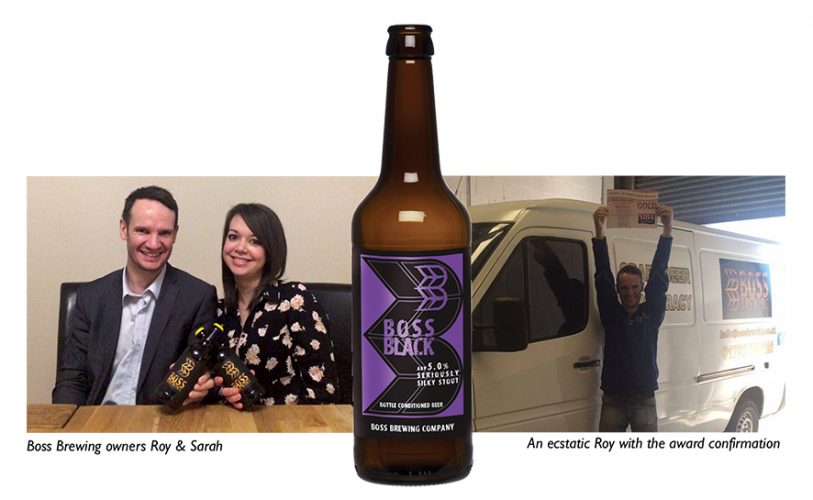 Swansea’s newest microbrewery has impressively already gained award-winning status just over a month after it launched in April of this year. Boss Brewing’s stout, known as Boss Black, was announced the Gold Award Winner and the brewery was presented with the SIBA Wales and West Keg Trophy 2015 in the first week of May. The award-winning stout has a rich, silky and complex character and packs a chocolatey, nutty, smoky hit.

Prior to winning the award, the beer had already been met with a hugely enthusiastic response by pubs around the Swansea area. It’s also been lapped up, along with the brewery’s golden ale, blonde ale and American IPA, by eager landlords in pubs as far afield as Newcastle and Kent

The owners of Boss Brewing, Sarah John and Roy Allkin, were thrilled to have been presented with this award.

Sarah commented ‘We’ve worked so hard on all of our recipes and are passionate about all of our beers, so to be recognised for creating a great stout is fantastic.  We’re even more honoured that we are able to say that we received this recognition whilst still a start-up business and less than two months after the public first tasted our beers. We’d like to think that this is another example of a small, local business achieving good things.’

Roy added ‘We’ve loved getting really generous feedback on our stout from members of the public through our social media sites such as our Twitter and Facebook accounts. We were really proud of what we had created beforehand, but to have won a gold award for it is even more incredible.’