LAST MONTH, LIAM TOOK DELIVERY OF A VW CAMPERVAN AND WHERE BETTER TO TEST-DRIVE IT THAN AT THREE CLIFFS CAMPSITE ON GOWER…. 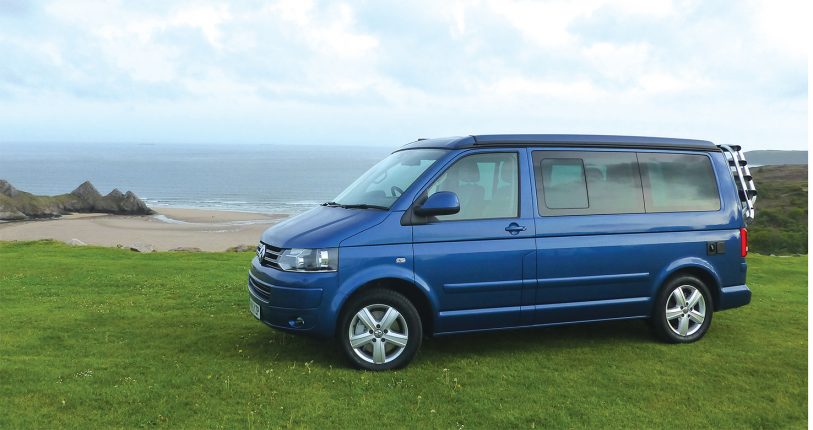 A thoroughly modern and most solidly built dwelling, constructed in the traditional style so typical of that found in Wolfsburg, Lower Saxony, Germany. Accommodation is split over two floors and comprises of the following.

A compact and bijou open plan living-room/kitchen/dining area with fully-fitted galley-style kitchen complete with integral fridge, double-ring gas-fired hob and fully fitted sound/telephone system. A range of overhead and under-sink purpose built storage options are fitted, and the room also benefits from the addition of sliding doors (to outside), plus feature windows with integral blinds. This most versatile of spaces can easily be converted in to a full-size double bedroom.

Heating to both floors is either by a mains electricity powered fan heater with battery back-up, or a 2.litre diesel engine powered air-conditioning system.

Outside there is a small garden/patio area covered by a retractable awning that offers the perfect place for alfresco dining, or an evening’s entertaining. Further storage is also provided for the garden furniture (a folding table and two folding chairs) which is included in the purchase price.

This most charming of residences also offers extensive views of…. well, wherever you decide to park it really. We chose the stunning in every respect Three Cliffs Bay on the Gower Peninsula, for reasons that will eventually become clear – more of that later.

Apologies if you think you’ve just stumbled upon the property section by mistake; honestly these are the motoring pages. It’s just that when it comes to the Volkswagen California you tend to talk more about the accommodation it offers rather than the way it drives. Nevertheless, we’d better deal with that too.

Based on the Volkswagen Transporter/Caravelle van, the California actually feels far better to drive than you might think. Ok, so it’s not the most engaging of vehicles in which to attack your favourite B-road, but when fitted with VW’s 1,968cc Twin-turbo 177.5 bhp diesel engine allied to a 7-speed and multi-talented DSG automatic gearbox (as tested here) it proves to be smooth, quiet, refined and surprisingly – for a van – swift. It also promises 37.2 mpg. Perhaps it is stretching things a bit to call the California’s on-road dynamics car-like, but when due consideration is given to both its weight and momentum, when roll-ing, all-in-all they’re not far off. It’s surprising what you can out accelerate off a roundabout too, not that I could ever condone such behave-iour of course, and never once will you hear a rattle or a squeak from all of that extra on-board kit.

It could be said though that the California offers more fun when it’s parked-up and levelled on its chocks, the front seats have been swivelled round to face those in the back – not quite as easy as it sounds due to the driver’s side fouling the handbrake lever; the California is one of the few vehicles I’ve driven that would actually benefit from an electric parking brake – and the electrics have been coupled up.

With the heater and the kettle on, or perhaps a chilled Penderyn Gin and Tonic from the fridge (we called in at the distillery on the journey down and, pitch paid for, obviously had no intentions of driving back the same night) the California provides the near-perfect place from which to sit back and watch the sun go down. And, even if the weather takes a turn for the worse, after you’ve slipped under the duvet, you can rest assured that even in what feels like a full force Welsh Coastal Gale, the California’s roof, even when elevated, remains as tight as a drum.

There is one point of contention I feel I should mention however and there’s no way to break the news to you gently. The California has no loo! And, there’s no shower either.

Thankfully though Three Cliffs Bay offers beautifully appointed, and under-floor heated, wet rooms that put many a hotel en-suite to shame; like the rest of the facilities they offer they’re also immaculately presented and kept spotlessly clean. And all for just £26 per couple per night inclusive of the all-important electric hook-up. The views offered by what was the UK’s first designated Area of Outstanding Natural Beauty are worth that alone.

The California however, is a little more pricey. To bag yourself an SE 2.0-litre BiTDI BlueMotion you’ll need the best part of £50,000. It’s not cheap but judging by the amount of admiring glances, compliments, and even thumbs-up from other VW drivers it received during our time with it, I’d say the Volkswagen California is one of the most des-res home-from-homes you can buy. 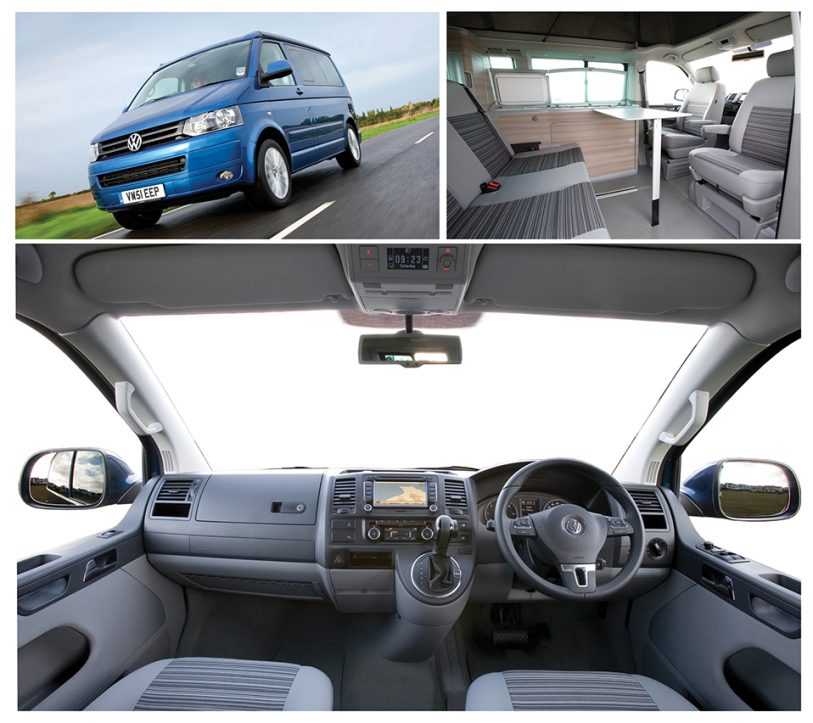 And thanks also to everyone at Three Cliffs Bay