To most people the Algarve in southern Portugal is a haven for sun-seekers, fun-seekers and a general tourist destination. This is partly true, as around the Albufeira area there are many holiday villas and hotels catering for mass tourism. However, if you travel from Faro airport in an easterly direction you will discover a completely different Algarve

This was a return visit to Olhão in Portugal to meet up with our resident chef Tatiana Bento and her partner Dave, so it wasn’t to be a sight seeing holiday but more a culinary catch-up. High on my list of priorities was to go to Tapas e Lendas, a small tapas bar just a few steps from The Marmalade House where we were staying. We were greeted like old friends by the chef/patron Renato – and immediately the food started coming. Small plates of wafer thin Iberian black pig, olives and bread and best of all following a late evening flight from Bristol, a carafe of perfectly chilled, young green wine – vinho verde. I have always been a red wine drinker, having considered white wine to be too acidic – I have obviously not been trying the right variety. Vinho verde is not acidic in the least, it is smooth and fresh and very quaffable.

Veal doesn’t often make an appearance on British menus, so the grilled veal chop had to be sampled, along with the oxtail braised in tomato with butter beans. The beauty of tapas is that as the portions are small you can try lots of different dishes without having to let your belt out a notch. 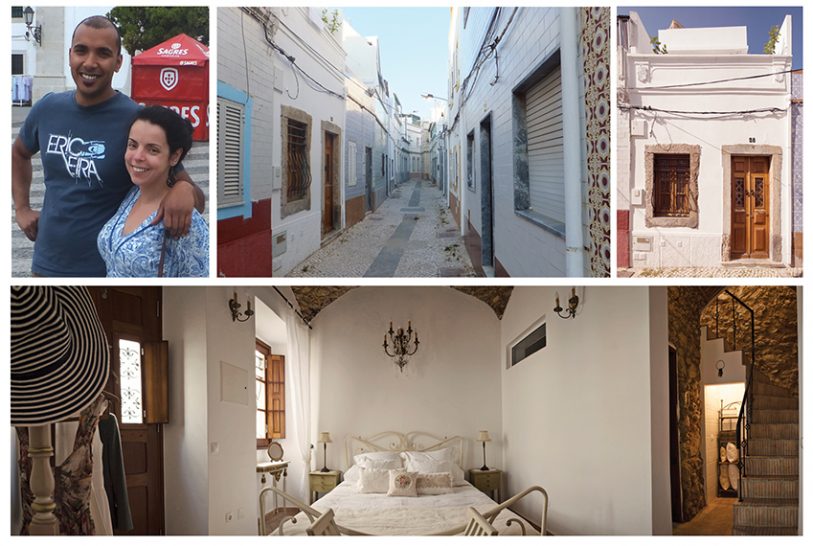 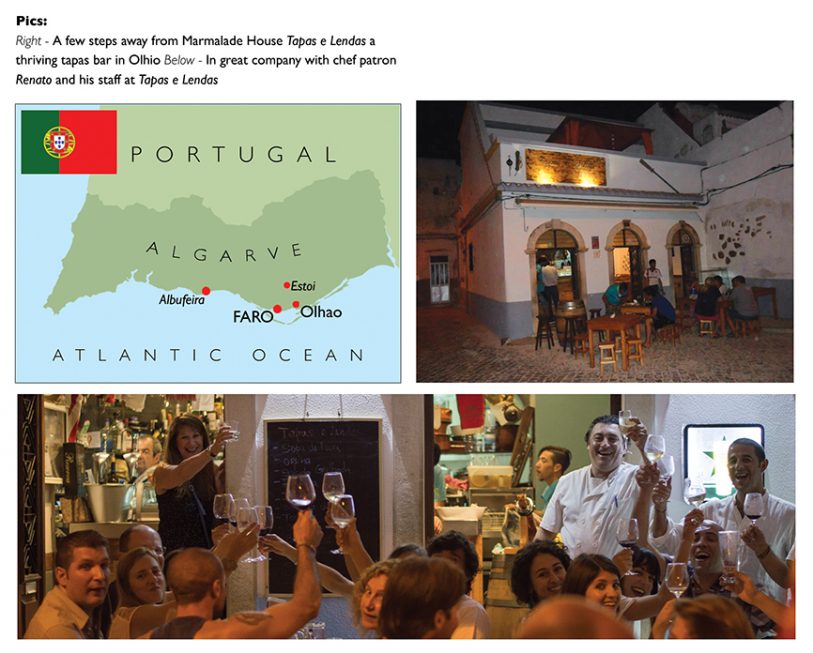 Our love of fish makes Olhão the perfect place to base ourselves. This thriving fishing village has traded in seafood since the Middle-Ages, and has at its centre the most wonderful fish markets with over 80 stalls selling every fish and mollusc that swims in the Atlantic Ocean that surrounds its shores. As well as those that I recognised there were plenty that I didn’t, and it wasn’t just fresh fish – the salt cod or bacalhau is as popular today as it was 500 years ago when it was a necessary process in order to preserve fish without refrigeration. 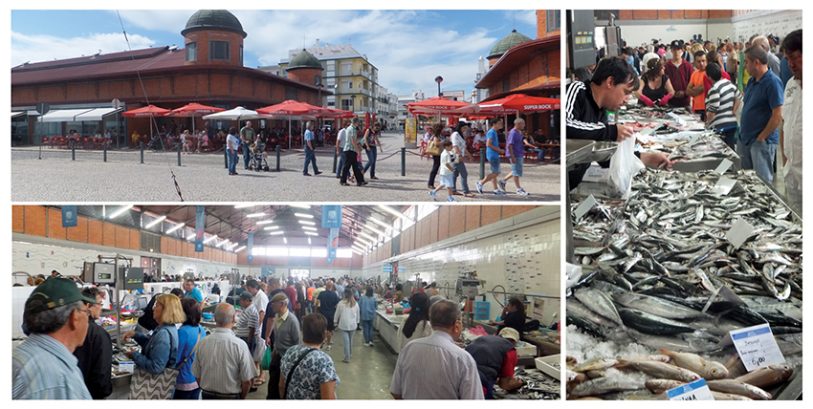 My husband and BAY designer/illustrator Simon got up early one morning to capture some of the local activity in and around Olhão. It’s not often he gets the opportunity to sit and sketch while working on the magazine and the turreted fish market and fishing boats made good subjects. 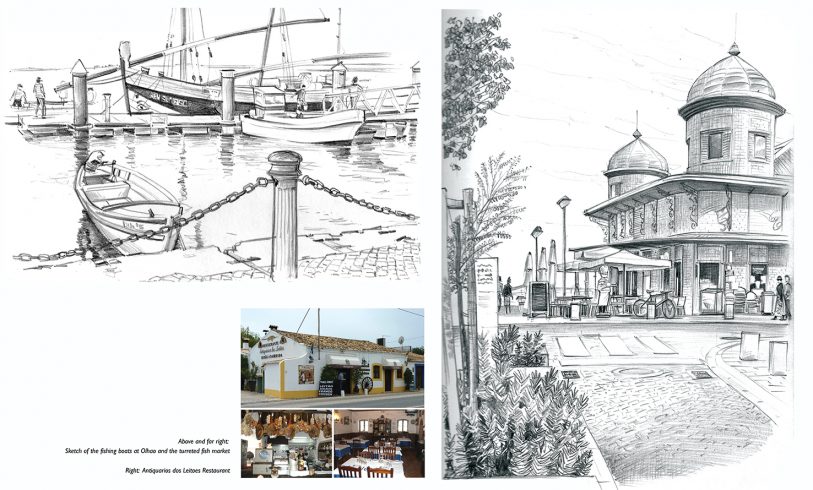 In the Algarve or as it was known in Arabic, Al Gharb meaning The West, you can still see the Moorish influence in the North African inspired architecture. The terraces and mouldings and the Islamic motifs in the tiles that cover the exterior of houses, all bear witness to its Moorish conquest in 711. This influence also extends to Portuguese cuisine with its use of almonds, figs and egg based desserts. You will find Tatiana’s recipe for a traditional Portuguese custard tart further on in this section of food & drink. These tarts are topped with ground cinnamon, a spice native of the countries in the Far East. Portugal has long been noted for its maritime explorers and colonists beginning with Prince Henry the Navigator who explored the coast of Africa in the early 1400s bringing back exotics such as coffee, peppers and peanuts.

Portugal is also famous for its black or Iberian pig prized for the fine flavour which is attributed to a diet of acorns. Every tapas bar and restaurant has a jamon iberico hanging from the ceiling, or impaled on a stand, ready for slicing – always by hand. Another speciality I was keen to try out was the wood-fire roasted pork which is only available from speciality restaurants. The oddly name Antiquarios dos Leitoes  roughly translated as the antique pig is one such restaurant that appears to only serve chicken or pork. We were here to sample the pig which came in two portion sizes – full or half. After being advised that a full portion would be enough for two we were very glad that our gluttony hadn’t taken over, as the platter arrived piled with enough roast pork and crackling to serve a family of 4. Home made crunchy crisps, salad, and the cooking juices served in a dinky little jug were all that were needed to complete this feast.

Restaurants that specialise in just one thing seem the norm in Portugal. If you want chicken piri-piri then you go to the small town of Guia, here this traditional dish of spicy chicken is so popular it has its own festival in July every year – the Festa do Frango no Churrasco.

Of course many restaurants specialise in fish with sardines being by far the favourite. For some reason, Portuguese sardines seem much plumper, juicier and less bony than other varieties – perhaps it’s the wood-fired barbeques that they are cooked on.

This holiday coincided with my birthday and Tatiana and Dave had the ultimate gift for me. They had planned an evening wine tasting at About Wine in Faro. The setting was perfect – the building has vaulted ceilings and feels like you’re in a wine cellar. We were to try five wines – two white and three red plus a couple of ports. Owners Luis Figueira and Alexandra Alegria had prepared a selection of local foods to try along with the wines, explaining why each matched or paired best. I learnt a huge amount about the different wines of the region and the single variety grapes. I now know my Alvarinho from my Encruzado.

Although this trip was meant to avoid the usual tourist traps we made an exception when we took a boat out to the Ilha Deserta – literally the desert island. Estaminé restaurant is environmentally friendly, solar powered and the southern-most place to eat in Portugal.

Set among the sand dunes and with panoramic views from the bi-fold windows this is a special place to eat. The food is classic Algarvian fresh fish and good wine – not as inexpensive as the mainland restaurants and bars – but with the added transportation expenses taken into account it all becomes worthwhile. A whole roasted seabass was enough to feed four hungry Robinson Crusoes before they took a very un-Portuguese siesta. 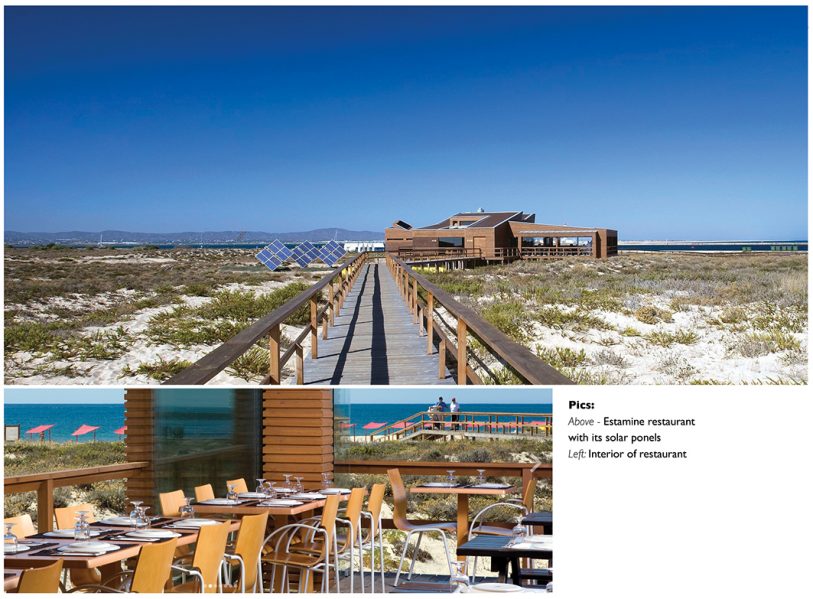 Eating out on a budget is easy in Portugal with the average cost of a meal including wine or beer coming in under 10 Euros. One such meal was at CasCas on the harbour front in Olhao. Just recently opened, it specialises in shellfish and crustaceans. For a country that eats so many varieties of seafood there are remarkably few places to eat them unless you’re lucky enough to be invited into a local home. These are things that are usually made for the family – watch how the locals come home from the market with large string bags of small snails or clams – you rarely see them on a restaurant menu. As well as fresh fish the guys at CasCas are keen to promote the marvellous tinned and canned produce that Portugal is rightly proud of. Slivers of tinned mackerel, served on toasted sourdough bread with just a sprinkling of sea salt and olive oil turned out to be one of the stand out dishes of the evening – so much so that I have taken to serving it as a starter or light lunch chez Williams. 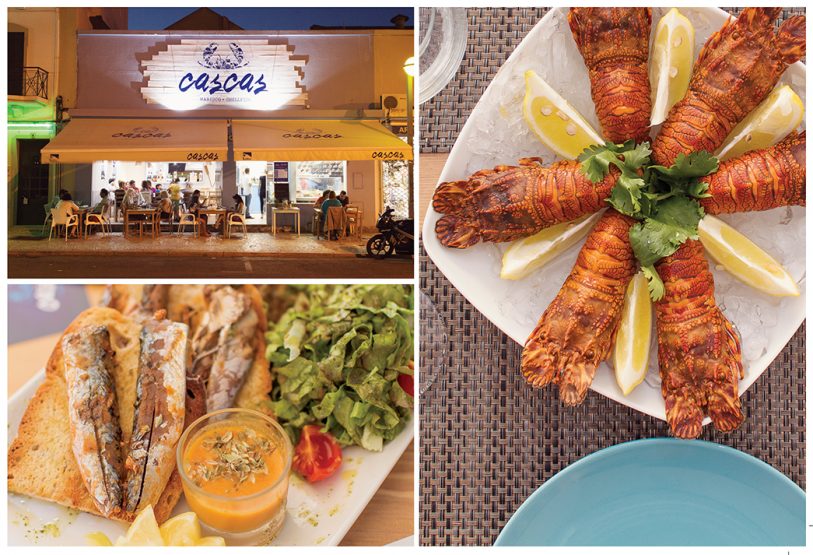 Beachside eating is one of my favourite things to do. In Swansea it’s at Langland’s, Surfside Cafes, Coalhouse and Café Remos, and when I’m abroad I love to sit and watch the sun go down from the vantage point of a beach-bar. The Praia de Faro is a stretch of white sand approached through the Ria Formosa National Park via a causeway road. It is one of the few beaches in the area that you can drive to without the need for a boat or train trip. Overlooking the beach is a classy little restobar – their title –  called Wax – which is presumably a surfing reference. Here they serve a perfectly chilled vinho verde along with a juicy steak espetada that was so good we went back for seconds just before getting the plane home.

Another favourite beach was further east and required a short journey on a narrow-gauge railway. Praia Do Barril is one of the last island beaches on this stretch of coastline and has an unusual art installation comprising of hundreds of anchors – relics of the thriving tuna fishing fleet that was once based here. Now the old fisherman’s cottages and net stores have been converted into shops, restaurants and bars. 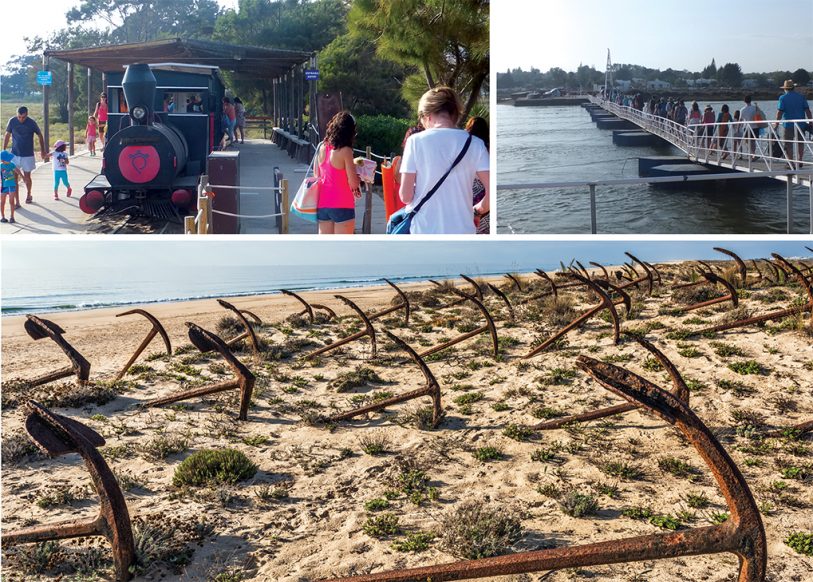 I am not one to frequent children’s theme parks, as up until recently I haven’t had the necessary child to take along. However I was intrigued to hear about a zoo marine park near Albufeira that was working on the conservation of marine animals and in particular dolphins and seals. As our last day was a little overcast we joined the throngs of children with trepidation. We needn’t have worried as there was plenty of adult entertainment such as water slides and white water rides! Most importantly there were demonstrations of the skills and intelligence of the most alluring of marine mammals. The dolphin’s affinity with their keepers was deeply moving, and watching the seals turn from ungainly land lubbers to elegant and graceful once in the water was quite beautiful. Maybe I will try other theme parks in the future. 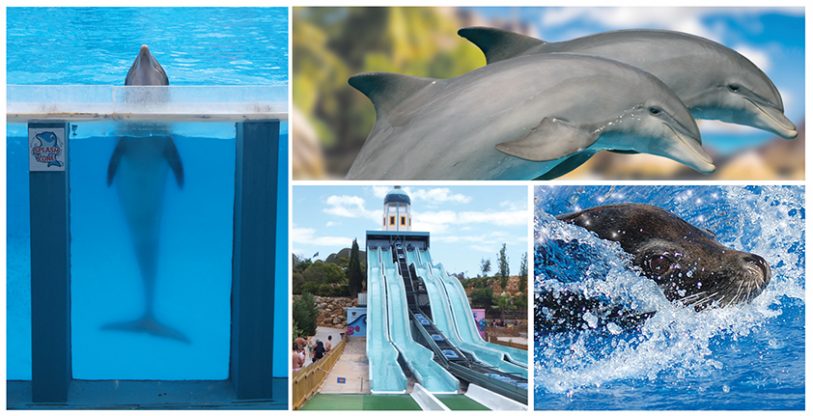 Our Portuguese sojourn culminated in a couple of days a little further inland in the village of Estoi. The Palacio de Estoi is part of a chain of hotels that are in converted historic buildings. Here the juxtaposition of the eighteenth century architecture alongside cutting edge 20th century design appears seamless. I had been drawn to the palace not only by its affordability but also by the promise of a gastronomic restaurant. The elegant dining room with its elaborate painted ceilings and gilded chandeliers would not normally have been a place that I would have felt comfortable in – but in true Portuguese relaxed style it was perfectly acceptable to dress casually and concentrate on the food. The emphasis here was again on local dishes and Tatiana was interested to see just how authentic they would be. I don’t think she was fully prepared for the whole octopus that came with her stew, but this girl can handle a live cephalopod singlehanded. After a request for a doggy bag the beast was served up for Dave’s lunch the next day. Not all the dishes were scary; carne de porco àlentejana is a traditional dish of pork and tiny clams that Tatiana gave as her recipe in September 2013 and is still available on our website. 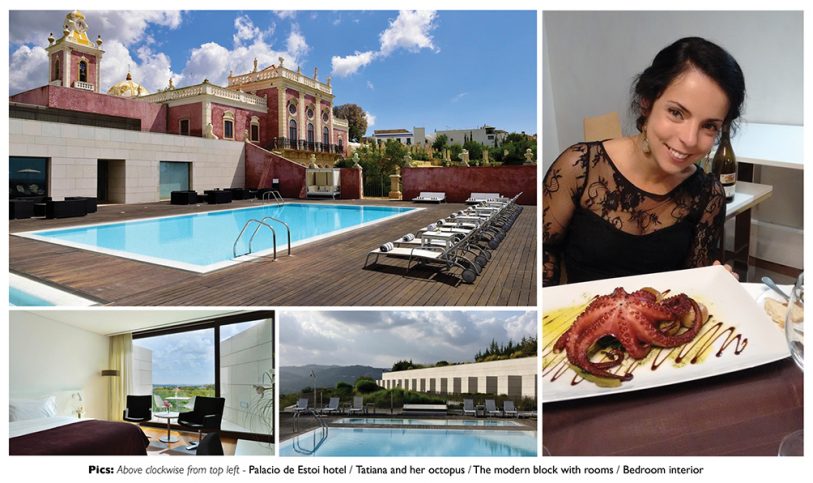 We had a fab holiday and because of Tatiana and Dave, we discovered many places not on the usual tourist trail.

Here are a few of the websites that you might want to look at if you’d like to uncover a different Algarve.