Of Damsels and Dragons

On sunny summer days near lakes and streams, dragonflies delight with their spectacular aerobatics while damselflies enchant with their fluttering, dancing flight on glittering wings. No casual observer would suspect that they are actually watching deadly predators with some of the strangest mating habits in the insect world.

Dragonflies and damselflies have been around for 300 million years, which means they were already well established when dinosaurs first appeared, and beautifully preserved fossils show that in all this time they have remained largely unchanged. In order to have prevailed where countless other species have failed, they must have hit upon some exceptionally successful survival strategies.

There is no doubt that dragonflies are among the most efficient and deadly hunters in the world. Recent studies have shown that adult dragonflies may catch up to 95% of prey they attack, which is twice the success rate of a Great White Shark and three times that of a pride of lions. Contributing to this efficiency is the fact that they are among the most agile flyers in existence. Their four wings are capable of operating independently of each other, giving them the ability to fly not only forward and back but also up, down, left and right as well as hover on the spot. These unparalleled aerial skills are subject to much scientific research and findings are used, among other things, to design super-agile miniature aircraft.

Dragonflies also have some of the largest and most highly developed eyes among insects, giving them 360 degree vision. When hunting, unlike most other insects, they are able to focus on an individual in a swarm and also to predict their prey’s movements to intercept it. Once they have caught up with their hapless victim, they trap it in a basket formed by their spiny legs before biting off its wings and then devouring it at leisure, sometimes while still in flight. It is not uncommon for dragonflies to catch large, fast prey such as bees, wasps and even other dragonflies (photo 1). Damselflies are not only smaller but also less agile than dragonflies, so they tend to go for slower, less formidable prey such as mosquitoes and mayflies.

Although it is the conspicuous adult stage that is commonly associated with the terms ‘dragonfly’ and ‘damselfly’, they only live for a matter of weeks in this form. The majority of their lives, usually between 1 and 5 years depending on species, temperature and availability of food, is spent in fresh water in an immature form known as a nymph, whose sole purpose is to feed and grow.  Dragonfly and damselfly nymphs look similar, but damselfly nymphs have three feathery gills at the tip of their abdomen while dragonfly nymphs have none (photos 2 and 3). 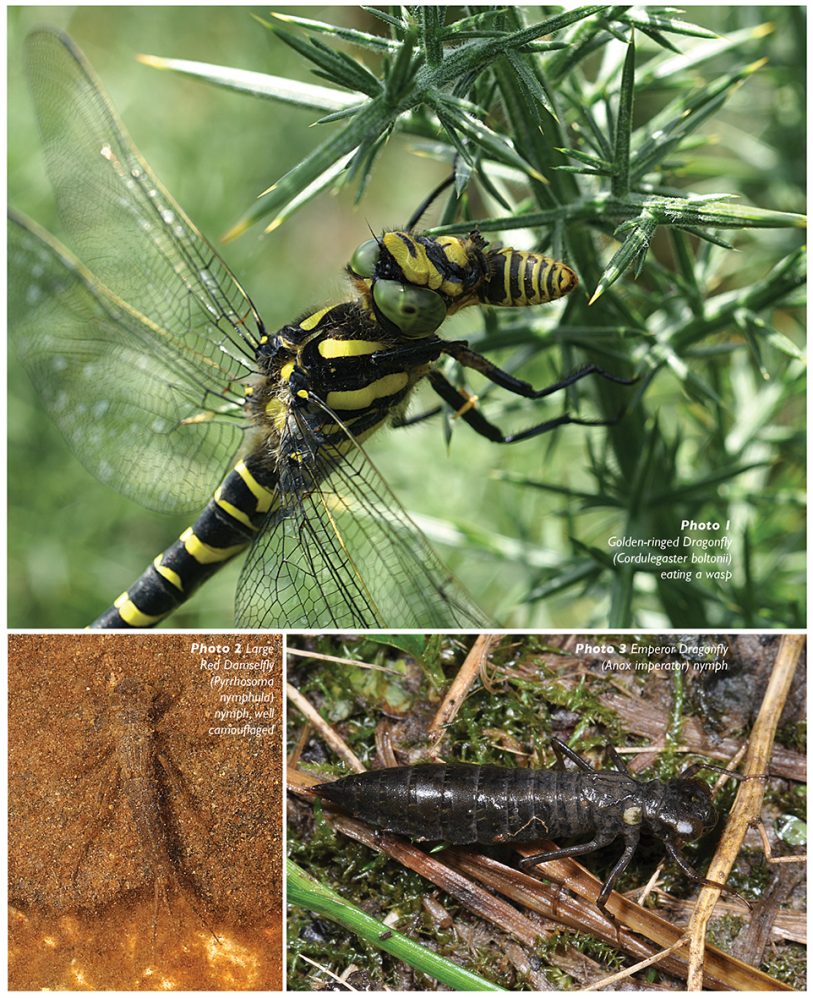 The nymphs, like the adults, are formidable predators, with larger individuals even strong enough to catch tadpoles and young fish. In order to capture their prey, the nymphs have a specially adapted extensible lower lip with pincers at the tip, which is called a labial mask. This is double-hinged and usually carried folded up under their heads, but can be extended in a fraction of a second to grab an unsuspecting prey animal which would have considered itself at a safe distance only moments before.

But the law of the pond is ‘eat and be eaten’, and many animals such as ducks, fish and other predatory aquatic insects are rather fond of dragonfly and damselfly nymphs. While the nymphs are well camouflaged by their dull colours and sometimes fine hairs which, by trapping small particles, help to disguise them even further, dragonfly nymphs have one more trick up their sleeve. They breathe by means of rectal gills, drawing water into their rectum and over special tissues designed to allow the absorption of oxygen and release of carbon dioxide. When the nymphs are startled, they are able to eject the water in their rectum through their anus at speed, using jet propulsion to rapidly put distance between themselves and their attacker. They can cover up to 10 cm in one second using this unique method of locomotion, definitely fast enough to leave a duck confused at finding its bill closing around nothing but water where it was expecting a nice succulent morsel to be.

When they are ready to transform into adults, dragonfly and damselfly nymphs climb out of the water onto stout plant stems or other vertical structures where they moult into their adult forms. Empty nymphal skins can often be found still clinging to vegetation at the water’s edge in late summer. The newly emerged adults take a few days to harden fully and take on their final colouration (photo 4). After this, the adults’ main focus is to breed. In many species males and females are easily distinguishable by their different colours (see photos 5, 7, 8).

Males of many species are fiercely territorial and will battle over the best spots, sometimes with fatal consequences. Any female entering a male’s territory is usually quite rudely accosted, with the male immediately trying to grab hold of her and grasp her neck with a pair of specially designed claspers at the tip of his abdomen. Not infrequent-ly, the male accidentally pierces the female’s eyes or even head capsule with his claspers in his attempts to get a proper hold. Once a male has successfully secured a female, he remains attached to her until mating is complete, and often throughout egg laying as well. Surprisingly, a pair is quite capable of flying while linked in this tandem position. However, having assumed this position, sperm transfer in the usual fashion (from tip of abdomen to tip of abdomen) is clearly impossible. In order to still be able to mate successfully, the male will at this stage already have transferred his sperm into a set of secondary sexual organs at the front of his abdomen. When the female is ready to mate, she curves the tip of her abdomen up towards the underside of the male’s to receive his sperm, forming the so called ‘mating wheel’ (photos 5 and 6). 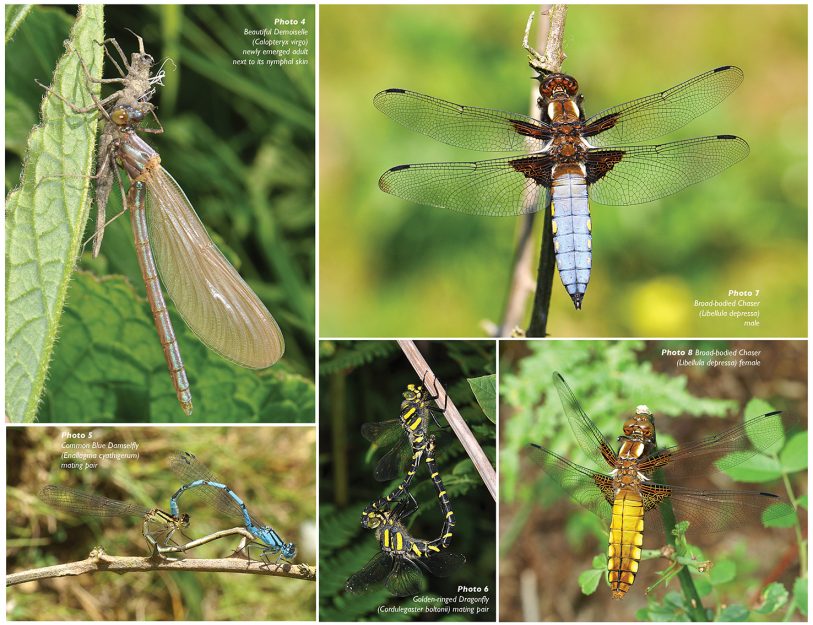 The female’s eggs are not fertilized straight away. Instead, females store the sperm they receive in a special pouch and only use it to fertilize their eggs when they are actually being laid. Also, they mate with a number of different males in their lifetime. These two facts present a problem for the males because, consequently, simply mating with a female does not guarantee that a particular male’s sperm is actually going to be fertilizing any of her eggs. To counteract this problem, the males of many species possess a specially designed sex organ that enables them to remove other males’ sperm from the female’s storage pouch before replacing it with their own. In addition, many males then either remain physically attached, or stand guard over, the female until she has laid her eggs in order to ensure their paternity (photo 9).

Damselflies lay their eggs into little slits in the stems of aquatic plants which they cut by means of a sharp-edged structure at the end of their abdomen called an ovipositor.

Sometimes they even fully enter the water to do this. They are able to make their way back through the water surface without clinging to plants and even take flight from a floating position. However, in many species the male remains attached to the female’s neck which may make it easier for her to come back out of the water.

Dragonflies, depending on species, lay their eggs either in plants, debris or mud, or free floating under the water surface.

There are two locations in the Swansea area which are particularly renowned for their numbers and varieties of dragonflies and damselflies, namely Crymlyn Bog and Oxwich Burrows, where, in fine weather, one is virtually guaranteed to encounter these beautiful ancient insects displaying their full range of fascinating behaviours. However, many species are happy to make themselves at home in much smaller abodes so that, with a bit of luck, it is quite possible to watch them hunting, mating and egg laying in and around our very own garden ponds. 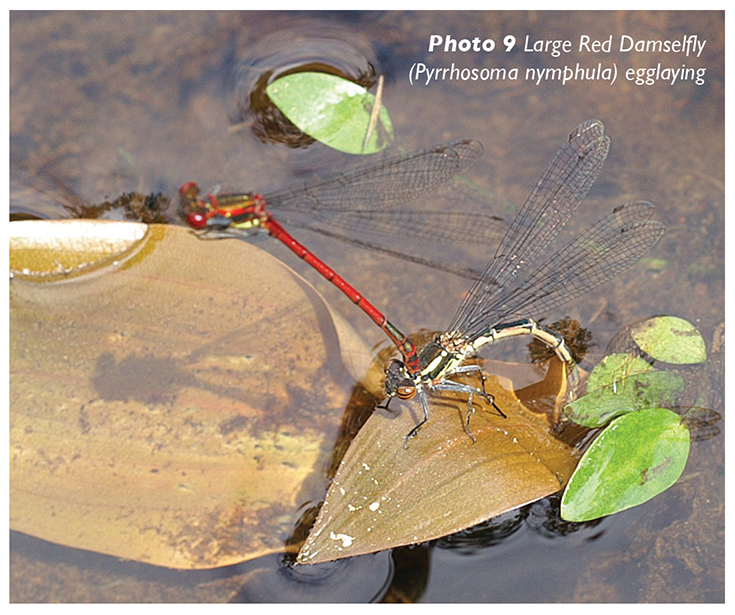 Paul D. Brocks’ latest bestseller A comprehensive guide to Insects of Britain & Ireland (Pisces 2014) covers more than 2100 species and has been reprinted in 2015: www.naturebureau.co.uk/bookshop/a-comprehensive-guide-to-insects-of-britain-and-ireland-detail, or call 01635 550380