Last month we were lucky enough to have some very special guests staying at The Marmalade House here in Portugal. A lovely couple from Swansea, who used to come to our cookery classes, had heard about our new venture here and decided to pay us a visit. We went out for drinks and a catch up and as expected ended up talking about food…. more specifically Pasteis de Nata, the famous Portuguese Custard Tarts.

So, to cut a long story short, we loved having them here and decided to dedicate this month’s recipe to their favourite Portuguese dessert. 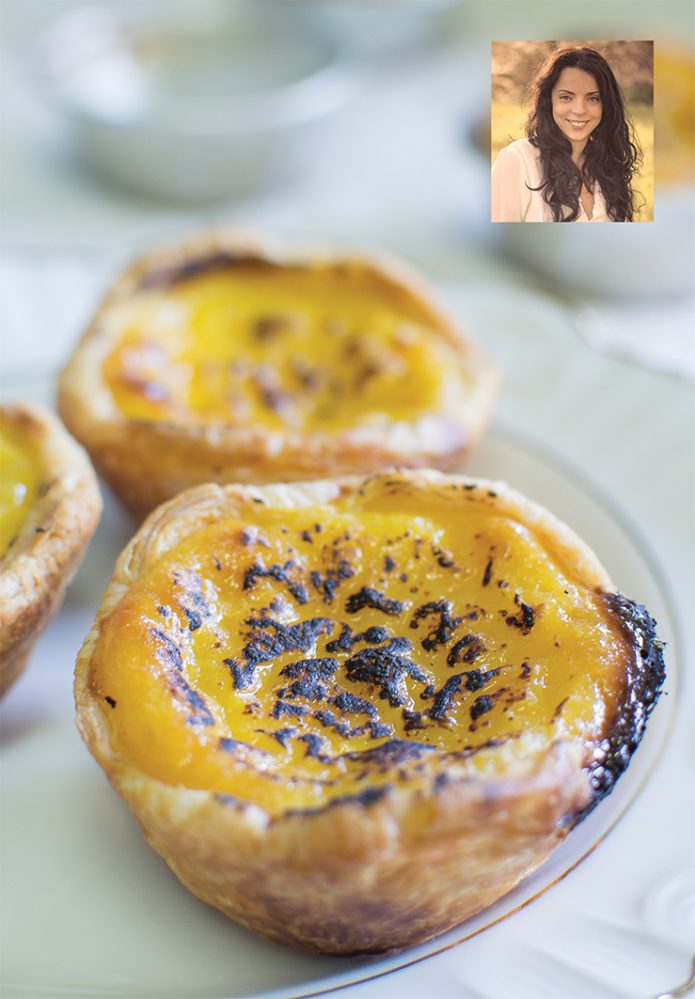 Butter for the moulds

Firstly grab a large bowl and measure the flour and salt into it and give it a mix (pic 1).

Tip #1: Make sure your salt is finely ground, as if you leave it coarse it will break through the pastry and ruin your layers.

Slowly add the water (pic 2) and combine all the ingredients with the help of a plastic dough scraper (pic 3) or a spoon. Once it starts to come together (pic 4), tip the bowl over onto the worktop, scraping all the bits of flour off your bowl, and knead the dough (pic 5) without adding any more flour to your table.

Tip #2:  If you add any more flour at this stage it will up-set the delicate flour/water balance.

Use the heel of your hand to push the dough away from you, then fold the flap back towards you and give it a quarter turn. Press down on another section of the dough and do the same thing. Knead it for 10 minutes or until the dough is smooth, soft, supple and elastic – it shouldn’t feel tacky.

Tip #3:  If you are using an electric mixer, use the dough hook and mix on medium speed for 5 to 7 minutes, or as long as it takes to create a smooth dough. The dough should clear the sides of the bowl but stick to the bottom of the bowl. The finished dough will be springy, elastic, not tacky or sticky.

Sprinkle flour on your work surface and place the dough on top. Cover with a damp tea towel or cling film and allow it to rest for about 15 minutes to relax the gluten.

Once rested, roll out the ball from the centre out until you have a rectangle about 50cm x 70cm (pic 6). Cover loosely with cling film.

Tip #4:  Place the butter/margarine in between 2 sheets of parchment paper and beat it with a rolling pin, then roll it out to size. If you prefer to use butter please go ahead and do so, professional recipes these days all use margarine but back in the day it used to be all lard or a mixture of lard and butter.

Roll out your block of butter/margarine (pic 7), which should be firm but not too cold, to 1cm thick, or half the size of the dough rectangle (25cm X 25cm).

Tip #5:  There are several ways to fold and layer dough but we are giving you the simplest one, if you are a bit more experienced go ahead and fold it into thirds like a letter. 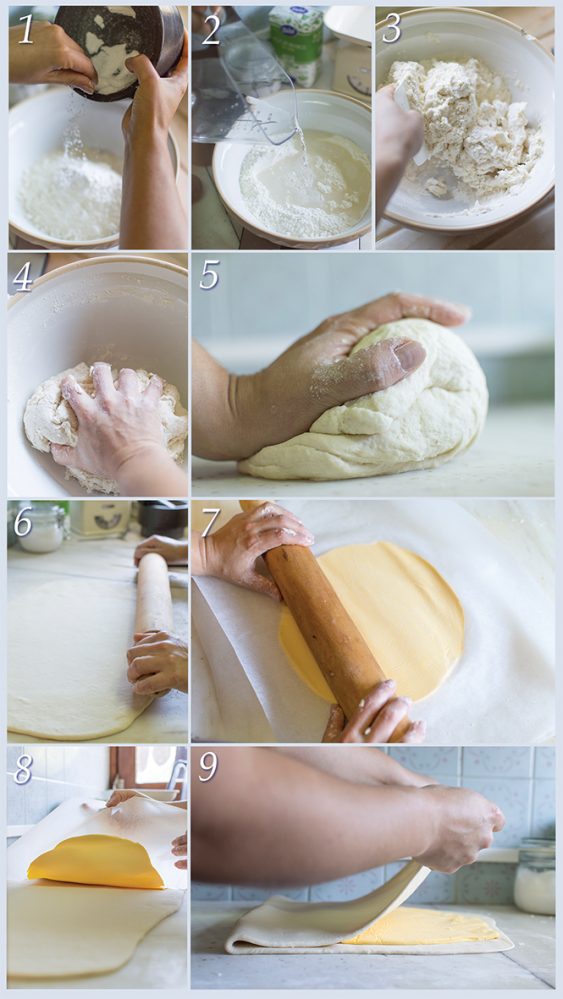 Lightly flour your work surface then roll the dough, away from you, into a rectangle of about 30 X 50 cm. Brush the excess flour off the dough and fold in half (pic 10). Wrap in cling film and refrigerate for 15 minutes. Repeat another 2 times, rotating the dough 90 degrees each time.

Tip #6:  Always brush away any excess flour on your dough or the sides won’t stick together and you might have air bubbles.

After the last fold and rest, return the dough to your lightly floured work surface and roll it again, away from you, into a rectangle of about 30 X 50 cm. This time roll it into a tube like you would do for a Swiss roll (pic 11).

Slice into 1.5cm portions, and place them in the centre of the buttered moulds, cut edge facing down, and let it rest for about 5 minutes (pic 12 + 13).

Tip #7:  We use the traditional aluminium shapes but any cupcake shape will do as long as they are not the soft silicone type.

Now it’s time to form the shells of the Pasteis de Nata, so take a small bowl of cold water and wet the tips of your fingers in it. Place your fingers in the centre of the roll of dough and start pushing the pastry up the sides of the baking moulds, forming a thinner bottom and rim around the top edge (pic 14).

Place all the shapes in an oven tray ready to go. 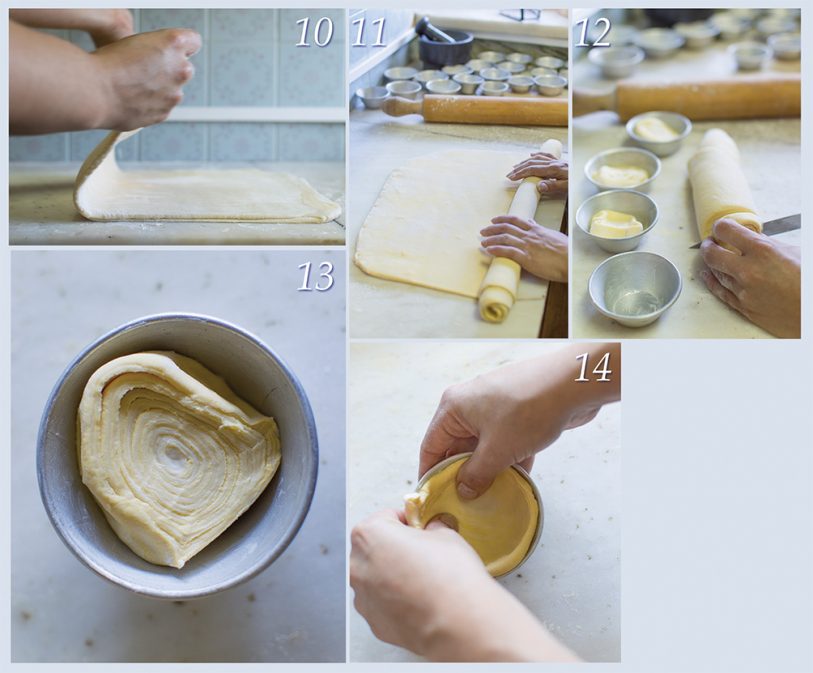 The first thing to do is the sugar syrup, so take a heavy bottom pan and place the water, sugar, cinnamon and lemon peel over a high flame. Bring to a boil and stir to dissolve the sugar. Leave to boil for 3 minutes and turn off the heat.

In a separate bowl measure the flour and corn starch and dissolve them in a bit of the milk. Add the egg yolks, one by one and reserve (pic 15). Place the rest of the milk in a pan and bring it to the boil. Slowly add it to the egg yolk mixture, mixing constantly.

Tip #8:  Add the milk very slowly at the beginning to avoid cooking your eggs. Also keep stirring at all times.

Add 165ml of the sugar syrup to the mix (pic 16) and sieve the whole thing through a fine mesh.

Your oven must be set for at least 250C and be well warmed up.

Tip #9:  This is really important as they need high temperatures to cook fast. In the bakeries here they are cooked at 350C to 400C.

Once you are ready to bake your tarts simply fill the baking moulds taking care not to go all the way to the top as they will spill over during cooking (pic 17). Bake for 10 to 15 minutes until the pastry is flaky and the tops are turn-ing dark brown. Turn the tray half way through.

Tip #10:  Every oven will be different and the cooking times will vary a lot so keep a close eye on them to prevent them from burning.

Remove from the oven, let them cool a bit, unmould with the help of a knife and dust the Pastéis de Nata with lots of ground cinnamon. 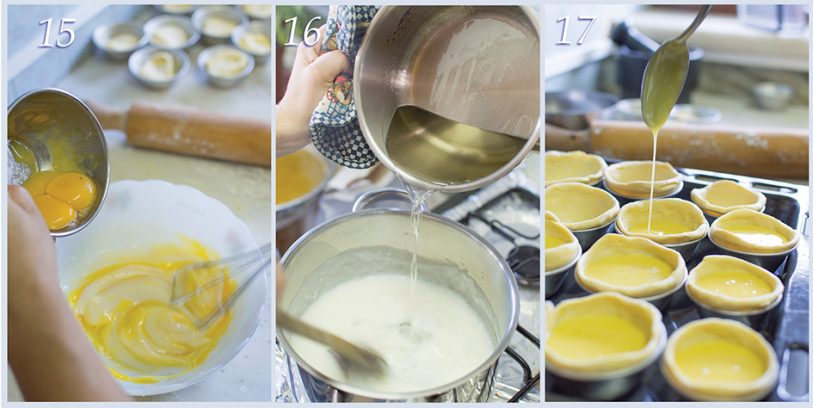