IN APRIL HE STAYED IN THE IMPRESSIVE NEW HOTEL FOOTBALL IN MANCHESTER. 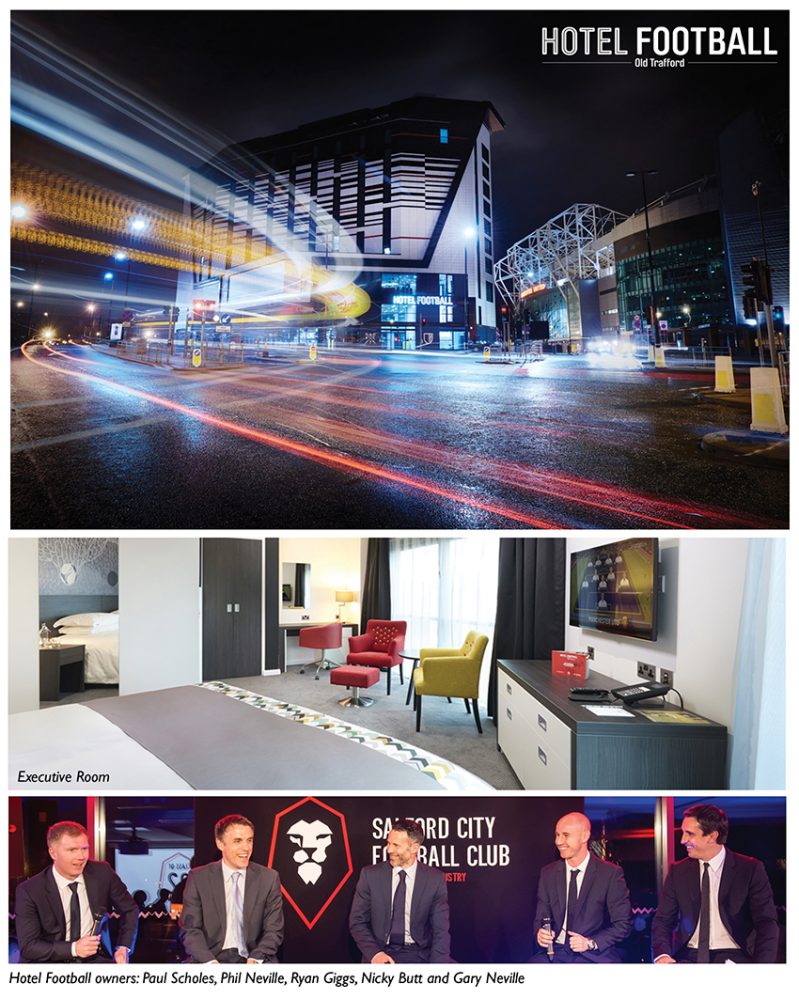 Lovers of many things Welsh, eye-catching art-work, football in general and Manchester United in particular will love Hotel Football, a four-star, 133-room hotel that opened in March.

Owned equally by Ryan Giggs, Gary and Phil Neville, Paul Scholes and Nicky Butt, it stands a mere 50 yards from Old Trafford, with all executive and half of the standard rooms overlooking the Theatre of Dreams.

Five years in development – the initial plan was merely for a supporters’ club, (duly delivered, the Old Trafford Supporters’ Club, a smart sports bar occupying the building’s basement) but the concept grew and now numerous neat touches exemplify the hands-on approach the five have taken to enhance the guest experience.

Turning on the television in my seventh-floor, executive room, I find a wonderful clip portraying a spontaneous kick-about involving the five taking on builders working on the hotel’s top-floor five-a-side pitch. If you can’t wait to see it when staying, Google ‘Class of ’92 vs. the Builders’ to view it on YouTube. Universal, clever and amusing, it proves this hotel (and its owners, Ryan Giggs in particular,) does not take life too seriously.

This levity is enhanced by the paper bag of sweets and packet of chocolate footballs awaiting me on arrival (a charming contrast to the elegant Ladurée macarons at Paris’s MGallery Molitor reviewed last year) and tea mugs in red and blue. The obvious message is Manchester City fans are as welcome here as their red Mancunian brethren and, by extension, all followers of football feel included. A mini football is a delightful souvenir.

All rooms incorporate art from Salford University students (Gary Neville and Giggs studied 200 pieces before choosing 150) and mine is of a net and pitch markings. 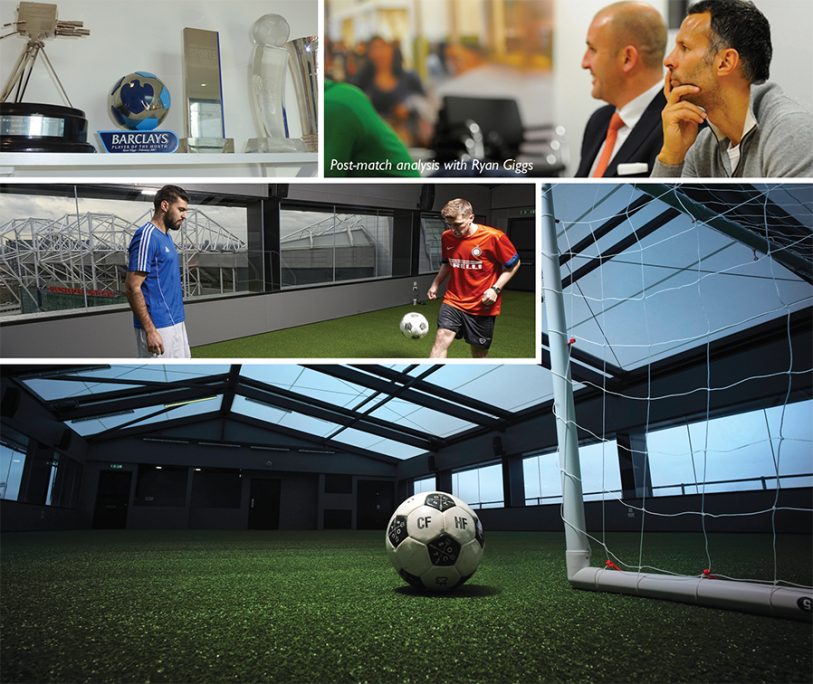 When waiting for the lift to meet operations manager Michael Falla for my tour, I see the corridor’s wallpaper is made up of hundreds of Panini stickers, so fans can have fun finding their team represented. Compounding the deliciousness, if you order a panini via room service, it arrives in greaseproof paper sporting a similar Panini design!

First stop on my tour is the afore-mentioned five-a-side pitch, a multi-purpose space called ‘Heaven’.

A ball rests invitingly on the Astroturf, and Michael kindly agrees to go in goal for an impromptu penalty. A side-foot, and the ball nestles in the net. I quit while I’m ahead.

Michael explains this space can be hired for parties for children and adults (it’s already had its first marriage proposal, and a civil ceremony may follow in August) while a mere £10 per person buys football for two hours.

Mischievously, Manchester City fans have remarked that if this building’s top storey is ‘Heaven’ that makes its lowest level, home to the Old Trafford Supporters’ Club, Hell.

Next it’s on to the Class of ’92 Suite, complete with the boots in which Giggs scored the winning penalty in the 2008 Champions League Final and his BBC Sports Personality of the Year award. This intimate room caters for up to 16 people.

The Café Football restaurant continues the amazing art, where I spot my first direct reference to Swansea City (drop in to find out…)

My tour has taken 70 minutes, test-ament to the host of features dreamt up during years of planning.

The dress code to dine is casual – I wear England cricket attire – but many guests sport eveningwear and dinner jackets for a function at Old Trafford later. The reason-ably priced menu has excellent options for all, and as a long-time admirer of Gianfranco Zola OBE I choose the fantastically flavoursome four-cheese ‘Goal & Zola’ pizza.

Many dishes are in homage to footballing greats, the Wizard burger, a tribute to Ryan Giggs, made using Daphne’s Original Welsh Lamb, from sheep reared on land of up to 1,000ft of elevation in sight of Snowdonia.

For dessert I choose the Turf; a praline cake resembling just that.

A work of art in itself, it looks too good to eat, but there’s research to be done…

With central Manchester a five-minute taxi ride away and the Lowry Centre a 15-minute stroll there’s much nightlife near, but I plump for an evening watching sport before a restful sleep in a sumptuous Hypnos bed.

My room’s floor-to-ceiling windows face south and west (bring binoculars to study the view) and increase its expansive feel.

The next morning, after a filling full English breakfast, with until noon to check out, I watch United fans gravitate to the ground just to be near their team’s home (United play at Chelsea later.)

Hotel Football gives them, and football fans in general, a soulful celebration of their beautiful game.