The Cine Files with Sofiane Ziad 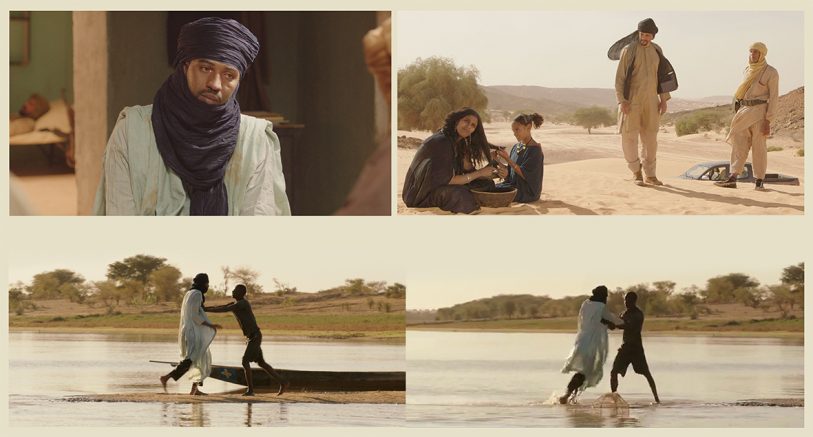 A HEART-BREAKING, VISUAL BALLADRY OF ONE NATION’S FIGHT FOR SURVIVAL

Timbuktu, 2012. An establishing shot of a gazelle running for its life in the dunes of Mali opens the film. All that can be heard is the haunting wail of the wind as the audience watches the terrified animal desperately searching for sanctuary. We soon discover that members of the Islamic extremist group ISIL, who have recently taken over the city of Timbuktu, are using the gazelle as a shooting target. Without warning, an eruption of gunshots takes over the diegetic sound and we hear a voice from one of the group members shouting: “Don’t kill it! Exhaust it!”

This image cuts to a panning shot of masks, carvings and statues, which have been destroyed by the group, lying in the sand of the Sahara like mutilated cadavers. This fore shadowing image not only prepares the audience for the introduction of Sharia Law in the city (and the cruel punishments that are associated with it) but also exemplifies the extremist group’s desire to eradicate any pre-existing culture that opposes their rules.

These opening images work to set the bleak tone of this harrowing film: the rules of ISIL are not for the benefit of the community of Timbuktu, but rather to ‘exhaust’ its identity. Despite being released in France last year, the film’s subject matter has become more relevant today. The recent reports of Islamic State now controlling over half of Syria and their destruction of ancient cultural sites and artefacts in Palmyra means this film will resonate deeply with contemporary audiences.

The film, winner of two prizes at the 2014 Cannes Film Festival and nom-inated for an Academy Award for Best Foreign Language Film, predominantly follows the life of cattle herder Kidane (Ibrahim Ahmed), who lives on the outskirts of Timbuktu with his wife Satima (Toulou Kiki), and their daughter Toya (Layla Walet Mohamed). When Kidane discovers that a local fisherman killed one of his beloved cows “GPS” (a fitting representation for the death of the country’s cultural direction), he travels to the Niger River where the fisherman works to question his actions. A fight between the two men ends with the fisherman being accidently shot by Kidane. The main plot of the film is played out through a realistic narrative; the events, as with real life, unfold at a regular pace through the use of un-interrupted long takes, creating a sophisticated level of verisimilitude.

Throughout the film director Abderrahmane Sissako skilfully contrasts the dramatic and beautiful terrain of Timbuktu against the brutality of ISIL. In an early scene, Satima and Toya are shown in a wide shot sitting in the dunes near their home towards the left foreground of the screen. A car carrying members of the jihadists slowly emerges from the desert landscape in the background towards the right side of the foreground. The girl and her mother, who at the beginning of the scene dominated the screen, are now subverted into a vulnerable state as the extremist members approach and stand over the two characters, invading their personal space. Sissako uses this shot to convey how the intrusion of the jihadists represents a control of the political and geographical landscape of Mali – symbolised by Kidane and his family.

Whilst the extremists continue to transform Timbuktu into an authoritarian theocracy, adultery, football, and playing music are all prohibited, and women are ordered to conduct themselves with decency at all times. The jihadists depicted are not murderous tyrants, but are perplexed disrupters who face a continuing battle with a community defiant in defending their heritage against the occupation. Sissako utilises the jihadists to convey the irony and contradictions that exist within this group; in one scene, a member of ISIL teaches a reluctant recruit how to make a successful and convincing propaganda video. This scene illustrates the fallacy behind such groups that indoctrinate individuals who are groomed for membership, in accordance with the distorted beliefs of Islamic extremism.

In another scene, young boys from the city are shown playing football with an imaginary ball, highlighting the absurdity of ISIL’s rules. The rules are made more ridiculous when juxtaposed with the scene that shows the hypocritical

terrorists discussing Zinedine Zidane’s performance history in World Cups. These segments of the film may seem disjointed, as with Sissako’s introduction of characters, but they work to both resemble the natural rhythm of the city and for the audience to take on the role as an omniscient observer of the struggles facing the community.

The film’s cinematography is one that should be used as a blueprint by all directors of photography, one in particular being the impressive crossing of the river scene: Kidane, after discovering the horror of his actions in accidently killing the fisherman, desperately escapes from the scene of the crime in a single wide shot of the protagonist stumbling across the river, with his trail cutting through the middle of the screen that leaves a lasting impression on the water. The partition left by his trial symbolises both the metaphorical path of destruction that will catch up with him later in the film, and the religious and cultural divide that exists in Mali.

Sissako closes the film with the young Toya running hysterically through the dunes, but from what the audience is unsure. The film comes full circle, however this time it is a child and not an animal that appears to be in fear of its safety, highlighting the escalating tragedy that faces the next generation of Mali.

Timbuktu is a compelling, yet ultimately devastating film that will leave you welling up with tears of anger. 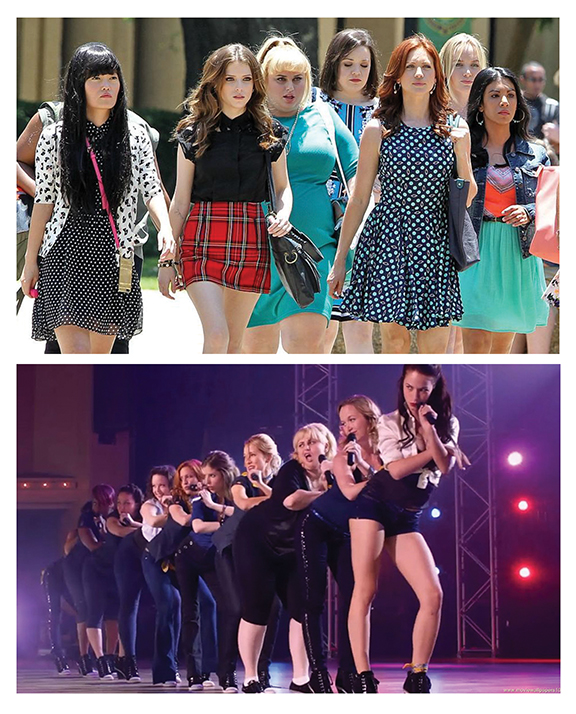 THE BELLAS ARE BACK, BUT WITH A FEW FLAT NOTES

To some, a musical movie might be their idea of a cinematic nightmare. But for others, a worse fate is a musical movie that’s made enough money to produce a dire sequel. Pitch Perfect 2 is a perfect example of this, the follow-up to the 2012 global hit that saw an all-female, college a capella group, the Barden University Bellas, claim victory at the U.S. national championships.

After a successful three years the group, led by Beca Mitchell (Anna Kendrick) and Chloe Beale (Brittany Snow), are asked to perform for President Obama’s birthday when Patricia “Fat Amy’s” (Rebel Wilson) solo turns into an eye-watering wardrobe malfunction. The mortified group become a national embarrassment and, in order to regain their status as America’s aca-awesome performers, they take their chances in entering an international a cappella competition, held in Copenhagen, that no American team has ever won. With the odds stacked against them, the group must find inspiration within each other to defeat their rival singing team from Germany: Das Sound Machine (DSM).

Poor character development, hampered further by sloppy musical executions, means that the cult following will find this film amateurish compared to its predecessor. However, what is most worrying about the sequel is the perpetuation of racial stereotypes that sees a reversion back to the racism found in Classical Hollywood cinema. The film continually embraces the stereotypes associated with the Latin, Asian, and gay characters they were ridiculing.

In addition, when Pieter Krämer (played by Flula Borg), DSM’s co-leader, talks to the Barden Bellas during his first scene, the audience will notice that a Volkswagen logo can be seen over his shoulder at a car show the group are performing at. Perhaps this is just an innocent product placement. However, this is not made any better by the fact that the fluent German singing group only sing English songs which serve to exaggerate the clichéd ways native English speakers mimic a German accent. It could be that first-time director Elizabeth Banks, who also reprises her role as Gail Abernathy

McKadden-Feinberger, the a capella competition commentator, did not want to alienate American audiences with ‘foreign’ musical numbers. Despite this, the result is that DSM become yet another minority group who suffer at the hands of ‘casual racism’.

If it weren’t for the obvious issues with the film, the Pitch Perfect franchise could have carved the way for a revolutionised and evolved type of teen film: one where self-sufficient women are united and unafraid to engage in unceremonious humour that challenges the patriarchal expectations on what women can joke about. If you compare this film to the American teen movies of the 1990s, they typically involve a hierarchy of adolescent female cliques competing against one another over vacuous matters, where aesthetics trumps comedy.

The musical scores in this movie dominated the overall plot direction but, let’s face it, this film is essentially just an extended collection of musical numbers. Therefore, the plot should not play a huge part when it comes to the critiquing of this film. Fans of the original movie will watch this film mainly for the performances, just as with the once popular but now ended American TV show Glee. As a result, perennial faults of such franchises, such as most of the characters playing college students looking more like ‘mature’ students, become irrelevant; the film is supposed to be a joyous amalgamation of music that is not intended to be reflective of real life – much like Grease.

In essence, Pitch Perfect 2 serves a discordant mix of random musical scenes that regurgitate scenarios and gags from the original film. The creative bankruptcy and lack of cohesiveness within the film means it is missing the important re-watchable element, steering the film towards a disappointing finale.