It is a sunny summer’s day and you are walking along a scenic path fringed with wild flowers. Suddenly a black and yellow insect flies up from a flower and hovers on the spot, right in front of your face, looking you deep in the eye. Is it time to panic and run? Looking back at its big chestnut brown eyes you smile – the hovering has given it away: despite the colours there is nothing to worry about, it is only a hoverfly saying hello.

And as you are still contemplating this, your stripy new friend has already shot off again at breakneck speed, in search of another flower.

The hoverflies (family Syrphidae) are undoubtedly the most charismatic group of flies. Many are colourful and easy to observe because they have a particular fondness for large, flat flowerheads on which they spend a lot of time, feeding on nectar and pollen as well as just basking in the sun.

Hoverflies get their name from their ability to hover in mid-air. In addition to this distinctive skill, they are very fast and agile flyers in general, which is just as well be-cause aside from their aerial skills and lightning reflexes they are totally defenceless. This is why many of the 281 British species have taken to imitating more formidable insects, namely wasps and bees (including bumblebees) 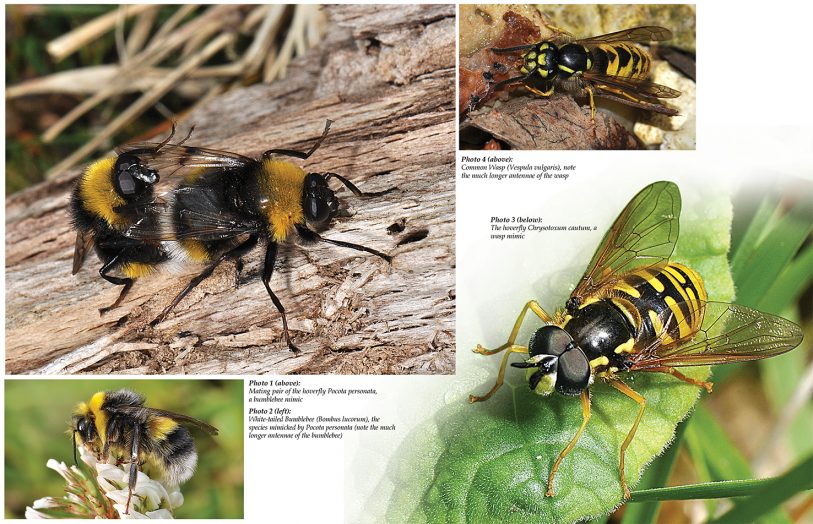 Some hoverflies will even pretend to sting by pushing their (unarmed) rear into their attacker when they are picked up, in a last-ditch attempt to get themselves released.

The quality of the mimicry in some hoverfly species is quite remarkable, so much so that it is sometimes even possible to tell which particular species of bee or wasp a hoverfly is pretending to be. One example of such near perfect mimicry is the rare Pocota personata (photo 1) which beautifully emulates the White-tailed Bumblebee (Bombus lucorum) (photo 2). Most other hoverflies mimic the colours, pattern and body shape of either a bee, bumblebee or wasp in a more general way, for example Chrysotoxum cautum (photo 3) which mimics the appear-ance of a social wasp such as the Common Wasp (Vespula vulgaris) (photo 4).

The main difference between hoverflies and the bees and wasps they mimic is that hoverflies only have two wings, whereas bees and wasps have four. The number of wings, however, is often not easy to see – certainly not in flight – and it can also be tricky to determine when the wings are folded up.

The antennae are a distinguishing feature which is rather easier to see. Hoverflies tend to have much shorter antennae than bees and wasps. A comparison of the hoverflies in photos 1 and 3 with the bumble-bee and wasp in photos 2 and 4 illustrates this difference very well, while at the same time showing how hard it is to see that the bumblebee and wasp actually have four wings.

A third difference which is often readily visible when looking at the insects from above is that bees and wasps have a distinctive narrow ‘waist’ between their thorax and abdomen, whereas hoverflies, despite their best efforts, are unable to achieve quite such a svelte figure.

When we first encounter hoverflies in their beau-tiful adult form, they are already in the final few weeks of their lives.

But while they only live for a matter of weeks as adults, they spend several months, and sometimes even years, living a lot more inconspicuously as larvae. Depending on species, hoverfly larvae either feed on plant matter (commonly rotting plant matter) or they are active predators, usually feeding on aphids. As a result, the latter are considered gardeners’ friends and are even reared and sold as biological control agents. The main species used commercially in such a way is the dainty Marmalade Hoverfly (photo 5, named after its distinctive shade of orange) which is also one of the most common species in Britain in the wild. Its larvae can tackle aphids several times their size, and each larva eats several hundred of them before it is ready to pupate. Predatory larvae are often brown or green to blend in with the vegetation (photo 6). 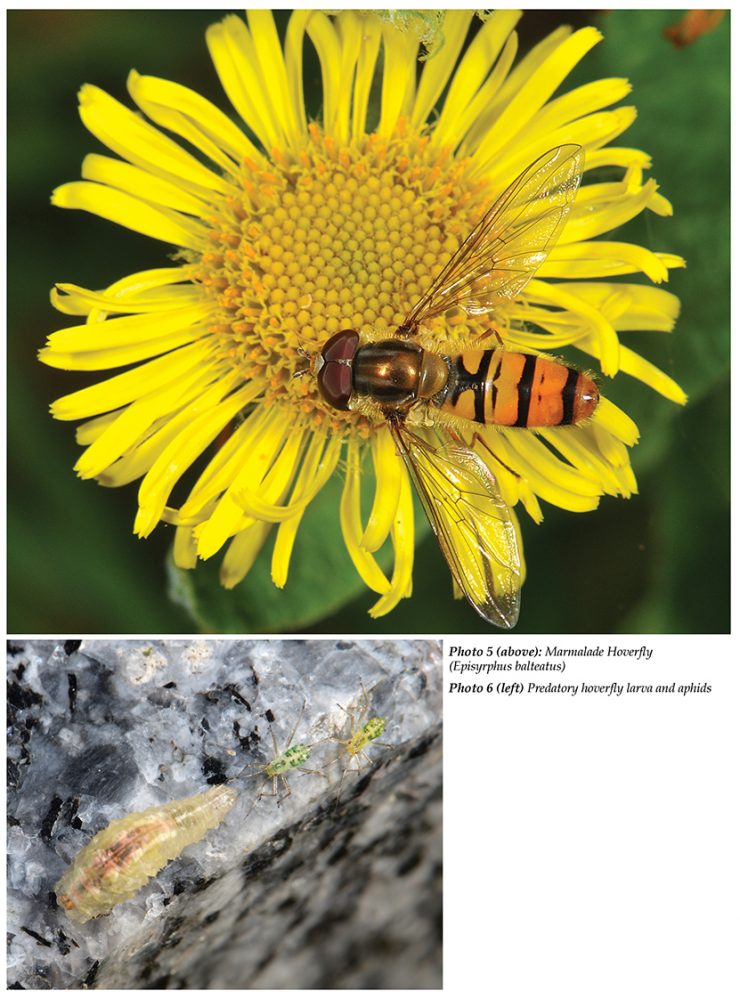 Larvae which feed on plant matter are usually white as they live hidden among their food source or even underwater, for example in water-filled tree holes or ditches. Stagnant water containing lots of rotting organic matter is poor in oxygen, so some hoverfly larvae have evolved a flexible breathing tube which can stretch to several times their body length and with which they can reach the surface to breathe air while continuing to feed underwater. This allows them to exploit a habitat and food source few other animals can utilize. Because their ingenious breathing tube is long and thin and extends from their hind end, these larvae are unflatteringly referred to as ‘rat-tailed maggots’. The Dronefly (Eristalis tenax) which often congregates in large numbers on ivy flowers and its close relative Eristalis nemorum (photo 7, showing a male hovering over a female during courtship) are two examples of hoverflies which spend their youth as rat-tailed maggots.

Not only are hoverflies exceptionally useful in controlling aphid populations and help to break down organic matter, they are also important pollinators. But of course, there has to be a black sheep in every family, and in the case of hoverflies this is the Narcissus Fly (Merodon equestris) whose larvae like to eat the inside of bulbs (particularly daffodils, but they are not too fussy and will also eat other bulbs such as snowdrops). Obviously, this culinary preference is at odds with the aesthetic preference of gardeners. Luckily Narcissus Flies rarely cause severe damage in garden settings, but they can become a problem for commercial growers where large numbers of daffodils are grown close together. The Narcissus Fly occurs in three colour forms: all black, black with yellow and brown as well as all yellow and brown, with the all yellow and brown form shown in photo 8.

Narcissus Flies emerge in late spring and early summer and are not usually seen later in the year. The majority of hoverflies, however, will be out and about over the next few weeks. Fuelled by the summer warmth, sunshine and plentiful nectar they will be at their most active. Males will be squabbling over the best territories with the tastiest flowers and the sunniest leaves that will attract the most females, and females will be busy feeding on nutritious pollen to produce large, healthy eggs and looking for the perfect places to lay them. And there will, of course, be a lot of hovering!

Regular readers will recognise the book that we have on offer as a competition prize this month. TheBAY contributor, Isabella Brey’s, Insect or Bug of the Month articles are always superbly illustrated with photographs by Paul D Brock, Scientific Associate of the Natural History Museum.

Paul has had his book A Comprehensive Guide to Insects of Britain & Ireland recently reprinted and we are delighted to have a copy worth £28.95 to give away courtesy of ecological consultancy, naturebureau.

To enter the competition, simply answer this question:

Send your answer along with your name, address and daytime telephone number to Lesley@theswanseabay.co.uk or Insects Competition, 1 Cae Banc, Sketty, Swansea SA2 9DN. 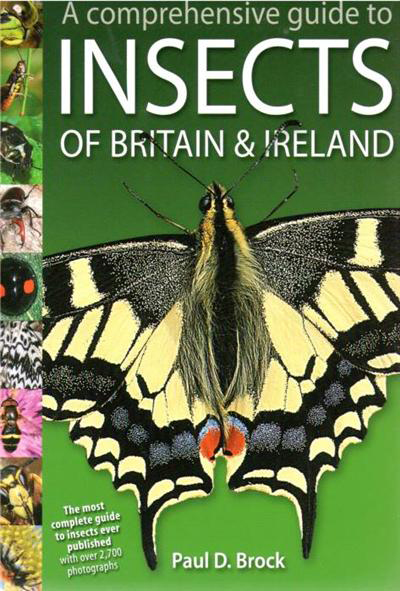