ASHLEY LOVERING is the man behind the increasingly popular SWANSEA FESTIVAL OF TRANSPORT.

He has seen the festival grow since the very first one that was held at Swansea Airport on Fairwood Common back in 1994, which attracted approximately 80 vehicles to this year’s event that showcased over 500 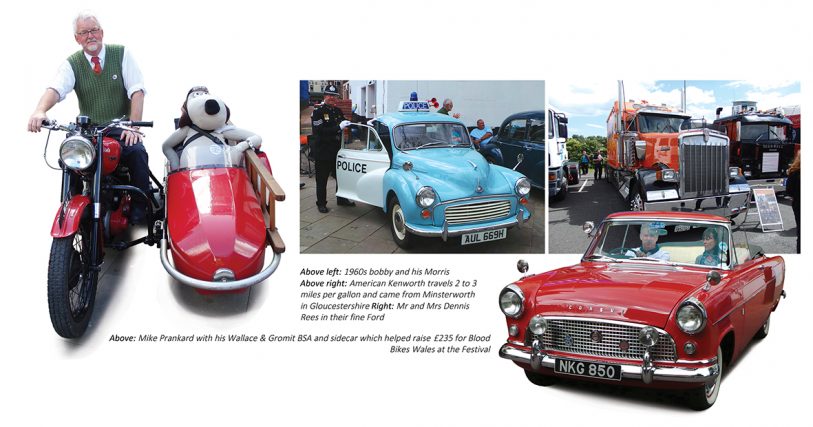 The 22nd Swansea Festival of Transport took place on the streets of the city centre Sunday 21st of June.  A vast range of vintage, classic, modern and modified vehicles of all types were on display. Some replica film vehicles arrived, such as an A Team Van, Knight Rider car, Wallace & Gromit motorcycle and sidecar which proved very popular with children and adults alike.

The Big American Classics including Mustangs and the Chevrolet Belair were parked overlooking Castle Square which had Minis, MGs and other well-known British classics on show.

Jaguar E Types are always good to see and several were dotted around the show areas. Old family favourites such as the BMC 1100, Ford Cortina, Ford Popular, Morris 1000 car, van and Traveller were also displayed.

A fine selection of scooters by Lambretta and Vespa were on show – all in fine condition with an array of badges, lights and plenty of gleaming chrome work.

It was rather nice to see the open top double decker buses from the Swansea Bus Museum giving free rides around the city; these proved very popular with people of all ages.

It was also lovely to see classic buses and coaches displayed at the Waterfront Museum which also formed part of the Festival. Classic and modern trucks also came along with their highly polished chrome-work and different liveries.

It was great to see the city centre full of people enjoying the 500 plus exhibits and taking loads of photographs and talking with the vehicle owners. I now look forward to the next event in the city centre on Sunday 19th of June 2016.