This month KIM JONES offers us a family friendly ride around the coast of Carmarthen. It’s a route that John Ashley has previously taken as a walk and it makes an equally enjoyable bike ride ‘Mummy, will the sea get hotter when the sun drops into it?’ I smiled, looked up and could see what had prompted this wonderfully innocent remark. We waited for the phsst and the burbling but were to be disappointed; the sun simply dropped out of view. It’s such a shame a lot of us lose the remarkable sense of wonder that we are all born with. The young boy looked over to me questioningly, I shrugged my shoulders whilst mum shook her head. I got back on my bike and rode home, snacking on flies along the way. 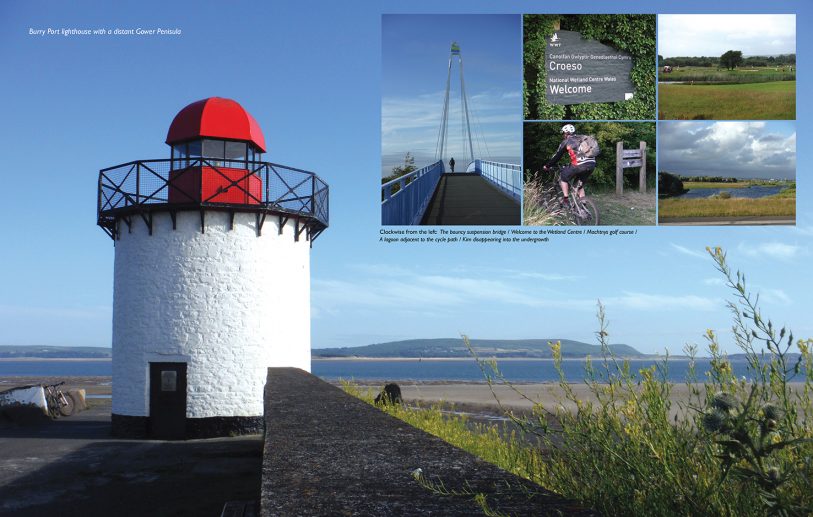 The Millennium Coastal Path lies between Llanelli beach (I know, who’d have thought?!) and Pembrey Country Park and is approximately 23km long, however if you wish a longer trip you can start from Bynea taking the national cycle network route 4 which follows a similar course and takes you over the A484 on a fantastic suspended bridge that given some gentle persuasion has been known to bounce a little! It must be said that Llanelli council do a great job of maintaining this path, the verges are always neatly cut and the surface is maintained to a very high standard and apart from a few obvious signs there is little evidence of the heavy industrial heritage of the past. Looking across from Gower, the skyline would have been dominated by factories producing iron ore, tinplate, copper, lead and steel and of course the iconic 3 towers of the Carmarthen Bay power station. The area was also home to a brick-works and a chemical plant. These have all long since gone, but if you look on the beach amongst the rocks you will find bricks that have been sculpted over the years by the sea to produce some ovely shapes and colours.

This traffic free route is an absolute pleasure to cycle, with numerous café stops and plenty to occupy both young and adult minds alike along the way. If you choose to start at Bynea your first opportunity for a cuppa is the National Wetland Centre, this in itself is well worth a visit. There’s 450 acres of lagoons, pools and reed beds which are an absolute haven for wildlife, the coffee’s not bad either. A few years ago, on a night ride, a friend was lucky enough to stumble across an otter here, in the light of his headlamp he mistook it for a small dog running towards him and stopped his bike. The otter slowed down before stopping between his wheels where it stayed for a few seconds before looking up and running off.

The next section takes you behind the current sea defences; these are a relatively recent construction but if you take the time to look around you will see signs of some which date back to medieval times. Historically these were used to reclaim the land back from the sea, in fact Machyns, now home to the golf course and a recent housing development was once an island. There are small lagoons adjacent to the path along its entire length which are used by ducks, swans and a variety of sea birds, but here there are an abundance of rabbits, some of whom are quite brazen, often giving me a long cold stare before bolting into the undergrowth. As a good friend who has lived in Llanelli all his life said: ‘It’s not like Swansea!’

If the weather is against you then the visitor centre situated adjacent to the old North Dock is a great place to break the journey as the café upstairs offers great views out over the estuary and can be a haven from the wind. If the sun is shining, head out onto the balcony to enjoy your refreshments and watch the kite and wind-surfers at play on the water. There is also bike hire here too though at the time of writing it appeared to be closed. If you choose to start your journey from the centre, there is ample safe parking and a great park for the children.

Continuing your journey onwards towards Pembrey, don’t be tempt-ed to follow route 4 of the cycle network, but stay close to the beach heading over the railway line and skirting the edge of Sandy Water Park. This is a lovely stretch of water circumnavigated by a path and rather conveniently home to the Sandpiper pub, which seems to have an area exclusively for over 78s, at least that’s what the sign said?!

I love the next segment; having crossed back over the railway line, there are lots of different paths to explore here both on bike and on foot. There are even two short way-marked mountain bike loops; one of which takes you around the lakes, the other along some great single tracks before popping you back onto the main path. 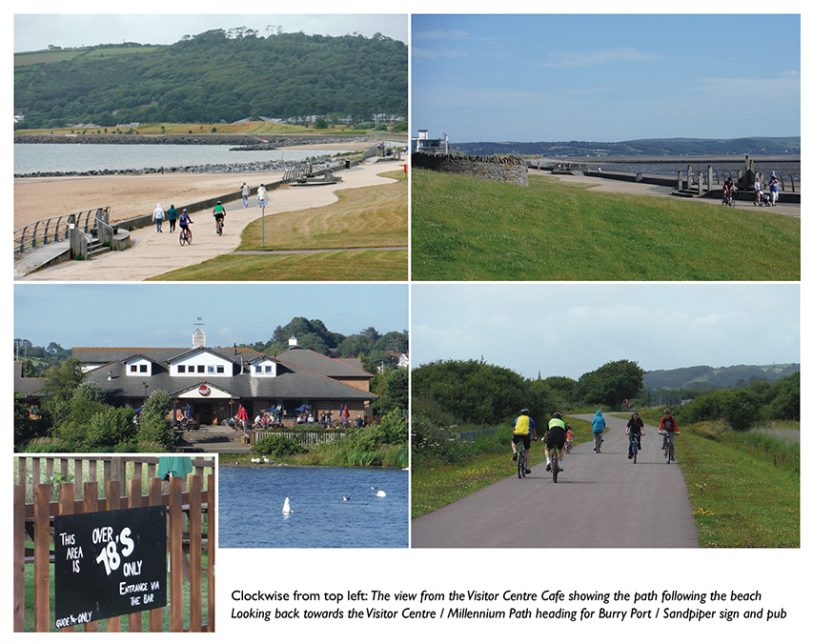 A short diversion down alongside the estuary takes you to the docking bay of the sand dredger and if you’re lucky you will see it discharging its load through a great worm like pipe. It’s almost time for another cuppa now so onto Burry Port harbour and the Lighthouse Café. The village around the harbour came into existence as a direct result of the docks being built in 1832. This replaced Pembrey Harbour which is just around the corner. Originally used to export coal from the nearby Gwendraeth valley it all changed with the opening of Brunel’s railway in 1852. The line which ran between Swansea and Carmarthen enabled the transportation of coal, metal and various other industrial goods which were then exported far afield from Burry Port. The area became a thriving town and the focus for many new industries which relied on the port for export. This era finally came to an end with the demolition of the power station in 2004 and now the village is home to a thriving marina and also acts as a convenient launch spot into the estuary.

From here it’s only a short spin to Pembrey, but it is certainly worth the effort as Pembrey Country Park has a multitude of activities on offer, from tobogganing to horse riding. Also by arriving on bike you avoid the entrance fee! Pembrey sands or Cefn Sidan beach as it is known, borders a notoriously dangerous stretch of water which over the years has caused over 500 vessels to have floundered in the estuary. Some of these lie under the sands within the park due to the erosion of the sea, but many are visible from time to time. It’s a peculiar stretch of coastline as the sands are constantly shifting which causes the old wrecks to appear and disappear, consequently it’s a great place for beachcombing. Currently there is a skeleton of an old boat lying off Pembrey Harbour which is clearly visible at low water.

As you make your way towards Pembrey there are a wonderful array of benches seemingly built from the remains of the old harbour. Sit here a while and ponder your assault on the park, for shortly you will have to cycle past a gun emplacement guarding the entrance. I’ve always been lucky here and as yet have never been challenged or indeed shot at, but you never know….. 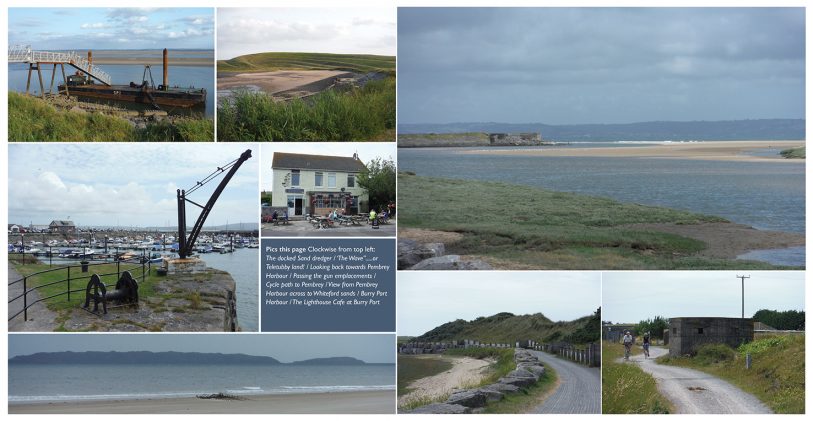 This gun emplacement dates back to the days when there was an ordinance factory on the site of the park which provided explosives used in the Second World War. Interestingly there was also an RAF base here where a certain Wing Commander Guy Gibson was based prior to his Dambuster days. Predating all this though is Saint Illtyd’s parish church which dates back to 1066 and is the oldest building in Pembrey village. Now it seemed that St Illtyd was a monk who liked to wander – there’s a walk named after him which to look at on a map, gives the impression that the man clearly enjoyed his mead as it seems to make its way haphazardly across the country-side before finishing at Margam Park where one assumes he slept until sober.

I must say I have thoroughly enjoyed my time both riding and researching this path as it’s been a while since I last visited. Next time the sun is shining, grab the kids and your bikes and enjoy a great day out.