Great Coffee with a Social Conscience

I was delighted to see that we had a new coffee shop open in Sketty earlier this year – it might look like another stylish coffee bar but there’s more to Square Peg Coffee House in Sketty than meets the eye. I met up with Matt and Josh to find out what makes this business venture different 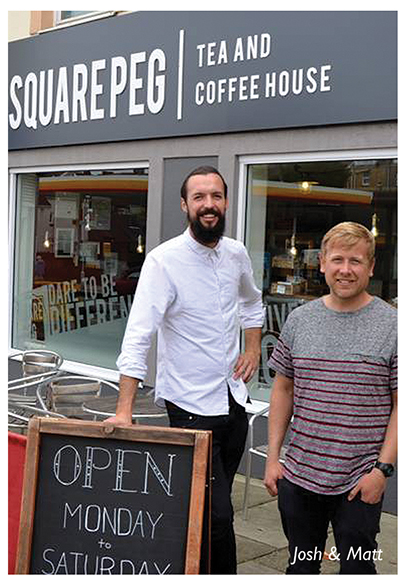 Square Peg Tea and Coffee House is the result of three years’ planning by the Swansea based social enterprise Poverty to Purpose.

“Our goal was twofold,” explains Matt Crome, Poverty to Purpose director. “The charitable aspect has always been a priority and we want-ed to create a sustainable business that allows us to give profits back across a range of levels. But we also wanted to create the kind of café we’d like to go to – a great looking space serving the best coffee around.”

It wasn’t easy, as being a new social enterprise they lacked the money necessary to make their dream happen. That was, until a mixture of crowd-funding and some generous support from the Swansea business community came to their aid.

They ran a campaign via Buzzbank, a crowd-funding platform especially for social enterprises. “The response to our campaign was amazing” Matt says. “But what was even more amazing was the way the local businesses in Swansea have come to our assistance. The help we have received has been overwhelming. It just shows how much people are willing to get behind a good cause.”

Now open in Sketty, Square Peg is dedicated to serving great tasting coffee. Matt and Josh the ‘coffee geeks’ are continually testing the coffee for consistency, trying new brewing methods and most importantly discovering the origins of their coffee. “Knowing the chain from cup to farmer is so important to us”, “Our new single origin coffee from El Salvador which we have just taken delivery of is as direct as you get, farmer to roaster. With this you know your drink is ethically sourced, the farmers are paid great rates and the farm and workers are looked after to a high standard”

In more ways than one Square Peg doesn’t want to be your average run of the mill coffee shop. Three years ago when this all started, the group at Square Peg had had enough of the status quo. Coffee culture was growing in the UK at a phenomenal rate and with the chains popping up everywhere they wanted to make a stand. “I love going for coffee, but was fed up of buying average coffee and not really knowing how the coffee was sourced or where the

profits were going was bugging me” says Matt. With the rise of the artisan coffee scene in London and places like Sydney shunning chains like Starbucks because of their love for the independent coffee shop, the team wanted to bring artisan coffee to Swansea.

Serving coffee the way you would expect in Sydney or London wasn’t enough as they still wanted to “be different”. Being a social enterprise allows the team to do this and use profits from the shop to support three different projects at a time. The two main charities supported are Swansea based Zac’s Place who work with the homeless in Swansea, offering personal support, soup runs, breakfast and more. Secondly is Kenya Children of Hope, which is based in Nairobi but pioneered by a couple from Swansea who have spent several years living out in Kenya working on the streets.

The project often works out in the ‘Kibera slum’ to find lost children who can be supported, and whenever possible re-united with their family after rehabilitation and support.

The ability to make a difference in Swansea and further afield by simply drinking a cup of coffee or eating a slice of cake felt like a great combination. Jamie Oliver’s fifteen restaurant chain was based on a similar principle: profits went to his charity foundation, but they also used the chain as a place to develop youngsters through apprenticeships. Square Peg is similar, a great place to get a cuppa, profits used for good causes and importantly, over the next six months they will be starting a unique apprentice scheme for local young people who need a helping hand into work.

It might seem like a crazy idea, or an unusual way of doing business, but at Square Peg different is good, different is better and the team really want to encourage others to support them and make a stance against the status quo. Pop in, have a coffee and chat to them to hear more of the story.

Healthy food, great coffee and tasty treats, all served in a stylish space with a large dose of social conscience. Sounds good to me.