The best of bugs

The word ‘bug’ usually brings to mind one of four things: a recent unspeakable disease and the evil microorganism that caused it, an annoying problem that is slowing down the laptop, a secret service listening device, or a small brown creepy-crawly. In science, however, the term ‘bugs’ is used to refer to something considerably more appealing, namely a fascinating group of insects (the order Hemiptera) which are defined by their highly evolved, hollow needle-like, sucking mouthparts. In Britain, probably the most attractive and certainly the most conspicuous representatives of this group are the shieldbugs. 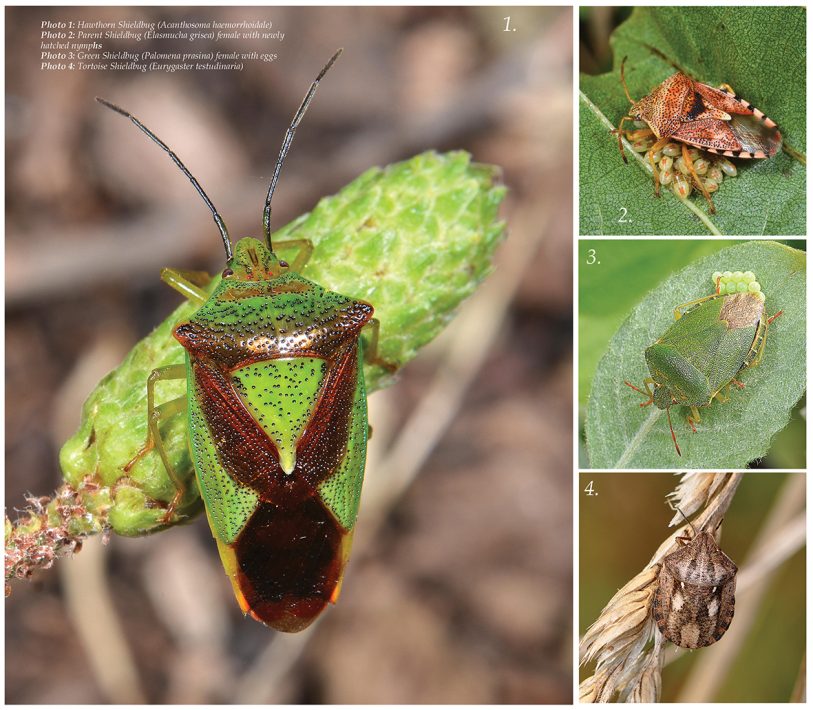 Shieldbugs get their name from their overall body shape which somewhat resembles a medieval shield. They superficially look like beetles, and while turning them over and taking a look at their mouthparts would immediately identify them as bugs due to their lack of jaws, luckily there is an easier way for both insect and observer, namely the appearance of their backs. Looking at a shieldbug from above, it is generally possible to see a large backward-pointing triangular plate called the scutellum. This is showing particularly well in photos 1 and 2. In most species this runs about two-thirds of the way along the back, and in many species the overlapping membranous wingtips are visible behind the scutellum (illustrated particularly clearly in photos 2 and 3). In one family, the tortoise shieldbugs, the scutellum is so large that it covers their entire back (photo 4), which makes them particularly easy to mistake for a small, rounded beetle. However, as their scutellum is a single plate, tortoise shieldbugs do not have the conspicuous straight line running down the centre of their backs along which beetles’ hardened forewings meet.

Another difference between beetles and shieldbugs is that beetles have a larval stage that is often completely different in appearance, behaviour and food source to the adult, whereas shieldbugs develop through a series of nymphal stages, all of which closely resemble the adults in their appearance and habits. The main difference between a nymph and an adult shieldbug is that the nymph does not yet have fully developed wings, though the developing wings are already visible on the back of the nymph as so-called ‘wing buds’, which get bigger at every moult. (photos 5, 7 and 8).  As adults, many shieldbugs are strong fliers and, particularly on warm summer days, they can sometimes be heard approaching with a sonorous buzz, before landing on one’s clothing with a plop.

The species most likely to introduce itself in such a manner is the Green Shieldbug (Palomena prasina), one of the biggest British shieldbugs reaching a length of up to 14mm (photo 3). In spring and summer Green Shieldbugs are true to their name and are bright apple green, but later in the year they turn darker and may even take on a rich brown colour in readiness for the winter which they spend as adults, hibernating in grass tussocks or leaf litter (photo 6). They re-emerge in April or May when they mate and lay their eggs. The pretty, roundish nymphs (photo 7) spend the summer feeding on the juices of a variety of plant species, during which time they grow and moult five times before maturing in late summer. 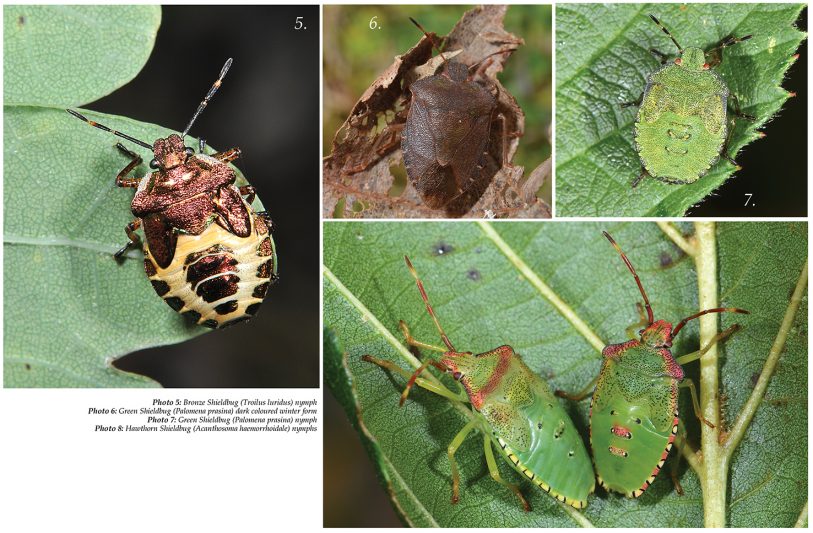 A similar life cycle is shared by the other 37 British shieldbug species. The majority of these are plant feeders like the Green Shieldbug. However, unlike the Green Shieldbug, many specialise in their choice of foodplants. The colourful Hawthorn Shieldbug (Acanthosoma haemorrhoidale) (photo 1) and its beautifully patterned nymphs (photo 8), for example feed primarily on hawthorn fruit.

The aptly named Parent Shieldbug (Elasmucha grisea) which likes to feed on birch and alder (particularly the developing seeds in the catkins), is quite exceptional in that it looks after not only its eggs but also its young. The female initially guards her eggs for two to three weeks until the nymphs hatch (photo 9). After this, she continues to stand guard over the nymphs (photo 2) and, when they are ready to start feeding, she guides them back and forth between their nursery leaf and suitable catkins for feeding. She continues to do this for around three weeks before she leaves the nymphs. The nymphs themselves stay together in groups until they mature (photo 10).

Unlike the majority of shieldbugs, the Spiked Shieldbug (Picromerus bidens) (photo 11) is a predator, feeding primarily on caterpillars. Spiked Shieldbugs are easily recognized by their sharply pointed ‘shoulders’. The photo

shows an unusual incidence of multitasking, in which a female Spiked Shieldbug feeds on a Buff-tip moth caterpillar while mating at the same time. Mating in shieldbugs can be a drawn-out affair taking several hours, and unusually among insects, it takes place with the pair facing in opposite directions. Mating shieldbugs are tightly joined and very unwilling to decouple, so much so that the collection of preserved shieldbugs at the Natural History Museum contains numerous specimens still joined together, even after death.

Shieldbugs are easy and rewarding insects to observe and study. Most are big enough to spot without difficulty, they are reasonably slow moving and most are beautifully coloured and patterned. Nymphs in particular can be extremely attractive, for example the nymph of the Bronze Shieldbug (Troilus luridus) which has a wonderful metallic sheen (photo 5).

When forging a closer acquaintance with a shieldbug it is useful to bear in mind that they are sometimes referred to as stinkbugs. This is because they are able to release a foul-smelling liquid from glands in their thorax to protect them-selves when they feel threatened, so gentle handling is advised. Despite this, they are actually eaten by humans in a number of countries including parts of South Africa, Malawi, India, Laos, Papua New Guinea and Mexico. Depending on country and species, they are eaten either raw or cooked, and before or after having undergone procedures to rid them of their defensive secretions. One popular Mexican recipe calls for the local species Atizies taxcoensis to be placed into tacos while still alive with only their heads crushed to stop them from wandering off, though more often they are made into salsa with tomatoes, chilies and onions. In comparison, British shieldbugs have an easy life. Here, most humans that pay any attention to them are only after a nice photo or two, in which case the shieldbugs are usually more than happy to oblige.

Paul D. Brocks’ latest bestseller A comprehensive guide to Insects of Britain & Ireland (Pisces 2014) covers more than 2100 species and has been reprinted in 2015: www.naturebureau.co.uk/bookshop/a-comprehensive-guide-to-insects-of-britain-and-ireland-detail, or call 01635 550380