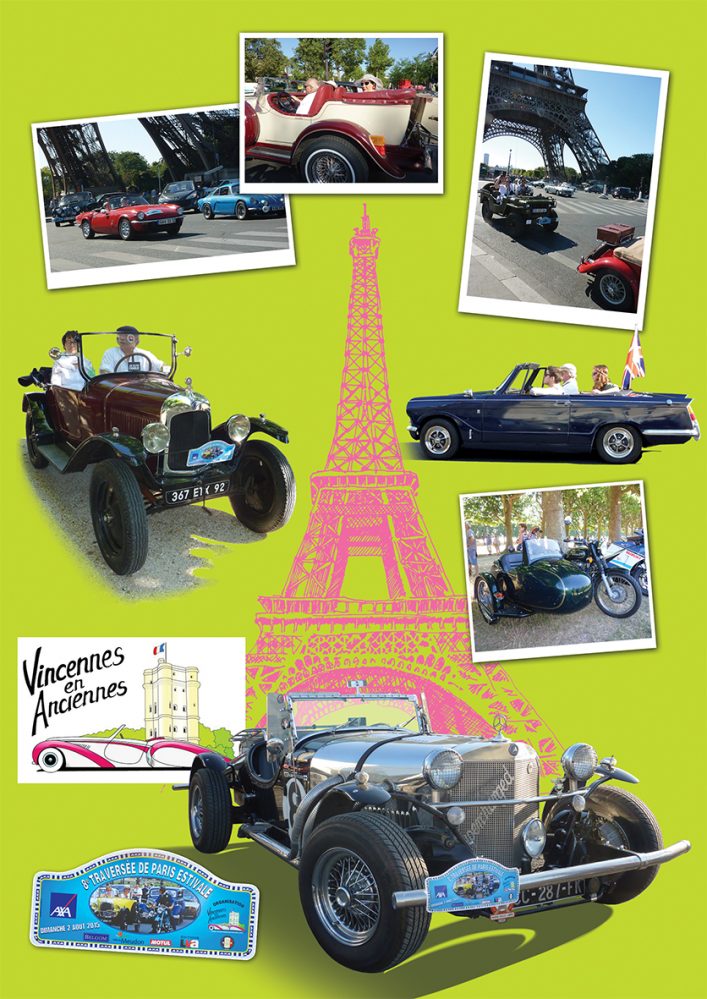 A chap in my metro carriage wears distinctly old khaki; unless the French army is having a funding crisis, it’s very likely he is heading, as I am, to La Traversée, a vintage vehicle rally crossing (hence the name) Paris on two Sundays in summer and January annually.

Leaving Château de Vincennes metro I walk past the epony-mous, enormous castle to the boulevard where, ultimately, 805 cars, 15 tractors, 47 motor-cycles, four buses and three bi-cycles will depart from between 8-9am for a 28Km ride from east to southwest Paris.

I turn a corner, and see a crowd of people dressed in white (an alternative dress code for those not in vintage) like something out of a Monet painting; one is even dressed as Toulouse-Lautrec.

PR Anne Quemy proffers my press pack, stapled to the front of which is a notice announcing the Préfecture de Police has told participants to not drive along the Champs-Élysées, in keeping with the country’s Vigipirate national security alert system.

Being amid this mass of mech-anisation is exhilarating, mildly euphoric, even, absorbing man’s development of the internal combustion engine down the decades. Vehicles must be at least 30 years old to participate, some are over a century old.

As I scribble and snap I am re-signed to no words or photos doing justice to this gathering, the early morning air strangely sweet with the exhaust, roar and rumble of diverse drives; all automobile life is here.

Anne has prudently arranged for me to travel with Laurence Heyries, an English teacher at La Sorbonne in a 1967 Peugeot 404 cabriolet owned by her friend, Herve Marthon, with dog Java along for the ride. Being open-topped means I can take photo-graphs in 360 degrees, some-thing made easier by the car’s lack of seatbelts. Although not breaking the law, it feels like it is. 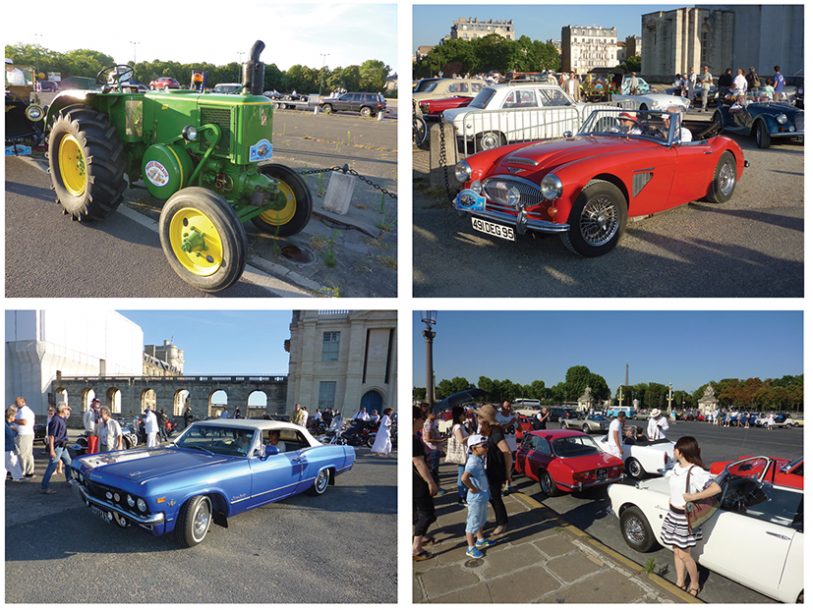 Most vehicles have departed before we set off at 8.50am, so we take a short cut to catch up with them. Laurence stresses this is not a race, indeed it soon be-comes apparent this is a jam-boree and nobody will want to be the first to leave the fun.

While official participants are given a number plate permit-ting them into Meudon Observatory, where the rally ends, it is soon clear Paris’ car lovers in general are free to join in. A snarl forms at one round-about, and as I look around we are surrounded by vintage cars and a bus trying forlornly to proceed along its route. We rule Paris’ roads today – they are our playground and this is the joyous last day of school when all the rules go out of the wind-ow. Drivers blow their horns in celebration as much as frustra-tion, with one providing a re-splendent rendition of La Marseillaise.

Before long I spot an open-top Triumph Herald flying a Union Flag, as we draw alongside I shout out, ‘Rule Britannia!’ and its occupants cheer back.

Seconds later, we stop beside a red Ford Mustang, sporting a Stars and Stripes whose pass-engers wear Stetsons; they may or may not be bona fide Ameri-cans in Paris.

We draw alongside an AC Cobra, throbbing like a lion after a particularly satisfying meal; its driver and his lady smile naturally for the camera.

At Place de la Concorde, where cars are already parked two-deep around its central island, hordes of tourists greet new arrivals. The urge to photo-graph the most eye-catching ones compels many to step boldly out into the road.

At this stage Laurence and I swap cars for her husband’s 1958 Simca Chambord.

After the short drive to Les Invalides we stop again. I over-hear one man talking to his wife while showing her another Triumph Herald; although my French is not brilliant it’s clear he is explaining this was his first car.

A lad of around eight years old is drawn to our Simca, although his fascination may be due to its similarity to the Ford Anglia from Harry Potter and the Chamber of Secrets.

There is talk of heading to Père Lachaise Cemetery, but, thankfully, my suggestion of going to the Eiffel Tower wins the day. There, it’s my turn to stand in the road and I’m grateful for my trusty Panasonic Lumix’s hi-speed burst function and the morning’s brilliant sunshine when attempting to capture this extraordinary spectacle. La Traversée’s winter running may not offer such conducive conditions.

With (hopefully) the images needed for TheBAY’s pages, we ascend to Meudon Observatory (somewhat incongruously via satnav) where crowds sit in deckchairs to welcome us, as though on the Tour De France’s Alpe d’Huez stage. We even receive a round of applause. The rally’s pace is slow here, and we wave like minor royalty.

Suffice to say the preceding four hours have been a blast; it must be fun to watch La Traversée from the pavement, and a buzz to be a passenger on one of its vintage buses but it’s utterly amazing to be at the heart of its senses-dazzling blur.

Alas, the time has come for me to be taken to Meudon from where I will catch the RER train back into central Paris. Road-works prevent my being drop-ped at the station, so I walk for 90 seconds through its streets, and am immediately struck by the mediocrity and mundane-ness of the cars and mechanical diggers I pass.

I feel like children’s character Mr Benn finding himself back in Festive Road’s humdrumness, and wonder whether my fan-tastic excursion through the French capital has all been a dream. Reaching into my ruck-sack, I find my press pack and the number plate within issued to official participants, and will treasure it as a souvenir of my sublime Parisian spin.