Tales from the riverbank

Our motoring correspondent, Liam Bird discovered this riverside restaurant last year on a return journey from Swansea to his home in the Welsh Marches, so it was the ideal meeting point when he wanted to show off his car of the month the Alfa Romeo 4C (see our motoring pages).

The route to Glasbury is via the Brecon Beacons, which on rare sunny Sunday lunchtime was a bit like the Isle of Man on TT practice week. We arrived just after a Harley Davidson chapter, to find that parking spaces were scarce – until a friendly chap from the adjoining canoe hire shop offered up his space to us. This was to set the tone for our afternoon – smiling faces all round.

The River Café sits right on the banks of the river Wye, in the shadow of the Glasbury Bridge. It’s part café, bar and restaurant but with an adjoining bunk-house and canoe, kayak, mountain bike and Vespa hire!

It’s not just the number of strings to its bow that makes Wye Valley Canoes – the official title of the centre – stand out, but the eclectic mix of dishes on offer in the Italian influenced café. The menu comprises of Light Bites and Mains – we tried a few from the former as our start-ers. Hot smoked salmon bruschetta and ham with Montego cheese croquettes were wolfed down but the stand out dish for me was the Israeli couscous with sumac and chicken and courgette meatballs. Israeli couscous is in fact ptitim, a type of toasted pasta formed into tiny balls. Sumac is a middle-eastern spice made from the dried red berries of the bush of the same name – it has a tangy lemony flavour and is one of the main ingredients of za’atar, a spice commonly found in Lebanese cuisine.

With so many of the café’s clientele participating in water sports, cycling and walking you’d be right in thinking that the portion sizes are healthy – but that’s not to say that they are served in huge portions. As someone who is completely fazed when presented with a plate laden with food I was able to completely finish my crab pappardelle – not surprising really as pappare means to ‘gobble up’! Freshly cooked crab meat in just enough mildly tomatoey creamy sauce to coat the fresh pasta showed that there were skilled staff in the kitchen. The home made burger and pork parmigiana plates were cleared and declared superb.

As the afternoon had warmed up, we moved onto the riverside terrace for coffee and surprisingly for me, desserts. Lemon Posset has a special place in my heart as it was one of the very first puddings that we gave the recipe for in TheBAY. It’s such a simple dish to prepare as it uses just three ingredients, cream, sugar and lemon juice – but the secret is getting the balance just right. The River Café has got it spot on. Creamy, lemony and in just the right proportions – the topping of summer berries was simply the icing on the cake.

I don’t know whether it was the fact that the sun was shining and everyone was in good humour, but the staff at the café all had sunny dispositions and were attentive without being intrusive – a very happy balance.

Glasbury at just over an hours drive from Swansea is just four miles from the book lover’s mecca, the lovely market town of Hay-on-Wye.

Market day in Hay is Thursday, and there is the walking festival on from 7-11 October.

The Abergavenny Food Festival is 19 – 20 September and is just 25 miles away.

The old Ice House in Swansea has undergone another change of ownership in recent months and it is now known as the River House. It still has its large bar area where you can get a light lunch or simply drop in for a coffee, but it’s in the restaurant area at the back that the changes are most obvious. The first thing you notice is that unlike so many places, they haven’t crammed as many tables and chairs in as possible to maximise their covers. Secondly the menu is large enough to provide plenty of choice but small enough to know that everything on it is going to have been freshly prepared.

I dithered between heritage tomatoes with mozzarella and pesto and a ham hock terrine but the latter won the day. Tender salty morsels of ham in a little aspic with sunshine yellow piccalilli accompanied by shards of crispy melba toast were just the thing to accompany a chilled glass of Sauvignon Blanc.

It’s a joy to find fresh fish on a menu in Swansea. I can never understand why there is so little variety when we have so many to choose from – and don’t get me started on the ubiquitous fillet of salmon!

Hurrah for hake. Now on the sustainable list of fish, we can eat hake without a conscience. Here it was served on a dish of white beans and mussels and its white flesh was utterly buttery. I all but licked the plate. There were plenty of meaty offerings too; slow roasted belly pork, sirloin steak and lamb as well as another of my favourite fish, sea bass with very pretty saffron potatoes.

If you haven’t ventured down to the waterfront for a while I highly recommend you remedy that pronto. The River House has a very good value lunch at £13.95 which features both hake and ham hock terrine.

For me, eating out isn’t always just about the food – it’s also very much about the service and a special mention must go to our delightful waitress that evening. She had us in stitches when we got into conservation about the food inspired art hanging on the walls, and even though we were the last to leave she didn’t hurry us up. 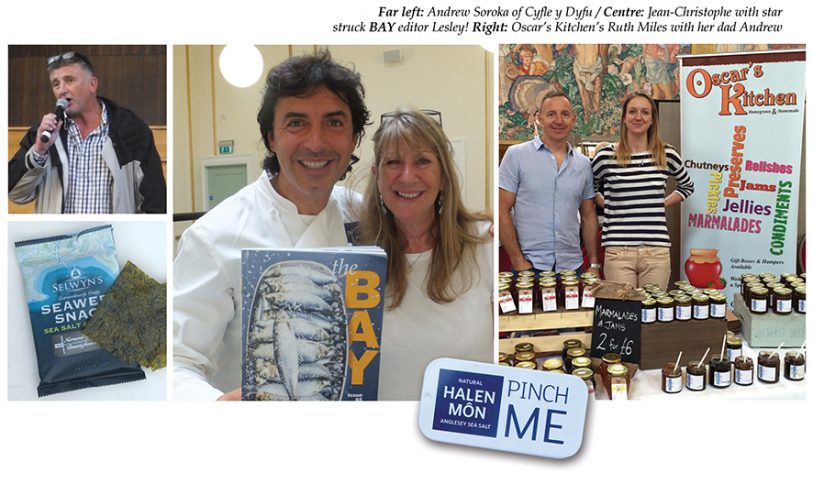 Just when I thought it was never going to stop raining, the sun came out and I took the opportunity to make a run for it and scampered into the Brangwyn Hall where hundreds of other food lovers were gathering. Jean Christophe Novelli was on the stage, demonstrating how to make a devastatingly beautiful fruity dessert topped with a spun sugar cage, ably assisted by Andrew Soroka of Cyfle y Dyfu. Andrew runs his social enterprise business of manufacturing wooden furniture and employing ex-drug addicts until they are able to enter mainstream employment. Today Andrew was promoting and selling wooden chopping boards, one of which was now being used by Monsieur Novelli to present his posh pud.

My aim was to find new products to add to my bulging store cupboards, and I wasn’t disappointed. New to the market are Selwyn’s Seaweed Snacks; to describe these as wafer-thin sheets of flavoured seaweed doesn’t do them justice at all. The range comprises of Sea Salt and Vinegar, Coconut and Chilli, Honey and Sesame. I was drawn to the Salt and Vinegar flavour as it is one of my favourites for crisps, and I was delighted to discover that a whole pack only contains 11 calories. I love the tag line on the packet ‘Big on Taste, Small on Waist’! As well as tucking in to them straight from the bag, I have an idea that they could give a very cheffy finish to a fish dish if cut into shards. Available from CK Supermarkets or www.selwynsseaweed.com

Another ‘find’ was something I never knew that I needed until I saw it – a handbag-sized salt cellar! How cute is this little Halen Mon sea salt tin? Available from www.halenmon.com it’s the perfect stocking filler for a food lover.

Oscar’s Kitchen is the jam and chutney manufacturing name of Ruth Miles’ business that she runs from her home in Hendy. If you thought that jam making was the reserve of grandma’s then think again – Ruth is a very smart young woman with a passion for preserves. I was very taken with the little pots of jam and marmalade in amphora shaped glass jars, they’d look very pretty on the breakfast table. Ruth attends many of the food fairs and markets locally or you can contact her via her Facebook or Twitter page.

My visit to the food festival was topped off with a chat with Jean-Christophe the 5 out of 5 AA Rosette and Michelin Award winning French chef. What a charming guy he was, spending over an hour laughing and joking about his childhood and love of football. As a child he was hyper active “my teacher would tie me to the chair” he told me “it was the only way she could make me sit still”. “My mother would give me a lump of sugar every morning before I left for school – this might have accounted for my behaviour!” He left school at the age of 14 to work in a bakery in his home town of Arras in Northern France, and later at the age of 19 became a private chef to Elie de Rothschild. In the early 80s he worked for Keith Floyd in his pub while he was away filming his television shows. In 1996 Jean-Christophe opened four restaurants of his own in London and today runs his Academy from his home in Hertfordshire.

I hope this festival was as successful as it was enjoyable – I look forward to next years.

The worldwide web never ceases to amaze me. In the 15 years since I first encountered the internet I have learnt so many things that would have otherwise have passed me by. I found the following so amazing I felt I had to share it with you.

The residual liquid from a drained tin of chickpeas, known as aquafaba or bean water, can be whisked up until light and fluffy and then used as a substitute for egg whites.

Yes, that’s right, the stuff I have been chucking down the sink after making hummus could have been used to make meringues, mousses and ice-cream – all vegan and egg intolerant friendly. www.vegansociety.com has lots of recipes. www.mouthwateringvegan.com has come up with a recipe for a pot au chocolat type mousse that uses just 100g of chocolate, a couple of teaspoons of icing sugar, a pinch of salt and 125ml of aquafaba.

If you’ve tried this out, do let me know how successful it was and maybe you can send in your recipes!