What’s it all about – Alfa?

“Do you fancy meeting up for lunch” asked Liam “I have an Alfa Romeo I want to put through its paces, and we’ve found a nice little café by the river”. What better way to spend a Sunday I thought, so we met up with Liam and his lovely wife Becky at Glasbury on the river Wye. After a jolly fine lunch – see my culinary causerie pages – my afternoon was rounded off with a breath-taking spin in this fabulous little sports car –

I now understand why Liam enjoys his work so much!

Good things come to those who wait, or so the saying goes. Patience is a virtue. It’s taken just over two years but at last Alfa Romeo have handed me the keys to a 4C, their pretty little carbon fibre tubbed, mid-engined coupe that’s had me captivated ever since I first clapped eyes on one. The emails, the phone calls, I admit a fair bit of nagging and perhaps even a few prayers – finally they’ve been answered. 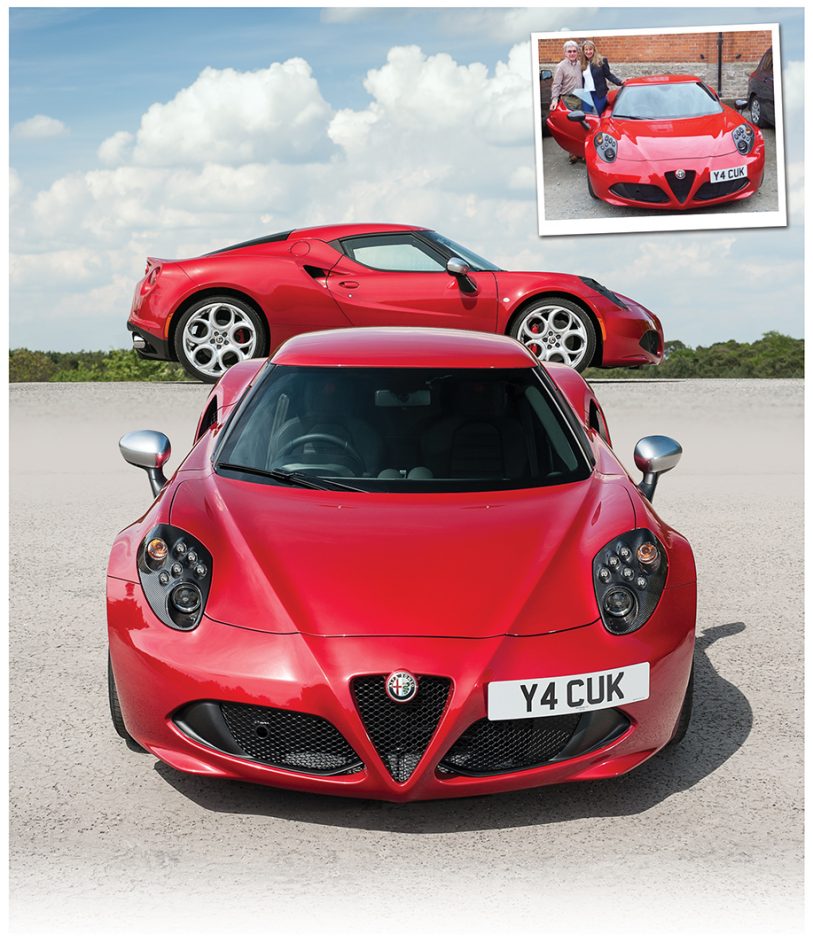 So, why all the fuss?

Well for starters I’m not the only one who’s been waiting for the return of a “proper” Alfa Romeo. The very mention of the name should have you thinking of Ascari, Nuvolari, Mezzario and Fangio. Alfa Romeos have been styled by the greats: Zagato, Bertone, Giugiaro, and Scaglietti. They’ve won the Targa Florio – considered by many to be the greatest of all road races – more times than any other manufacturer. And, not that long ago, a man called Enzo Ferrari managed their Formula One team (rumour has it he moved to Maranello to dabble in car manufacturing soon after). Alfa Romeos are ingrained in the history of the automobile; their back catalogue reads like an automotive Who’s Who. Think 8C, Spider, Giulietta, Tipo33 Stradale, Disco Volante. Remove the more recent warmed-over front wheel-drive Fiat fodder that lost the Alfa Romeo badge its lustre from your mind.

On first sightings the little 4C (it’s just four metres long) conjures up images of the greats. Its styling is instantly Italian, instantly Alfa; the semi-circular windscreen base, the curvature of the side windows, the air scoops, the round rear lights, they’re all there. It could easily pass for a Ferrari, and there’s more than a hint of Lancia Stratos in it too. Maybe it’s the press demonstrator’s Rosso Competizione paint job. Maybe I’m getting a little carried away.

Getting into the 4C soon brings you back down to earth – with a bump. Quite whether you slide in over its high set sill or fall I’m still not quite sure, either way ingress is not elegant. Neither, once you’re aboard, is the 4C’s cabin. Hard, brittle feeling, and even sharp in some places, plastics cover the dashboard and doors. The seats are thinly padded, don’t recline enough and push your shoulders forward – the passenger seat is fixed unless you specify runners. There’s exposed metal, screw heads, and carbon fibre everywhere, the door pulls are simple strips of leather and the cheap feeling clicky-clacky switch-gear simply has no place in something with a near-as-dammit £50k (before options) price-tag. The brief must have read functional and durable, comfortable and luxurious didn’t get a look-in.

The driving position, once you’re in however, is excellent. The view forwards is classic sports-racer, your elbows sit lower than the tops of the 4C’s front wheel arches and the thick-rimmed steering wheel, electronic dials, and aluminium pedals (there are only two, all 4Cs are automatics) sit dead ahead. Rear visibility on the other hand is nigh-on useless.

It’s loud inside a 4C too, very loud in fact. The engine sits right behind you and because the 4C has been built so light – two-up with fluids it weighs barely a tonne and even the glass is thinner than normal – there’s little in the way of sound insulation. Above 15mph the radio, itself a delete option, is all but inaudible. Every throttle input is accompanied by a bark from the exhaust and swoosh from the turbo, every brake input comes with a whistle from the wastegate and a chatter of the valve-gear. Half an hour into a three hour journey, I checked to see if I’d left a window open, another half an hour in and I resorted to ear-plugs.

What comes as a surprise though, bigger even than the 4C’s performance (0-60: 4.5 seconds), is just how com-pliant the ride is; firm yes, but even on what passes for tarmac out here in the sticks, never uncompromising. The steering too is sublime, there’s no power assistance and thus none of the numbing effects that go with it. At parking speeds it is surprisingly heavy but once you’re on the move it tells you absolutely everything. Grip levels are also astonishing. The way the 4C feels, the way it drives, and best of all the way it makes you feel when you drive it, are by far its best features.

Well, that and the attention you’ll get every time you stop somewhere.

Even now, 2 years after production first started, sightings of 4Cs are still rare, and that I’ll admit is in no short way part of its appeal. On the right road it’s a hoot, on the wrong one it can prove infuriating. Hugely impractical – the boot is tiny for starters and there’s nowhere to store your sunglasses – it’s both fast and fragile, flimsy yet fabulous. It’s beautiful, but deep down you know it’ll probably break your heart. Despite all that though, for me at least, it was worth the wait.

The 4C is everything a proper Alfa Romeo should be.