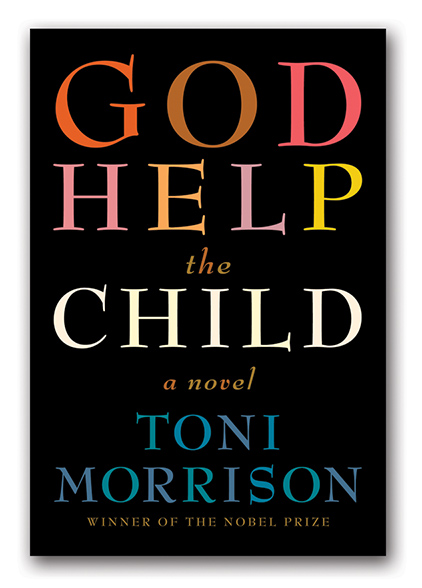 I have before me God Help the Child, Toni Morrison’s new novel. The African-American writer and Nobel laureate holds an iconic position in the USA as the voice of the black American woman.

Her novels are not just a matter of a perspective on an ethnic minority. While her characters are black, her thesis is universal. Poverty, not colour is the great leveller.

In God Help the Child, the protagonist Bride is detested by her indigent light skinned mother because a pure blue-black gene has emerged, making it impossible for the child to merge into the community or to pass for white as her parents can.

Sweetness, Bride’s mother feels less conspicuous thanks to her lighter skin colour, less of a visible target for racial abuse. Sweetness has not grasped that it is poverty that makes her life miserable—and that poverty stricken white people suffer the same humiliations and privations as her black community. But Bride grows into a blue black beauty, a successful career girl and business woman. While her blackness remains, her life changes because she has a very well-paid executive job with a high income from her innovative products—and all the flash accoutrements of success.

This then is Toni Morrison’s thesis, one that is the underlying metamessage of all her work. The abject horrors and dangers of slum life disappear when a kindly fate delivers affluence and a purpose in life.

Bride now transcends the thema. Her prosperity is no longer enough. She seeks a meaning to her relationship with her boyfriend Booker, another child of poverty who overcomes the brutality of his childhood in a poor black neighbourhood by the acquisition of knowledge .He is lifted out of his hate-filled environment by a college education and wide reading.

Toni Morrison explores a further truth— physical beauty, financial success, knowledge and learning are still not enough to provide escape routes from the all too visible stigma of blackness. Booker too, seeks more out of his life. Can he be as all other men of whatever race or background? Does his blackness control his future?

I would strongly recommend, that you as a citizen of the world’s most liberal and fair society, read this book and arrive at your own conclusions. Like all great works of literature, Morrison’s novel presents a wide capacity for interpretation. I can by no means say the last word in an appreciation of God Help the Child.

The 2015 Booker Prize longlist features three British writers, five US writers and one apiece from the Republic of Ireland, New Zealand, India, Nigeria and Jamaica, an excellent spread of international writing. There are three debut novelists on the list: Bill Clegg (USA), Chigozie Obioma (Nigeria) and Anna Smaill (New Zealand).

I have reviewed the best of the submissions, Tom McCarthy’s Satin Island in full. It is so outstanding a novel that it is unlikely to win, following the Booker judges’ tendency to plump for mediocrity. There are plenty of suitably lacklustre titles on the longlist, linear novels of minimal literary value, saying very little that is new on a variety of hackneyed themes.

Fortunately the judges this year have kept well away from the horrible historical novel, doubtless seeking to repair the damage done to the Booker Prize’s credibility by earlier aberrations. The then chairman of the judges has never repeated his ill-judged statement that he was looking for a winner you could take to read on the beach, a mindless and supremely patronising statement that has insulted the intelligence of all who love good writing and all those writers who bring literary excellence to the world.

This year, the publishers got their acts together and literary editors received most of the books in time—-unlike the shambles of last year when half the nominees were not even published at selection time. From the 11 titles received, I have selected my own shortlist of four novels.

True to form, British novelist Tom McCarthy has created in his new book Satin Island, a work as complex as his Booker short-listed novel ‘C’.  McCarthy is obsessive about the potential of pure information as an answer to sociological and philosophical conundrums.

It is impossible to do justice to a novel as multi-layered as Satin Island without quoting large swathes of the text. Basically McCarthy’s writing is so dense and so interwoven with the macrocosm of contemporary existence and the microcosm of individual lives that it presents too wide a scope for a review to represent. I would have to write a book about the book to bring it to the reader in the full force of its veracity

In Satin Island, the protagonist U. is an anthropologist, a collector of detailed data about tribal behaviour in remote areas of the world.

Bowing, with a certain irony, to the scarcity of unexplored lands and peoples, U. achieves success as an ethnographer studying human behaviour in the modern urban world. The novel itself is laid out in numbered paragraphs like any consultancy report or civil servant brief.

U. reacts obsessively to every incident he encounters, every news report: A frightful oil spill, the suspicious death of a skydiver, the terminal cancer that attacks his friend Petr, the horrors of municipal waste-disposal—it is all grist to U.’s ethnographic mill.

U.’s writings and skills win him a place in a large and prestigious multi-specialsm consul-tancy where he is encouraged to develop his thema of Present Tense Anthropology. His omniscient and remote boss Peynman charges U. with writing the ultimate Great Report that would worm its way ‘into each corner of the citizenry’s lives re-setting (“reconfiguring”) the systems lying behind and bearing on virtually their every action and experience…’

As a commentary on ‘the networks of exchange’ created by the incessant information – gathering and the multiple intrusions of the digital age, Tom McCarthy deploys a volatile range of narrative tools using all of U.s senses, all his cognitive powers and all of his analytical abi-lity to try and interpret the data he collects from the world around him.

Satin Island is the only submission from the thirteen books in the ‘Booker dozen’ featuring on the 2015 longlist to be worthy of winning a major literary prize. Fittingly, it was the head of Jonathan Cape Publishing, Tom Maschler who founded the Booker Prize.

The Year of the Runaways

Among the thirteen Booker longlist contenders, British/Indian novelist Sunjeev Sahota deserves attention for his submission The Year of the Runaways. Sahota has featured in this column before as one of the literary magazine Granta’s best young British novelists of 2013.

The Year of the Runaways is remarkable for its topicality and its careful investigation of the motives, the trials and the tribulations of the illegal immigrant. All the issues in the news today, the migrant traffickers, the hapless migrants and their pathetic lives, always on the run as ‘illegals’, are brought to vivid life as Sahota tells the story of a group of Indians in a slum in Sheffield, all hoping that their dream of ‘making it’ will come true.

We encounter immigration officers investigating the visa-wife of one of our group, we follow their flight after an immigration raid—you could be watching the daily news on TV as you follow Sahota’s revealing narrative.

His characters are drawn from the Sikh community, denizens of the Punjab in North India, none of whom are in need of political asylum. They come in the hope of a better life, of greater opportunity to build a future, as so many of their compatriots have already done.

Sahota tells his story simply, with strength and conviction — certainly a vigorous contender for the 2015 Booker Prize.

The Chimes arrived on my desk, tied up in lovely old-fashioned twine from which hung a paper label with the message ‘Meet 2015’s most impressive new novelist’ and on the obverse ‘Longlisted for the Man Booker Prize 2015’.

Apart from being a most attractive bookmark, the label told the truth. New Zealander Anna Smaill has written an exceptional fantasy, rather on the lines of Kazuo Ishiguro’s The Buried Giant. Both novels deal with a post acopalyptic Britain in an undated period; both deal with the loss of communal and personal memories as a central dilemma —- and with the secrets of family and community as they unravel.

Smaill tells her story through the idiom of music, a strange and euphonious style, heavy with symphonic metaphor, in keeping with the eponymous power of the ‘Chimes’, the controller of life and death.

Danger dogs Smaill’s protagonist Simon as he follows his dead mother’s wishes and arrives in London to meet her fellow conspirator. He joins the Thames-side Five Rover Pact and meets others in the same situation, all struggling to retain their memories, fighting for their return.

All becomes clear as the narrative unfolds to its own melodic denouement. The Chimes is certainly a very unusual work, an exceptional debut novel for a young Commonwealth writer and has earned a place on the 2015 shortlist.

What is philosophy to an abandoned child? What is religion when food is scarce and rags are your only covering? What price pride and self-respect when that is all you have against a hostile world?

Pulitzer prize winning American novelist Marilynne Robinson in her brilliant Booker offering Lila attempts to reconcile these disparate truisms with the haunting narrative of her young protagonist Lila, tracing her life and her development from being the protegee of her rescuer Doll, through to a life as an itinerant labourer, living below the poverty line with a group of other drifters, fleeing violence and bloodshed, doing her term in a whorehouse and ending up proposing marriage to a silvery haired Reverend in Gilead, a small town in Iowa.

Lila is an outstanding novel harnessing the simple narrative form to portray our protagonist achieving an understanding of life that is beautiful without precedent.

Robinson’s holistic approach to equating hardship and emotional deprivation with the promises of the church and the vicious reality of life in poverty is plausible and in fact as real as the conundrum that Lila solves in her metaphorical journey.

A highly commendable work of literature.