PIXAR RETURNS TO FORM WITH THIS EXPLO-RATION OF THE INNER WORKINGS OF OUR MINDS. 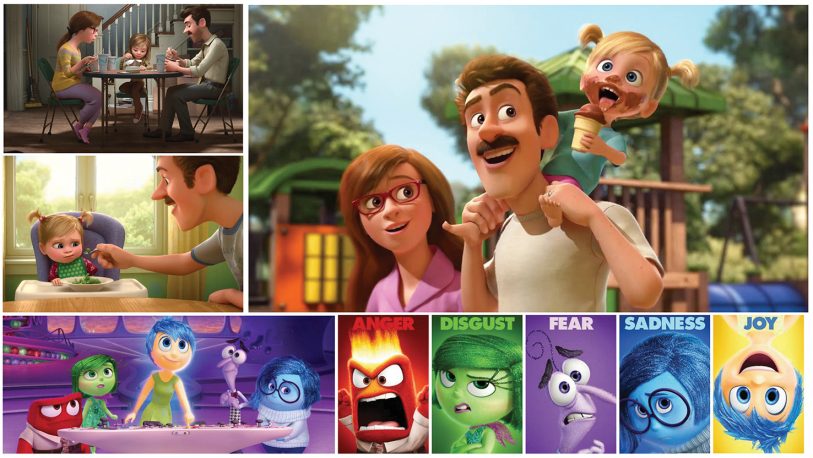 Lurking in the minds of every human lie five fundamental emotions, according to Pixar that is: Joy, Sadness, Anger, Fear, and Disgust. These emotional states, loosely based on Paul Ekman’s theory of six key human feelings (except that Surprise

and Fear are merged into one figure in this film), analyse and govern our responses to every situation we face. In the film Riley Andersen (Kaitlyn Dias), your average 11 year-old girl, has these emotions working in perfect har-mony until disaster strikes: Riley’s father, upon getting a new job, moves the family from their idyllic home in Minnesota to San Francisco. Struggling to deal with the change of environment and leaving her close friends be-hind, Riley’s psyche falls into complete meltdown. It is therefore the job of Joy (Amy Poehler), the emotion in charge of Headquarters – Riley’s conscious mind that represents the part of the limbic system that deals with emotions – and her colleagues to maintain Riley’s mental wellbeing.

Brilliantly imaginative and insightful, Inside Out is a perceptive exploration of the human psyche under turmoil. The analogies used in the film to convey the different areas of the brain may be seen by neurologists as being oversimplified, however Inside Out manages to blend captivating moments with pure entertainment for both younger and older audiences. For example, once Riley moves to San Francisco her personality begins to disintegrate, the imaginative and playful aspect of her mind starts to shut down, and she ends up hating things she previously loved, such as her penchant for hockey. This is illustrated through Sadness (Phyllis Smith) and her confusion and weariness to both Riley’s increasingly deteriorating situation and her own role in Headquarters. As a result, Sadness begins to overtake the work of Joy by influencing the core memories that are stored in coloured orbs, much to the annoyance of Joy.

At first, audiences may also be confused as to what the role of Sadness is. However as the film progresses we realise, with Joy, that there are limitations to our memories and emotions: a constant happy state is not a healthy way of resolving one’s negative experiences or feelings. When Joy and Sadness become lost in the complexity of Riley’s long-term memories, the two emotions come across Bing Bong, Riley’s childhood imaginary friend. Bing Bong is desperate for Riley to reconnect with him, and the thought of being lost in the

‘Memory Dump’ – a place where old memories are discarded – plagues him deeply. It is at this point that Sadness consoles Bing-Bong, which gives him a temporary sense of relief. As Joy watches this she soon discovers that, no matter how much pain or suffering sad emotions causes a person, all our emotions are vital not only for the creation of memories but also for playing an educative role; without negative emotions, humans would be incapable of evolving and maturing into adulthood.

One aspect of the film that is problematic is the fact that the protagonist only has five basic emotions, four of which are negative. Is Riley supposed to be an emotionally under-developed girl, incapable of feeling things like guilt, jealously, or shock? Or is Pixar trying to tell us that humans are just depressing creatures? Perhaps what would have worked better is a multi-tiered system located in the Headquarters, with the lower levels holding basic emotions and the higher levels containing more intelligent and complex thought processes.

What the film lacks in scientific accuracy, it gains in perfect casting. Amy Poehler is the ideal choice as the voice of Joy, as is Mindy Kaling as Disgust. However, Phyllis Smith as Sadness is simply captivating. Known for her relatively small role in the American version of The Office, Smith’s realistic performance outshines her fellow cast members and leaves you wanting a sequel centred just around her character.

Whilst most children will face difficulty in understanding the plot’s deeper meaning, the neurological and abstract parts of the film are sustained well with the peppering of typical, light-hearted Pixar moments that are reminiscent of their previous efforts such as the Monsters, Inc. and Toy Story franchises. For some, the narrative of moving home and familial struggles may be too saccharine, but the surprisingly reflective mood of the film makes Inside Out a worthy, albeit contrasting, addition to Pixar’s canon of animation films.

Time Out of Mind

New York, present day. An establishing shot of the city opens the film, complete with the roaring diegetic sound of overlapping conversations from within the bustling streets. The film’s title slowly emerges on the screen and is superimposed over the wide shot of the cityscape. The transparency of the title epitomises the life of the protagonist George Hammond (Richard Gere), a homeless, mentally ill man desperate for existence in his battle for shelter and to reconnect with his estranged daughter Maggie (Jena Malone).

In 2013 Gere, along with director Oren Moverman, began a social experiment that lasted several months and involved first hand research into homelessness in America, including staying in homeless shelters in New York and even going ‘undercover’ on the streets of the city begging for change. The end product is Time Out of Mind, a film that unashamedly stresses the homelessness issue facing America today. According to statistics by the National Alliance to End Homelessness, around 600,000 people in the United States experience homelessness on any given night. A large percentage of those people are also suffering from mental illness or addictions. However, as the film expresses, numbers are irrelevant and only cause the general public to become increasingly numb to the situation.

In the film’s opening scene, George is evicted from his squat and it is here we are given a clue about his mental state; as George talks to the building manager (Steve Buscemi) the camera focuses solely on George looking in the bathroom

mirror, making it appear as if he is speaking to himself. Subsequent scenes featuring empty hallways and chiaroscuro lighting work together to illustrate the hollowness of George’s life. The muffled conversations that come from the neighbouring apartments parallel his mental turmoil as Buscemi swiftly throws him out the apartment block.

The film visually and aurally draws the audience into the subjective world of George and refuses to rely heavily on dialogue. For the first fifty minutes, Moverman uses the muffled sound effects not only to simulate the mental state of George, but to also highlight how society has ignored the issue of homelessness to the point where it simply becomes another inaudible sound belonging to the city.

Moverman also includes a number of scenes where he deliberately obstructs our view of George through objects such as shop windows, blinds, or behind glass doors. This motif of glass and obstruction creates a high level of verisimilitude concerning the homelessness epidemic in the western world; as in real life, we are often confronted with homeless people, yet are too engrossed in our own lives and far removed from the situation to offer any type of help,

Leaving the lowest echelon of society suffering further from this neglect. This issue is highlighted further in the scene where George wakes up in the emergency room. A nurse informs him that he can sleep on the chairs for the night if he has no other place to go. Initially hospitable, the nurse suddenly becomes withdrawn and distracts herself with her phone when George begins to ask her for a place to stay.

The techniques used by the director serve to convey that the representation of homelessness, including George’s addiction to alcohol, should not be used purely as an educative function that distracts from the complex realities of being displaced. Instead, the depiction and effects of homelessness in the film become distinct to George and those in a similar situation he encounters. As a result, the film expresses how it is vital to work with those living on the streets on an individual basis, and not as another case number on the system.

Gere’s performance is perhaps his best to date. Initially, it is difficult to suspend your disbelief that this suave and sophisticated businessman from Pretty Woman is now homeless. However, as the film progresses, the filmic techniques and his increasingly desolate situation allow the audience to experience his frustrations from his perspective. It is also interesting to think about how many New Yorkers walked past Gere without giving him a second glance, as the film crew secretly filmed him beseeching the public for money.

Through intricate moments of George’s life on the streets of New York, Time Out of Mind throws the viewer into this alienating world in an attempt to emulate the feeling of being dispossessed. Although patience is required considering the slow pace and length of the film (120 minutes), the absence of flashbacks means the audience is stuck in George’s relentless present where he ceases to exist. No other scene illustrates this disheartening fact more than at the end of the film. As George roams the hostile streets, he ends up in Grand Central Station. Here, he stands in the middle of the station where a spot of sunlight hits him from the roof. Literally standing in the spotlight – a subtle hint to the public of his Hollywood status – George is completely ignored by those walking around him. Anonymous and with no sense of identity, George has lost everything that once characterised him to those around him but, more importantly, to himself.