This month CHARLES looks at the information that can be obtained from a death certificate. If you need help in tracing your family history, do get in touch with CHARLES, he’d be delighted to help

When I was researching my own family history I was interested to find that my ancestors who died during the 1660s had been buried in woollen shrouds. On further research I found out about the Burial in Woollen Acts 1666 – 80.  This Act required that the dead – except those who died of the plague, to be buried in pure English woollen shrouds. The legislation of this Act was in force until 1814. The Act was repealed in 1863. 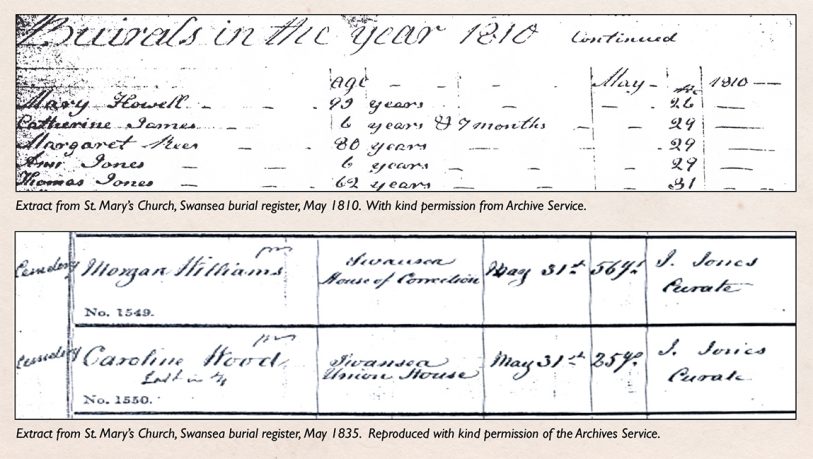 Unlike the Birth and Marriage Acts of 1836, it wasn’t until 1857 that the new Burial Act was enforced named the Burial Act, 1857. Its purpose was to officially regulate burial grounds. The Act made it illegal to disturb a grave, other than by exhumation sanctioned by the

Parish Registrars would have the details of burials, and before 1813 the records consisted of name, age and date of burial. From 1813 onwards the burials were recorded in registers, the information given would be name, abode, date of burial, age and who performed the ceremony.

The only major burial ground in Swansea at this time was at St. Mary’s Church, its grounds being quite modest and bounded by houses. It was during the 1960s that the graveyard was cleared, extended and lawned, creating a more pleasant area with some of the older gravestones being used as paving in a walkway around the church. Unfortunately the inscriptions on the gravestones are now being worn away and lost forever.

Pictured are two examples of burial registers of St Mary’s Church. The first example dating 1810, we can see that May 29th was a ‘busy’ day with 3 burials.

The second example dates from 1835. The two burials made on the 31st May stood out from the other burials as the address were more than just Swansea. The first address was the House of Correction. This building opened in 1826 and stood on land located to the south of the main wing of today’s prison. The second address was Swansea Union House. This building was the Bath-ing House, on Swansea Burrows on the Mumbles Road, which was converted for the use as a House of Industry and Infirmary. Today it is the site of the Civic Centre.

In the previous articles I have used people who have been born and married in Swansea, with this article I looked further afield

Edgar Evans, was one of the five men to have journeyed to the South Pole with Captain Scott during 1911/1912.  Evans was born 7th March 1876, in Middleton, Rhossili. Their aim to become the first to reach the Pole was unsuc-cessful as Roald Amundsen reached it a month earlier, in December 1911.  Scott’s return journey was fateful, and all the men died. Edgar Evans was the first to succumb during the trek, on 17th February 1912, at Ross Ice Shelf, Antarctica. His body was never found following the search party led by Apsley Cherry-Garrard, eight months later.

The first memorial dedicated to Petty Officer Edgar Evans was the plaque at St. Mary’s church, Rhossili, which his widow, Lois erected.

“To the Glory of God and in memory of Edgar Evans 1st Class Petty Officer, R.N. and a native of this Parish, who perished on the 17 February 1912, when returning from the South Pole with the Southern Party of the British Antarctic Expedition under the command of Captain Robert Falcon Scott, C.V.O., R.N. ‘To seek, to strive, to find, and not to yield”.

During 1964, the Royal Navy named the HMS Excellent, a new shore establishment at Portsmouth, The Edgar Evans Building.

For those who have ancestors who served with the navy, and died during their service either during peace time or war time, their death would have been recorded as a Return of Death. Using Edgar Evans as an example, this is what can be obtained from the Returns:

I purchased Edgar Evans’s Returns of Death from the General Register Office, Southport.

What information can be found on his Returns of Death? (see pic)

9. Cause of Death – Concussion of Brain. Without an actual body present the cause of death was recorded by Captain Scott in his journals. Also according to his journals, Evans had died at 12.30am and very quietly

Can anyone spot the two mistakes on the Returns? Also does anyone know how the photograph was taken at the South Pole?

More information on death certificates will be given in next month’s article, covering military records and medals.

Mrs Gaynor Mitchell sent me an email, firstly to say that she enjoyed reading my article. Also to ask me about a list of churches that can be found in and around Swansea? In answer to your question, before 1832 two churches were established in Swansea and after this date twenty more churches were established in and around Swansea. There will be a future article covering the subject of parish churches and their records.

I have received a further email from Tammy Tsonis who comes from America. She has been reading my first two articles with interest over there in America. She writes to me to ask me how she goes about obtaining documentation, like birth, marriage and death certificates from Puglia region of Italy.

Europe is unlike the United Kingdom, in keeping their documents. In the UK, there is the central government office, General Register Office and local councils. Italy on the other hand is divided up into regions. Regions, divided into provinces, provinces divided into communes/cities. When applying for a certificate, the information that is required would be your full name, date and location of birth, address, relationship to the relative, and relative’s full name and birthdate.

My email address swanseafamilyistory@yahoo.co.uk and if anyone would like to contact me, I would be delighted to help with any enquires.