When we received the press release and invitation to visit Wales’ latest water attraction, the WaveGarden in Snowdonia, we knew we had the right men for the job in Chris ‘Guts’ Griffiths and his son Connor. After a couple of false starts, we eventually got a date in the diary. TheBAY gives a big thank you to Chris, Connor and Paul Gill who drove to Snowdonia and back in a single day to bring us this review.

Surfing in Wales becomes global news. The world’s very first commercial artificial wave lagoon has officially opened in Wales. This is huge news in the surfing world! There have been swimming pools made with “wave machines” before but they have all been pretty awful on the whole, but this is supposed to be the real deal – a wave that is as close to a proper ocean wave as is possible to make. Now, that’s exciting! 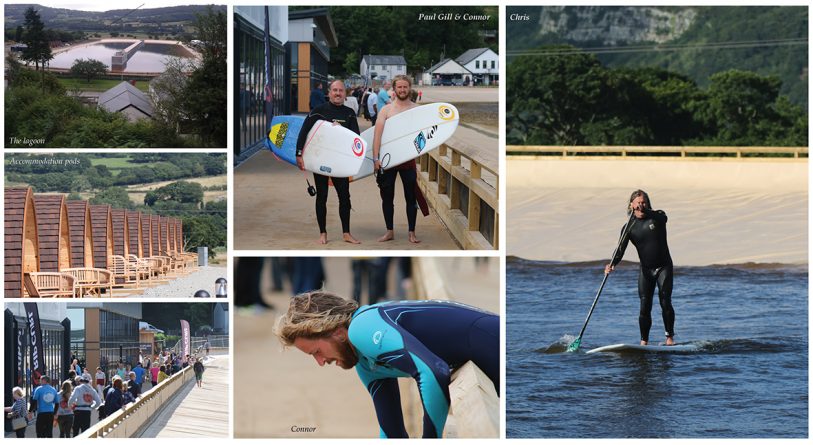 In a picturesque valley in the heart of Snowdonia they have built the world’s first WaveGarden open to the public. It’s been several years and over 10 million pounds in the making and it is hoped that it will provide a venue for thousands of surfers, from beginner to expert to be able to come and hone their skills in a safe and consistent location. It is also being considered by many as a perfect venue to host major surfing events due to quality waves being available at the flick of a switch (surf in the ocean is very unreliable at the best of times!).

It can produce up to a 2 metre high wave every 90 seconds which runs off down a manmade pool, about the size of 4 football pitches. This creates a ride-able surfing wave of around 150 metres.

Well, I’m writing this having just been to the WaveGarden for a session, so here goes with my take on the experience and whether it lives up to the hype or ended up just being a storm in the proverbial tea-cup.

After a 3.5 hour drive up north we arrived in a splendidly lush green valley that nestles in amongst the Snowdonia mountain range, and there sitting at one end is our destination – a manmade pool of water with a pontoon running through the middle. A split second after seeing the pool, our eyes are drawn to the perfect looking wave peeling down each side of that pontoon and excitement is hitting fever pitch instantly. This is a properly good-looking, head high wave with a couple of guys surfing their way along it! This is a great first impression and we hurriedly park up and head in to the main building which overlooks the pool, to report for duty. 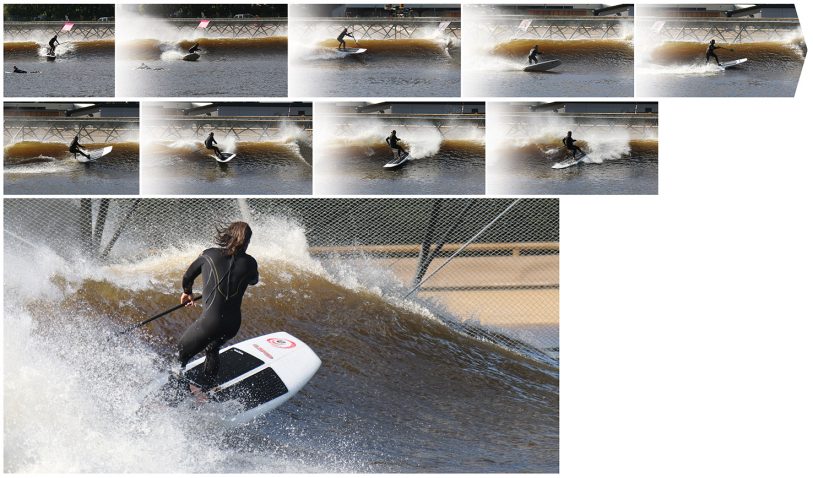 All the members of staff were super helpful and directed us to a surf building where we could leave our wetsuits and boards while we had a look around before our session started. Now this was a little weird – whenever you turn up at a surf break and see pumping waves you frantically get changed and dive straight in. However, our session was booked for 2pm and it was only mid-morning so we had to wait. This did give us time to go and have a good look at the wave and figure out exactly what was in store for us. There are actually three different wave areas created by each wave, the main wave is the one that hugs the central pontoon, this is for “advanced ” surfers. Then there is an off-shoot of this wave that is smaller and less challenging which breaks away from the main wave, this is for the “intermediate” people and then a third white-water only wave for beginners which stretches from the end of the pontoon to the end of the pool. With three different wave areas for varying abilities means that you can have several people riding at the same time, without interfering with each other.

We however were focused on the main “advanced” wave as this is what we were going to be riding. And to be fair, it looked really impressive. We watched several guys of varying skill levels riding it and they were having some great waves. Even though they are produced by a machine, not every wave is exactly the same; there are subtle differences which is a good thing.

As a spectator, you are close enough to the surfers to really get a great view of what’s going on which is pretty different to watching surfers in the ocean where the action usually takes place hundreds of yards away. This is a real bonus for watching friends and family.

Soon enough though, the waiting was over and it was our turn to get suited up and try out this new surfing experience. 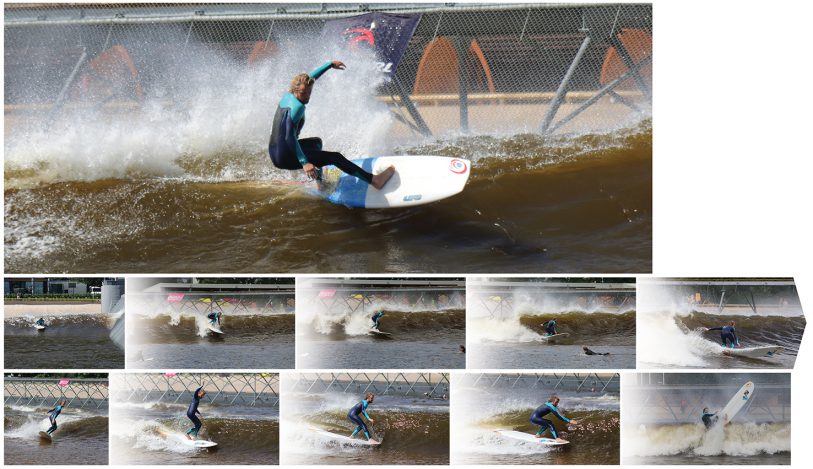 We were told to expect the water (which comes fresh off the surrounding mountains) to be a little chillier than we were used to in the sea, but we were pleasantly surprised to find it actually a bit warmer.

The wave is created by a type of snow plough contraption that is dragged along the bottom of the pool. This is housed underneath the central pontoon and starts at one end and runs to the other and then 90 seconds later it returns the other way. This means you get to surf left and right breaking waves in equal numbers throughout your session.

There are flags on the pontoon that indicate the correct place to be to catch the wave – too early and it won’t be steep enough to catch and too late and it will have already broken and envelope you in white water. Sounds pretty simple eh! Well, guess again as from the time you see the snow plough start its run, you have maybe a couple of seconds to paddle to the take-off point to meet the wave and it’s actually pretty tricky to get it right. In my session I mistimed my take-off on several occasions.

When I did get it right though, I found it to be a super fun wave, steep, fast and easily long enough to get three or four good turns in. It was a little odd at times though, because of how it’s created, it definitely has a different feel to a normal ocean wave and both Connor and I had a few unexpected wipe-outs trying to figure it out.

Our hour-long session went by in a blur of great rides, epic fails and a few missed opportunities and before we knew it we were getting ushered out to make way for the next customers.

Even though the WaveGarden is a fab-ulous engineering feat and undoubtedly the best man-made wave in the world, it can’t replace the ocean for the drama and beauty that the sea waves give you. However, as a surfing theme park, it ticks all the right boxes. And I for one will definitely be back to pay my money for another ticket to ride!!!

Many thanks to Surf Snowdonia press office. www.surfsnowdonia.co.uk