Earlier this summer , courtesy of Brittany Ferries, LIZ BARRY set off with her camera, for the douth of France, to explore the Canal du Midi

The Canal du Midi which flows through the centre of Carcassonne in Southern France was created under the supervision of Pierre-Paul Riquet, a wealthy, salt tax collector in Languedoc.

His wealth enabled him to undertake grand projects and between 1667 and 1694 in the reign of Louis XIV, he designed and built, to give its original name, the Canal Royal de Languedoc.

Today the 240km waterway which runs from the city of Toulouse down to the Mediterranean port of Sète, is an alternative way to discover the region.  Hire a houseboat, barge or cruiser and slow your pace to idle along the waterway to visit ancient villages, Roman fortifications and vineyards along the way. 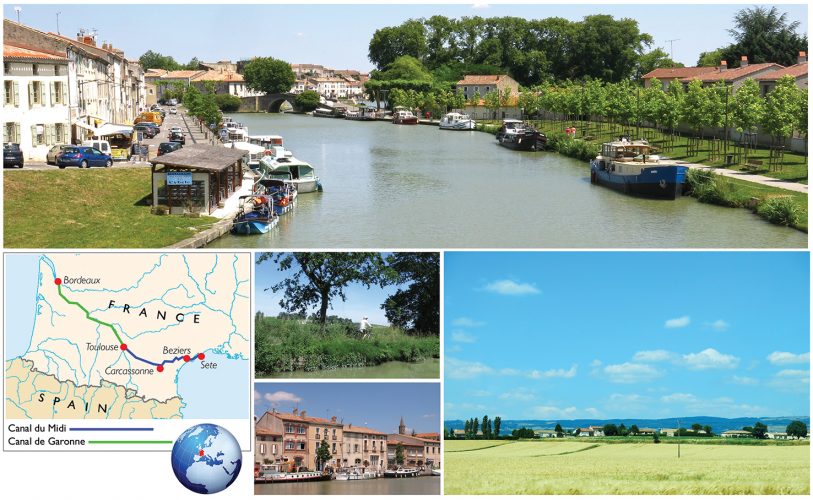 As I was only in the area for a couple of days I went on a 3 hour cruise, with a guide who provided a trilingual commentary in French, English and Spanish, which covered my 50 or so fellow passengers.

The landscape is beautiful, rural and unspoiled. As the canal twists and turns along its course, far off in the distance you can see the Black Mountains, where the water supply for the canal originates.

An overgrown tow path runs alongside the canal edge, serving the many walkers and cyclists. My photo-grapher’s eye is drawn to a patchwork of fields and distant villages that can be seen perched on the surrounding hillsides; a church steeple and a cluster of terracotta tiled rooftops, rows of young vine-leaves – the photo-opportunities are endless.

Originally the canal sides were planted with willow and irises, their intertwined root system served to stabilize the banks and prevent erosion. Later in the 18th century these were replaced by mulberry trees which were a food source for silkworms. During the Napoleonic Empire plane trees were planted but these will soon have to be replaced as they are now infected with a canker, they do however provide some welcome shade, especially when the boat stops to go through one of the many lock gates. These are now electronically- operated so passing through them is swift.

Spending time on the Canal du Midi was a great way to escape the hot afternoon, and see the surrounding countryside from a different perspective. With its stone bridges, grassy tow paths and avenues of plane trees it becomes a natural part of the scenery though it is all man-made. In 1996 it was classified as a Unesco World Heritage site as it is considered to be one of the greatest engineering achievements of the modern age and provided the technology that led directly to the industrial revolution and modern technological age.

Further information of the area www.tourism-midi-pyrenees.co.uk