The Mysteries of the Marco Polo Maps

by Prof Benjamin B Olshin

Travels in the Land of Serpents and Pearls 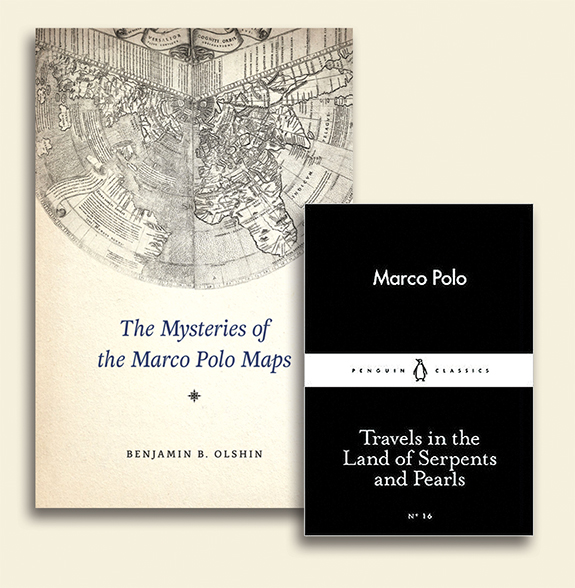 As a schoolgirl, I learnt, as all Indian children did, of the historic visitors to our sub-continental shores, namely Fa Hien (337-422 AD) and Hieun Tsang (602-664 AD), Buddhist monks, savants, writers and translators who made the pilgrimage overland through the Silk Route from China to the holy Indian sites marking the life of Gautama Buddha. Their copious body of written texts inform much of what we know today about the history of the times.

Marco Polo (1254-1324AD), the next well known traveller across the Silk Road through Central Asia and Mongolia did not write his own travelogue but dictated it to a fellow convict when he was a political prisoner in Italy. This omission naturally casts doubt on the veracity of his book The Travels of Marco Polo, and historians frequently need to use the earlier Buddhist texts as a means of corroborating his words.

A later overland traveller to India, the Moroccan Ibn Batuta (1304-1386AD) also dictated his travelogue and his work needs corroboration as well—not an ideal situation, I imagine, for the serious historian seeking an accurate picture of the times.

In this context, Prof Benjamin B. Olshin’s careful examination of the Rossi Collection of maps from the archives of Marco Polo’s daughters and other family members in his new book The Mysteries of the Marco Polo Maps brings to us, the ordinary readers, a fresh insight into the world of Polo and his travels. The book contains fascinating plates and illustrations of contemporary maps with Olshin’s detailed scholarly commentary on each map. You cannot fail to be delighted by the wider understanding this book offers on the life of a limitlessly fascinating merchant explorer, agent of the great Kublai Khan and the only European to have travelled so extensively overland and by sea to the furthest reaches of the then known world.

Equally interesting is the little book from the new Penguin Classics 80th Anniversary series, Travels in the Land of Serpents and Pearls by Marco Polo, a complete rendition of his sojourn in the sub-continent, a riveting and revealing record of his adventures in South India. With this little volume, Penguin has kept its promise that this new series would include little-known titles by famous writers.

Again, corroboration of his narrative is possible from the earlier Buddhist travelogues. Additionally, Prof Olshin’s Mysteries of the Marco Polo Maps include beautiful maps of India, Central Asia and neighbouring lands from the documents of his daughters Fantina and Moreta Polo.

It is wonderful to have new light thrown upon the histories of a merchant traveller whose writings profoundly influenced the western world, particularly when according to Italian savant Italo Calvino in his book Invisible Cities (1974):  “Kublai Khan does not necessarily believe everything Marco Polo says when he describes the cities visited on his expeditions, but the emperor of the Tartars does continue listening to the young Venetian with greater attention and curiosity than he shows any other messenger or explorer of his.”

No change then. An ambivalent attitude to Marco Polo’s reports continues unchanged over the last 700 years, give or take a few decades—while he still succeeds in exerting his narrative spell.

FOLLOWING ARE THE SIX SHORTLISTED AUTHORS FOR THE 2015 BOOKER PRIZE

We have already reviewed the first two titles in this column last month; here is a quick look at the other official contenders:

2. The Year of the Runaways

3. A Brief History of Seven Killings

If you thought as I did that Jamaica was about  breathtaking beaches, sensuous sands and opulent hotels, Marlon James fills us in with the realities of this paradisical backdrop. James takes us behind the scenes for an epic view of gang wars ,political tensions and mindless violence as a way of life.

A Brief History of Seven Killings is a roman a clef based on the life of the legendary reggae star and singer Bob Marley and the dreadful day when seven  gunmen sought to murder him. The raw and shocking narrative of wanton violence against women and children in the Jamaican towns and villages portrayed as a way of life, finds expression in this fictional “oral biography told by ghosts, witnesses, killers, members of parliament, conmen, beauty queens, FBI and CIA agents, reporters, journalists and even Keith Richards’ drug dealer”

A novel set in Jamaica is a novelty indeed — and A Brief History of Seven Killings is a brilliantly colourful and detailed epic, able to hold its own with the best of modern writing.

Illness, mental and physical has been the topic of many a successful novel, offering firstly, scope for an examination of the medical  condition (in this genre we have seen very well-written  novels about dementia, cancer, schizophrenia), secondly an analysis of the state of mind of the protagonist/sufferer as the disease progresses and, thirdly, the pain and anguish that family and friends undergo as they deal with the progressive onslaught of the disease, mental and physical.

In A Little Life, American writer Hanya Yanagihara tells the story of four graduates from a small town college who move to New York to embark on their working lives; handsome Willem, JB the painter, Malcolm the architect, and the central figure, Jude who has survived cruel sexual and physical abuse as a child.

Despite the horrors of his traumatic childhood, the violence of which has left  him crippled and maimed, Jude becomes a very successful lawyer, but his damaged soul finds a frightening peace in self-harm. His broken body is physically unable to cope with his self-inflicted violence — his friends watch over him, trying to minimize his suicidal attacks on his own body….

This is a harrowing book but beautiful in the determination by all his friends to heal Jude, demonstrating the therapeutic effects of brotherly love, in this ‘dark examination of the tyranny of memory and the limits of human endurance.’

Should A Little Life win the 2015 Booker Prize, I would be satisfied that some criteria of literary excellence have been met.

Anne Tyler is one of the finest writers in English today. Her style is impeccable, her narrative fresh and insightful and she has a rightful place in any celebration of excellence in contemporary literature. A Spool of Blue Thread is a traditional family saga, pleasant to read like all her novels, but in the context of the Booker Prize, unable to compete with the contemporaneity and intellectual weight of some of the other contenders. It is possible that this unchallenging novel could win as the usual ‘safe’ middle-of-the road choice made by Booker judges.

The Fisherman is the story of a good middleclass Christian family in a small town in West Nigeria. The father is a bank executive, the mother has a market stall and the children do well in the local school — till the father is transferred to a town a thousand kilometres away  and the family disintegrates without his firm paternal authority.

So far so normal. But the story now begins to take a violent turn. Ikenna, the eldest brother is terrified by a prophesy made by a village vagabond and believes he will be killed by his brother Boja. He becomes psychotic and brother kills brother in an escalating wave of fear and suspicion. Fratricide, necrophilia, the killing of the sad crazy tramp — the brutality is unrelenting, destroying the erstwhile successful family.

As a backdrop to these volatile events, The Fisherman offers a beautifully written portrayal of life in modern Nigeria complete with local folklore, superstitions and cultural complexity.