Topo Gigio in St Helen’s Road has certainly stood the test of time; it’s been the go-to Italian restaurant in Swansea for 36 years but for some reason or other, not a place I’ve been to! 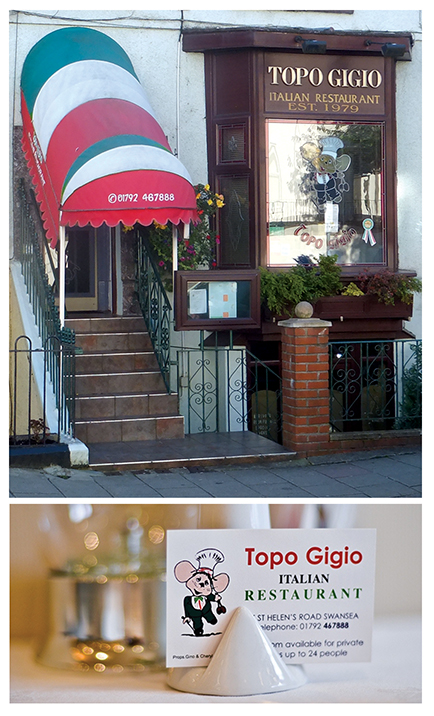 While living in London in the 80s a favourite of mine was a restaurant in Soho with the same name – I understood that it belonged to the same family.

So many times I have driven past the Swansea one and given a friendly nod to the cute little mouse doing a dance in the stained glass window, each time promising myself that I would pop in to see if the food was up to the standard of its London counterpart. And so it was, that last month I finally got to see the inside of this archetypal Italian Restaurante.

I had called ahead to book our table, mentioning that it was to be a birthday celebration, and was delighted to see that there was a banner above our table and a sprinkling of sparkly decorations scattered around the tablecloth.

It was quietly reassuring to find that there was an Italian family complete with sleeping bambina, tucking into an early supper of plates of pasta and cured meats.

As a family we used to holiday in Northern Italy and grew to love its rich cuisine – it’s certainly not for the faint hearted or those on a fat-free diet. I was so pleased to see that so many of my favourites featured on the menu.

Aubergine Parmigiana, Parma ham with melon, saltimbocca and spaghetti carbonara were all present and correct, along with a few house specialities such as sole Topo Gigio – little fillets of sole in a creamy white wine sauce with prawns and tomato –  and chicken a la crème – needs no explanation!

Later, having demolished platters of garlicky king prawns, whitebait and the aforementioned Parma ham, followed by fillet steaks, sole and chicken we were all far too replete to manage anything more than an espresso.

Chef and owner Gino Carra learnt to cook in his native southern Italy, and there is something rather lovely about this slightly old fashioned style of food – it’s comfort food at its best. If I had to personify Topo Gigio’s it wouldn’t be a mouse but a big hearted bear hug. I won’t be leaving it another 36 years before I go back.