Combe dancing in The Quantocks

The Quantocks are litter-ed with combes and have to be one of the most fun places to ride a mount-ain bike in the UK. Think of long single track descents, multiple stream cross-ings, fast open riding and all within an area no larger than 40 square km. A natural trail centre! That cliché ‘happiness is only a bike ride away’ certainly applies here, I don’t think I’ve ever smiled so much whilst riding my bike. It’s only a 2 hour drive from Swansea and being motorway the majority of the way, it’s a fairly straight-forward journey. 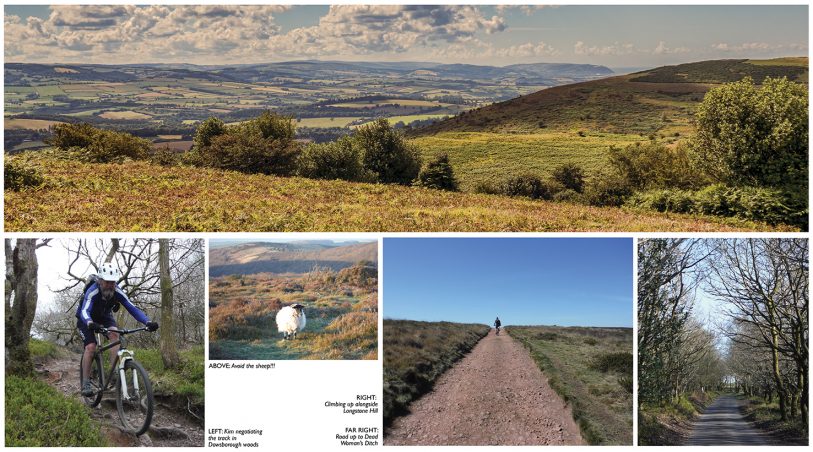 Sitting approx. 8 miles east of Bridgwater The Quantock Hills (England’s first area of outstanding natural beauty) were formed over 419 million years ago and before it became the relative safe haven it is today, endured many conflicts as different factions battled for ownership of the land. The earliest evidence of this dates back to the Bronze Age (there are still signs here of Bronze Age round barrows). However it was the Iron Age times that have left a more obvious stamp on the area with hill forts at both Dowsborough and Ruborough as well as many other earthwork enclosures. The Romans also spent some time here but there is little evidence of this apart from some silver coins which were found at West Bagborough.

Things came to an end with the battle of Sedgemoor, reputedly the last battle in England. It seems that James Scott the 1st Duke of Monmouth took umbrage to the then Roman Catholic King of England James II, unfortunately for The Duke, the Monarch had his way and together with some of his men, Scott was charged with treason and executed for his troubles. Today things are a little calmer and walkers, horse riders and mountain bikers tend to greet each other with a nod or a wave rather than challenging each other with a sword; this leads to a much happier place! 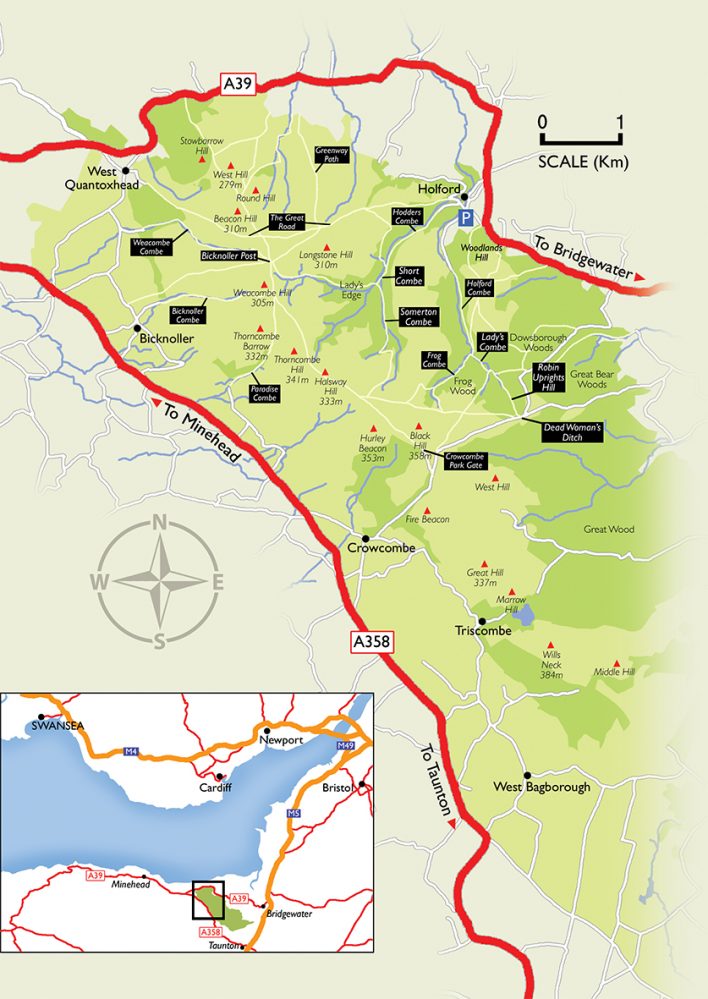 From a biking aspect The Quantocks are an absolute paradise as all of the tracks are such fun to ride! The problem is deciding on a loop; now normally I’m not one to advocate repeating sections of trail, but here it makes sense as whilst all the descents into the combes are certainly worth riding, some of the climbs back out are more challenging than others. The last occasion I rode here I had shared some small talk and a large piece of fruit cake with some horse riders before setting off. During the course of my ride our paths crossed 3 times, each time I popped out of a combe, there they were and by the end of the day it felt as if we’d known each other for ever! It’s that sort of place, so for this article I’m not going to suggest a route as such, instead I’m going to recommend what in my opinion are some of the best descents and also some of the easier ways back up to link them all together.

By far the quickest way across the tops is to ride the ancient path now designated a bridleway that traverses the entire ridge in a general north/south direction; ridden either way this offers some fast flowing riding over undulating terrain. The views are great from up here and on a clear day it’s possible to see Gower. Whilst on top it’s worth taking some time to look around, not only does this give a different perspective on the oak wooded valleys but also gives you a feel for the lie of the land and is a good opportunity to get your bearings.

Last winter I was lucky to see a complete double rainbow, the bottom end of which dropped into Hinkley Point nuclear power station – somewhat destroying the popular myth! I’d certainly recommend taking OS Explorer 140 with you, or if not then ask one of the local riders you’ll invariably come across for some advice on what to ride. It’s not a place you’re likely to get lost in, but if you have any doubts as to your whereabouts simply head up onto the ridge and you’ll soon find your way.

Now where to park? If you’re up for a climb to start then I’d suggest parking in Holford and heading up onto Longstone Hill and beyond to Beacon Hill. Whilst this is a rather long climb, it’s one of the easiest ways up and offers panoramic views over the channel and across the tops of the hills to your left. This of course means you finish with the rather enchanting descent down from Bicknoller Post into Hodder’s Combe. The other option is to start at the rather forlorn sounding Dead Woman’s Ditch. Now there’s a story here:

The origin of the ditch itself is thought to be Iron Age, but the name comes from a rather more sinister occurrence. John Walford was a charcoal burner who fell under the spell of a certain Jane Thorney whilst betrothed to his one true love Ann Rich. It wasn’t long before Jane was expecting a child and John despite his love for Ann, out of duty married her. Jane taunted him constantly about the loss of his true love until one day when returning from their local inn it seems he’d finally had enough and strangled her, burying the body in the ditch. A very brief trial was held at the end of which a gibbet was prepared for his

execution. After his death the body was placed in the gibbet and left hanging for a year. That’s all a little sombre so back to the riding; from Dead Woman’s Ditch you can either climb a little up to The Black Hill or head north across the road for a short distance and drop down a great piece of singletrack that leads into Holford Combe. Here, if you’re feeling particularly flush the hotel does a rather good cream tea. To finish the ride, the drop back down to the car from Crowcombe Park Gate is a steady gradual descent and a great way to end the day. There are also two great descents off Robin Uprights hill, one which takes you west and pops you out onto the tarmac for a short climb back up to Dead Woman’s Ditch, the other heads north from the remains of the fort and leads you out onto Woodlands Hill.

Most of the tracks here are stony and rooty and whilst challenging all are certainly manageable at speed; but the descent into Frog Combe comes as rather a surprise. The smooth grassy track off Frog Hill lulls you into a false sense of security as you head into the trees at warp speed to be confronted with one of those ‘break don’t break’ moments. I’ll say no more, just enjoy, but you have been warned! The descents I’ve talked about so far have all left the ridge in a northerly direction, but of course there are also many off the other side heading in a south westerly direction. I think my favourite has to be down through Weacombe Combe. Once at the bottom, head south contouring around the hills before heading up Paradise Combe; then if your legs are up for another climb, drop down the magnificent Bicknoller Combe. This side of the hill has some great pubs: in Triscombe, Crowcombe and Bicknoller, all offer food and are stocked with some excellent ales. The Bluebell Inn at Triscombe is probably the best option.

I could go on, but don’t take my word for it, go and see for yourself. The Quantock Hills are a place I return to time and time again, the route possibilities are endless and whilst you will climb a lot, the descents are certainly all worth the effort and I guarantee you’ll return!