TATIANA IS BACK THIS MONTH WITH A RECIPE THAT USES AN UNCOMMON FRUIT, WHICH MIGHT REQUIRE A BIT OF TRACKING DOWN 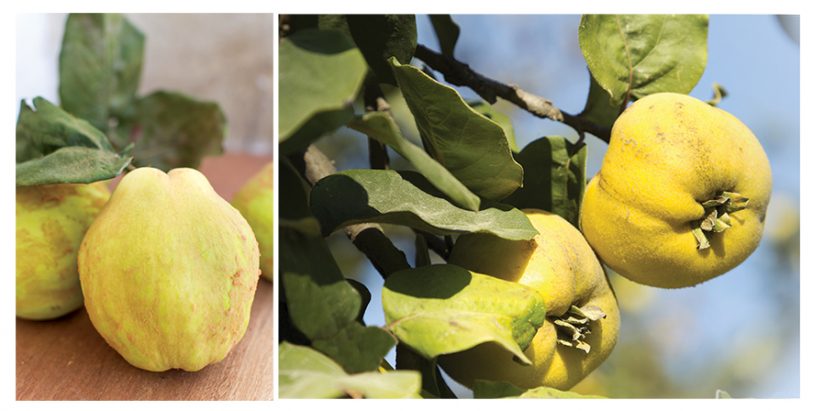 Some day my quince will come…

Quince is a fruit close to my heart; I grew up with it, wishing for its short season to come, hoping for its exquisite flavour. I love it so much that I have named my Cookery School after it.

Here, in Portugal, quince is called marmelo and we make marmelada (marmalade) out of it (known as quince cheese in the UK).

So where does Seville orange marmalade come from? We’ll it’s actually an interesting story.

The first shipments of marmelada, packed in wooden boxes, arrived in London in 1495. Fabulously expensive, it became a popular gift among noble families.

In the 18th century, the Scots pioneered the switchover from quince to orange marmalade. Many regions of the country were too cold for quince trees to flourish, and imported Seville (bitter) oranges had been available since the late 15th century. Cooks were now producing a thinner form of marmalade, stored in pots or glasses, achieved through a shorter cooking time.

More significant perhaps than the switch from quince to orange marmalade, was the new Scottish pattern of serving marmalade as a breakfast and tea time food rather than an after-dinner digestive.

What is a quince?

Quince is an ancient fruit, found in Roman cooking and grown across the Mediterranean and south east Asia. It grows on small trees and is closely related to apples and pears, but it lacks their immediate edibility and appeal.

The fruit is knobbly and ugly, with an irregular shape and often a grey fur — especially when the fruit has been picked unripe. The ripest, nicest quince will have a golden tone and smooth skin, but even ripe quince don’t taste very good raw. It also has an extremely tough and spongy flesh, which is difficult to cut.

So the question is… why bother?

I’ll tell you why…

As much as I love marmalada (quince cheese or menbrillo) it is not my favourite way to eat quince. The one that really makes my mouth water is this French adaptation of the mighty tarte tatin 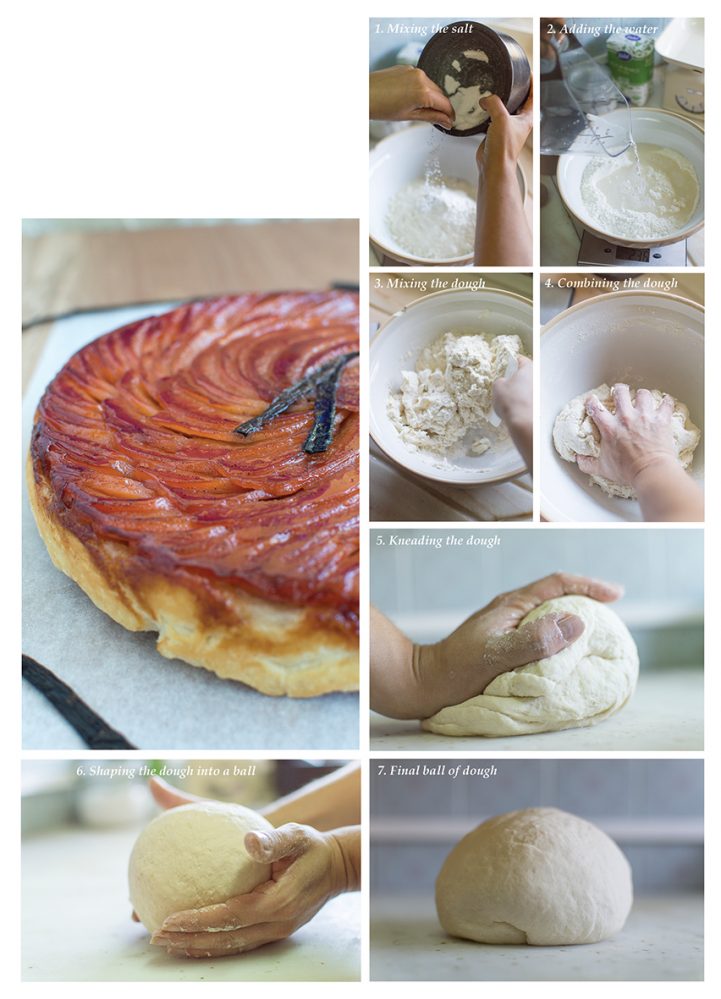 HOW TO MAKE THE PUFF PASTRY:

Firstly grab a large bowl and measure the flour and salt into it and give it a mix.

Tip #1: Make sure your salt is finely ground; if you leave it unground it will break the pastry and ruin your layers.

Slowly add the water and combine all the ingredients with the help of a plastic dough scraper or a spoon. Once it starts to come together tip the bowl over onto the worktop, scraping all the bits of flour off your bowl, and knead the dough; without adding any more flour to your table.

Tip #2: If you add any more flour at this stage it will disturb the delicate flour/water balance.

Use the heel of your hand to push the dough away from you, then fold the flap back towards you and give it a quarter turn. Press down on another section of the dough and do the same thing. Knead it for 10 minutes or until the dough is smooth, soft, supple and elastic and does not feel tacky.

Tip #3:  If you are using an electric mixer, use the dough hook and mix on medium speed for 5 to 7 minutes, or as long as it takes to create a smooth dough. The dough should clear the sides of the bowl but stick to the bottom of the bowl. The finished dough will be springy, elastic, not tacky or sticky.

Sprinkle flour on your work surface and place the dough on top. Cover with a damp tea towel or cling film and allow it to rest for about 15 minutes to relax the gluten.

Once rested, roll out the ball of dough from the centre outwards, until you have formed a rect-angle. Cover loosely with cling film. In the mean-while roll out your block of margarine, which should be firm but not too cold, to 1cm thick, or half the size of the dough rectangle (25cm X 25cm).

Tip #4: Place the margarine in between 2 sheets of parchment paper and beat it with the rolling pin, then roll it out to the size. If you prefer to use butter please go ahead and do so. The professional recipes these days all use the reliable margarine but back in the day it used to be all lard or a mixture between lard and butter.

Place the fat on one of the sides of the dough. Fold the dough over the butter, making sure it’s completely enclosed, so that the fat doesn’t ooze out.

Tip #5: There are several ways to fold and layer dough but we are giving you the simplest one. If you are a bit more experienced go ahead and fold it into thirds like a letter.

Lightly flour your work surface then roll the dough, away from you, into a rectangle of about 30 X 50 cm. Brush the excess flour off the dough and fold in half. Wrap in cling film and refrigerate for 15 minutes. Repeat another 2 times.

Tip #6: Always brush away any excess flour on your dough or the sides won’t stick together and you might have air bubbles.

After the last fold and rest, return the dough to your lightly floured work surface and roll it again, away from you, into a square of about 50 X 50 cm. Cut out a circle, bigger than your pan so you have plenty of dough to tuck in the sides of the pan. Keep in the fridge until you are ready to use it. 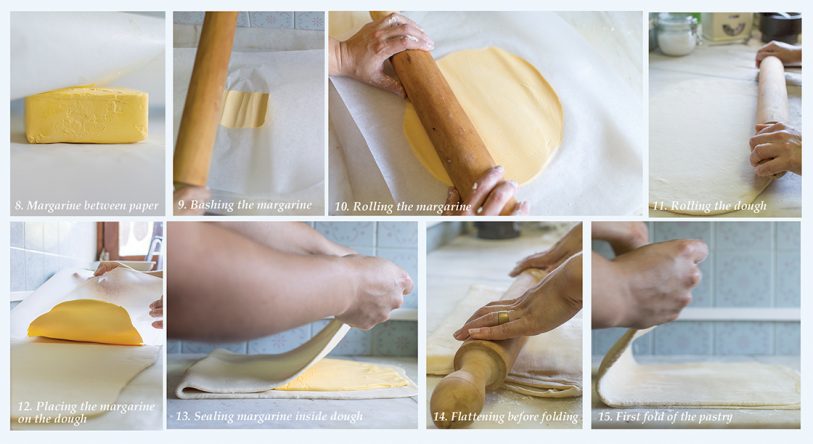 How to make the filling:

Peel, core and slice the quinces finely. Rub the slices with lemon juice.

Tip #7: Make sure to cut the quinces in a uniform manner, it will help you later. Rubbing the slices of quince with lemon juice will help to stop discolouration.

In a pan combine the sugar, port and vanilla. Place on a low heat and stir. Let the sugar dissolve and cook until the mixture forms a very light caramel.

Tip #8: Please remember never ever to touch or taste hot caramel, as it can burn really badly.

Add the quince slices and stir gently so not to break them. Cook until soft on a low heat. Once cooked, take it off the heat and arrange the slices in a tarte tatin pan in a circular fan pattern until you cover the bottom of the pan completely.

Pour the remaining slices and juices from the pan on top of the fruit and spread them evenly. Spread the butter on top.

Now take your rolled out puff pastry and place over the fruit; tucking the pastry down the sides of the pan. Make small holes in the pastry with the tip of the knife.

Tip #9: The holes will allow the air to escape and prevent an exploding tart.

Place in the oven for about 30-35 minutes or until the pastry is nicely golden and crisp.

To make it look like a tarte tatin you need to turn it out, which isn’t hard – but you do need to be careful with that hot caramel. So get a serving plate or board larger than your pan and put on oven glove to protect the arm holding the board. Put the board or plate on top of the pan, then quickly, carefully and confidently turn it out. Put it to one side for a few minutes, so the caramel can cool down, then divide it up and serve with a spoonful of crème fraîche or ice cream. 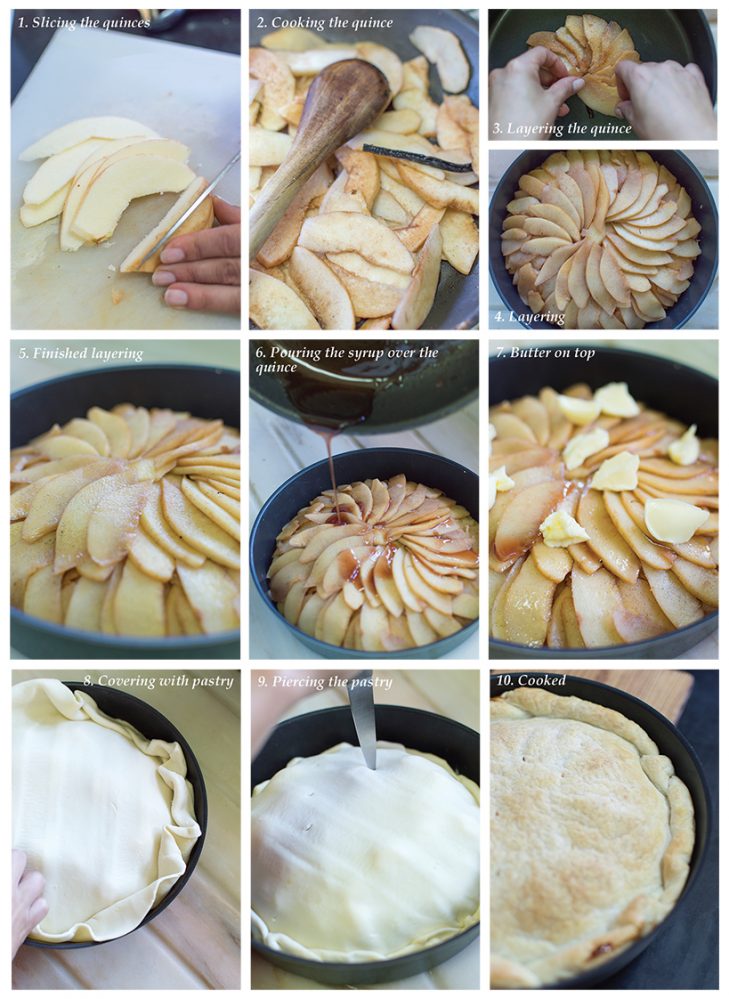