‘There is a green hill far away,

Without a city wall,

Where the dear Lord was crucified,

Who died to save us all.’

In childhood, I was much puzzled each year when we came to sing this well-known Good Friday hymn. Why would a hill’s lack of a wall merit particular comment? Then one day I discovered that ‘without’ was a somewhat archaic way of saying ‘outside’, and the words of the hymn suddenly began to make sense to me (many modern renderings of the hymn now ‘helpfully’ change the words – increasing understanding, perhaps, but destroying the poetry in the process).

One thing the gospel record is clear on is that Jesus’ crucifixion in Jerusalem, on the hill known as Golgotha – ‘the place of the skull’ – actually took place outside the city wall. Yet since medieval times, the Church has been acutely aware of potential criticism of the traditional site – the Church of the Holy Sepulchre, which I talked about last month – on the grounds that it is most clearly not outside the city walls of the Old City of Jerusalem!

As early as 754 AD, for example, St Willibald of Wessex made the following rather ambiguous assertion: ‘Helena, when she found the Cross, arranged that place so as to be within the city.’ Within a few centuries, other writers had begun to find it necessary to make a defence of the traditional Golgotha, arguing that the Emperor Hadrian had enclosed the burial site within the city limits when rebuilding and expanding the city during the second century.

Nevertheless, the doubts continued to increase during the post-Reformation era, particularly amongst Protestants – no doubt exacerbated by the fact that their denominations had no territorial jurisdiction over the Church of the Holy Sepulchre. Being cynical, it’s easy to see how the pre-eminent churches of the growing Protestant powers of northern Europe – not least Great Britain – felt a ‘need’ for a spiritual focus of their own in Jerusalem, that was independent to and distinctive from the Church of the Holy Sepulchre. In the nineteenth century, this focus was found in the so-called ‘Garden Tomb’. And so, following our visit to the Church of the Holy Sepulchre, it was only proper that we pilgrims should visit this rival enterprise – in the interests of ‘fair play’, naturally.

The Garden Tomb is a rock-cut tomb, just 200 metres from the Damascus Gate, north of (and undoubtedly ‘without’) the medieval city wall. It was unearthed in 1867, and stands adjacent to a rocky escarpment that since the mid-nineteenth century has been suggested as the real Golgotha, or ‘Skull Hill’, due to its supposed resemblance to a skull. The discovery of an ancient wine press and cistern close by have been offered as further evidence that this area was once a garden, and that the geography and topography fit the description found in John’s gospel: ‘Now in the place where He was crucified, there was a garden, and in the garden a new tomb in which no-one had yet been laid.’ (John 19.41). 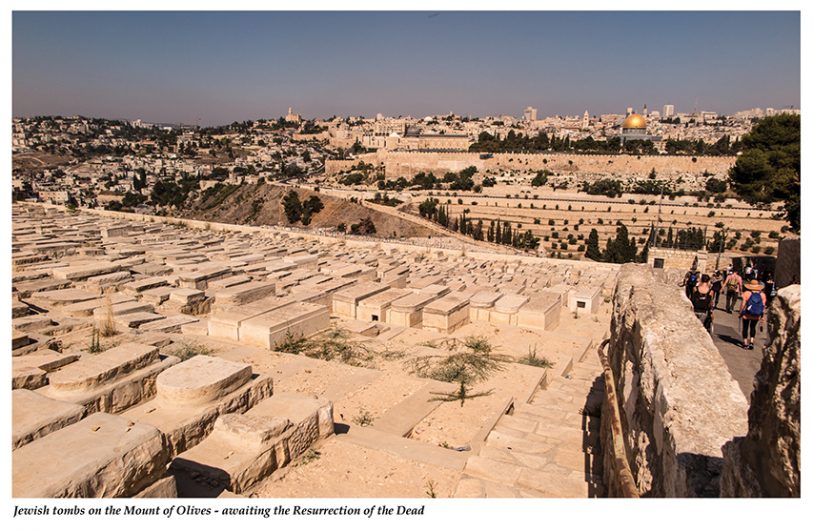 This alternative site to the Church of the Holy Sepulchre was being heavily promoted by the 1870s by several leading Protestants residing in Jerusalem, including the Right Revd Samuel Gobat, the Protestant Bishop of Jerusalem. However, perhaps the most influential and decisive figure to come out in favour of the Garden Tomb site was Major-General Charles Gordon, who visited Jerusalem in 1883. Thereafter the terms ‘Garden Tomb’ and ‘Gordon’s Tomb’ have become virtually synonymous – so much so that many guide books have erroneously declared that Gordon was the first to discover the site. In fact, Gordon was much influenced in his thinking by Claude Conder, a lieutenant in the Royal Engineers, who had been appointed in 1872 to conduct a mapping survey of Western Palestine. However, when we consider the following quotation from Conder, we might have good cause to doubt his objectivity. This is what Conder had to say about the traditional site of Calvary, the Church of the Holy Sepulchre, and the Easter ceremonies conducted there:

‘There are those who would willingly look upon it [the Church of the Holy Sepulchre] as the real place of the Saviour’s Tomb, but I confess that, for myself, having twice witnessed the annual orgy which disgraces its walls, the annual imposture which is countenanced by its priests, and the fierce emotions of sectarian hate and blind fanaticism which are called forth by the supposed miracle [the appearance of the Easter Fire], and remembering the tale of blood connected with the history of the Church, I should be loath to think that the Sacred Tomb had been a witness for so many years of so much human ignorance, folly, and crime.’

No bias at work there, then!

There is no doubt whatsoever of the beauty and tranquility of the Garden Tomb – and our visit to it couldn’t have been more different than the bustle and crowds with the Church of the Holy Sepulchre. Our guide at the Garden Tomb, provided by the non-denomination Christian trust that oversees the site, couldn’t have been more courteous or more compelling in his enthusiasm. And yet I remain unconvinced. The visual appearance of ‘Skull Hill’ is, I think, unremarkable – and, of course, is based purely on how it looks now and over the past one hundred and fifty years or so during which it has been photographed: how close the resemblance was two thousand years ago is somewhat conjectural. The discovery of one rock-hewn tomb of approximately the right date nearby is hardly conclusive, either; nor the nearby presence of a wine press and cistern – which are far from uncommon objects to be unearthed by archaeologists in the Middle East!

Finally, the testimony of almost seventeen centuries of observance, whilst not absolute, is surely stronger than that of a mere one hundred and fifty years. So, sorry – for me the ‘Garden Tomb’ is a misnomer. Someone’s garden, perhaps; and maybe someone’s tomb: but not Jesus’.

But, on the subject of gardens, one of the principal foci of our next day’s journeying was the place where Jesus spent his final evening – the Garden of Gethsemane. This place, meaning ‘oil-press’, is mentioned by name in both Matthew and Mark’s gospels as the place where Jesus prayed, and where his disciples slept, just before his arrest. Gethsemane is found at the foot of the Mount of Olives, a location that has several important associations for Christians. 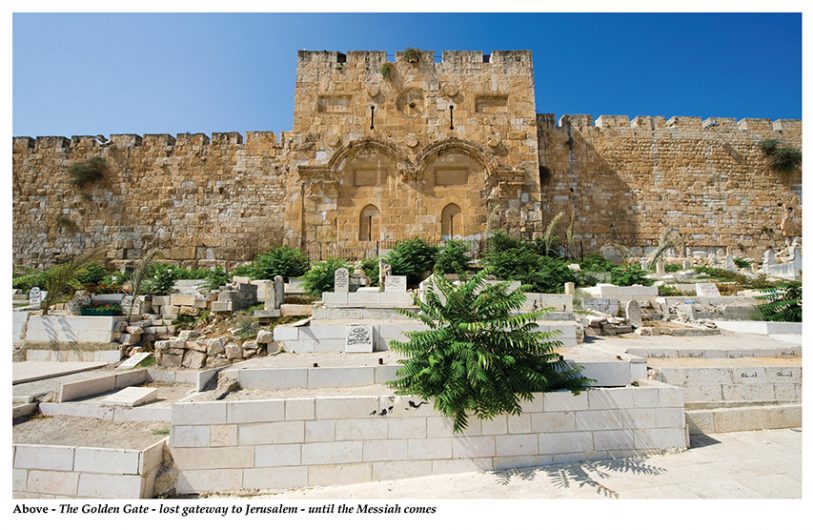 Firstly, the Mount of Olives stands on the route from Bethany to Jerusalem, and is the place from which Jesus looked down upon Jerusalem, just before his triumphal entry into the Holy City on Palm Sunday. On seeing the city at the beginning of his final days, Jesus responded by weeping for Jerusalem (Luke 19.41), mindful of its future destruction. This scene is recalled by the beautiful twentieth century Roman Catholic church of Dominus Flevit (in Latin ‘The Lord Wept’). The architect Antonio Barluzzi fashioned the church, dedicated in 1955, in the shape of a teardrop to symbolize the tears of Christ. It was here, on the Feast of the Ascension, that our pilgrim group celebrated the first Mass of our pilgrimage.

For this is the second great association of the Mount of Olives for Christians – as the place where Christ ascended into the heavens, forty days after his Resurrection. It was tremendously powerful for us to celebrate the Eucharist together on Ascension Day on the mount of the Ascension itself, in sight of the city where Christianity began, and close to the place where, according to Luke, Christ gave his final commission to his disciples: ‘You will receive power when the Holy Spirit has come upon you, and you will be my witnesses in Jerusalem and in all Judea and Samaria, and to the end of the earth.’ (Acts 1.8).

Of course, the Mount of Olives has long been sacred in Jewish tradition. An apocalyptic prophesy in the Book of Zechariah describes the Coming of the Lord to this place at the end of time, a shattering earthquake that will split the mountain in two, and the beginning of the resurrection of the dead and final judgement (Zechariah 14.4). Since antiquity, many Jews have therefore wanted to be buried on the Mount of Olives, and there are an estimated 150,000 graves on the Mount, include the tombs of Absalom, Zechariah, Haggai, Malachi – and Robert Maxwell.

From the Mount of Olives, we have the most glorious vistas of the Old City. This includes the Golden Gate, the only eastern gate of the Temple Mount, and one of only two that used to access Jerusalem from that side. The Golden Gate has been walled up since medieval times, in fulfillment of prophecy (Ezekiel 44.1-3). According to Jewish tradition, the divine presence used to appear through this gate, and will appear again when the Messiah comes. In Christian apocryphal texts, the gate was the scene of the meeting between Mary and her parents following the Annunciation, so the gate became a symbol of the virgin birth. It is also said, in Christian tradition, that this is the gate Jesus passed through on Palm Sunday, giving it a Christian messianic importance beside the Jewish one. As for its significance for Muslims, the gate was walled up in 1541 by Suleiman the Magnificent, and it is said that he sealed off the Golden Gate to prevent the Messiah’s entrance. Hmm…for Christians, rather akin to shutting the stable door after the horse (or should that be the donkey?) has bolted!

I end this month’s article where I began: in a garden. And, once again, we are confronted with uncertainty. No less than four places are claimed to be the place where Jesus prayed on the night he was betrayed. The Roman Catholic Church of All Nations overlooks a garden which supposedly holds the ‘Rock of the Agony’; others advocate a location near the Tomb of the Virgin to the north; the Greek Orthodox favour a location a little to the east; whilst the Russian Orthodox focus is upon an orchard next to the golden onion-domed Church of Maria Magdalene. Which one is right? Well, they are all in approximately the same area – near the foot of the Mount of Olives – but we can’t be much more specific. The olive trees nearby include some quite old specimens, that have been dated back eight hundred years or more – but it’s fanciful to suggest that any are two thousand years old, and that this tree (or that tree) is actually the one beneath which Jesus prayed.

But at least we’re roughly in the right place. And as I reflect on two gardens – Gordon’s Garden, with its doubtful tomb that nevertheless remains a focus for pilgrimage; and the Garden of Gethsemane, at the foot, somewhere, of the Mount of Olives – so I’m reminded of a third garden, even more mystical and elusive, that we know as Eden. And the following words of G. K. Chesterton (with which I will end this month) remind me of God’s constant desire to meet us – where else? – but in a garden.

On the third day the friends of Christ coming at daybreak to the place found the grave empty and the stone rolled away. In varying ways they realised the new wonder; but even they hardly realised that the world had died in the night. What they were looking at was the first day of a new creation, with a new heaven and a new earth; and in the semblance of the gardener God walked again in the garden, in the cool not of the evening but the dawn. (G. K. Chesterton)