The evolutionary biologist J.B.S. Haldane famously remarked that ‘God – if he exists – must have an inordinate fondness for beetles’. And indeed, one third of all the animal species in the world are beetles. Over 370,000 different species of beetle are known to date, and new ones are being discovered all the time. In comparison to continental Europe, not to mention tropical regions, Britain is home to only very few beetle species, and yet over 4000 are known from this country. Of these, 361 belong to the family Carabidae, the ground and tiger beetles, many of which are startlingly beautiful with shimmering metallic colours more reminiscent of jewellery than insects.

Their iridescent sheen can easily distract from the fact that most ground beetles and all tiger beetles are voracious predators the likes of which, on a larger scale, would frighten the most seasoned sci-fi fans. Tiger beetles, as their name suggests, are particularly fierce, both in looks and actions. Equipped with enormous sickle-shaped jaws (photo 1) big enough to even reach around their partner during mating (photo 2) they chase after their prey at 2 metres (100 times their body length) per second.

Recent studies have shown that they have to stop regularly during a hunt to re-orient themselves, because while running at this speed their eyes cannot keep up and everything around them blurs. In order to avoid running head first into obstacles during their breakneck dashes, tiger beetles hold their antennae stiffly forward just above the ground when running, which allows them to make last minute course adjustments and avoid collisions. When scientists artificially shortened their antennae, they regularly bumped into objects while trying to hunt. 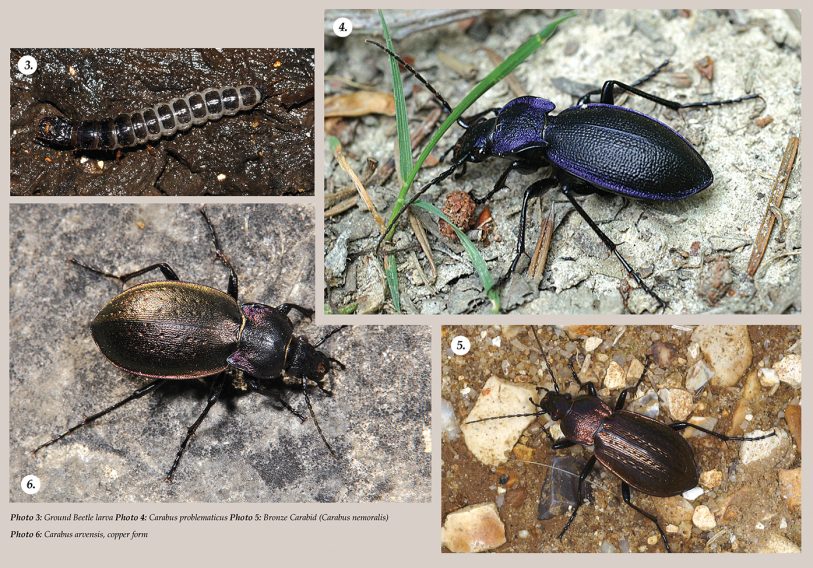 Two of the five British tiger beetles can be found locally, the Dune Tiger Beetle (Cicindela maritima) (photo 1), which, true to its name, is a dune dweller and can often be spotted at Whiteford, and the Green Tiger Beetle (Cicindela campestris) (photo 2). The Green Tiger Beetle is a little less particular in its habitat requirements and can be found in various locations that provide dry, sunny ground including heathlands, sandy grassland as well as sand dunes. It is worth keeping an eye out for Green Tiger Beetles in those habitats, particularly along the South Gower coast path. Both species of tiger beetle are strong fliers and will take to the air when startled, something to bear in mind when sneaking up on one hoping for the perfect photo, only to end up with a close up shot of a bit of sand dune instead.

In contrast to tiger beetles, ground beetles tend to be nocturnal and primarily hunt by smell and touch rather than by sight. As a result, they do not engage in the same frantic high speed chases tiger beetles do, but they are still rather fleet of foot, as everyone who has startled a resting ground beetle by turning over a stone or rotting log will be able to attest.

As their name suggests, the majority of ground beetles spend their entire lives on the ground, hiding under objects or in leaf litter and loose soil during the day and coming out to hunt at night. Their larvae, too, are generally ground and soil dwellers (photo 3). Ground beetle larvae are more predatory.

Most of the more familiar ground beetle species are nocturnal and terrestrial, for example the large and striking Violet Ground Beetle (Carabus violaceus), the very similar Carabus problematicus (photo 4) and the Bronze Carabid (Carabus nemoralis) (photo 5), which is a particularly beneficial species because its preferred prey are the eggs and young stages of the Grey Garden Slug (Deroceras reticulatum), an important agricultural and garden pest.  Others, for example Carabus arvensis (photo 6), which occurs in as many as five different metallic colour forms (copper, blue, green, purple and black) and the stunningly beau-tiful Carabus nitens (photo 7) are unusual in that they are mainly active during the day. 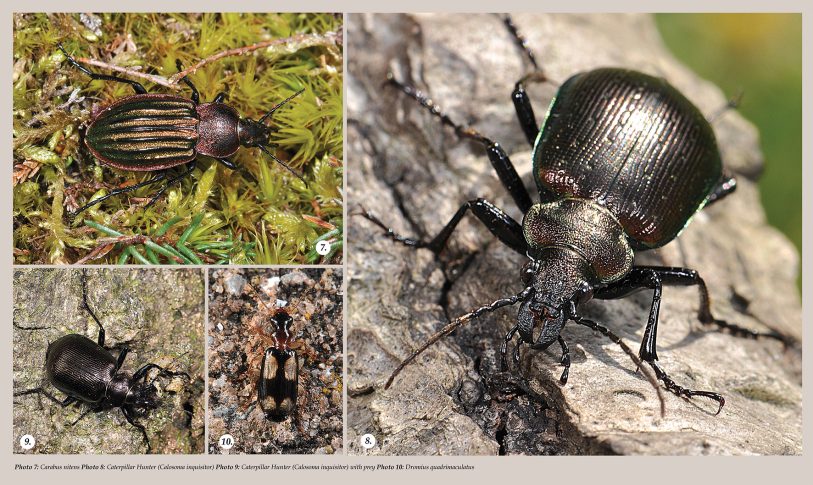 A number of particularly enterprising ground beetle species break the stereotype and take to the trees in search of prey. The most conspicuous of these is the aptly named Caterpillar Hunter (Calosoma inquisitor) (photo 8), which is so efficient at scouring the canopy for caterpillars (photo 9) that its close relative Calosoma sycophanta is even used as a biological control agent in the USA, where the inadvertently introduced European Gypsy Moth (Lymantria dispar) is a major pest. In addition to the cater pillar hunters, some smaller ground beetle species have taken the leap as well, for example the minuscule Dromius quadrimaculatus (photo 10). It only measures 5-6 mm, small enough to pursue its prey into all but the tiniest cracks in the bark, making this pretty little beetle the stuff of nightmares for every tree dwelling springtail or mite.

Another tiny yet deadly beauty is the Green socks Peacock (Elaphrus riparius) (photo 11), which hunts on open bare mud and sand on river margins and lake shores. Its wing cases possess a distinctive embossed pattern unique to the genus Elaphrus.

While many of the smaller ground beetles have an annual life cycle, it is not uncommon for the larger species to live for a number of years. The rare Kugelann’s Ground Beetle (Poecilus kugelanni) (photo 12), for example, has recently been shown to survive for up to four years in the wild. During the coldest part of the year, the overwintering beetles hide in sheltered places or bury deep into the soil.

A number of ground beetle species are able to remain active at very low temperatures and have even been observed hunting with the ground covered in snow. These active beetles constitute an important food source for shrews which do not hibernate and require a constant supply of invertebrate prey, something particularly hard to come by during the winter when most insects are dormant. 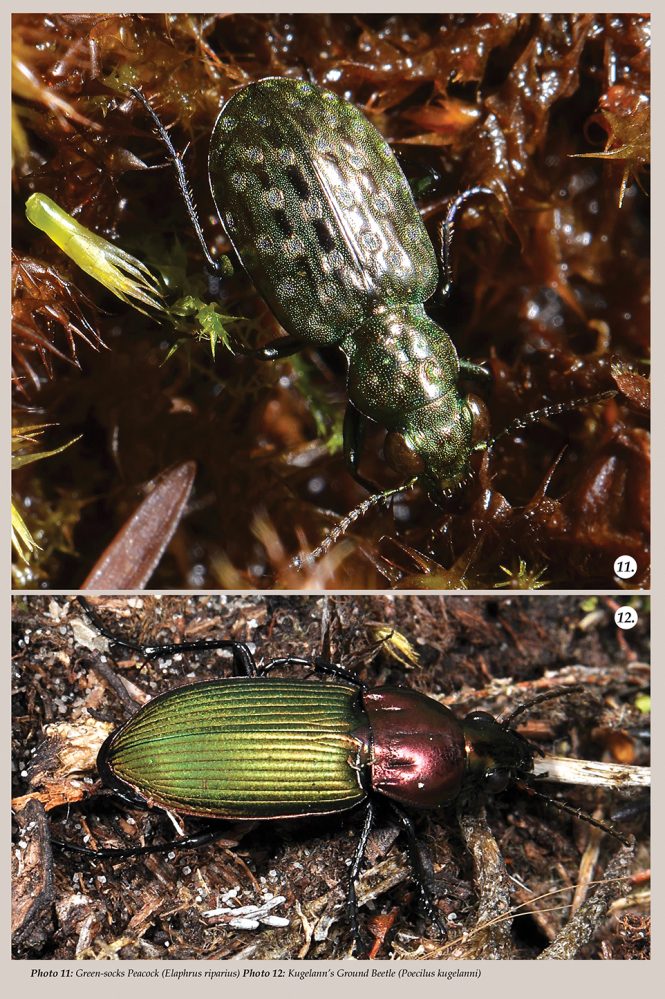 From a gardener’s point of view, ground beetles are very beneficial insects, consuming large numbers of various pest species and in turn serving as a food source for other useful species. Many ground beetles are not exclusively predatory but will also opportunistically feed on carrion (both vertebrate and invertebrate) and plant matter such as fallen fruit. Some species are particularly fond of weed seeds, which can make up a large part of their diet. One of these is the small, black Strawberry Seed Beetle (Harpalus rufipes), so named because it also likes to eat the seeds off strawberries given the chance. By doing this, it sometimes makes a nuisance of itself. However, a few bald strawberries are a small price to pay for its and its more carnivorous relatives’ services, patrolling the garden tirelessly every night helping to keep it weed and pest free year round, and all while wearing their delightful, shiny uniforms.