LIAM’S car of the month is a little different this time and is unlikely to be available to purchase.

Production of the Land Rover DEFENDER is due to end anytime soon and Liam was lucky enough to be invited to the GOODWOOD REVIVAL, to take part in its lap of honour 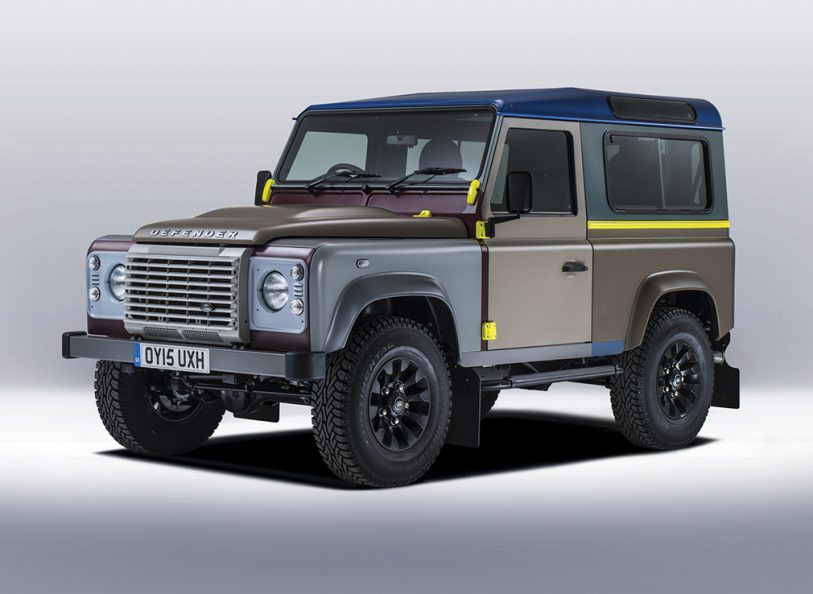 6:45am. Hawthorns B&B, Wisborough Green, West Sussex. We’re up, showered and dressed already, I’m even wearing a tie. For me this kind of behaviour is extremely unusual: me, in a tie, it doesn’t happen often. Factor in that it’s a Sunday morning too and we’re nigh-on into the stuff of miracles.

I’ve told Sally, the lady that owns Hawthorns, that neither Rebecca nor I will be around for breakfast; she’s to have a lie in. Having stayed here before we know where everything is, a quick cuppa and a bowl of cereal will suffice. The irony is our appointment this morning could easily qualify for the title The Full English, it couldn’t be anything else in fact.

After 67 years of production, Land-Rover, sadly, is going to stop making what’s now referred to as the Defender. At the 2015 Goodwood Revival meeting and in front of a capacity crowd, 52 pre-1966 Land-Rovers of all shapes, sizes and variants are going to take to the track in order to celebrate the life of this most quintessentially British  and now legendary 4×4. They’ve very kindly asked if we’d like to be in one. We couldn’t say no. 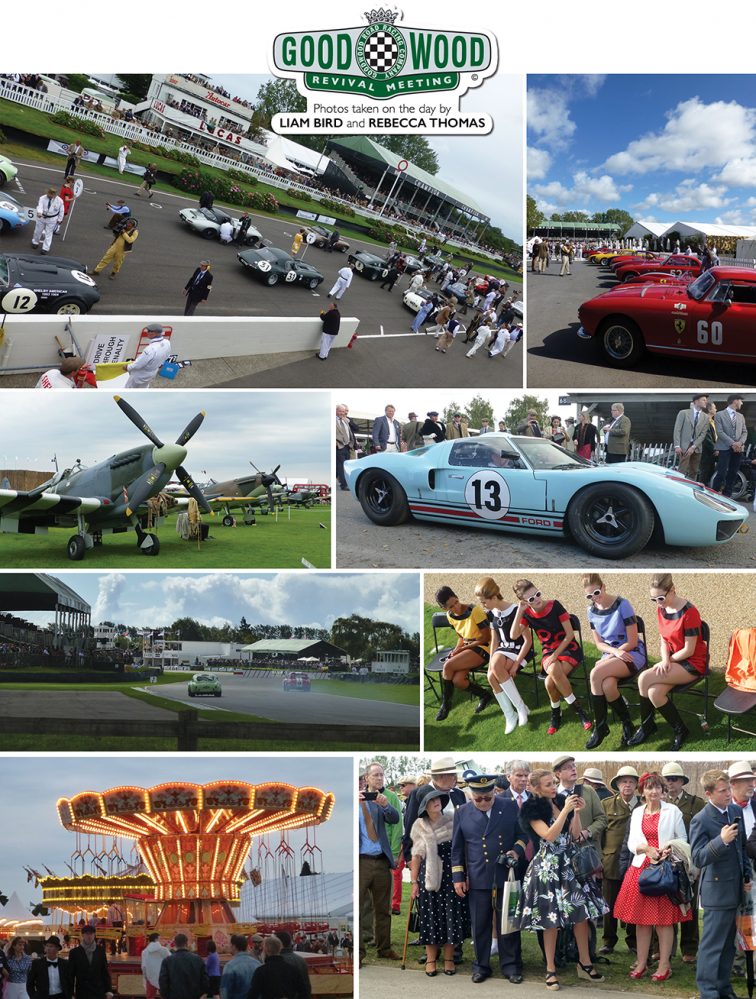 With tweeds donned, by 9am we’ve completed the short drive over the Downs to Goodwood. People have been arriving since 7am and the heady aromas of bacon, coffee, and racing oil fill the air as some self-consciously change into their vintage clothing and make their way through the fairground, over the Bailey bridge and on towards the circuit’s grandstands. As they find their way to their preferred vantage points, check their programmes and buy souvenirs and accessories before the crowds really arrive, we make our way to the Driver’s Club to sign in. Despite the fact that neither of us will actually be driving today (more of which later) forms have to be filled-in and passes obtained. Safety first! I sign my name below Ross Brawn, the former Ferrari F1 team principle and once owner of the Brawn GP team; they acquired the Honda team in early 2009, and won the Formula One Constructors and Drivers Championships with Jenson Button the same year. If they’d have let me I’d have kept that form as my own souvenir.

“Our” Land-Rovers are in a parc ferme about halfway along Goodwood’s Lavant straight, so after first being fitted with the appropriate orange wristbands and given our final instructions it’s a short walk across the paddock for us before we cross one of Goodwood’s live runways – what now is the motor-racing circuit was once the peri-track of RAF Westhampnett. Goodwood was once a Spitfire base and is still very much an active airfield. Already it’s 10-past-10.

We’re a little early but that’s good news as there’s time to admire the machinery, meet some of the owners and gather some information about the very car in which we’ll be taking to the track.

715 GC belongs to Tom, a softly spoken Shropshire man who eats, sleeps and breathes all things early Land-Rover. He owns 10 of them including the bare chassis that he’s driving today. “By this time next year I’ll have the body back on it” he says “but Land-Rover wanted to show it as it is and even transported it down here for me, so I was happy to oblige. They take about 1000 hours each, give-or-take to fully restore” Tom’s attention to detail is mind-blowing. 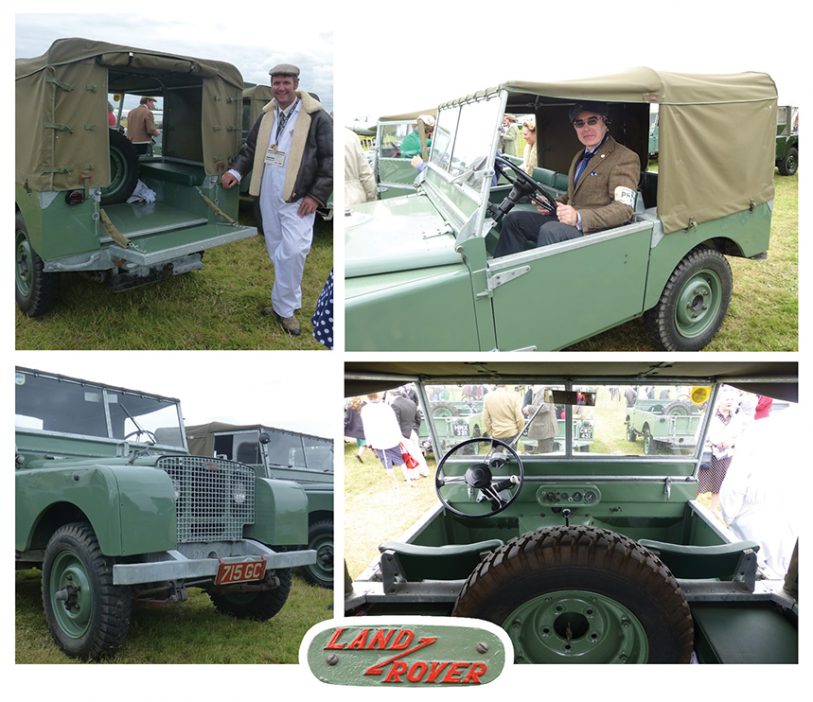 Thankfully our car is fully covered. It is chassis No 9, one of 20 pre-production Land-Rovers still in existence today, and one of nine gathered here today to take part in the parade. Never before have so many pre-prods, as they’re affectionately referred to by those in the know, been gathered together – not even in the factory. Built in 1948 (coincidentally the same year as racing started at Good-wood) like all pre-prods it consists of a Birmabright aluminium body sitting on a galvanised steel chassis and is finished in the same shade of green as the War Office used to paint the inside of aircraft fuselages (both Birma-bright and said hue were in surplus after the war, steel on the other hand was in short supply).

Fitted with the same 1,600cc engine and gearbox as that fitted to Rover’s P3 Saloon car it was originally supplied to the Ministry of Supplies for demonstration and test purposes. Obviously it impressed. The Ministry of Supplies went on to become Land-Rover’s biggest customer. I slide in to No 9’s simple passenger seat and Rebecca sits sideways in the back under the canvas hood and readies her camera. Our Dutch driver whose name now escapes me (I’m very, very sorry!) presses the starter and like the other 51 cars around us the little 80 inch Landy bursts into life. Vibrations come through every surface, there are no carpets, no sound insulation, and virtually no dashboard either.

There’s also no synchro-mesh on 1st and 2nd gears so for once I’m glad I’m not behind the Bakelite wheel, my double-declutch skills aren’t what they were. I am on the right though as No9 is a left-hand drive, I’m sitting on the petrol tank in fact, and in the video I later post on Twitter it looks (to the British at least) like I’m driving. 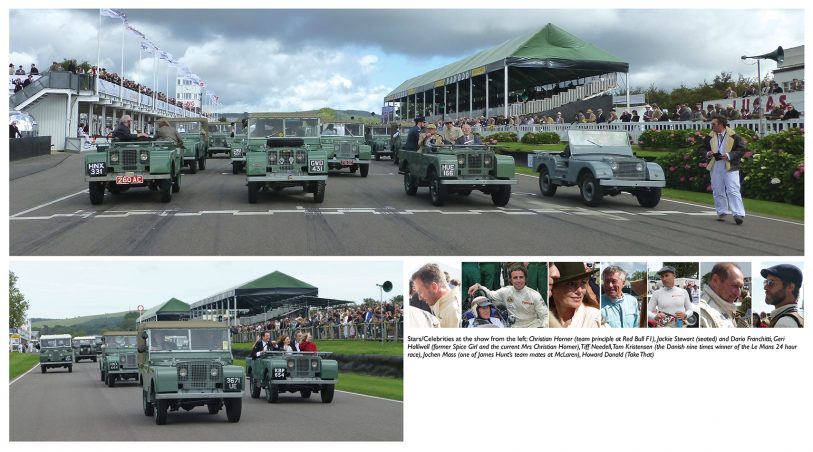 At 11:20am precisely we start to make our way out on to Goodwood’s hallowed tarmac. The prototype centre-steer car, the one Land-Rover designer Maurice Wilks drew in the sand at Red Wharf Bay, leads us out. It’s followed by HUE166 chassis No1 and then Chassis No3, the original Amsterdam Motorshow car with the rest of us taking up our positions in a rolling grid formation behind.

As we exit Woodcote corner I turn up the commentary on my ear-piece radio and savour the moment as our procession of what I’ve just heard being called Mobile Meccano Kits makes its way past the Goodwood pits before pausing on the starting grid so everyone, including us, can get their photos.

The Marshall’s whistle blows and we’re on our way, towards Magwick, through Fordwater, on to St Mary’s and then into Lavant: 2.4 miles, a full lap of Goodwood and most likely the slowest one of the whole Revival weekend. When we reach the parc ferme again my grin is as big as it’s ever been. By 11:30 we’re done, but we’ll never forget today.

Later I reflect on my own time spent with Land-Rovers. I’ve worked on them and I’ve worked in them. I’ve eaten my dinner in them and I’ve been to dinner in them. I learned to tow a trailer with one, and I learned to drive in one, long before I turned 17. I’ve even done a lap of Goodwood in one. They have been around me, and me around them, for longer then I care to remember.

Soon, although no-one’s quite sure when, production is going to stop.

Farewell Defender my old friend. Today of all days it’s been emotional.