A BRIT LOST IN NEW YORK

A kaleidoscope of neon lights greets me as I step out of the iconic yellow cab and onto the buzzing streets of Manhattan. As I look up, the hypnotising spectacle of colour, glowing like the Northern Lights against the imposing skyscrapers, means I pay no attention to the tumult of people who walk past me with equal indifference to my presence.

It’s 10pm and the September air in New York is unseasonably warm. As each step pulls me closer into this captivating city, I remember why I decided to visit for a second time. Author Thomas Wolfe once said: “One belongs to New York instantly; one belongs to it as much in five minutes as in five years.” Just look around to see what this mesmerising metropolis has to offer and you can’t help but agree with the sentiment.

Despite popular belief, it is not essential to have lived in a city for it to entice you, and New York is a prime example of this. Perhaps this feeling is due to its deeply ingrained culture of acceptance that coincides with its history of immigration; Ellis Island, located in Upper New York Bay, was the official gateway to America for immigrant inspection and examination between 1892 and 1954. With this in mind, it is not surprising that one would feel at home in a place where everybody is, essentially, away from home.

As you can imagine, New York City is bursting with a plethora of sights, museums, restaurants, and activities. So on the following pages is an itinerary of my last day that defines making the most of every minute in the city that never sleeps.

8am. Walk over Brooklyn Bridge

After having a decent night’s sleep, I decided to step on the sidewalk (that’s pavement to you and me) and see what this concrete jungle had waiting for me.

My first port of call for the day was to cross the Brooklyn Bridge. As I emerged from the subway station in Brooklyn the steel-wire suspension bridge, adorned with the American flag, was immediately in sight. Completed in 1883, a walk along the promenade of this bridge was, and still is, a popular past time. The reason? Each step across this iconic construction offers you the most spectacular views of Manhattan Island and the Statue of Liberty. In a city where crowds are commonplace, having the opportunity to see this uninterrupted view of the cityscape along this promenade is simply invaluable. 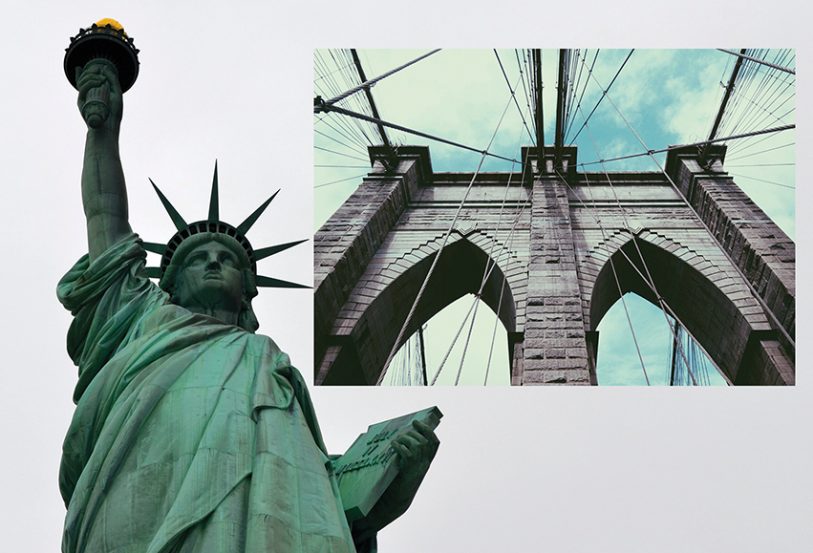 Commissioned in 1853, Central Park is the first landscaped public park to be constructed in the US and now draws around 35 million visitors every year. Central Park is a welcomed sanctuary for those who want to escape the hustle and bustle of the surrounding city. As you delve deeper into this green bubble, the sounds of the outside world disappear and the grey architecture is replaced by open green spaces, making you forget (even for a moment) that you are in the centre of one of the world’s busiest urban areas. Larger than the Principality of Monaco, the park is home to a zoo, athletic fields, gardens, woods and 9,000 wooden benches – so plenty of much-needed pit-stop opportunities.

From one extreme to an-other, I took a taxi south to what is perhaps New York’s most famous, and nosiest, landmark – Times Square. Described as a modern-day agora, this dizzying agglomeration of electric, neon, and illuminated advertisements will have you spellbound on your first visit.

As the taxi jerked its way through the commotion of this major intersection, it was both fascinating and distressing to observe the swathes of pedicabs, trucks and cars all competing for road position where there was none to be seen. Once I was out of the taxi, the lights of Times Square almost had a magnetic pull. It is this part of the city that makes you feel the smallest, the towering buildings and electric billboards encroaching further upon your personal space.

In 1904, Times Square received its name when The New York Times moved its oper-ations to a 42nd Street skyscraper. The first electric advertisement also made its appearance later that year. According to Business Insider, the cost to rent a billboard here for a year is between £700,000 and £2.5 million. Doesn’t seem like a bad deal considering over 360,000 people visit this landmark daily.

If it has not already, New York will win you over when arriving at this quintessential part of the city. As it stirs you with its pulsating lights and infectious energy, you come to realise that Times Square’s primary attraction is its unofficial status as a microcosm for America’s modern melting pot: crowds of people from different back-grounds instantaneously surround you as you enter this chaotic world. For some this situation is perhaps a little daunting but, for others like me, it’s the perfect opportunity for people watching.

Being British, I’m used to the obligatory queue for just about anything these days. It’s simply one of life’s annoying certainties: like that colleague at work who only talks to complain about the “miserable weather we’re having”, or getting obsessed with all things cake when The Great British Bake Off makes its annual return to our screens. But when you have to queue for a new and exclusive restaurant that refuses to take bookings, that’s a different type of expectation altogether. It may be the sleekest Japanese place you’ll ever visit, but when you’re spending a cold Thursday evening queuing in the rain for hours, somehow that salmon sashimi dish doesn’t seem so appealing anymore.

Luckily, Flex Mussels isn’t one of these restaurants. With two establishments covering Uptown and Downtown New York, Flex Mussels is more than just a clever play on words: this is a restaurant that has mastered the art of cooking seafood. With 24 different varieties on the menu, you can choose between the Thai mussels with a coconut curry broth, the Bombay curry which features garlic, cinnamon, star anise, and white wine, the Bruschetta which includes San Marzano tomatoes, lobster, marinated tomatoes and crunchy croutons, and many more dishes to whet your appetite.

Despite its pretentious interior of connecting semi-underground rooms and minimalist décor, the food is far from lacking substance. Flex Mussels proves that the US has come a long way from their embarrassing culinary past, when Europeans ridiculed their love of anything deep-fried, breaded and smothered in butter.

Situated in Nolita (“North of Little Italy”), the Little Cupcake Bakeshop is a Mecca for sweet lovers. Before visiting here, I had never indulged in a bake that I had thought was near perfection. However, the sugary delights from this place are so incredible, just the wafts of cake mix and frosting alone will carry you to the store.

Using fresh, sustainable ingredients that are locally sourced, the Little Cupcake Bake-shop is not your average bakery; they offer unusual and unique flavours like blue velvet (made with blueberries) and the Dreaming Princess – an almond cake with raspberry preserves, topped with almond buttercream. In all fairness, any dessert named the “Dreaming Princess” is worth trying purely on that basis.

To complete the evening, I chose the Cookies and Cream cheesecake. Each element of this cake worked harmoniously together and represented everything you would want in a cheesecake: the crumbly texture of the cookie base married perfectly with the light, airy sweetness of the cream, without that stodgy feeling most cheesecakes tend to have in excess.

While the Little Cupcake Bakeshop may be full to the brim with people most of the time, this only serves to demonstrate the high-quality products: their desserts are well constructed and thought-out, combining inventiveness with flavourful treats.

A sense of melancholy hung over me as my time in New York came to an end. With its evocative landscape and romantic sensibility, it’s no wonder New York has, today, become a leading centre of artistic and social development. The fast-paced nature of this city may send you in a state of confusion momentarily but, eventually, both its charm and seductiveness will pull you in time and time again.