LAST MONTH I TOOK ADVANTAGE OF THE LATE SUMMER SUNSHINE, AND HEADED SOUTH TO CORNWALL TO SPEND SOME TIME WITH FAMILY AND FRIENDS 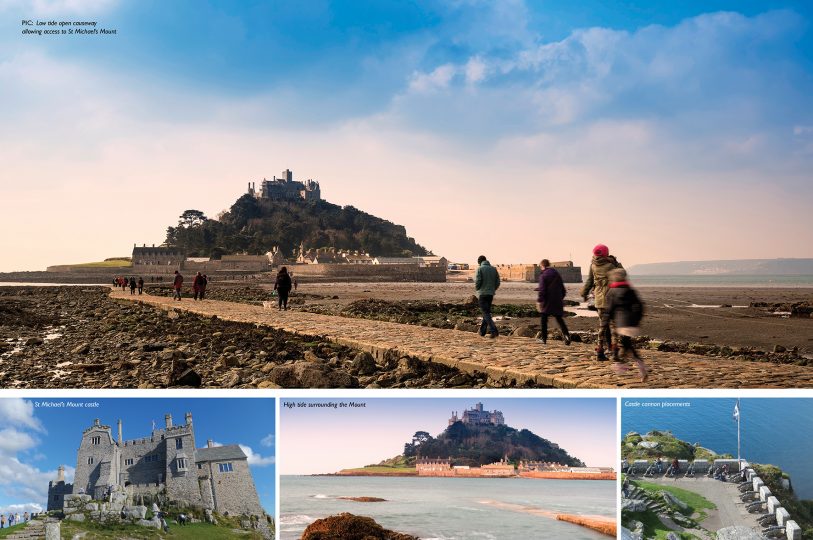 It takes only 3.5 hours to drive from Swansea to Newquay in Cornwall, so this is where we chose to base ourselves for a short autumn break. Newquay isn’t my idea of a Cornish idyll as it is far too commercialised, but it made an ideal location for getting around the area. An old friend who had settled there after retirement summed it up when he said “nowhere is very far in Cornwall” and he’s absolutely right. With the A30 running down its centre and the fact that it is only about 30 miles wide, getting around is very easy.

There are 43 islands in the UK that are accessible on foot at low tide according to Wikipedia, one that I have been to in Swansea, Worm’s Head and another on my bucket list Burry Holm. St Michael’s Mount is just off the coast at Marizion and is almost identical in its conical shape to Mont Saint Michel in Normandy. There’s something rather romantic about approaching an island via an ancient causeway. Once on the island, there is only one way to get to the castle at the top whether you are royalty or a peasant, and that is by walking up – but the views from the top, make the effort very worthwhile. There is an underground railway that is used to transport goods up and down the hill but Health & Safety have deemed it far too dangerous for live cargo. 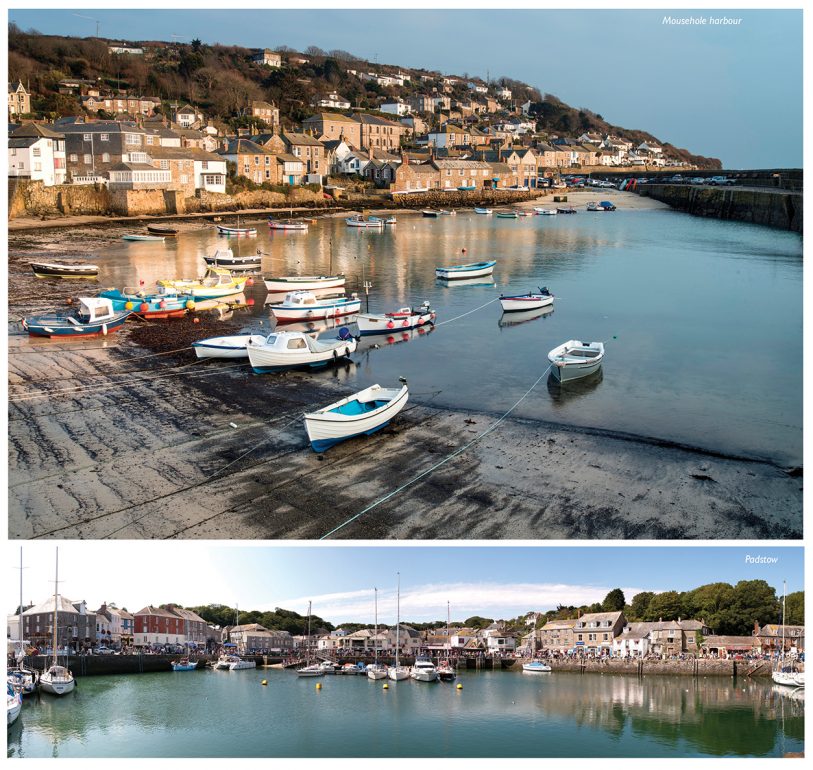 A little further around the coast is the fishing village of Mousehole so named because the space between the two piers that lead into the harbour is as small as a mousehole, but don’t make the mistake of pronouncing it like a rodent’s doorway – it’s Mowzel.

Dylan Thomas described Mousehole as the loveliest village in the UK when he spent his honeymoon there in 1937. It’s said that the village was the inspiration for Llareggub in Under Milk Wood.

The day before Christmas Eve is known as Tom Bawcock’s Eve, and is marked by a lantern walk around the harbour. Tom was a local hero who saved the village from famine by braving the stormy seas to bring back fish for the starving villagers. Stargazy Pie, a pastry topped dish of fish, egg and potato with fish heads poking out of the crust is traditionally eaten to commemorate the brave fisherman.

There was no fishy pie on offer, but I did find a rather gorgeous local ice-cream made with clotted cream and blackcurrants which kept me quiet for a while. Of course no visit to Cornwall is complete without a pasty, or as they are also known locally – an oggy. In fact I learnt that the sporting chant of “oggy oggy oggy” comes from Cornish tin miners’ wives calling out to their hungry husbands and “oi oi oi” their response. There are so many pasty shops – all claiming to be the best – but I’m afraid that a good old Swansea corned beef pasty will always be my favourite.

The Cornish coastline is very beautiful with its little fishing villages and dramatic cliff tops. A trip to Godrevy Point to do some seal spotting was rewarding, with about 30 seals and their pups sunning themselves on the rocks. From this point it is possible to see dolphins, porpoises and basking sharks but not when we were there – another time maybe.

Just a little north of Newquay is the village of Padstow or Padstein as it is sometimes referred to, due to the apparent saturation of business premises owned by celebrity chef Rick Stein. I have previously visited the village to attend a fish cookery course at his school – and I proud to say that I am still confident at filleting a fish. I had heard that his fish and chip shop was a treat not to be missed and I confess that the chips cooked in beef dripping were probably the best that I have ever tasted – golden and crispy on the outside and soft and fluffy on the inside – the perfect combination. Perhaps the location had something to do with it, as sitting in the sunshine on a harbour wall is pretty special.

Now that I know we can drive there in such a short time, it won’t be long before we go back.