On the 15th March this year a team of fifteen air cadets and staff from 1998 West Cross Squadron, Swansea, Royal Air Force Cadets embarked on a 9 day expedition to Kiruna in the north of Sweden, deep in the Arctic Circle wilderness. After almost two years of fund raising and anticipation they were finally on their way to Stockholm the capital city of Sweden. Warrant Officer William Roberts gives us his account of this exciting expedition

From Stockholm we were due to catch the night train all the way to the North of Sweden, a distance of 1450km (950 miles) which was an experience in itself; once settled into our cosy 6 man sleeping berths we began our 17 hour journey to Kiruna.

Arriving in Kiruna later the following morning, we were greeted at the platform by our expedition guides, along with more snow than most of us had ever seen! We travelled along the icy roads into the beautiful forestry of Sweden, arriving at our tour guides camp. Our expedition was planned to be seven days of dog sledging around the Arctic Circle. It was made clear to us when we arrived that it would have been difficult as the dogs on the camp were ill with a canine flu epidemic and that their work time was limited by the local vets. Despite this, our team leader Christian Wilkins along with our tour guide said they would still get some sledging done along with various arctic survival skills that would be taught in the remote wilderness.

Meeting our tour guide Marcus and his team was our first contact with the Swedish people; he gave us a full briefing and itinerary as to his expectations for the week; we were also kitted out with thermal coveralls, lined artic boots and thick mittens to combat the -15 deg C temperatures before we moved into our base camp the next morning.

The next morning we travelled even further north. We had to leave our mini buses and carry our kit a few kilometres through the snow into our basic campsite; this was our home for the next 7 days. 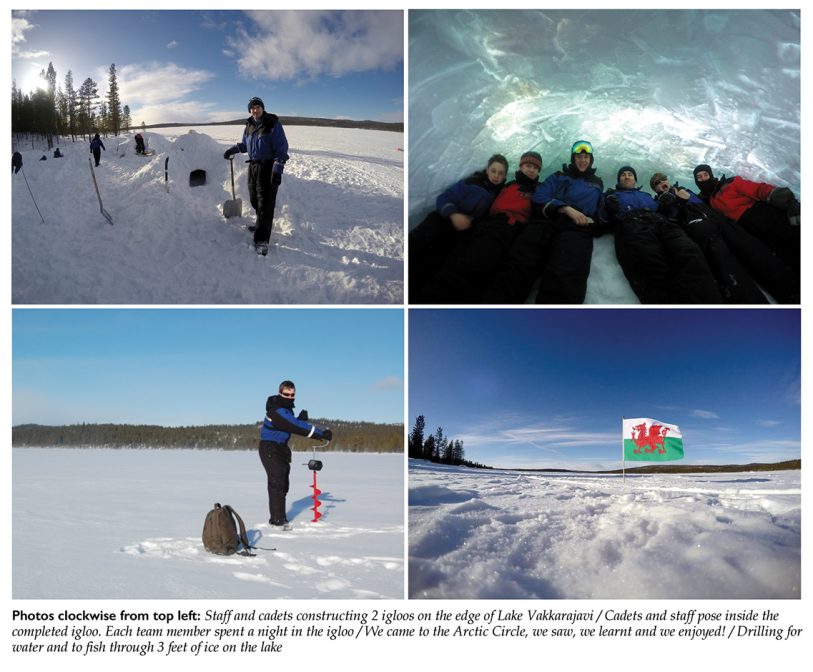 With no heating, electricity or running water we had to provide for ourselves. We had to dig out a fire pit and use the snow to make a wind break and were instructed how to gather materials around the campsite. Being self sufficient was one of the great experience of our expedition as we really were in the middle of nowhere, gathering our water and ice fishing from a hole in the nearby frozen lake which required the use of 1 metre long 5 inch diameter drill to bore through the ice. Wood had to be gathered and chopped to supply the main cooking fire, as all meals would be taken ‘al fresco’ out in the open, any temperature, snowing or not!

After we were settled into our camp we began to learn from our guide Marcus a series of survival techniques in the arctic wilderness. Staying in the camp that Ray Mears himself trained in, we learned about the different way to make shelters and the right trees to use for firewood. One of the main activities was build-ing igloos to live in. We split into two teams and started building up igloos to fit about 7 to 8 persons in each. We left the igloos over night to freeze, dug them out from the inside and took turns in sleeping in them throughout the week. That was one of the best experiences some of the team said they’ll bring back, sleeping in an igloo on a frozen lake with the spec-tacular Aurora Borealis (northern lights) overhead almost every night.

Other activities we did included orienteering through the thick snow (3 feet deep) using snow shoes which we found very physically demanding; Marcus also showed us how to make our own snow shoes with sticks and twine. Another enjoyable but physical activity was a 12 km navex cross-country expedition, skiing over and around lakes Väkkäräjävi and Piettarasjärvi. We sustained a lot of bumps and bruises while getting used to the thin skis used for long trecks on irregular ground.

In summary, a truly wonderful 9 day experience where all cadets and staff combined as a team, wherein every-one was pushed to their limits, learning new skills in a demanding and unforgiving but beautiful environment that is potentially one of the last unspoilt wildernesses in Northern Europe.