CHARLES IS A RESEARCHER AND FAMILY HISTORIAN. DO GET IN TOUCH IF YOU NEED HELP IN FINDING OUT MORE ABOUT YOUR ANCESTORY.

In my previous article I wrote about military records and what information could be obtained from them. 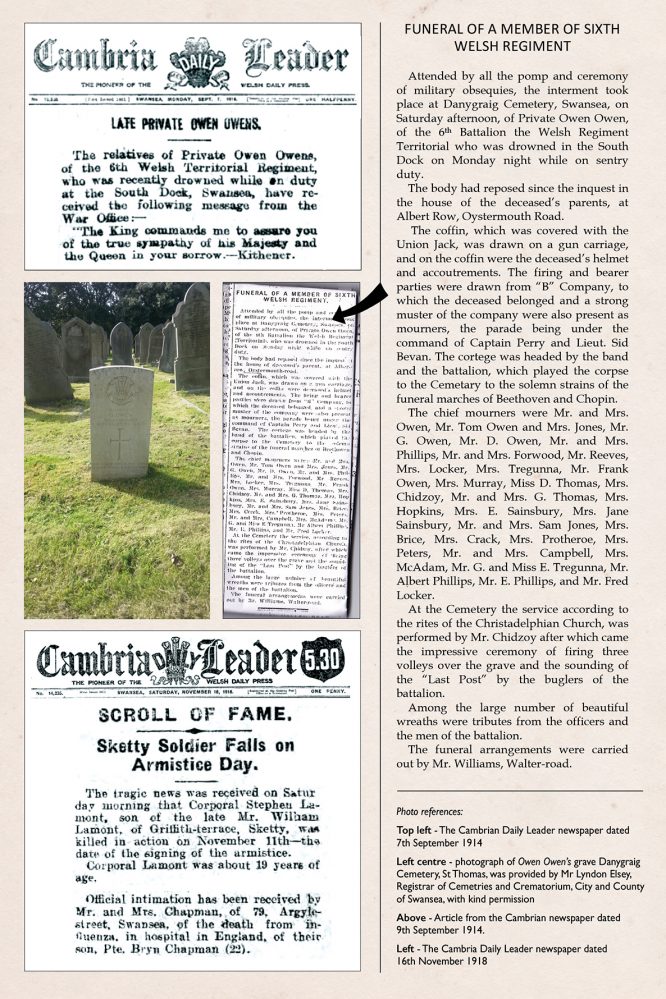 In this month’s article, I am writing about what information can be found from the various cemeteries and memorials where ‘our’ soldiers are buried and commemorated.

The last of the Swansea men to have been killed during the conflict of the First World War, was Corporal Stephen Lamont, from Sketty, who was killed on 11th November 1918, Armistice Day.

Private Bryn Chapman, of Argyle Street, had died of influenza in England as reported by the Cambria Daily Leader. The influenza epidemic known as the Spanish Flu started during 1918 in the trenches of the Western Front, and it is estimated that 10,000 people from Wales succumbed to the disease. It would be interesting to find out how many people from Swansea died.

Even though newspapers provide us with interesting information with the events of the day, we do have to take some care as to whether that said information is ‘correct’. This is illustrated in the article printed in The Cambria Daily Leader, dated 16th November 1918.

Further research on the Commonwealth War Grave Commission website, www.cwgc.org on Stephen Lamont, states that he was actually killed on the 4th November 1918 and he served with 2nd Battalion, Manchester Regiment, and he is buried at Ors Communal Cemetery, France.  Did his parents receive the news of his death on the 11th, as did those of Wilfred Owen, war poet, who is also buried in the same cemetery? Of Bryn Chapman, there is a Brinley Archibald Richard Chapman found on the website who died on the 15th November 1918 and is buried at Bethel Welsh Congregational Chapelyard, Sketty. Before the war Brinley’s occupation was a Copper Worker. After a bit of research into his death, I was able to find out that he died at Military Hospital, Rugeley Camp, Staffordshire which was built in 1916, containing 12 wards and over a 1000 beds. It was unusual during this time for a body to be repatriated home.

The Napoleonic War was the major conflict, concluding at the battle of Waterloo, 1815, 99 years previous to the start of the First World War. Those who served with the British Army at that time and died in action would have been buried in a communal pit. The First World War was the first of its kind in remembering serving men who had died on active service, with the creation of the Imperial War Grave Commission, 1917, the founder being Fabian Ware. The commission changed its name to Commonwealth War Grave Commission during the 1960s. The purpose of the Commission is set out in their mission statement:-

“To pay tribute to the personnel of the Commonwealth forces who died in the two world wars.  Also maintains a roll of honour for civilians killed in the Second World War” 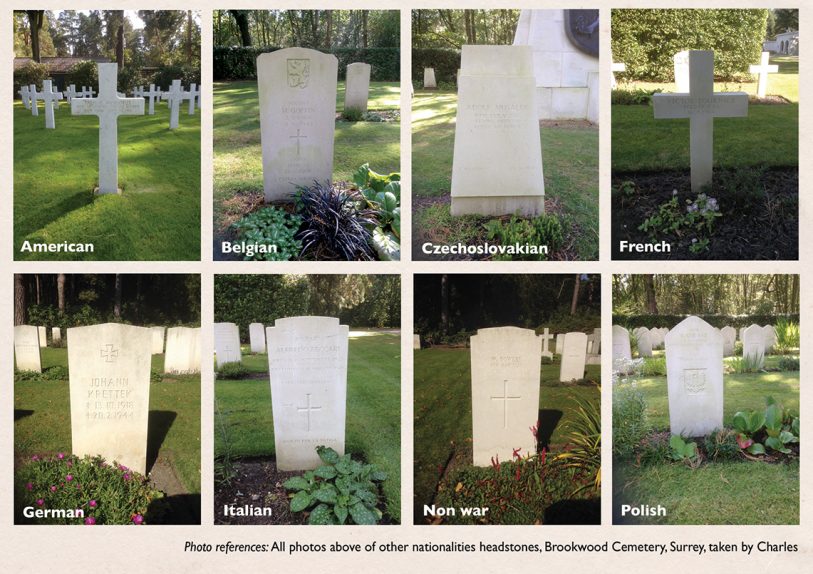 What information can be obtained from a military headstone?

The majority of the headstones are made of Portland Stone, in some cases a stone of marble effect. They are 76 cm high, 38 cm wide and depth 7.6 cm. On the face it contains the national emblem or regimental badge, rank, name, unit, date of death and age. At the foot of the stone is a more personal dedication chosen by relatives. For those who were unidentified their gravestone bore the inscription Known unto God, words by Rudyard Kipling.

Whilst at Brookwood Cemetery, I was informed by the gardeners of the different Remembrance Services from the various countries, taking place during November. 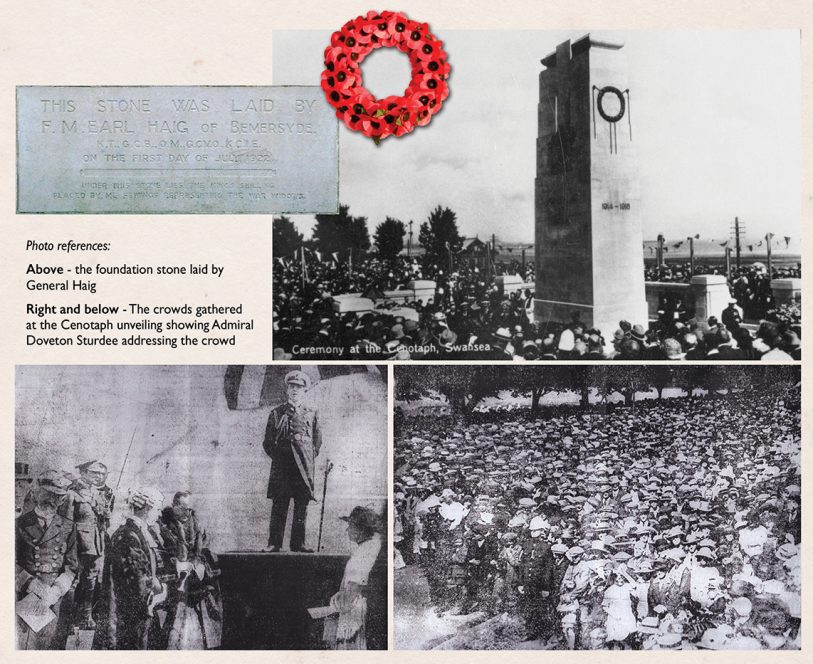 So what other sort of Remembrance is there?

There are 125 memorial plaques and dedications in churches and buildings around Swansea. The main memorial being Swansea Cenotaph designed by architect Ernest E. Morgan and located on Mumbles Road. The Foundation Stone was laid on 1st July 1922 by General Haig; with the dedication and unveiling on 21st July 1923.