Fundraisers step up a gear for Felix 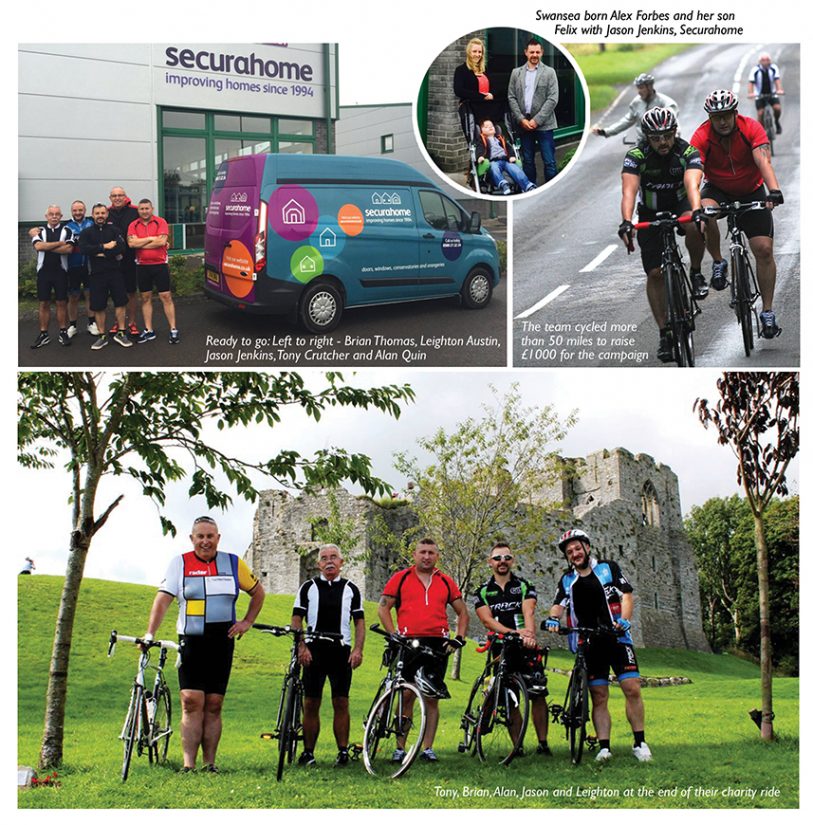 Five months after a skydive that attracted £5,000 for the Go Felix campaign, staff from Swansea fenestration Securahome jumped into the saddle to raise a further £1,000 for the fund.

The money will go towards therapy and equipment for three-year-old Felix Forbes who has a rare condition called Lissencephaly and Miller-Dieker Syndrome.

The life-limiting condition means Felix, whose family are from Swansea, has difficulty swallowing food and even holding up his head.

MD of Gorseinon-based Securahome Jason Jenkins, 45, said: “At the start of the year we asked people, through social media, for suggestions of local charities that needed our support. The Go Felix campaign was the cause that had the most nominations.

“Having met the Forbes family, we knew we had to help in any way we could.”

The Securahome team rode 50 miles earlier this month to raise the sponsorship money, starting at Dryslwyn Castle be-fore moving on to Kidwelly, Loughor and finishing in Oystermouth.

While they were raising money, the team collectively lost pounds in a different way – 140 to be exact, the equivalent of 10 stones in weight, thanks to an intensive training schedule in preparation for the 50-mile ride.

“The team put in hours of training to be fit enough to take on the ride,” Jason said. “Our design consultant Leighton lost four stones, while marketing contractor Tony lost five and a half stones. Along with raising money it’s been a tremendous boost for their health.”

Felix’s mother Alex said that the money raised would make a real difference to Felix. She said: “I want to say thank you to everyone who donated money, I’m speechless that so many people could be so kind.

“We need lots of sensory equipment to help Felix achieve his potential and donations like these help him move closer to that goal.”

Felix’s condition means that he is not expected to survive beyond childhood and his parents hope to raise £50,000 to pay for specialist equipment and therapy sessions.

For more information on the Go Felix campaign go to: www.treeofhope.org.uk/go-felix