Resident BAY walker John Ashley was lucky enough to receive a birthday gift to fly over Gower with Gower Flight Centre based at Fairwood Airport. The weather was fabulous and he had a flight to remember Gower Flight 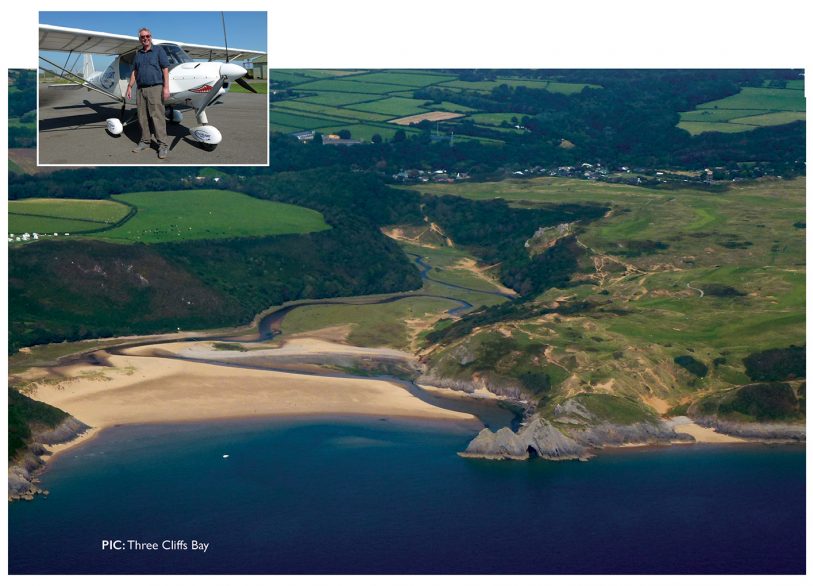 As we were leaving Swansea Airport’s airspace the huge RAF transport air-craft made a run down the runway before roaring off to its next way-point. Our Ikarus C42 microlight with wings removed would fit comfortably inside the Hercules’ cavernous fuselage. But that would spoil the view, so back to our little two-seater and a flight over Gower.

My birthday flight with Gower Flight Centre had been postponed several times because of bad weather. Once we actually got off the ground but returned when the cloud base headed earthward.

Today the sky was clear, the wind moderate from the west, and visibility good. How far could we go in half an hour? At 90 knots, quite a long way.

Matthew the pilot – like policemen, pilots get young-er all the time – had filled the tank from a can and showed me how to back into the cockpit and strap in. He gave a running commentary as he flicked switches and spoke to the tower, then there was a roar as the propeller started turning. All conversation until the engine stops is carried out though headphones.

The Ikarus is a side-by-side two seater, with excellent views through the very large windows. The kick when Matthew accelerated down the runway was substantial, belying the delicate appearance of the aircraft. The nose wheel lifted as we “… slipped the surly bonds of Earth, And danced the skies on laughter-silvered wings.” John Gillespie Magee was a Spitfire pilot and knew what he was versifying about in High Flight. 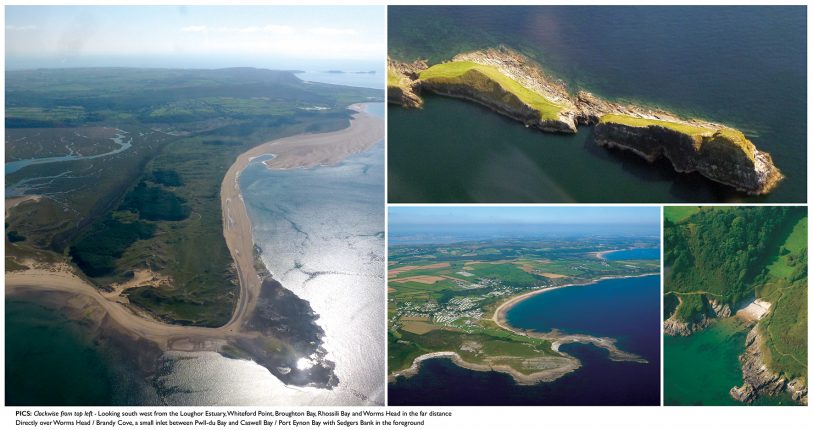 Gower Flight will take you anywhere within reason, including your house if you want to inspect the gutters. We stayed over Gower. I must have covered nearly every inch of the peninsula on foot over the years. Now I wanted to fly over the familiar coast paths.

We headed north to the Loughor estuary at 3,000 feet. It was a bit bumpy in places but once we were over the sea everything calmed down. As the aircraft banked gently through the turns the big windows came into their own, the view apparently straight down.

The photos speak for themselves. We flew anti-clockwise round Gower, from the Loughor to Whitford lighthouse and Broughton Bay, Burry Holms, Rhossili, Worm’s Head, past Paviland to Port Eynon Bay, and on to Oxwich. Here we banked to look for shipwrecks, but they were lurking in the shadows today.

After Oxwich Bay and Pwll Du it was time to go home. As we lost altitude I picked out paths through the countryside that the Ikarus covered in seconds. There are no stiles up here. We seemed to float along the runway for ever until the wheels touched. Brake, and taxi back to the Gower Flight Centre base. Flick more switches and silence.

Many thanks to Matthew and Gower Flight Centre for such a memorable experience. Christmas is coming up – you know what to ask for.

“Oh! I have slipped the surly bonds of Earth
And danced the skies on laughter-silvered wings;
Sunward I’ve climbed, and joined the tumbling mirth
of sun-split clouds, — and done a hundred things
You have not dreamed of — wheeled and soared and swung
High in the sunlit silence. Hov’ring there,
I’ve chased the shouting wind along, and flung
My eager craft through footless halls of air….

Up, up the long, delirious, burning blue
I’ve topped the wind-swept heights with easy grace.
Where never lark, or even eagle flew —
And, while with silent, lifting mind I’ve trod
The high untrespassed sanctity of space,
– Put out my hand, and touched the face of God.”