From Pushkin Press, well-known for its superb stable of translations of the finest internationally renowned authors, comes a selection of irresistible children’s books this Christmas, ideal for the kids to curl up with and equally suitable for reading out aloud.

Translated from the French by Sophie Lewis (Pushkin Children’s Books £7.99)

Translated from the Russian by Jane Bugaeva (Pushkin Children’s Books £12.00)

The Secrets of the Wild Wood

Translated from the Dutch by Laura Watkinson (Pushkin Children’s Books £16.99)

Meet at the Ark at Eight! by Ulrich Hub

Translated from the German by Anthea Bell (Pushkin Children’s Books £7.99) 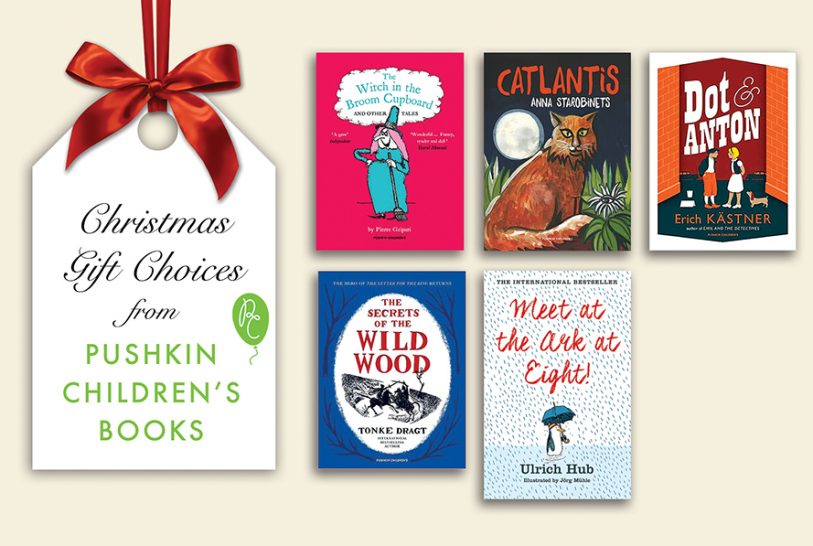 As crowd-funding proliferates, taking on the role of an ultra-modern source of funding for book publishers, let us remember that the earliest days of book sales dating from the seventeenth century were funded by reader subscriptions. Many works of non-fiction such as atlases, dictionaries and religious tracts as well as eminent works of literature, including John Milton’s Paradise Lost, were financed by hundreds of subscrip-tions from prominent citizens whose names were listed in the book.

The practice of combining the roles of publisher and salesman as we know it today, replaced subscription funding in the 19th century. While crowd-funded titles are yet to occupy centre space in the publishing industry, there has been a revival of subscription publishing, most notably by UK publisher & Other Stories, using a system of obtaining orders

(and sometimes payment) in advance to enable publication of a book.

& Other Stories is a social enterprise, and all profits are reinvested in the company. What is impressive is the very high quality of their out-put, described as ‘shamelessly literary’. The titles published by & Other Stories appear regularly on shortlists of every literary prize awarded in the English language.

Just take a look at the literary tour de force that is The Restless Supermarket – and this is but one novel from their glittering array of brilliant writers. The quality of their titles has been rewarded by significant Arts Council grants, which facilitate the growth, nurture, and development of future literary luminaries. 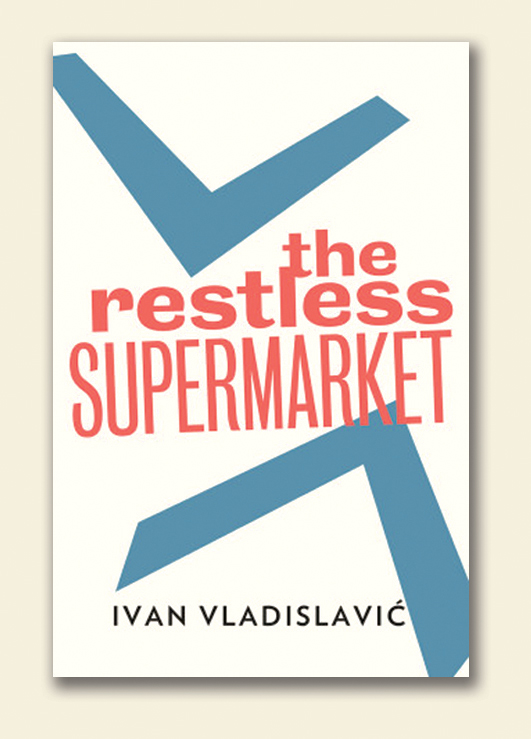 The Restless Supermarket and all the other shops and commercial establishments in downtown Johannesburg are the setting for an effervescent, ironic, and immensely funny novel that looks at the oddities of the denizens of the Hillbrow neighbourhood.

Our hero, retired white proofreader Aubrey Tearle is obsessed with words and their use and misuse and makes his plaint, begging for the correct usage of the English language, in vain to the multi-race, multi-glot group of misfits who frequent his favourite haunt, the Café Europa.

Tearle seeks refuge in examining the details of the lurid mural on the café wall depicting the town of Alibia — to the extent that, as his real world collapses around him and his familiar old South Africa disintegrates into a maelstrom of surging post-apartheid humanity, he seeks refuge in the fake world of Alibia, moving the scene of the action to the painted illusion of a fake town.

The Restless Supermarket’s multi award winning author Ivan Vladislavic has produced an astonishing novel that leaves you gasping at his daring shifts in plot, his unforgettable, irascible hero and his portrayal of a host of alarming characters, all regulars at the Café Europa.

Aubrey Tearle’s plan to initiate a “Proof-Readers Derby” with a trophy is as bizarre as the opening paragraph of the novel which involves a drunken salesmen publicly violating the modesty of a fibreglass elephant outside the Jumbo Liquor Market.

This unexpected combination of the hilarious, the disastrous and the poignant elevate The Restless Supermarket to the echelons of the finest novels that have immortalised a city.

Log in to www.andotherstories.org for more information on subscription titles if your curiosity has been piqued.

We are fortunate that a host of literary heavyweights have made it to the bookshops, published in time for Christmas reading and gift giving.

by Dario Fo Translated from the Italian by Antony Shuggar (Europa Editions £10.99)

It is seemly that we start with Nobel Laureate Dario Fo, the multi-faceted Italian poet, playwright, director, actor, comedian, and political campaigner who has straddled the world literary stage since 1958.

The Pope’s Daughter is his first novel, his own interpretation of the miasma surrounding Lucrezia Borgia, one of the most vilified women in modern history, daughter of Rodrigo Borgia, Pope Alexander VI.

Contemporary British interest in the scandalous doings of the notorious Borgia family resulted in an excellent TV series called simply ‘The Borgias.’ But as early as the 17th century Elizabethan playwright John Ford wrote a play about Lucrezia ‘Tis a Pity She’s a Whore which is still performed. The interest in the Borgias has never waned.

The Pope’s Daughter is by no means another pointless historical novel;

Dario Fo’s famous sense of comedy would never permit such pedestrian dullness. His tongue in cheek ‘Preamble’ to the novel is one of the most comic introductions I have ever read, full of wry and sly allusions to the salacious social setting of Renaissance Rome and the Vatican.

History portrays Lucrezia as an incestuous nymphet playing her role in the murderous machinations of her brutal brother Cesare. Nonetheless she must have had some redeeming qualities for Pope Alexander VI made her his Papal Vicar putting her in charge of the affairs of the Vatican in his absence; she also took care of affairs of state when her husband Alfonso d’Este of Ferrara was away.

Historical fact, Fo’s fiction and the limits of the reader’s credibilty merge to provide a brand new positive portrait of La Borgia. Dario Fo uses a combination of fact and fiction to present Lucrezia in a more favourable light, as a competent regent and a compassionate benefactress. How far this portrayal is to given credence is not of major significance, because Fo has created a new Lucrezia who takes on her redrawn character with wonderful aplomb.

Indisputably one of the greatest living writers in English, Bombay-born Sir Salman Rushdie is equally well-known as the victim of a fanatical Iranian ‘fatwa,’ a death sentence which kept him under close British police protection for many years. His recently televised novel “Midnight’s Children” won him the distinction of ‘The Booker of Bookers’ award, as the best novel internationally to win the Man Booker Literary Prize.

Sir Salman Rushdie is the master of magical realism which he uses as a literary tool to engage with global conundrums of the relationship between humanity and its environment, mental and physical.

Two Years Three Months & Twenty-Eight Nights makes up in fact exactly 1001 nights, referring to the famous Arabian Nights stories told by the princess Scheherezade to keep her Caliph husband from killing her. Rushdie tells the story of the wars of the jinns, the vicious Middle Eastern demons, and its devastating effects on mortals on Earth. Rushdie percieves the acopalypse thus: “…the use of religion as a justification for repression, horror, tyranny, and even barbarism…. led in the end to the terminal disillusion of the human race with the idea of faith.”

Two Years Three Months & Twenty-Eight Nights portrays a fabulous account of the endless strife between good and evil, ignorance and knowledge, incoherence and understanding, control and anarchy—using the world of jinns and fairies, and all their shape-shifting mysteries to bring focus on ‘the great test we face—our world, its ideas, its culture, its knowledge and laws, is under attack.’ I do not intend to labour the point; I leave it to you, my well-informed reader, to draw parallels between Rushdie’s words and the frightful content of daily news bulletins.

Sir Salman conveys his philosophic messages using a host of frenetic characters, each with a specific message to deliver. He casts his narrative net across millennia, touching on Voltaire, Schopenhauer and other great influencers, feeding from mythology from every continent, blithely referring to incidents in world history—and yet drawing this cacophony of ideas and people into a testament to the indefatigabilty of mankind.

Irvine Welsh was the subject of a recent BBC2 Arts night programme where he examined the many aspects of the Scottish Independence campaign. It seemed apposite to bring to you his latest novel published earlier this year.

Since the ‘independence’ referendum and the SNP election success, we hear a great deal more of Scottish accents on the British broadcast media.

I use the TV subtitling service to try and understand at least the gist of what is being said.

Subtitles are unfortunately not available for the written word, and when I picked up the new Irvine Welsh novel A Decent Ride, I hoped in vain that it was, like his last novel The Sex Life of Siamese Twins, written in English, and not in the annoying, frustrating and indecipherable Leith (Edinburgh) dialect he likes to employ in the interests of verisimilitude (cue his novel ‘Trainspotting’).

In A Decent Ride, Welsh has gone for a sort of patchwork of Queen’s English and Scottish dialect and for the first time, I was able to follow the narrative despite skipping large swathes of gibberish. Our protagonist Terry Lawson is an Edinburgh taxi driver who moonlights as a porn actor, delighting in making money out of his favourite pastime. He encounters Ronald Checker, an American TV reality show star who needs help in the pursuit of extremely rare and very expensive Scotch whisky. We meet the hapless Wee Jonty, bullied by all in the tough pubs and streets of Edinburgh, we follow Terry’s enraged search for the identity of his father… I wish I could tell you more. This is a narrative as coarse, bawdy and humorous as any of Welsh’s best novels but I was completely defeated by the incomprehensible language he slips into with greater frequency as the story becomes ever more engrossing.

Whenever I am fortunate enough to understand it, I find Welsh’s writing absolutely wonderful in its huge carica-tures of the rough subculture of metropolitan life and the people and places that define it.

A case of creative coincidence – a photographic likeness

William Boyd, who featured in this column last year, with my review of his novel Solo, is easily one of Britain’s best novelists, towering above his contemporaries with his vigorous plots and compelling prose. His latest offering Sweet Caress, is a fictional biography of a gifted woman photographer Amory Clay. Boyd has used this formula before, notably in his novel Nat Tate: An American Artist 1928-1960 – there are people who still believe that Tate actually existed!

Andrew O’Hagan is an equally distinguished editor, critic and writer: his new novel The Illuminations was longlisted for the 2015 Booker prize, and tells the story of Anne Quirk, a gifted woman photographer.

We meet our respective protagonists in their old age, O’Hagan’s Anne fighting dementia in a care home and Boyd’s Amory suffering physical incapacity in an isolated Scottish cottage.

Both novels are detailed examinations of the descent into old age, as dismaying as they are poetically beautiful. I would not dream of comparing the books: each novel is an outstanding work of literature, a portrayal of the illusory nature of human ambition and achievement.

Both protagonists are strongly etched, both were glamorous figures in their day, Amory Clay known for her photojournalistic dispatches from dangerous war zones, Ann Quirk for her photodocumentaries of modern life. Both books are brilliant additions to the most discerning bookshelf and would make excellent Christmas gifts. 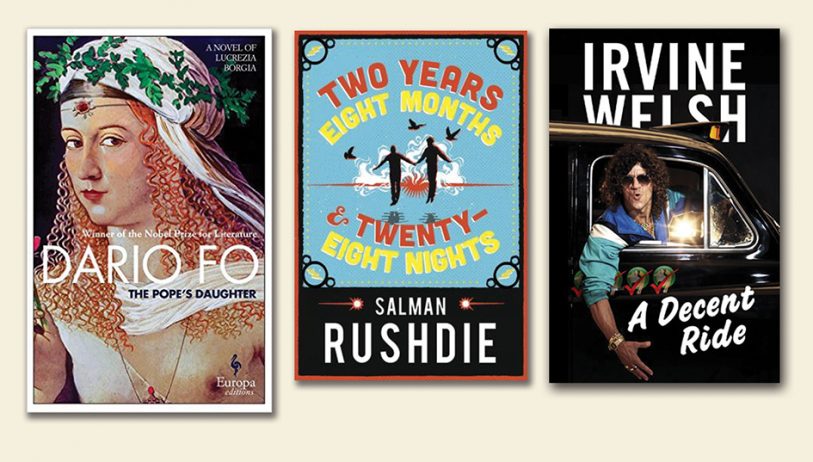