After months of seemingly never-ending darkness, rain and gales, few things are better at lifting the spirits than catching sight of the first butterfly of the year. Many times the source of joy will be a Peacock or Small Tortoiseshell, because these two species often choose to overwinter right on our doorstep in sheds and other outbuildings. However, they are not the only butterflies that will have spent the winter as adults, ready to emerge at the first sign of spring. 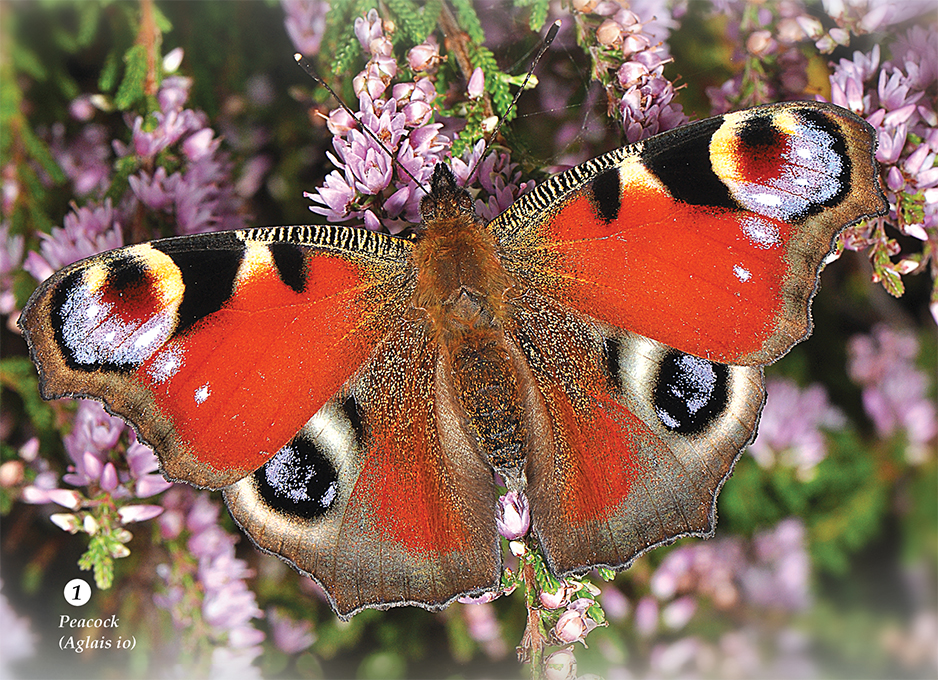 Besides the unmistakeable Peacock (Aglais io) (photo 1) and its smaller relation the Small Tortoiseshell (Aglais urticae) (photo 2), the unusually shaped Comma (Polygonia c-album) (photo 3) and the brightly coloured Brimstone (Gonepteryx rhamni) (photo 4) also overwinter as adults in the UK, and so are often the first butterflies out and about as soon as the spring sun makes its first tentative appearances and temperatures rise a little. In recent years, increasing numbers of the normally migratory Red Admiral (Vanessa atalanta) (photo 5) have also been successfully spending the winter as adults in the UK. 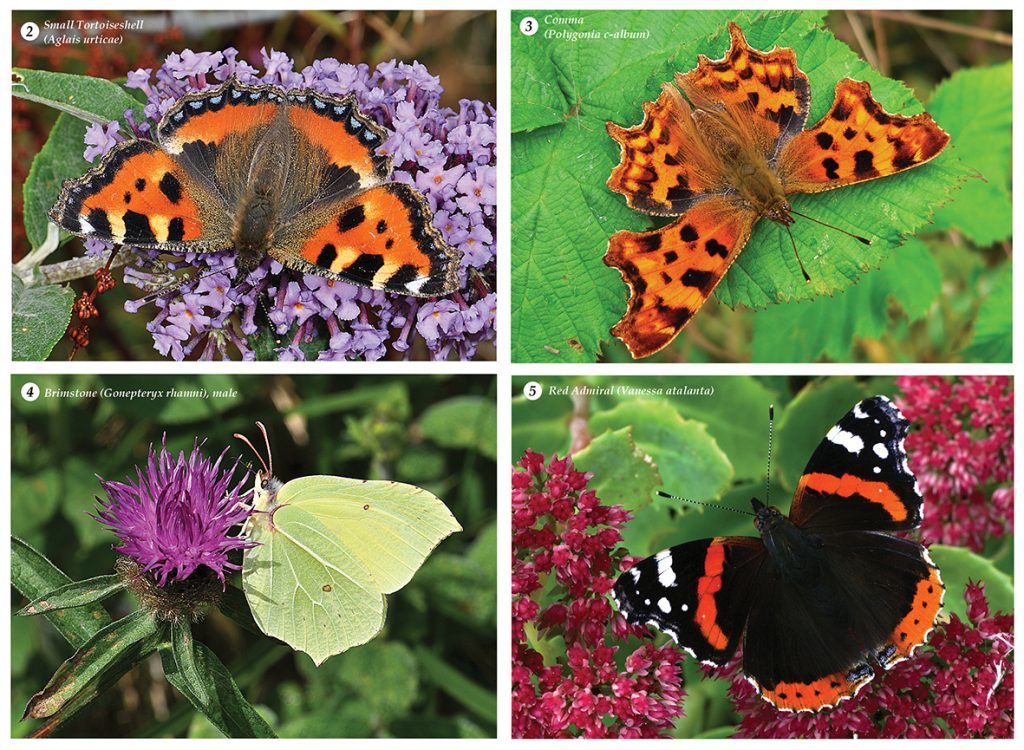 At first glance it is hard to imagine how such large and brightly coloured insects can possibly disguise themselves well enough not to be spotted by a hungry predator during the long winter, but seeing them at rest with their wings folded shows that they, in fact, possess remarkable camouflage.

With the exception of the Brimstone, they all have an intricate, brown mottled pattern on the underside of their wings which closely resembles bark or a dried-up leaf (see photos 1a – 5a). The deeply scalloped edges of the Comma serve to break up its outline particularly well, making it even harder to spot for would-be predators. The species with dark undersides overwinter in sheltered crevices, tree hollows and wood piles – as well as the aforementioned out-buildings – where their colouring renders them all but invisible. The greenish Brimstones, on the other hand, hide among ivy, holly and in bramble thickets, all of which remain green through out the year, allowing them to make the most of their particular form of camouflage. The shape of the Brimstones’ wings is unique among British butterflies, each of their four wings mimicking a separate leaf, complete with veins and leaf-tip. They always hold their wings folded above their backs unless they are flying, which helps to perfect the illusion. 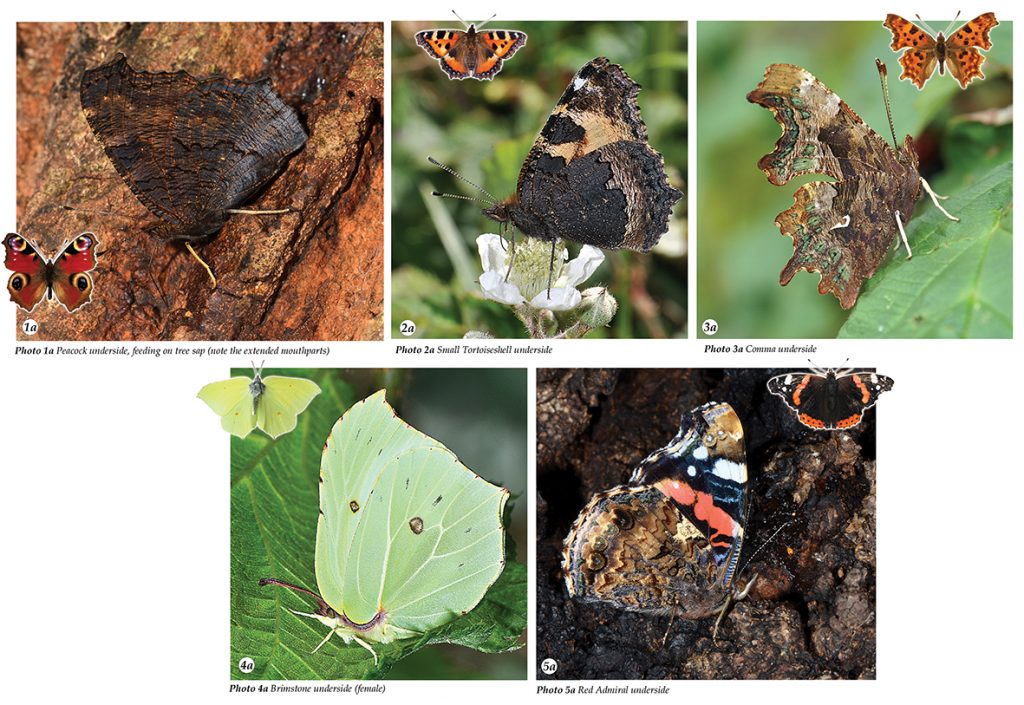 Having used up most of their body fat during their long winter rest, our overwintering butterflies need to find food as soon as the weather is warm enough to allow them to become active again. Once they have successfully restored their strength with some nectar, they quickly turn their attention towards finding a mate. The bright yellow male Brimstones actively search for the more greenish females, approaching and closely examining everything even slightly resembling a suitable mate, including members of similar looking species and even inanimate objects such as pale leaves. Male Peacocks, Small Tortoiseshells, Commas and Red Admirals follow a different strategy: they spend their mornings basking and feeding before setting up territories around lunchtime which they often claim for the rest of the day. During this time, they vigorously defend their chosen areas and attack any trespassing rivals. Depending on species, these are either chased away or outmanoeuvred in intricate aerial displays until they submit and leave of their own accord. Any female entering the territory is immediately pursued and, assuming she is ready to mate, is followed and elaborately courted, often for all of the afternoon, before mating finally takes place.

Next, the females set off in search of places to lay their eggs. In the case of the Brimstone, these will be young leaves of either Buckthorn (Rhamnus cathartica) or Alder Buckthorn (Frangula alnus). Both Brimstone eggs (photo 6) and caterpillars of all ages (photos 7 and 8) are very well camouflaged and depend on their low profile to keep them safe throughout their development. The Comma also relies on a disguise for its safety, however it pre-tends to be even more uninteresting than a leaf by convincingly mimicking a small bird dropping (photo 9). The Comma’s preferred larval food plant is the Stinging Nettle (Urtica dioica), but it can also live on Hop (Humulus lupulus) as well as various species of currants (Ribes spp.), elms (Ulmus spp.) and willows (Salix spp).

For the Peacock, the Small Tortoiseshell and the Red Admiral, the Stinging Nettle is their primary larval food plant. In contrast to the Brimstone and the Comma, the caterpillars of all three of these species are not particularly well camouflaged, being quite dark and spiny (photos 10, 11 and 12). They do, however, have a special trick up their sleeve: they use their ability to produce silk to provide them with added protection. In the case of the Red Admiral, the caterpillar pulls the edges of a leaf together and secures them with silk, allowing it to live inside the resulting tent, which it periodically exchanges for a new, bigger one as it grows. The Peacock and the Small Tortoiseshell go one step further in that they live in groups and together spin large communal webs for shelter at the top of their foodplants (photo 13) which they venture out of to feed and bask in the sun, especially as they get older (photo 14).

Under favourable conditions, the development of the caterpillars takes around four weeks, during which period they moult four times and grow to several hundred times their weight at hatching. When they are ready to pupate, they look for a secluded spot and anchor themselves firmly by means of hooks at the tip of their abdomen (photo 15). After 2-4 weeks (largely dependent on temperature), the adults emerge.

And so, at a time of year when other species of butterfly which did not overwinter as adults are frantically busy with their respective breeding seasons, most of our newly emerged individuals have nothing more to do for the rest of the year than to feed on the plentiful summer flowers and build up fat reserves ready for the next winter.

Depending on weather conditions, and especially in the case of Small Tortoiseshells and Commas, some go on to breed in the same year producing a second generation,

the adults of which emerge in late summer and even into early autumn. Individuals from this second generation, in particular, have to feed until late in the season in order to fatten up sufficiently to survive the winter, which often makes them not only the first, but also the last butterflies to delight us each year.