When I tread the verge of Jordan,
Bid my anxious fears subside,
Death of death, and Hell’s destruction,
Land me safe on Canaan’s side.

No sooner than Christmas is behind us, we begin looking forward to a particularly early Easter in 2016. Just as Christmas has its period of build-up and anticipation, the season of Advent, so Easter is preceded by a time of preparation, known as Lent. The season of Lent lasts for forty days (not including Sundays), and historically developed as a time of teaching, prayer, fasting and penitence – especially for those preparing to join the Church through baptism at Easter, and for those seeking to be restored to the Church’s fellowship after lapsing from membership through sin or apostasy.

The forty days of Lent have a number of parallels in Scripture: the forty years spent by the Israelites wandering through the Sinai desert, before their entrance into the Promised Land; the forty days that the prophet Elijah spent travelling to Mount Sinai when, at the lowest point of his spiritual journey, he sought a fresh encounter with God; and the forty days spent by Jesus in the wilderness following his baptism, being tempted by the devil. The common denominator in all these experiences – apart from the number forty – is the desert.

For the Abrahamic faiths, the desert has always had a special symbolism as a place of spiritual encounter: a place where demons and dark forces may assail the faithful; but also a place where God speaks to his people in a particular and powerful way.

So it was entirely natural that our pilgrimage to the Holy Land should include a visit to the desert; and after our first few days in Jerusalem, we set out into the Judean wilderness. However, our air-conditioned coach was a far more comfortable mode of transport that anything our Biblical predecessors had at their disposal!

The Dead Sea – which was the geographical focus for the third full day of our pilgrimage – has a number of superlatives attached to it. It lies within the Jordan Rift Valley, and is 429 metres below sea level, making it the planet’s lowest elevation. It is 304 metres deep, the deepest salty lake in the world. And, with a salinity of around 34% – ten times that of Earth’s oceans – it is the world’s saltiest body of water. This salinity means that no animal can hope to thrive within it, hence its name.

The reason for the Dead Sea’s saltiness is that it has no natural outlet. It receives water, but it refuses to give water away – and as a result (like all who take, but do not give), it is dead. Its main tributary is the Jordan River, which brings fresh water down from the Galilean hills to the north. The salt and minerals of the Dead Sea have been used for centuries, providing asphalt used by the Egyptians in their mummification processes, and potash for fertilisers. There is now a considerable industry in the use of Dead Sea products in cosmetics and health treatments, and a number of spa resorts have sprung up along the western shoreline.

But the Dead Sea is in trouble. Since the 1970s, it has been shrinking because of the diversion of incoming water from the Jordan River for agricultural and industrial purposes. Currently, the waters are dropping at an alarming rate of about 1 metre per year, and satellite pictures readily and dramatically show the effects of this shrinkage. In 2014, Israel, Jordan and the Palestinian Authority agreed to the construction of a water pipeline to link the Dead Sea to the Red Sea, and it is to be hoped that such a project will help to alleviate the Dead Sea’s decline: because urgent action is undoubtedly necessary if the ecological, economic and environmental viability of the Dead Sea region is to be preserved.

The experience of floating in the Dead Sea is one that all visitors should try – at least once – and I was no different. However, I can’t say that I particularly enjoyed the experience! One has to be very careful not to get salt in one’s eyes or mouth, and the floating itself was something I couldn’t get used to at all; some of my fellow pilgrims, though, looked very relaxed indeed as they basked in these most peculiar waters. Should I ever return to the Holy Land, it’s not something I’ll be that eager to repeat…

Just because the Dead Sea is devoid of animal life, one shouldn’t assume that the environment around the Dead Sea is completely inhospitable. Hundreds of bird species are found in the Dead Sea region, and also many species of mammal, including hares, hyraxes, foxes and jackals: and, if anything, the area was positively teaming with life in former times. The lowermost reaches of the Jordan River, in and around Jericho, were once full of papyrus and palm trees. The Jewish historian Josephus, writing towards the end of the first century AD, described Jericho as ‘the most fertile spot in Judea’; and in Roman and Byzantine times, sugarcane, henna, balsam trees and sycamores all helped to make the lower Jordan valley wealthy. 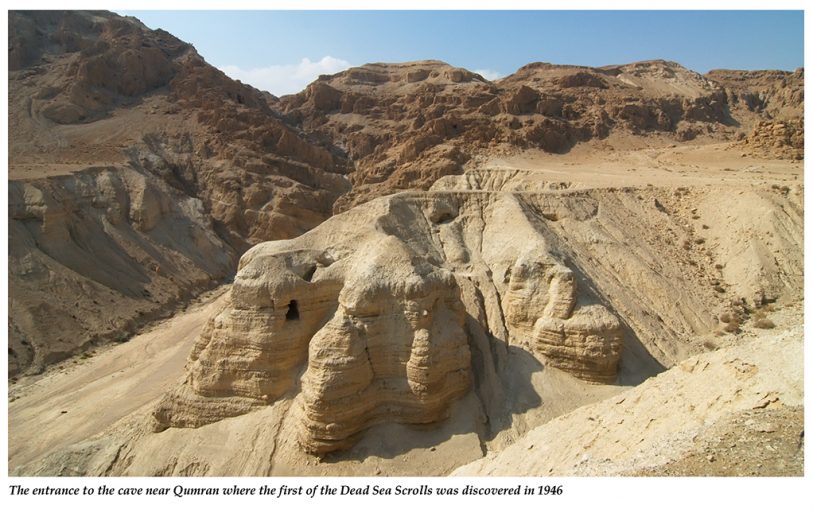 As well as animals, humans were surprisingly resilient in living in the environs of the Dead Sea. As testified by Scripture, the wilderness always had a particular allure for those seeking spiritual enlightenment. One of the most important sites of human habitation during Roman times was the so-called Qumran community. Cisterns, Jewish ritual baths and cemeteries have been excavated, and it has been hypothesised that Qumran was home to a Jewish sect known as the Essenes.

The Essenes were a branch of Second Temple Judaism that flourished from the second century BC to the first century AD. They were fewer in number than the Pharisees and Sadducees – the other principal Jewish sects of the time – and are not specifically mentioned in the New Testament, which has caused some scholars to question their existence. However, they are mentioned by a number of prominent classical historians, including Pliny the Elder, Philo and, most significantly, Josephus, who claims to have had first-hand knowledge of them. The Essenes embraced an ascetic, simple lifestyle, within a degree of communal living, and practiced daily ritual immersions. Their doctrinal beliefs were mystical and strongly messianic.

Close to the Qumran community itself are a series of caves in which, beginning in 1946, a series of religious documents collectively known now as the Dead Sea Scrolls were discovered. These documents preserve multiple copies of almost the entire Hebrew Scriptures (the notable exception being the Book of Esther), stored untouched for two thousand years or more until their discovery. 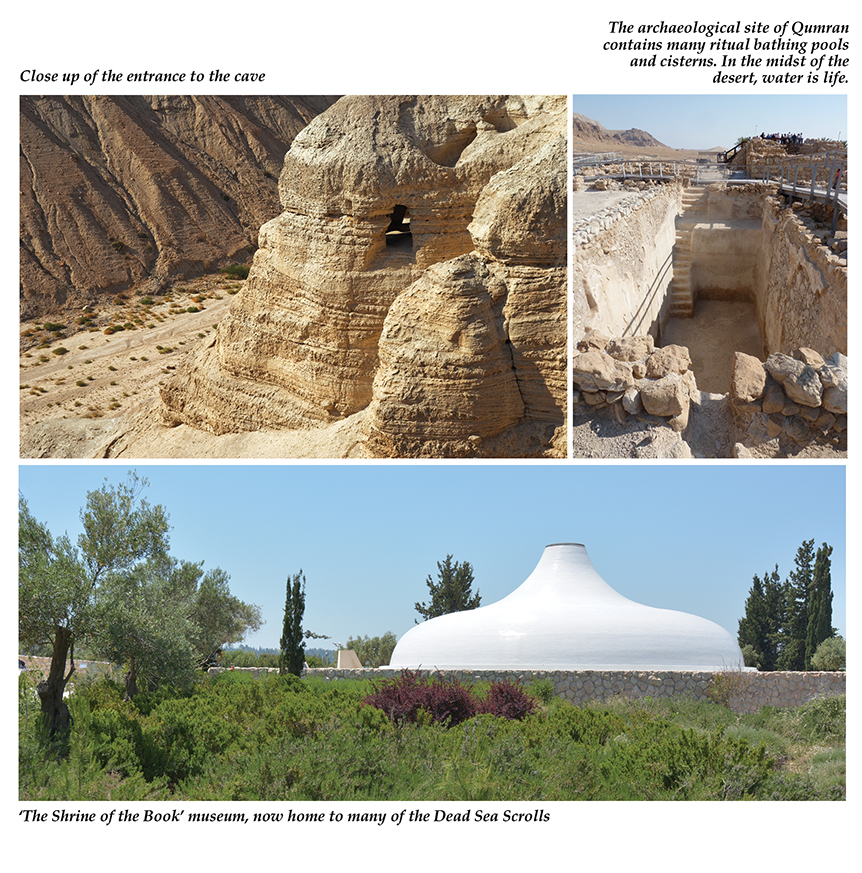 Previous to their finding, the oldest texts of the Hebrew Scriptures were a little over a thousand years old; and so, not surprisingly, their discovery was hailed as the greatest archaeological find of the twentieth century.

As well as visiting Qumran itself, we were privileged to see – the next day, in Bethlehem – the large stone jar in which the very first of the Dead Sea Scrolls to be discovered once resided. We also saw copies of the Scrolls that are held on display at the ‘Shrine of the Book’, part of the Israel Museum. The permanent Dead Sea Scrolls exhibition at the museum features a reproduction of the Great Isaiah Scroll, surrounded by reproductions of other famous fragments that include the Community Rule, the War Scroll, and the Thanksgiving Psalms Scroll.

The pious residents of Qumran were not the only humans living in the Judean wilderness two thousand years ago. The infamous, cruel and paranoid King Herod the Great built or reinforced a number of fortified palaces as remote desert retreats. One such fortress was Herodium, an impressive royal palace built on top of an artificial hill, where it is believed Herod was eventually buried. Another was Machaerus, where John the Baptist was imprisoned and later executed. Most notorious of all was the fortress of Masada, which three quarters of a century after Herod’s death acquired a fame so great as to make it ever after a byword for Jewish resilience and resistance.

In 66 AD, at the beginning of the First Jewish Revolt, the Roman garrison at Masada was overcome by the Jewish rebels, the Sicarii. After the Roman recapture of Jerusalem, and the destruction of the Second Temple, in 70 AD, the rebels at Masada remained as one of the last sources of defiant resistance. In 73 AD, after a determined siege involving 15,000 men and auxiliaries of the X Legion, and the construction of an enormous camp (the remains of which are still clearly visible two millennia later), the Roman governor Lucius Flavius Silva succeeded in retaking the fortress: only to discover that almost all of the 960 defenders – men, women, children – had committed ritual suicide rather than surrender. According to Josephus, once again our main historical source for these events, only two women and five children were found alive.

The story of the siege of Masada was made into a memorable television miniseries in 1981 (I recall watching it as a teenager!), starring Peter O’Toole as Lucius Flavius Silva. The series ends with a despondent Silva reflected on the futility of a battle fought for ‘an island of rock in an ocean of sand on the edge of a poison sea…’ – words probably not recorded by Josephus, but ones that perfectly capture that sense of the utter futility of war, then as now. 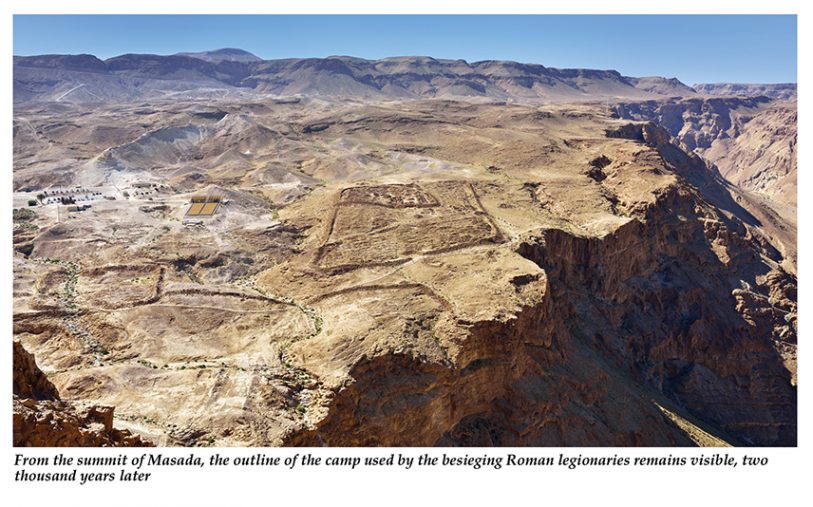 Wandering amongst the ruins of Masada, every stone steeped with the sad memories of two thousand years past, was a somber experience.

As war rages in the Middle East once more, I find myself inevitably asking – will we ever learn?

Thankfully, our desert wanderings ended with a glimpse of another way of life. From a vantage point on the opposite side of the valley, we were able to view the magnificent sight of the ancient monastery of St George of Choziba at Wadi Qelt. The monastery quite literally clings to the cliff-side of the Wadi Qelt, which according to some traditions is the original Valley of the Shadow as described in Psalm 23. 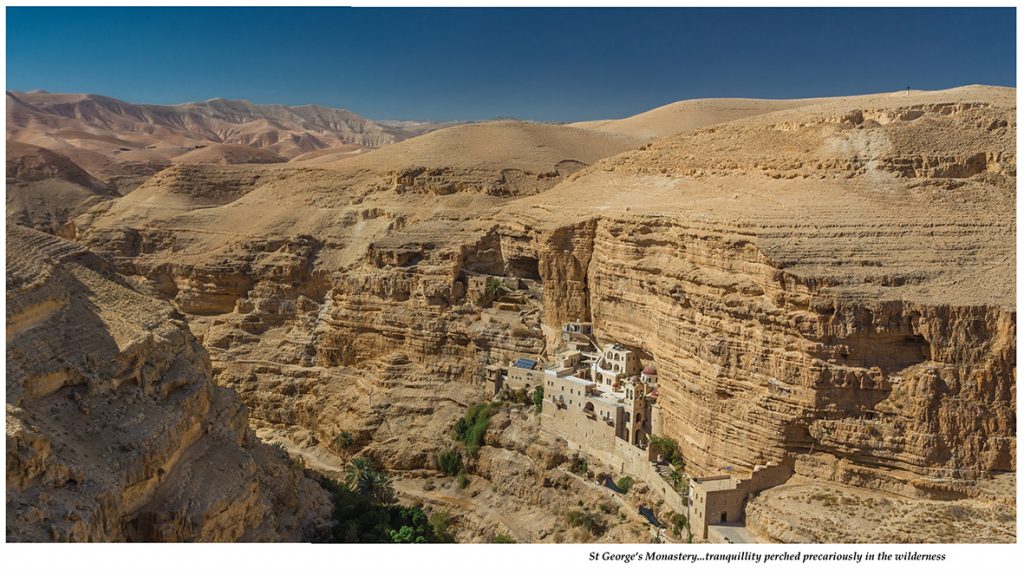 The foundations of the monastery can be traced back to the fourth century when a few monks, seeking the desert experience of the prophets, settled around a cave where they believed Elijah was fed by the ravens (1 Kings 17.5-6). The Orthodox monastery was built in the late fifth century, and was named not for the St George of dragon-slaying fame, but for another George, the most famous of the monks who lived at the site.

The monastery was destroyed by the Persians in the seventh century, and restored by the Crusaders in the twelfth century, only to fall into disuse following their expulsion. The modern-day monastery dates back to the nineteenth century.

Here, then, was a beautiful and hopeful metaphor for life in the wilderness: precarious, living on a knife-edge, sometimes succumbing to disaster and destruction; but always capable of renewal and rebirth.

A place of faith, a place of encounter, and a place for fresh starts. Remember that, if you think of yourself as being a wilderness right now. Something new and exciting might be just around the corner…

And next month…we’re off to Bethlehem!