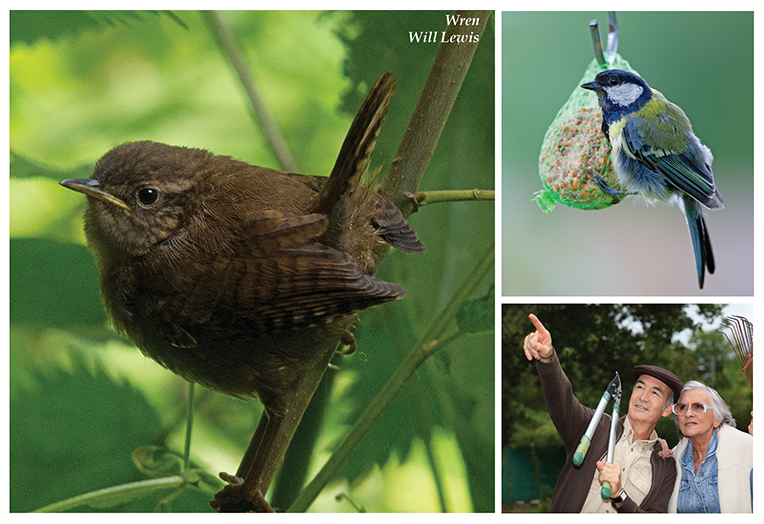 Welcome to this month’s Bird Watch. I’m one of two volunteer Ambassadors for the British Trust for Ornithology’s (BTO) Garden BirdWatch scheme in South Wales.

Garden BirdWatch is the largest year-round survey of garden birds in the world. Through simple weekly observations we can learn how, when and why birds and other wildlife use our gardens (a habitat that can’t be studied without the help of citizen scientists). When the survey began in 1995 people were less aware of the significance of gardens as habitats for our wildlife and funding was hard to come by for garden surveys. Fortunately Garden BirdWatchers believed in such surveys and it’s with thanks to our supporters that we reached our 20th anniversary in 2015.

Over 7.3 million weekly submissions have been made in the past twenty years. There has been at least one week’s data submitted from an impressive 30,271 gardens. Many participants have said that the survey enables them to contribute to an important scientific survey, whilst they engage in one of their favourite pastimes of watching garden birds. An amazing 708 people have taken part for the duration of the survey, including one member in Monmouthshire who has only missed 4 weeks in all that time! 5% of Garden BirdWatchers live in Wales (86.5% in England, 7% in Scotland and 1% in Northern Ireland).

On average 29 different bird species have been recorded per garden (our Swansea garden attracts an average of 15 per week). Other wildlife, such as mammals and a range of insects, can also be noted (data which is then shared with relevant organisations) and a staggering 481 different species have now been recorded. The average number of species per garden is 34.9 but, whilst we have a respectable garden list of 65, one Cumbrian garden has recorded 167!

Participants typically see three more bird species in their garden now than they would have done in 1995. Blackbird, Blue Tit and Robin are still among the top five species seen in gardens, but who would have envisaged that the House Sparrow would drop out of this five and that Woodpigeon would creep up? By studying garden birds over a long period of time we have seen once rare garden visitors, such as

Goldfinch and Great Spotted Woodpecker, become more familiar as they are increasingly attracted to the food we provide. In recent years, milder winters are bringing fewer migrant thrushes, such as Redwing and Fieldfare, into gardens.

Garden BirdWatch data is helping the BTO and its partners to understand the role that disease can play in garden wildlife populations. We have witnessed a dramatic 35% decline in the population of Greenfinch since trichomonosis began affecting this species in 2005. This decline has been very evident in our garden as back in 2005 we regularly counted 20 to 50 Greenfinches but over the past few years we’ve rarely counted more than three.

MAKE YOUR GARDEN COUNT – THERE’S STILL A LOT TO LEARN!

If you already spend a few minutes per week watching the birds in your garden, please consider joining Garden BirdWatch and help contribute records towards the next twenty years! For more information, please visit the website or give me a call. Please also get in touch if you’d like to book a talk (Swansea and surrounding areas).