LIAM BIRD, OUR MOTORING CORRESPONDENT, HAS A FAMILY HISTORY IN LIVERPOOL AND KNOWS IT WELL.

LAST MONTH HE JOURNEYED TO THE LAND OF HIS FATHERS AND SPENT A WEEKEND REVISITING OLD HAUNTS. 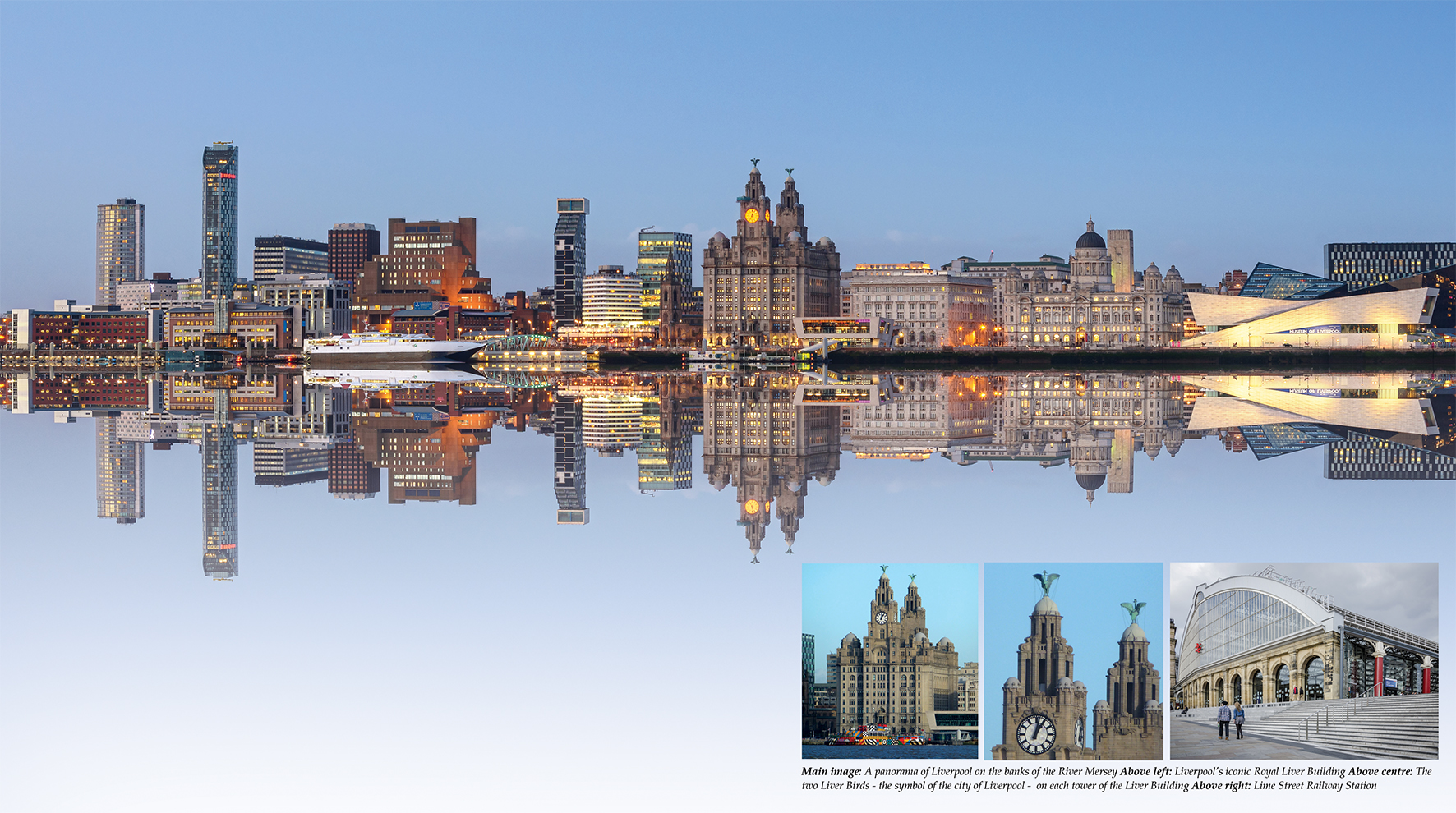 We parked the car on Pall Mall, strolled up to Old Haymarket via Marylebone, turned right on to Whitechapel and eventually ended up on The Strand, opposite The Albert Dock. But, we weren’t not in London.

Quite why Liverpool has so many street names in common with the capital I’ve never quite fathomed; there’s an area called Kensington, a Covent Garden too. Is it a Victorian thing, flattery perhaps, or just plain imitation? Does it hark back to the time when Liverpool was the second city of the British Empire I wonder? Neither my dad or my uncle Jim, both of whom were born here – the latter still lives here – know the definitive answer either. They also both joke that these days it’s me who knows his way around best.

I know I said I drove up, but from Swansea it’s a 4½ hour train ride through the very picturesque Shropshire Marches with a change at Crewe before you arrive at Liverpool Lime Street Station. I assume you’ll be wanting a little brunch, upon your arrival?

There’s often a queue outside Moose Coffee on Dale Street in the mornings, but I assure you their all-day American breakfast menu is well worth the wait. Tea, coffee, pancakes, bacon, maple syrup, eggs over-easy, orange juice, even grits if you’re feeling brave. You name it, you’ll get it here. Indulge yourself, you’ll need a good fill to stave off the bitter wind that blows in off the river. And besides, what else are you are going start the day with in the city that was once christened the New York of Europe?

You might like to ponder over a few facts too, while you decide if there’s still room left for some cake.

Liverpool has more Grade II-listed building than any other city outside of London, and more Georgian buildings than Bath. It’s a UNESCO world heritage city, and it’s also the most filmed in city outside of London: The 51st State, A Letter to Brezhnev, In the Name of the Father, Backbeat, they were all filmed here, as were TV series such as Foyle’s War, Boysfrom the Black Stuff, and of course Brookside. Hugh Grant and Meryl Streep were spotted on Brunswick Street not so long ago and St George’s Hall, the building you would’ve spotted (you can’t miss it) as you left the station, will soon appear in the latest Harry Potter spin-off.

Then of course there’s the music. Liverpool’s most famous sons are without doubt Lennon, McCartney, Harrison, and Star(key) but I bet you weren’t aware that this Merseyside Metropolis also holds the Guinness World Record for being the capital of pop. More number one singles have come out of Liverpool than anywhere else on earth. There’s a “Wall of Fame” that lists those who either wrote or sang them on Mathew Street opposite where the infamous Cavern Club once stood. It’s just around the corner from Moose. Turn left at The Hard Day’s Night Hotel on North John Street. 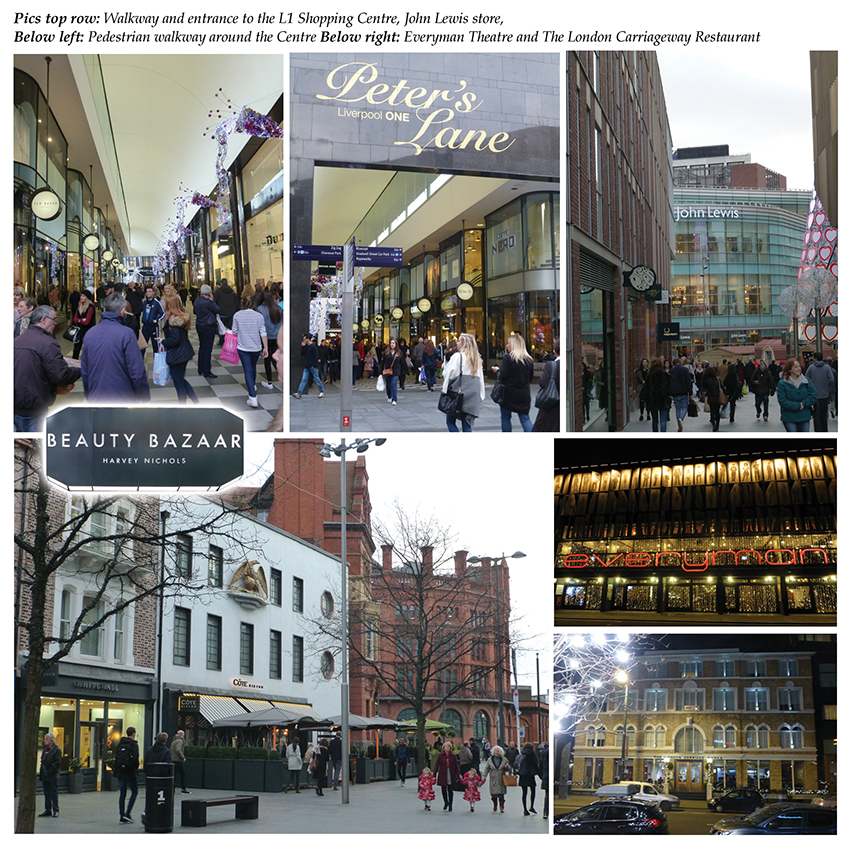 Fashion and football are also taken very, very seriously here. Whether you’re a red or blue, or just a conscientious objector like me, the fact that Liverpool named their memorabilia shop Liverpool One (after the very plush new L1 shopping development of the same name) and then Everton promptly named theirs Everton Two probably won’t be lost on you. Instead, if it’s not a numbered nylon shirt and some stripy socks you’re after, the likes of John Lewis, Harvey Nichols, Vivienne Westwood, Hugo Boss, Michael Kors, Paul Smith, and the near-legendary Liverpool boutique that is Cricket – ironically a hangout for many a WAG and wannabe – should be more than up to the task of kitting you out for a very stylish night on the town.

If you’ve enough energy left after an afternoon’s and evening’s shopping – most of L1’s stores stay open to 8pm – how about dinner or the theatre? Or maybe both, perhaps even in the same building? The Liverpool Everyman Theatre on Hope Street not only plays host to many a great play and performance but it’s also got a superb and very reasonably priced bistro beneath it in its cellar. The Scouse here – it’s a stew as well as an accent – like the rest of what’s on offer, is excellent. Red cabbage and crusty bread are the traditional side dishes – just so you know.

Should you find the Everyman full, along the street you’ll spot the Liverpool Philharmonic Hall, and the “Dining Rooms”, of the same name, they’re very ornate, and well worth a look. The London Carriage Works is virtually next door but-one – part of the Hope Street Hotel – whilst Liverpool’s latest dining hot-spot, The Old Blind School lies just a short step away on Hardman Street. A word of advice though, book first, even midweek it’s busy. 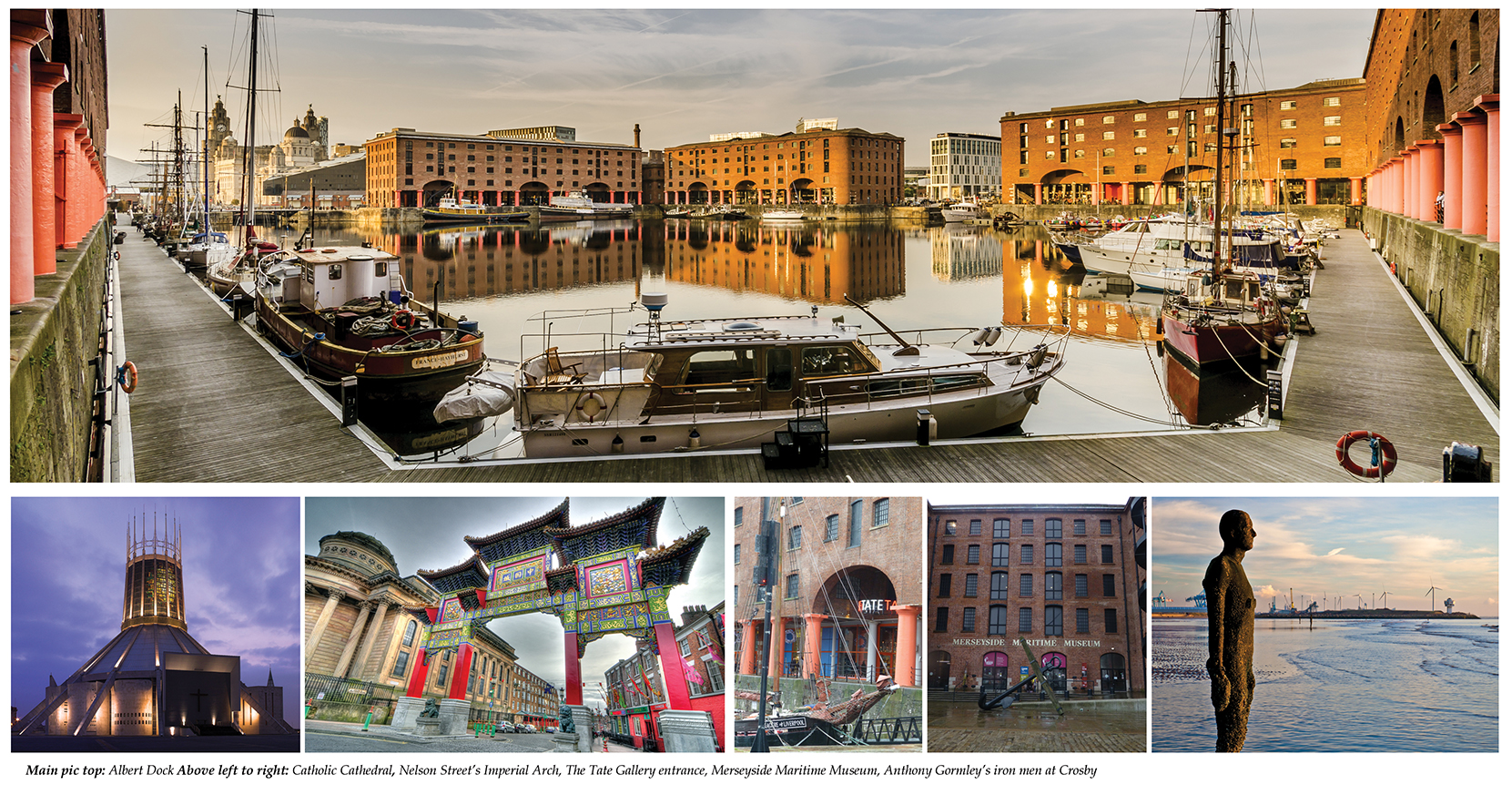 In fact the Georgian Quarter as this area is known (it lies predominantly between the Anglican Cathedral and Paddy’s wig-wam – that’s the Catholic Cathedral, so called because of its shape) is home to many a good eatery – as is the whole of the city in fact. If you fancy a Chinese meal, try Nelson Street; you won’t miss it, the biggest Imperial Arch outside of China sits at its upper end. Or for Thai, try Mantou on The Pier Head just opposite The Three Graces. That’s not a pub by the way. The Three Graces are the Liver Building, the Cunard Building and The Port of Liverpool Building.

So, how about somewhere to stay? The aforementioned Hope Street Hotel is lovely, as is their afternoon tea. It is a bit pricey though, as is the equally plush Malmaison for that matter. The Hard Day’s Night is a must if you’re a Beatles fan, however if you’re not, the frivolities and the inevitable noise that comes from the nearby Cavern Quarter could become tiresome and The Crowne Plaza in St Nicholas Place isn’t bad either. There’s a plethora of Premier Inns, Travelodges and serviced apartments dotted around too if you’re on a budget. But for my money, the Radisson Blu on Old Hall Street takes some beating. It’s only a short walk from the city centre, it’s always comfy and clean, and it manages to stay clear of the dreaded stag and hen-night crowds. The views of the famous ferry and the Mersey from its breakfast room are a bonus too. I’m also told that the recently opened Titanic Hotel is very good – it certainly looks it.  It’s built in a former rum and tobacco warehouse, the largest purpose built red-brick building in the world in fact, on what’s known locally as The Dock Road. You’ll need a cab to and from town though if that’s your intended destination.

After what might prove to be quite a big night out how about something more gently paced for the morning after?

A museum and/or a gallery perhaps? The Walker Art Gallery; The Tate, The Museum of Liverpool Life; The Maritime Museum… the list goes on. Or, if you’d prefer to forego the crowds completely but still sample some culture, a short train ride up to nearby Crosby is all it takes if you fancy to walk on the beach amongst Anthony Gormley’s iconic iron men at Another Place. Alternatively, and in the other direction completely, a trip to the Palm House in Sefton Park and a coffee afterwards on Penny Lane – yes that one – or, better still Lark Lane, might just be the ticket. You’re unlikely to see the banker, the barber or the fireman these days though. Tea shop Leaf on Bold Street, back in town, brews a fine cuppa too.

I’ve been coming to Liverpool for almost as long as I can remember, and despite never having lived here, it’s always been a city I’ve felt very much at home in. Liverpool’s constantly evolving and it’s recently been voted one of the friendliest cities in the UK. It’s a favourite place, one I visit whenever and as often as I can.

I strongly recommend that you do too.