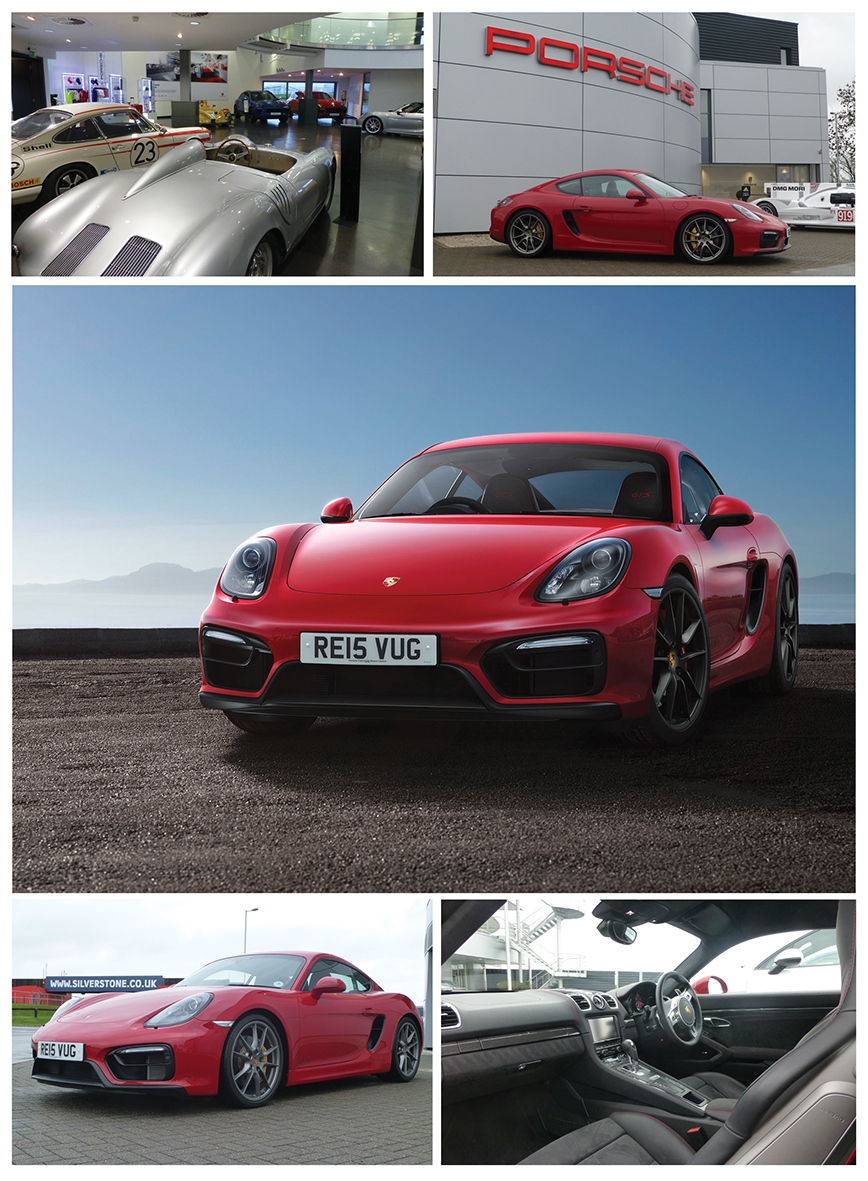 Formula 1’s most notorious playboy James Hunt had a patch on his overalls stating that “Sex is breakfast of Champions”, but when it comes to endurance drivers I know for sure that it is actually porridge. I know because Porsche driving legend Richard Attwood (right), the man that taught actor Steve McQueen how to handle a 917, and co-driver to Hans Herrmann in the 1970 24hr Le Mans (they won) is sitting at the next table and he’s just ordered some – with honey and nuts to be precise. When the time comes to place my order I ask for the same.

The porridge comes courtesy of Porsche, the venue of their Driving Experience Centre. Usually when I ask the Porsche press office if they’d be willing to let me sample one of their cars, they send one up to me – I know, I suffer for my art – but this time they’ve suggested something different. To cut a long story short, a few weeks later I find myself sitting in the Porsche Restaurant, in exalted company, overlooking Silverstone’s Hangar Straight on a cold and wet Monday morning.

The purpose of my visit is to not only discover more about the Cayman GTS that I’d originally asked to drive, but also to learn more about my own driving technique; whether or not I actually have any skills, and of course to hopefully iron out any bad habits I may or may not have picked up along the way. As a former driving instructor myself I’m all too aware of how driving is something far too many of us all take for granted. And it’s never too late to learn something new.

Shall we get things warmed up?” asks Eunan McGuinness the man whose job it is to occupy the passenger seat of the Cayman.  Eunan’s been teaching high performance driving, and defensive driving techniques for more years than it’s polite to mention, he also holds more driving qualifications than I even knew existed.  Best of all though, he’s incredibly easy to get along with.

Once safely strapped in, and with the Cayman’s electrically adjustable seats and steering column set just-so, we’re out on to the Handling Circuit for a few gently-paced laps in order for the Cayman’s tyres, the oil in its beautifully sounding trademark 3,463cc flat-six, and its 7-speed PDK automatic gearbox to get up to working temperature. The first few laps also give Eunan a chance to see what he thinks of my driving.

Once everything including me has warmed through he begins to administer advice like a Jedi Master. On one off-camber right hand bend I tell Eunan the Cayman is under-steering (that’s when the front wheels wash wide and don’t follow your intended line). “You’re right” comes his considered reply (Phew!)  “But it’s not the car, it’s what you’re doing with it. Try braking a little later next time round and turning in just a bit later. That way you’ll get more weight over the front wheels and more grip” It turns out he’s right too. Next time around after a firmer push on brakes and a later entry to the curve the Cayman’s thick-rimmed steering wheel doesn’t feel as light mid-corner. Under-steer banished. Lesson learnt.

As the morning’s one-to-one session progresses (it’s been designed to let prospective Porsche purchasers and petrol-heads alike get a feel for the German marque’s products – it would also make a fine Valentine’s or birthday present) the more I learn. Selecting Sport Mode might seem like a completely alien thing to do when entering a 30MPH zone but during our road-route drive through nearby Towcester that’s exactly what Eunan advises. “The gearbox won’t be so inclined to change up and you’ll have more control. You won’t find you’re inadvertently doing 38mph downhill because it’s changed up to fourth. Because the Cayman is as easy and as unintimidating to drive in traffic as a Golf and it slips between gears almost seamlessly it’s all too easy to do just that, to just relax behind the wheel and let it do its thing. Once again Obi-Wan McGuinness is right.

Back at the track there’s further tutoring. A wickedly slippery low friction surface known as the Ice Hill provides the next challenge. Conventional wisdom says that to make it to the top you need to use the right amount of speed at the bottom, where the grip is, to provide enough momentum to make it to the top. The trick however is to shun convention and believe it or not, to switch the Cayman’s traction control system off too. With it engaged as soon as the rear-wheels start to loose traction the electronics cut power to the engine and you’ve simply no chance of summiting. Switch it off and the rear wheels are allowed to spin (within reason, the truth is the traction control will still intervene if you’re really heavy-footed) but the engine’s power remains. With a little light steering correction here and there and a far gentler right foot the Cayman climbs the hill as if it was wasn’t there.

Where the stability (PASM) and traction control systems do come into their own though is when Eunan directs me onto The Straights, the new extended section of the Handling Circuit. After talking me through the Cayman’s Launch Control system I’m positively encouraged to hit the throttle as hard as I can before hitting the brakes with similar gusto. Such is the Cayman’s ferocity under acceleration we’re doing well over 80mph before it’s time to swap pedals. Even on rain sodden tarmac and with my hands off the wheel – I was just following instructions! – we track straight as a dye under braking, the ABS system constantly monitoring which wheels have the most grip and braking them accordingly. Forget 0-60 times, honestly 60-stop times are far more impressive.

More time is spent slipping and sliding courtesy of Porsche’s kick-plate and skid-pan. “You can’t catch all the slides Liam, no matter how hard you try. When it starts to spin just let it go. The front wheels will self-centre, they’ll be straight when you stop and it’s far easier to drive to a place of safety” comes the advice from the left-hand seat. “Don’t wrestle the car.”  After a few more, shall we say spirited laps, with the Caymans PDK gearbox blipping the throttle on the downshifts and making me sound like a heel-and toeing pro it’s time to come in.

“You’re not bad at all” He says “You’re consistent too. I’m pretty sure that I if I asked you to do five laps they’d all be completed in very nearly the same time. “You’ve got a real sense of feel – and no, I’m not just saying that” Flattery indeed. Nevertheless, I’ll readily admit I’m more than chuffed with his assessment.

Sadly though it’s too late for me to become a Le Mans winner, or a racing legend, no matter how many laps I’m allowed. It’s consistency though that counts, that’s the secret ingredient, that’s why, starting with Richard Attwood in 1970, Porsche have won more Le Mans than any other manufacturer. Well, it’s either that or the porridge.

Many thanks to Rob and Kate at Porsche’s UK press office and everyone at The Porsche Driving Experience. Special thanks to Eunan McGuinness.