Our contributors are nothing if not intrepid and their devotion to duty has to be admired. Either that or the editor is so scary that they will file their copy come what may!

This month KIM JONES’ plan to tackle this ride could have been a wash out bearing in mind the 80 odd continuous days of rain that we have had, but the weather for the next weekend had been predicted to be dry – well it was dry but it was also very snowy. 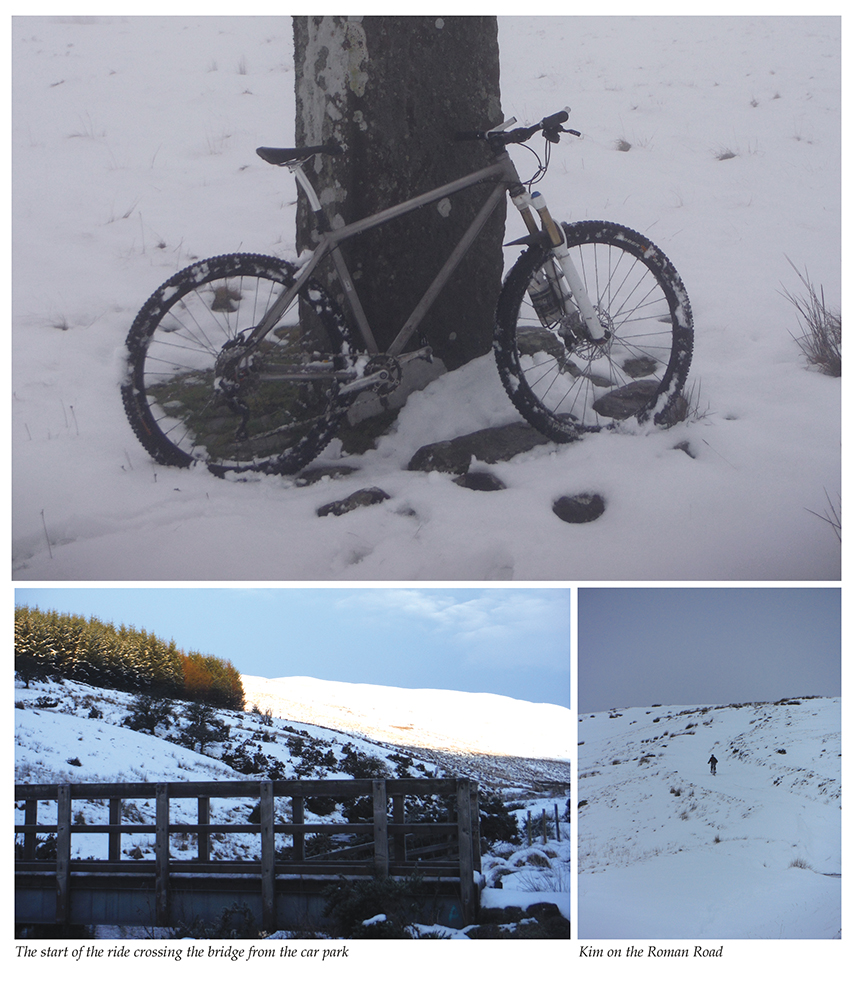 Some years ago, a Buddhist Monk asked me to walk back to his village with him, a 10 day walk through the frozen Himalaya, but the timing just wasn’t right for me, and I had to decline. Was this a lost opportunity? Should I have seized the moment? Often circumstances dictate otherwise so we carry on with our lives, safe and secure and are left wondering.

Last year when I was in Corsica I met a lady called Helen who said ‘I’m cycling to Tibet next year, why don’t you come?’ It was such a simple question but with such huge implications. Currently my life is full of uncertainties and this brief dialogue could change everything. Earlier in my trip our paths had crossed as we shared a view on a crazy descent into a deep gorge, conversation was easy as it seemed our ideals were similar. Later that week we met again though this time I was sitting with a glass of wine cocooned by my thoughts; ‘Think on it and let me know’.

That was some months ago and for the moment I am left wondering. In the meantime I’m wandering with a different Helen – Sarn Helen! This is the generic name given to several stretches of Roman road in Wales which at one time linked up to form a route between Carmarthen and Aberconwy. In this article we’re riding some of the section which runs from Neath to the Roman fort of Y Gaer near Brecon. Until recently this stretch had been open to 4 wheel drives and motorbikes but due to excessive and sometimes irresponsible use it now enjoys the same access rights as a bridleway. Access to the countryside is always a contentious issue and has to be managed carefully; but I think it’s fair to say the outdoors is there for everybody. Some people perhaps just need to be a little more thoughtful and aware of the consequences of their actions. 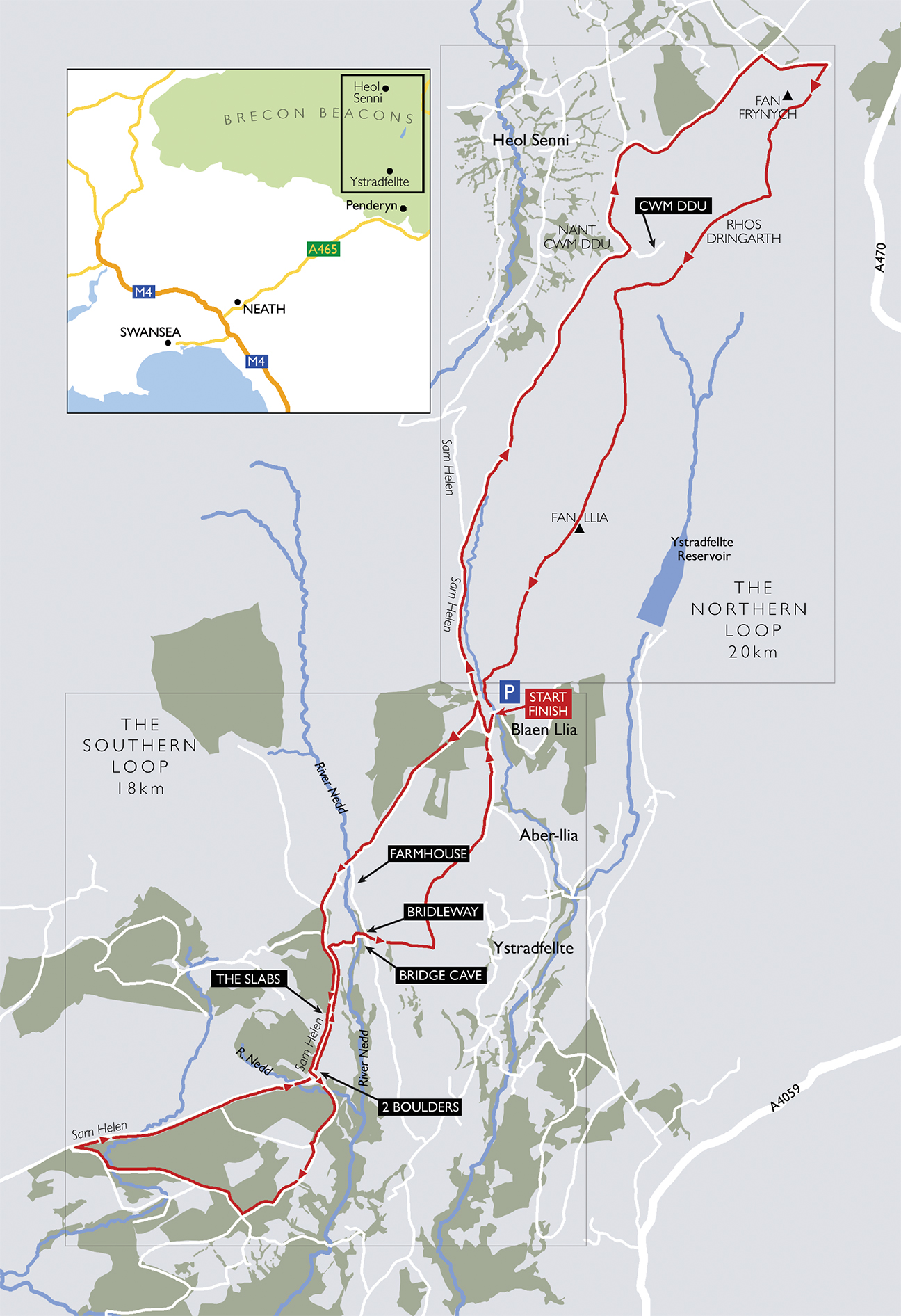 Starting and finishing at Blaen LLia (SN 926 164) this loop is a figure of eight with each side being very different in character. The northern loop (20km) initially takes you onto Sarn Helen but once you’ve climbed up to Fan Frynych, the nature of the ride changes completely with some fantastic open riding from Fan Frynych to Fan LLia. There are some wonderful views here across the Beacons and over to the Black Mountain which serve as some compensation for the climb to get here and of course the ride finishes with a great descent off the top.

The southern loop (18km) is lower lying and apart from a 2km stretch towards the end is all stony track or forest road, expect to get wet though, very wet! The section also contains an interesting section of sandstone slabs which I always refer to as the Welsh Moab. Although at only 38km, this ride is still a good day out with its fair share of climbing; alternatively you can choose to just ride either of the loops which both work well on their own.

Assuming you’re riding the complete route I’d recommend heading south first; this starts with a gradual climb before a fast rocky descent towards the Nedd. It wasn’t that long ago that here you’d have to contemplate the best line across the river whilst a generator rattled away in the background. Now there is a wooden bridge (which is absolutely lethal in the wet) and silence. Coed y Garreg, the house downstream now has mains electricity and was one of the last domestic dwellings in Wales to be connected to the grid. Periodically they have a pheasant shoot here and don’t seem averse to shooting across the track, despite it being a public right of way. Towards the end of last year I must say I was a little surprised when a pheasant flew above me only to be taken out with a shotgun which brought him down within a few metres of the bike. It did cross my mind to gather it up and continue my ride but then I thought better of it as they were armed!

Away from the river and after some rather deep puddles you’ll come to the slabs. These are great fun to ride and always seem to offer grip even in the wettest of conditions so have no worries about hitting them at speed. Below this after about 250mts is a left hand turn into the forest which is very easy to miss; you’re looking for 2 limestone boulders on your left shortly after a small stream crossing. Initially the path seems overgrown but stick with it as it soon takes you onto the forest road. I always thought that this area of woodland had great potential for mountain bikes and whilst if you take the time to look there are some great trails, unfortunately most of them have already been discovered by motocrossers and consequently are no fun to ride. Once out of the woods you’re back on Sarn Helen and will soon repeat a short section of the trail before heading west across some farmland and back to your start point. As you cross the Nedd for a second time have a look down, this stretch of river is normally dry but if it’s flowing, take a moment to wander downstream for a couple of hundred metres. When the river is in spate this really is a sight to behold as the brown boiling water thunders over a lip and into a cavern before disappearing underground, the air is thick with spray and you can feel the ground tremor beneath you under the force of the water. Also, keep an eye out for bridge cave down to your left as you clamber over the stile; this is also worth a look but possibly in the company of an experienced caver.

Onwards and upwards, a short sharp tarmac climb takes you to a bridleway. Please out of respect to the farmer, push your bikes across the field here then remount at the stile. Keep an eye on your bearing as you enjoy the views over towards Pen y Fan; once you reach the old drover’s track heading north you’re home and dry. If time allows and you’re of the mind, there’s a bridleway here which cuts down to Ystradfelte and the wonderful New Inn. Now run by Kath, the pub is again keeping regular hours and a warm welcome is guaranteed. Suitably refreshed, simply head out of the village on the tarmac to commence the second half of the loop. 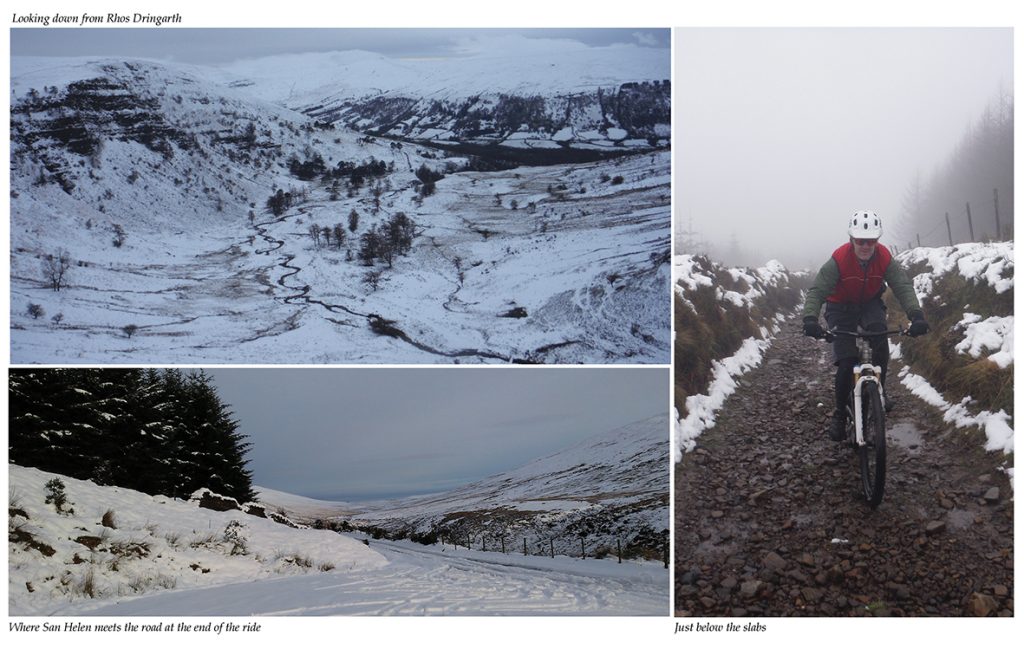 I must admit, this next bit is a personal favourite of mine, travelling along the Roman road taking in the views down the valley to Heol Senni; the challenging rocky descent (particularly if you’re on a hardtail) into Nant Cwm Ddu; the tough climb up and onto Rhos Dringarth and the magical ride up to and across the top of Fan Llia with the reservoir down to your left.  Cwm Ddu is one of those special places and I have spent many a night there under the stars; there’s also a sheep track leading down into the valley from the top of Fan Frynych which is an absolute joy to ride. 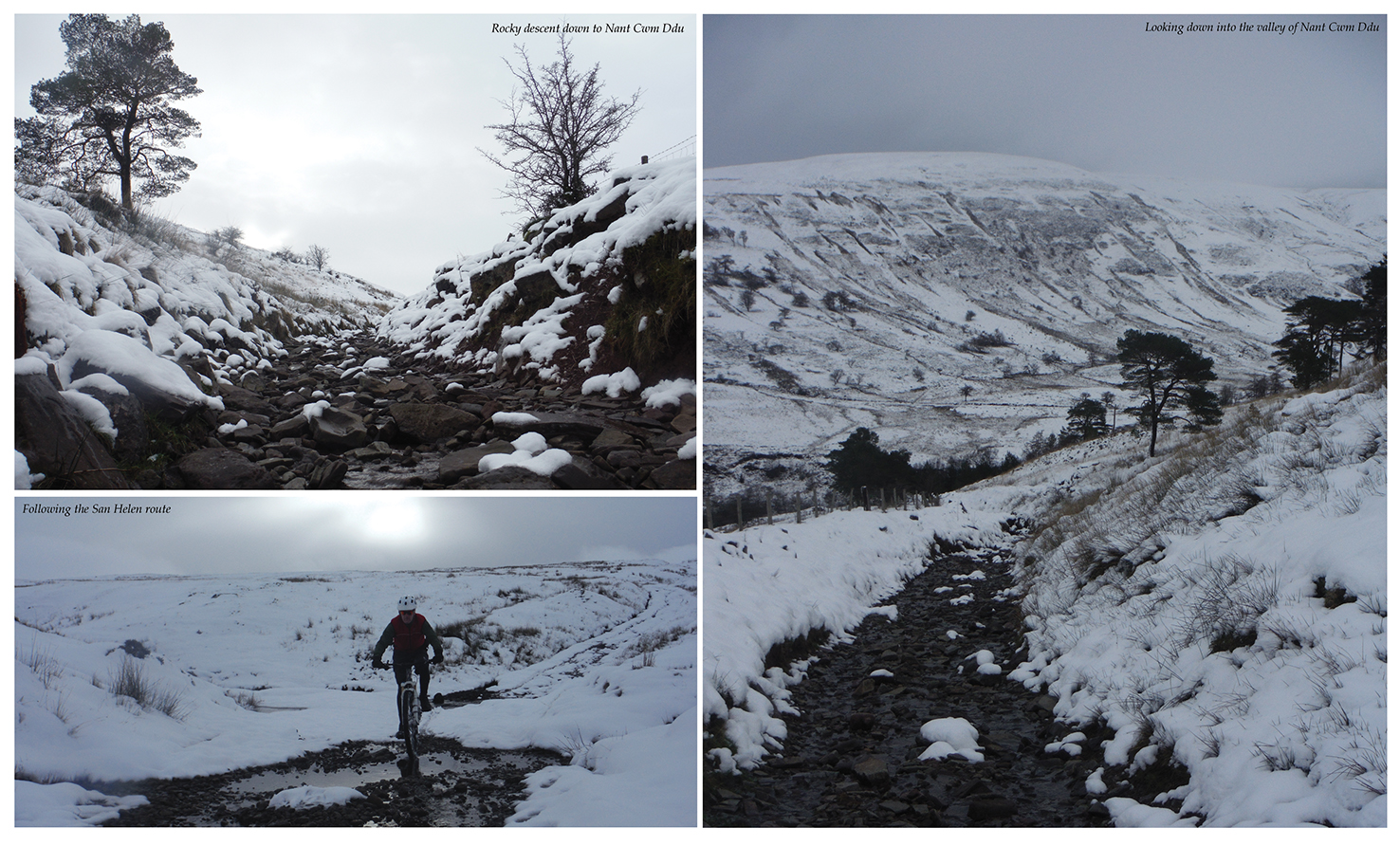 The last 8km of this ride offers some spectacular views but it can be tricky to find the sheep track which will ultimately bring you back to Blaen Llia. When you’ve reached the top of the climb that leads you onto Fan Frynych, follow the old stone track until you reach the second pool (SN959 221), ride for a further 50mts then head south west on a bearing of 244 degrees for approximately 2 1/2 km and you should come to some sheep pens. At the pens head south east on a bearing of 140 degrees and all being well you should find the path. If the weather is good you might well sight it on the way to the pens. Now breathe in the clean air, pull your zip up, stomp on the pedals and head back to your vehicle. A grand day out!