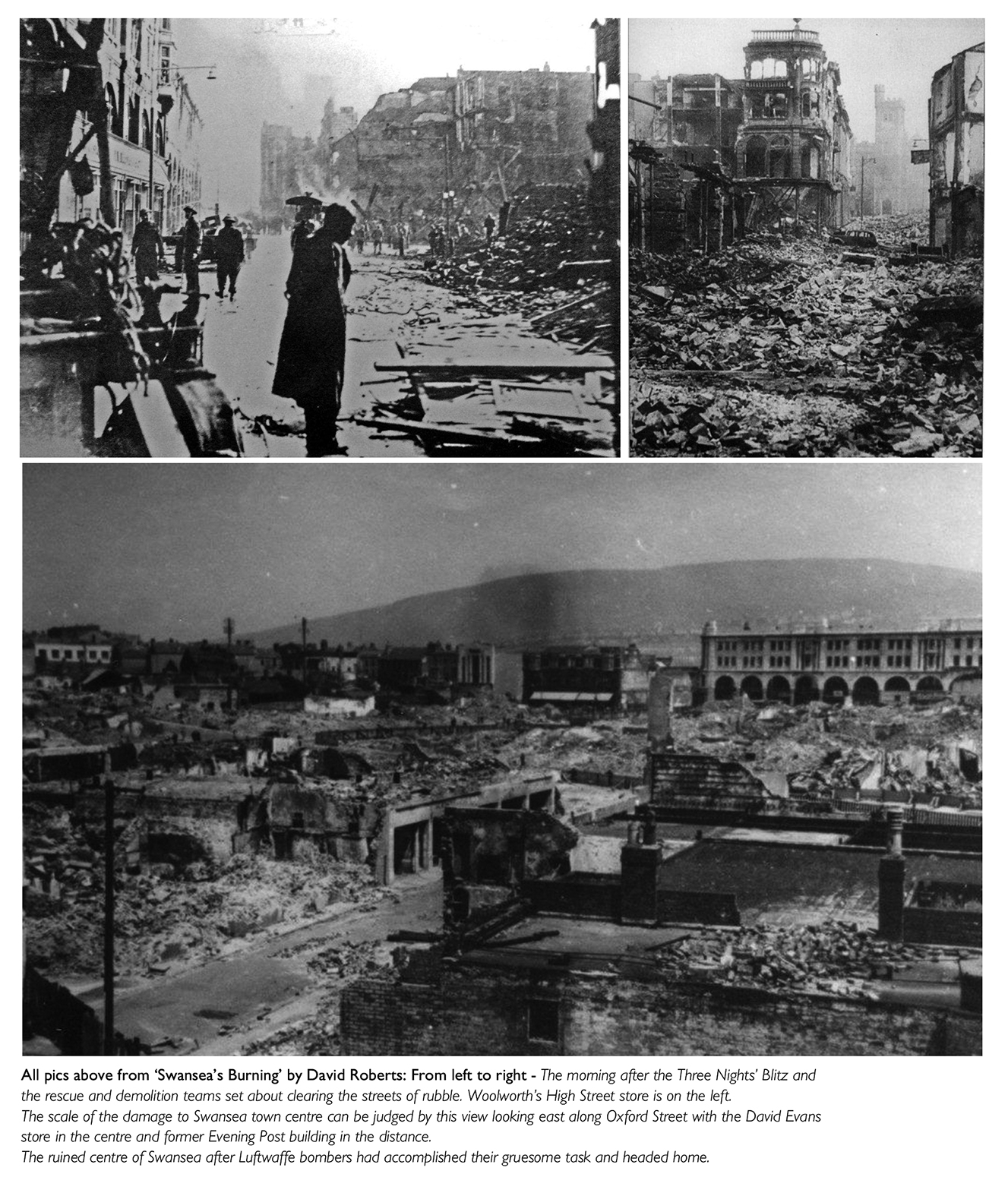 Bombing that occurred during the Second World War was known as The Blitz, from the German word Blitzkrieg – which translates as lightning war. It started in Britain in over 16 major cities on 7th September 1940 and lasted to 21st May 1941.  During this period, it was estimated that about 43,000 civilians lost their lives, ranging from the youngest being an 11-week old baby to a 100 year old Chelsea Pensioner. This February, marks the 75th anniversary of the Swansea Blitz.

In March 1939, distribution took place of Anderson-style shelters to private homes and 500 communal shelters in Swansea’s most populated districts. By the outbreak of war in September 1939, only 6,549 Anderson-style shelters, out of a possible 30,000 that were needed for Swansea, had been distributed. The population at this time in Swansea was 167,000 according to information gleaned from The National Register carried out on 29th September 1939, the most comprehensive survey to be carried out on the British population. The information that was obtained was used to create Identity Cards, which were distributed to everyone. The adult’s cards until 1943 had been brown, after this date they were blue in colour. Children under sixteen had their cards kept by their parents. The information from the National Register was released in 2015, only identifying those people who have died at the present time. Those still alive have been omitted.

The first 9 months of the Second World War from September 1939 to April 1940 were known as the Phoney War as there appeared to be very few signs that Britain was at war. The first air raid on Swansea was on June 27th 1940. It was reported in the South Wales Evening Post “German bombers again visited Britain during last night and early today (June 27th). A Welsh town (Swansea) had its first air-raid early this morning”.  During the bombing at 3.30am, six High Explosive bombs (HE) had been dropped on Danygraig Road, St. Thomas, and a further four had been dropped on Kilvey Hill, which actually failed to explode. The only damage was caused to a house, occupied by Mr and Mrs. W. E. Rees, and their 5 year old son, Neville. 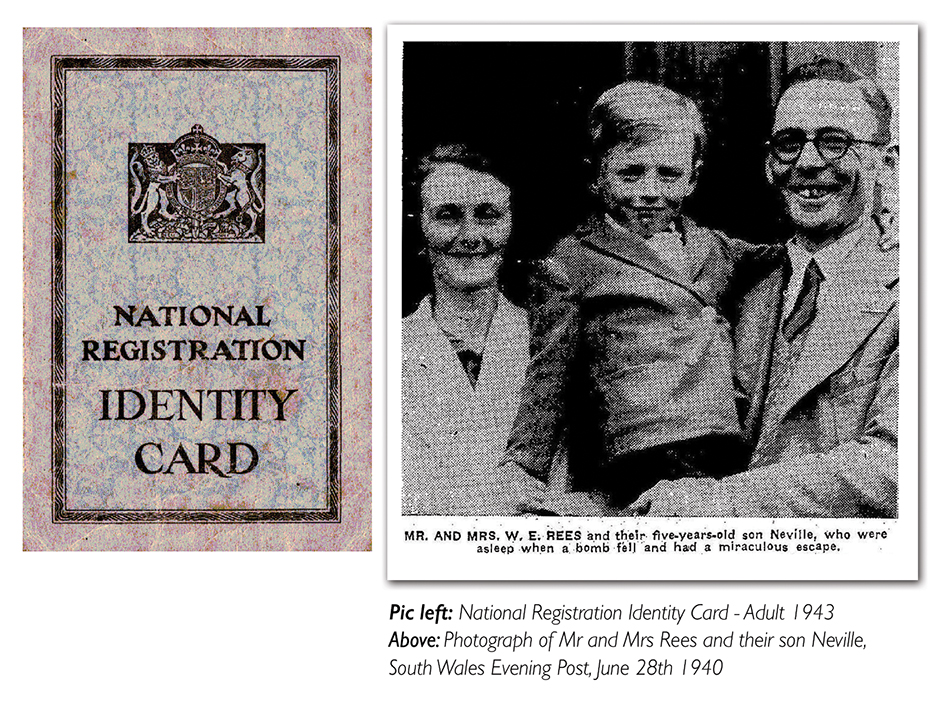 “We were all asleep in the middle bedroom, but were awakened by a heavy thud and a noise as if a wall had collapsed. I found the front room full of dust. Our little boy slept through it all, and we had to wake him up. There was no explosion.”

It would be really interesting to know if anyone remembers Neville Rees, and if he remembered that day in June.

At the time of the bombing, Swansea A.R.P. Officer, Mr. E. J. Brayley issued a warning to the public, that in an air raid, the first action was that the public should get under cover.

During July and August 1940 there were further bombing raids over Swansea. September 1st 1940, was the largest raid over Swansea to date. 251 HE bombs plus over 1000 incendiaries were dropped over a large area.  115 people were injured and 33 had been killed.

February 19th-20th-21st 1941, is known as the Three Night Blitz. The bombing over the three nights lasted for 13 hours and 48 minutes. The Luftwaffe dropped over 896 HE bombs, when the town of Swansea was obliterated. 397 people had been injured and 230 had been killed. One of those killed was Ernest Woollard, a distant cousin of mine, who lived in Watkin Street. On the last night of the bombing, he ventured out of the house to see what was happening. Unfortunately, he was hit by shrapnel. He returned to the house and a neighbour was asked to call for the doctor, but by the time the doctor arrived Ernest was dead.

I have been in touch with Mr John Lewis of St Thomas, who gave me his recollections of the bombings when he was a small boy. Mr Lewis told me that there was a large shelter situated under the railway arches by the Bridge Inn, in Bridge Street, also a shelter on the opposite side of the road under the arches of the Midland Station.  A further shelter was located at the junction of Morris Lane and Kilvey Terrace.

At the time of the Three Night Blitz, Mr Lewis remembered that a land mine was dropped, exploding at Fabian Street, destroying the Miers Arms and Chile Public Houses.

Mr Lewis also remembers a French plane, which was being flown by the Germans, strafed along the Mole, King’s Dock, where twelve men were killed. He remembered in particular a Mr Quinn and Mr Stiens, both 40 years old and from the St. Thomas area. A Miss Slattery was also wounded and later died from her injuries after she was hit by shrapnel. A nearby wall still bears the shrapnel marks.

What about those who died? At the time, the County Borough of Swansea provided the names of those who had been killed and where they lived, to the Commonwealth War Grave Commission. They produced a Civilian War Dead Roll of Honour located in St. George’s Chapel, Westminster Abbey. There is also a register of Swansea Civilian War Dead, which is located in St. Mary’s Church. The Commonwealth War Grave Commission also lists the other Swansea civilians who have died in different parts of the county or on board various vessels.

Charles is a researcher and family historian. Do get in touch if you need help in finding out more about your ancestory.  His email address is swanseafamilyhistory@yahoo.co.uk and if anyone would like to contact him, he would be delighted to help with any enquires.